We’ve spent the past two nights next to the very small airport in Tillamook, Oregon at the Port of Tillamook Bay RV Park. Not much to it, $10/night for just dry camping in an open field, but it’s quiet and in a good location for exploring the area. Thanks to Suzanne for recommending it. 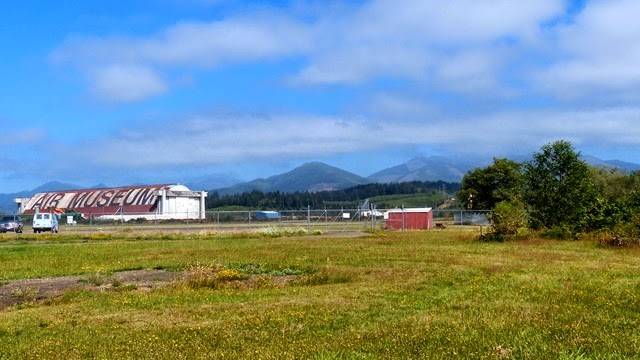 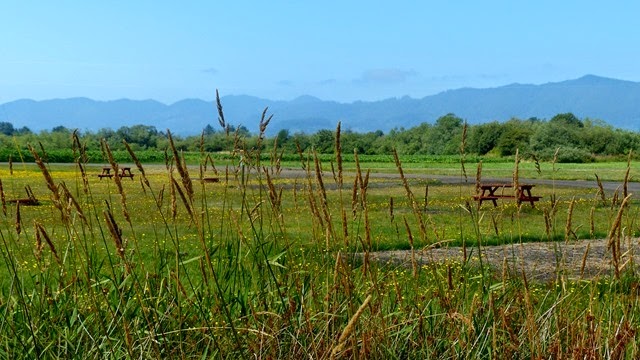 We didn’t make it to the Air Museum, although I’m sure it would have been interesting if it’s anything like the one we had in Pensacola. But the weather was just too nice for indoor activities.

On the day we arrived we picked up Jim’s new sunglasses that were awaiting at the post office and looked around Tillamook. This is dairy farm country, which gives the place a not so pleasant odor much of the time. Being non-dairy eaters we didn’t visit the famous Tillamook Cheese Factory, either, but we did stop in to look at the more upscale Blue Heron French Cheese Company, which also sells wine, beer and fancy foods and gifts.

From there we drove seven miles south of town to Munson Creek Falls, falling over 300 feet and one of the tallest waterfalls in the state. 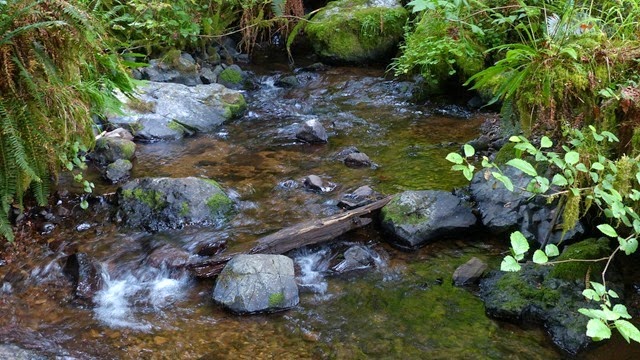 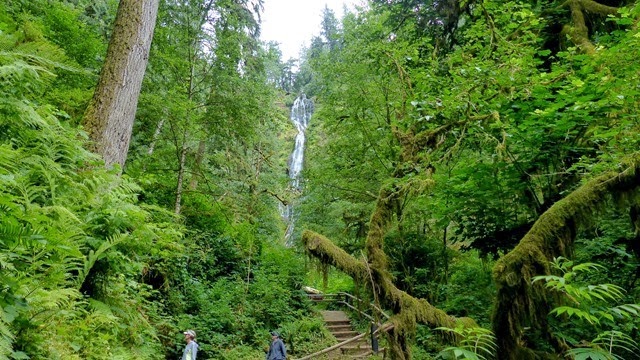 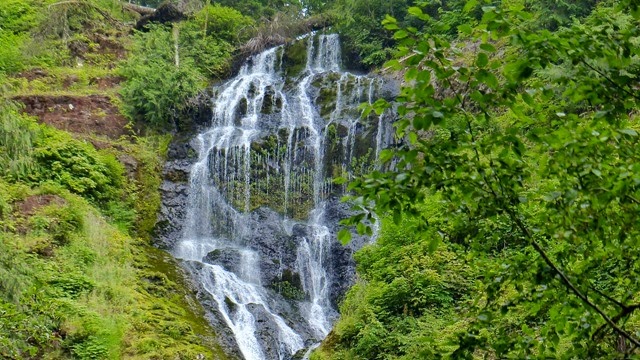 Yesterday we spent the afternoon along the Three Capes Scenic Loop, a lovely drive through several coastal communities and parks with plenty of places to stop and take a little hike.

Jim wasn’t so impressed with the Big Spruce. 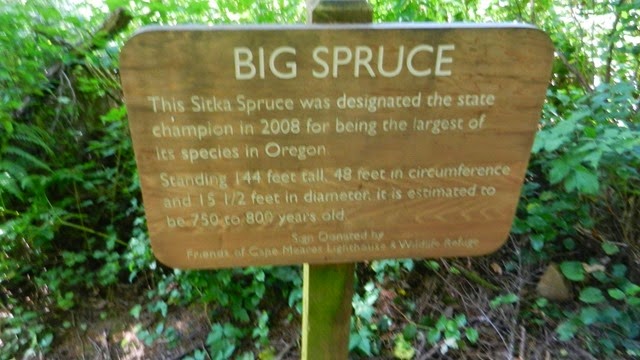 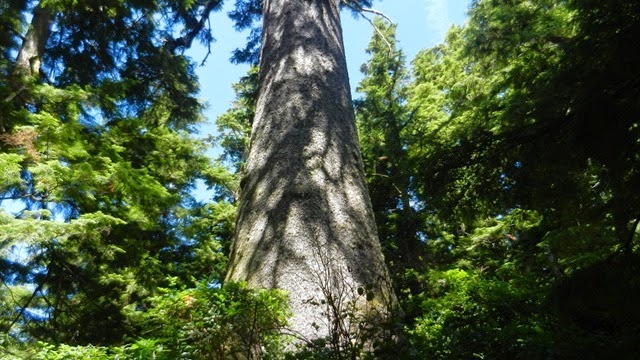 But he did like the Cape Mears Lighthouse, Oregon’s shortest at 38’. 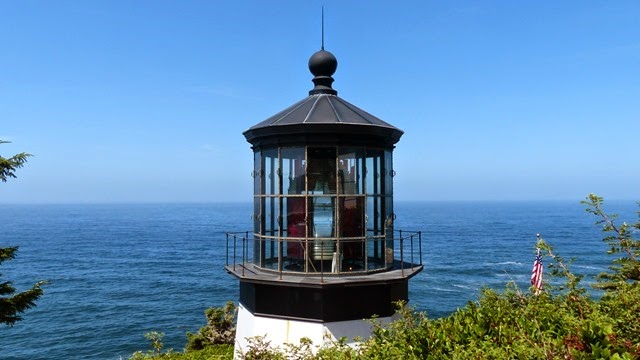 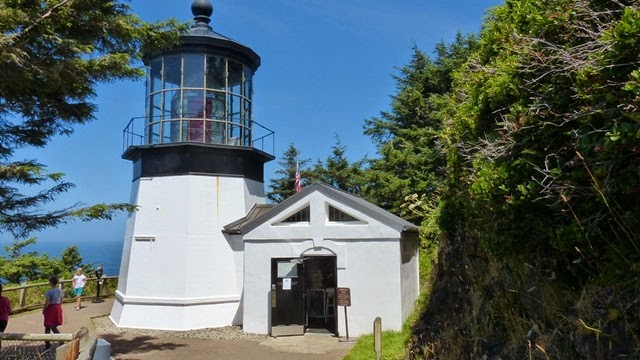 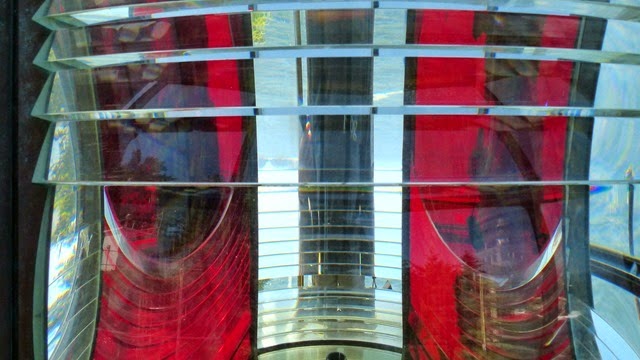 I always wonder if the lighthouse keepers appreciated the views like we do, but with only about 100 clear days per year I suspect they did. 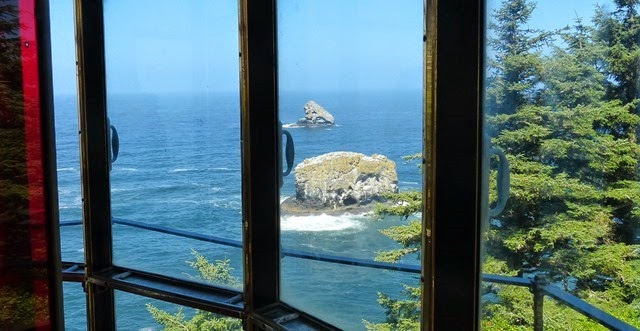 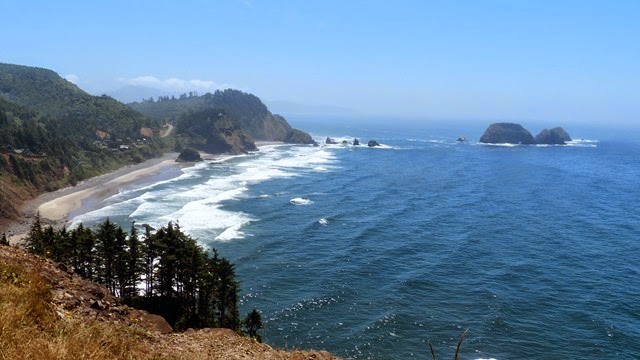 We got excited when we read that there was a colony of Tufted Puffins on the rocks so we spent some time with binoculars looking for them. We later learned that eagles ran them off, but they could now be found at Pacific City, the southernmost town on the scenic loop. The hunt for puffins continues. We did spot Common Murres on the rock ledges. 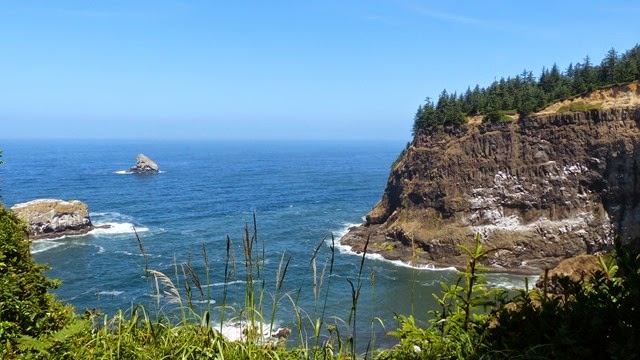 Nearby is a trail to the Octopus Tree, another huge 250+ year old Sitka spruce with multiple trunks. 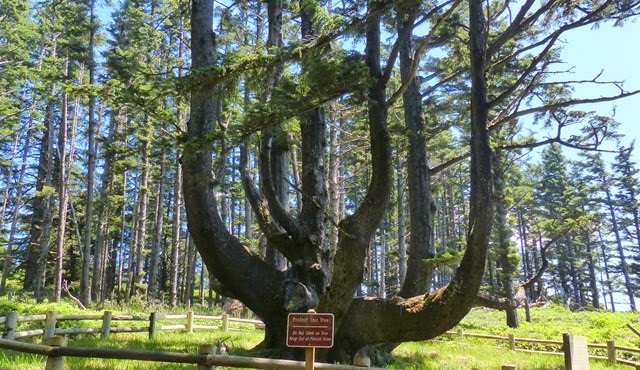 Next stop, the beach at Oceanside. 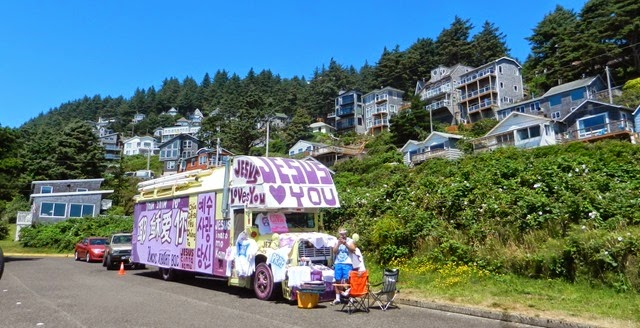 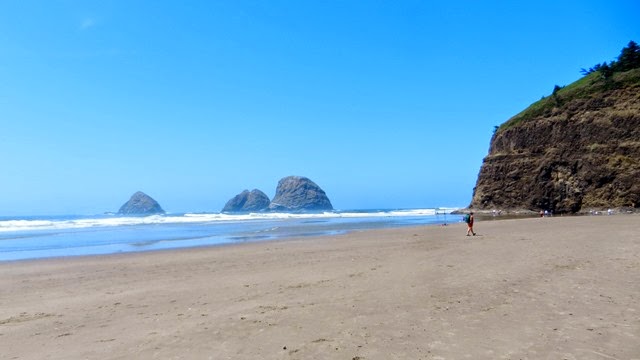 Cape Lookout, where we hiked a trail to, you guessed it, a lookout. A couple women coming back up the trail said they saw whales in the water, so we had something new to look for. 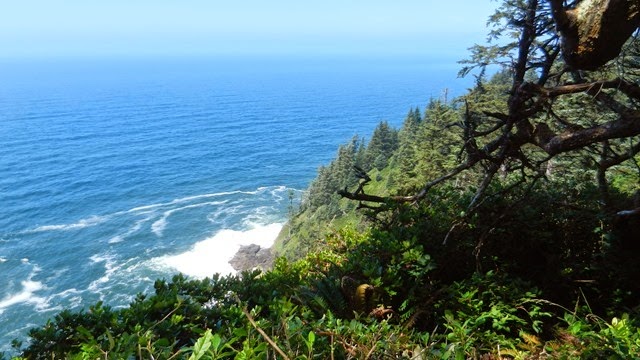 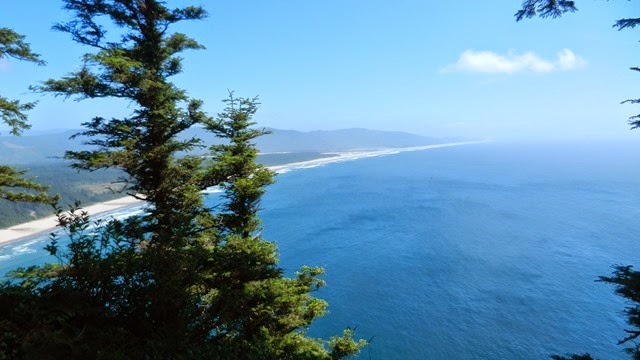 We had no luck spotting whales, but did see this dead tree that looked like an open can of Pillsbury biscuits. 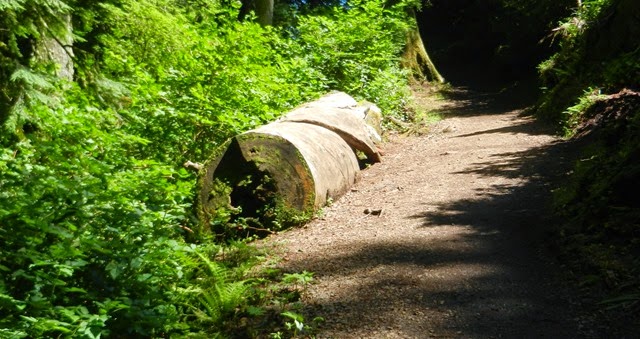 And a shiny colorful mushroom/ 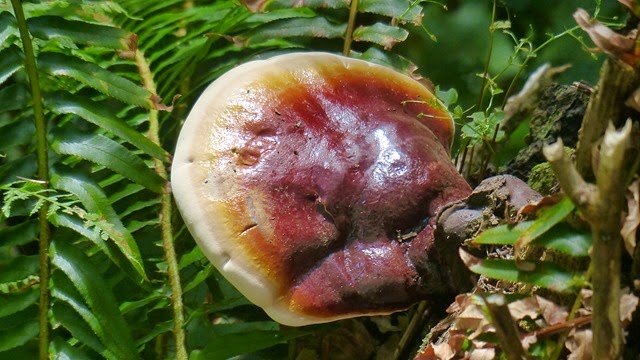 Last stop, Cape Kiwanda, at Pacific City, where we drove on the sand for a short distance before we were afraid we might get stuck. I’m not a big fan of allowing vehicles on the beach, but when in Rome, you know. 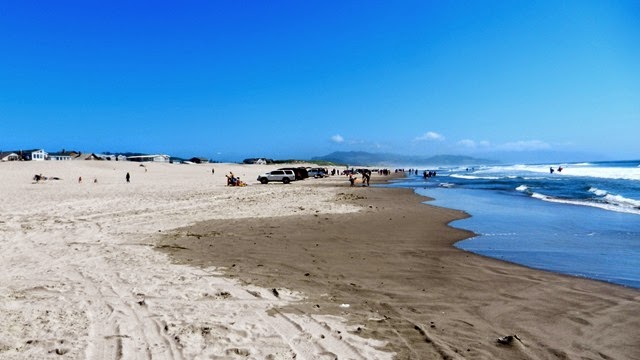 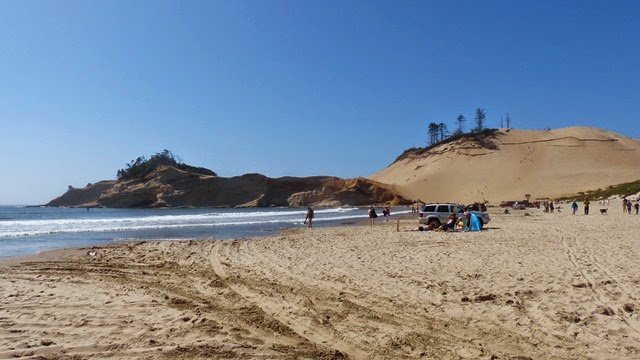 Haystack Rock, with me still looking for puffins and whales. 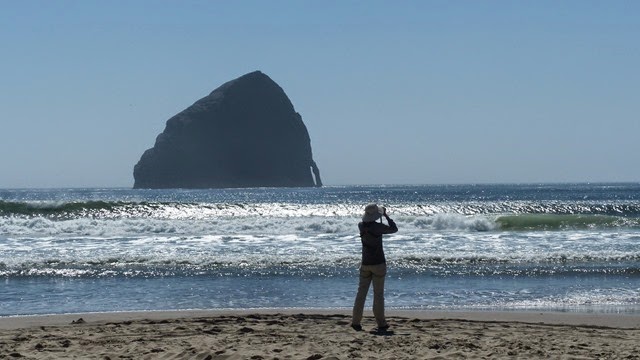 No sighting of either but it was a good day, anyway. 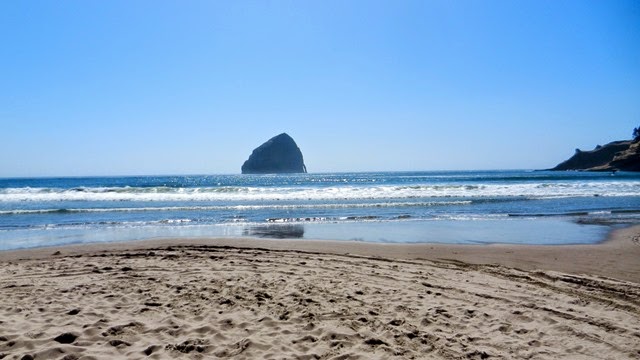 We did see this cute little puppy that looked like a cross between Rupert and Elliot, Debbie’s two dogs. And yes, that is a dead watermelon on the beach. 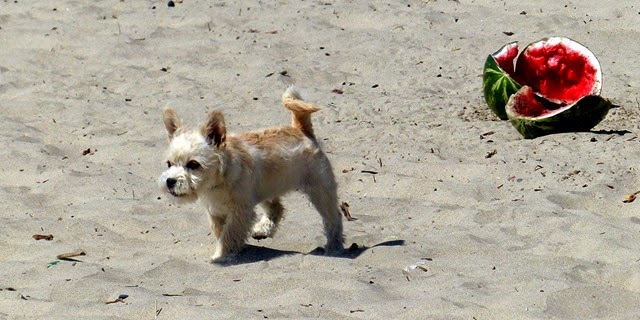