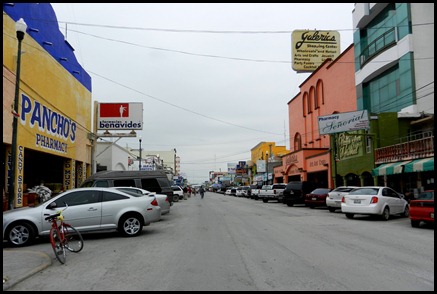 We had an uneventful trip to Mexico this morning, 35 miles to the International Bridge which connects Progreso,TX to Nuevo Progreso, Mexico. Parking on the Texas side is $2 and there is a 25 cent fee to get through the turnstiles both entering and leaving Mexico.

The Rio Grande from the very impressive covered pedestrian bridge. 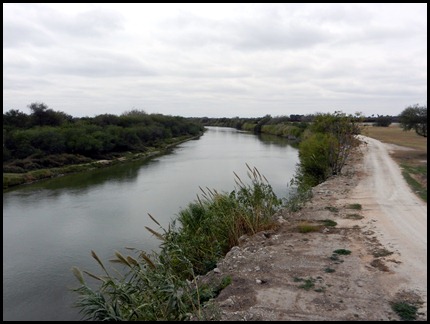 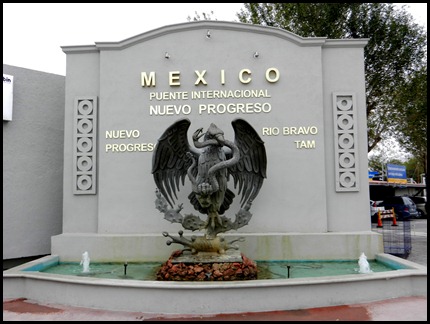 We had to walk about a block and a half to the dental office of Dr. Mustre, passing probably a dozen other dentists, pharmacies, shops and street vendors along the way, all trying to lure us into their place of business. When we walked in we were surprised to see a nearly full waiting room. I counted 25 chairs and there were only a few vacant seats. Jim struck up a conversation with the woman next to him, whose husband was having his teeth cleaned. They have been going there for years and were very pleased, which made Jim feel less apprehensive.

As it turned out, all went well, Jim’s tooth was prepped and a temporary crown put on, and he has to go back on Dec 27 for the permanent one. They said if it comes in sooner they will call, but as busy as they are he doubts that will happen. While he was being worked on, I went next door to the orthodontist and got a new upper retainer made, which I picked up 45 minutes later.

It was a very cold (barely 50), gray, windy day, so we just walked up and down a couple blocks and looked around in some shops. I love the colorful Mexican pottery and glassware they sell, but it’s heavy, breakable, and we have nowhere to put it. Jim’s mouth was still numb, and the few restaurants we passed didn’t have anything on the menu we would eat anyway, so we didn’t spend much time. If the weather is better when we go back we will do a bit more exploring. Nuevo Progreso is definitely the cleanest and nicest border town we’ve been to and we felt perfectly safe.

I always get depressed when we go to Mexico because years ago I was fairly fluent in Spanish. Now I barely understand a few words when I eavesdrop on conversations. They speak way too fast!