We Moved But Didn’t Go Far 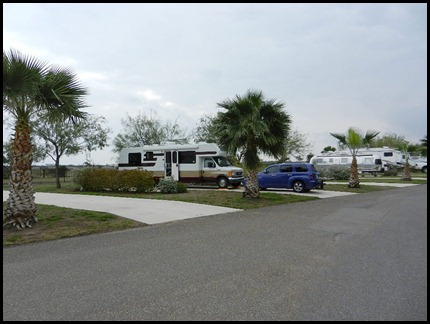 In fact, we’re just 12 sites away from our first site here at Bentsen Palm Village in Mission, TX. Last week we decided to ask about staying another month or two, but were told there was a waiting list. They left us with the impression that there wouldn’t be a chance of getting a site. After talking to several people, they suggested we make pests of ourselves in a nice way and go to the office often to check for cancellations. They took our name a few days ago, and then yesterday said they had a site for us for January and February. We thought we’d be moving the first of January but since the site is open now they said it would be easier for their record keeping if we just went ahead and moved now, which we did. 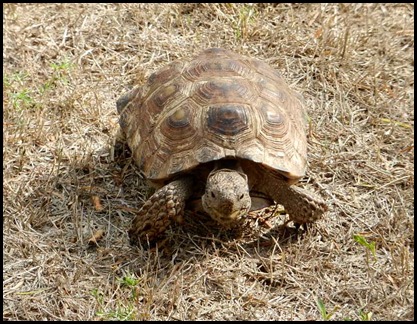 It’s funny since we usually avoid private RV parks, but we really, really like it here. We just feel very comfortable and are enjoying the new experience of getting involved in activities and meeting people. Now we understand why many people leave the cold northern states and Canada and stay 4 to 6 months in the same park every year. We are already thinking we’ll come back next year.

Finally got a not very good picture of a Kiskadee. 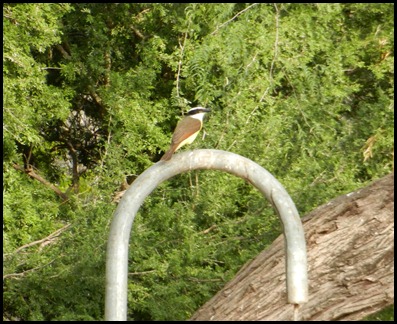 After spending the past three winters in southern New Mexico, Arizona, and California, we came to realize it isn’t very warm in those states during the winter. Plus we were tired of the wind and blowing dust in the southwest, although we love the desert scenery and mountains. So it was south Florida or south Texas, and here we are. The Rio Grande Valley isn’t very scenic, but we are in a great location for walking and biking, the park is lovely, the people are friendly, and it is a mainly younger, active group of people staying here. And yes it gets windy here, too, but at least you can go outside without eating dirt.

The other day when we thought we’d have to leave on January 1st, we drove around the valley looking at other RV parks with fitness centers. We found two that were okay but more expensive, but most of them were awful in our opinion. So we’re happy to be here awhile, and hope to use the down time to get some things done.

The serious birders have some big lenses on their cameras. Lots of Christmas lights at our neighbors across the street. 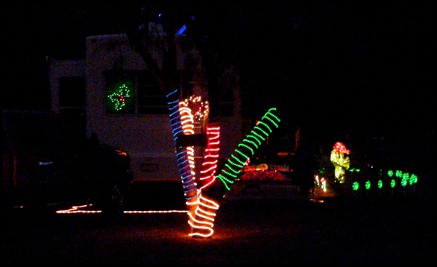