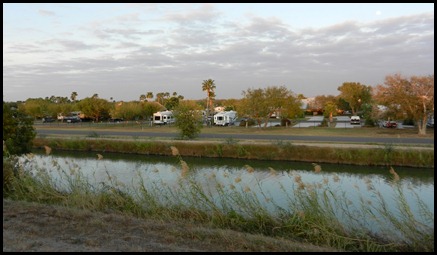 Staying in one place for awhile always gives us (well, me, anyway) the urge to get some projects done. I’ve been trying to get Jim to build a clothes drying rack out of PVC to hang on the ladder for a couple years now. He even got a copy of a plan from a fellow RVer we met ages ago, but whenever I mention it or come across the paper with the plans on it, he always has some excuse why he doesn’t want to attempt it. Might have something to do with his lack of confidence in his ability to do things like that, since they usually take much longer than anticipated, and involve some sort of bodily injury.
Fortunately, the drying rack turned out to be an easy project. After looking at several here at the park, we decided how much PVC and how many elbows we’d need, went to Home Depot, got our pass for the woodshop (after signing a release), and got to work. They have a wonderful woodshop here at Bentsen Palm which anyone can use, and it is supervised by volunteers so if you need help with any of the equipment, someone is always available.

The finished project, no fingers were lost, not even a scratch (with those power tools, you never know!) 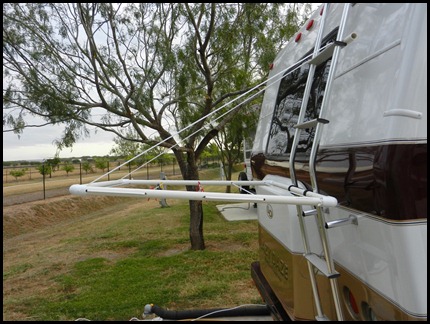 I forgot to mention last month when we were in Pensacola, I finally got Jim to install a small computer fan in the refrigerator. We’ve been using a fan from Camping World but it didn’t blow much air, and we’ve gone through lots of D batteries the past few years. He was apprehensive about doing it since he had to wire it into the light. He drove our friend Don crazy emailing him with questions about how he installed his, since he kept thinking when the door was closed the fan would shut off, just like the light does. Don finally told him to just do it and see what happens. Well, to Jim’s surprise the fan stays on, and it blows much more air than the one we had. And no more buying batteries. He just zip tied it to the top rack above the light so it’s not in the way. 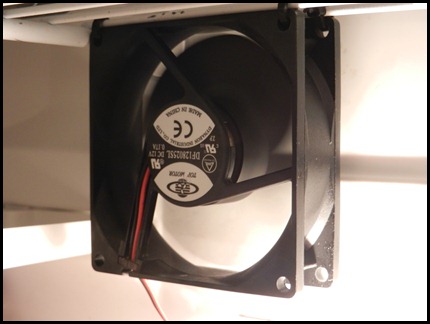 They also have a nice craft room here, and a sewing machine for anyone to use, so I bought some fabric to make new kitchen curtains. May as well take advantage of everything we can, but that project is on hold for a rainy day.

On our walk last evening in the state park, a birder was looking at something through his scope, so we walked over to see what it was. There was a beautiful red-shouldered hawk in a nearby tree. He let us look at it in the scope, which was great. Unfortunately our little 18x zoom didn’t do a great job. 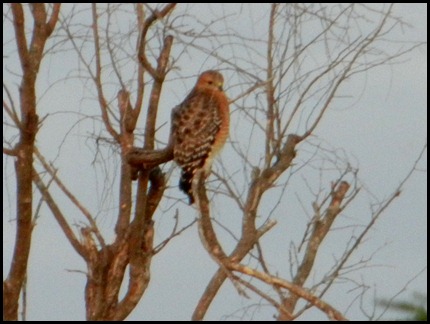 Time to go see if I can find something else for Jim to do. Since he’s saving so much money on his tooth, he ordered a Kindle. Once that gets here I will probably have a hard time getting him to do anything!