It Was Our Lucky Day

We arrived at Flag Tool and Engine Repair just before 8 this morning, and it took about 10 seconds for the mechanic to diagnose the generator problem. The adjustment nut from the choke was missing. It most likely fell off along the couple miles of washboard road we drove on to get to our last campsite.

It’s the nut in the upper right that was gone. With the nut missing, the metal plate under it could move and cause the choke to function improperly. 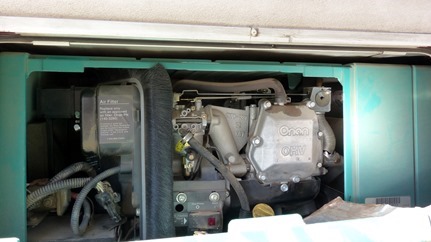 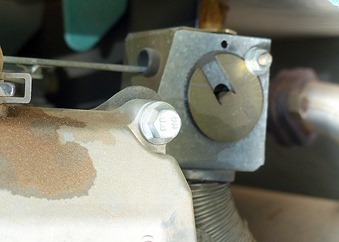 Because a common cause of generator malfunction in certain years of Lazy Daze is a cracked fuel line from the generator to the gas tank, we were afraid that was the problem. The repair involves dropping the gas tank and is not an inexpensive job. Jim asked the mechanic to test the fuel pump flow and pressure, which all checked out fine.

We were happy to get out of there with a bill of $119, which included a new air filter and spark plug to have on hand, since they aren’t always easy to find. By 9:15 we were back on the road, stopped at Wal Mart for a few things, then on to the Giant station to dump our tanks and fill the fresh water.

Our 14 day stay limit (within a 30 day period) would have been up on Thursday, the 4th of July. We really liked our site, but didn’t want to have to look for a new one on the holiday. The Coconino National Forest is very strict about enforcing the 14 day camping limit, and unlike some national forests the policy is you must leave the forest for 16 days before you are allowed to return. The Kaibab National Forest is not too far west of here, but that would have put us farther from Scottsdale for Jim’s ophthalmologist appointment next Monday. We discovered that there are pockets of Arizona Trust Land within the Coconino, one small area being just about a mile and a half from our other campsite. And there are some beautiful places to boondock, so that’s where we are now. 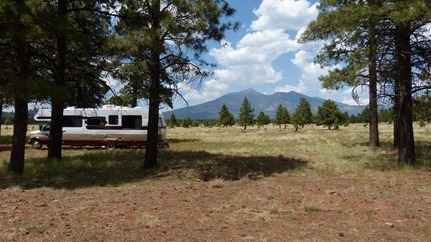 You have to get a permit from the state, so we mailed in the necessary form with a check ($15/person or $20/family) last week and picked it up at the post office on Saturday. We’ve been told it’s rare that anyone will come along and check, but it’s a small price to pay for this beautiful spot. And the stay limit is only 14 days per year. We’re hoping to see as much wildlife here as we did at the other site. 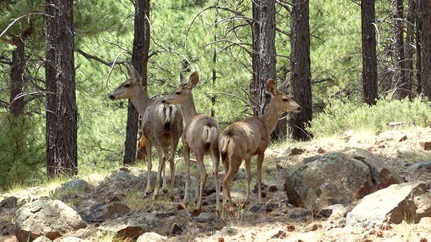 It was not a fun day for the cats, since they hate loud noises and moving, but Sophie somehow managed to relax after we got settled in. We hope to stay put for a couple weeks. 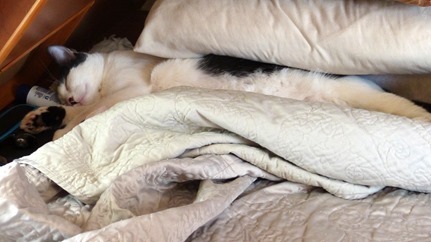