We arrived here Thursday afternoon hoping to beat the Easter weekend crowd. The park wasn’t even half full, and we got a great site with a view of the lake. In fact, looking back at pictures, it appears we are in the same site we had the first time we came here in January 2009. Quite a few groups of tent campers and families came in later Thursday evening and more came in yesterday. Glad we found a site with no close neighbors. Our internet connection is extremely weak and slow, so I am not going to post too many pictures.

It was 90 by late afternoon, but when I got up yesterday morning it was 47. Welcome back to the desert! This isn’t the most scenic part of New Mexico but it’s not a bad place to hang out for a few days.

We toured Carlsbad Caverns the first time we were here, but since it was so hot, we decided to go back and see it again. We did the self guided walking tour through the natural opening, which is free with Jim’s Senior Pass. but being Easter weekend it was much more crowded than the first time. 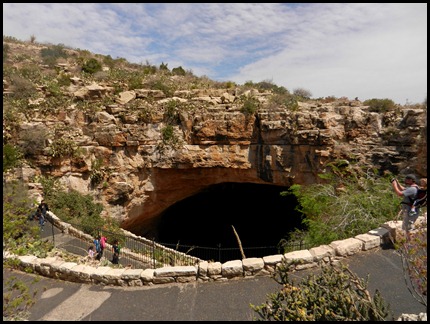 Jim was not real happy, since he doesn’t tolerate crowds ands kids very well. In fact he heard a ranger tell someone that Easter Sunday is the most visited day of the year.

They have these signs and phones every so often along the trail. Jim wanted to call and report all the “dumb asses and their kids” but that wasn’t on the sign. 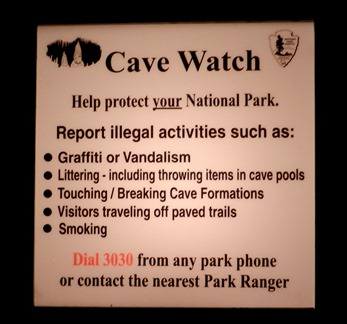 I’m guessing about 75% of the people we encountered in the cave did not speak English. Not that there’s anything wrong with that, but it’s always interesting to see how many foreign travelers come here to visit the national parks. And unfortunately we have found that they don’t always have the best of manners on crowded trails.

But at a cool 56 degrees it was a great place to take a walk for a couple hours. And it was just as fascinating seeing the caverns a second time.

I saw this when I opened the blinds this morning. The New Mexico Easter Bunny sure has big ears! 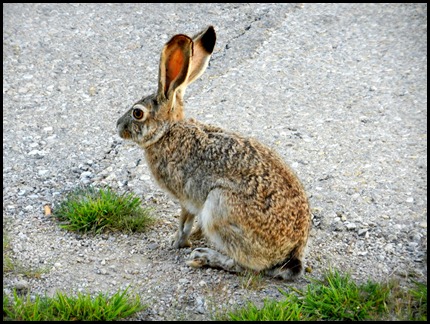