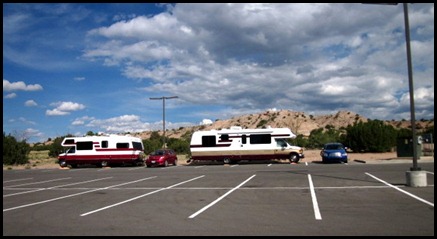 We’ve spent the past 2 nights in the RV parking lot at Buffalo Thunder Casino, 14 miles north of Santa Fe. The lot is adjacent to the golf course behind the casino and Hilton Hotel, so it’s well off the highway and very quiet. The only problem is it’s pretty sloped, so getting level was a bit tricky.

We were really impressed with the lobby and hallways of the hotel, which display local Native American artwork: pottery, paintings and sculptures. It’s like being in an art museum and very tastefully done.

Our first night here, we went into Santa Fe to have dinner with Bernie and Martha, another Lazy Daze couple we met when we were here 2 years ago. They just moved into an apartment downtown, so we parked in their lot and walked the 3 blocks to the Plaza for dinner at the Marble Brewery Tap Room/Rooftop Pizza. It was a very enjoyable evening.

Yesterday we went back to town for some shopping and a haircut. Later we took a walk on the 2.5 mile paved walking loop that skirts the north side of the golf course. They have quite a nice piece of property. 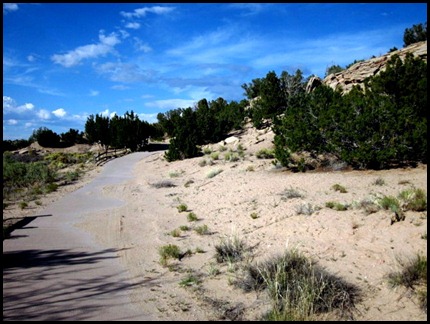 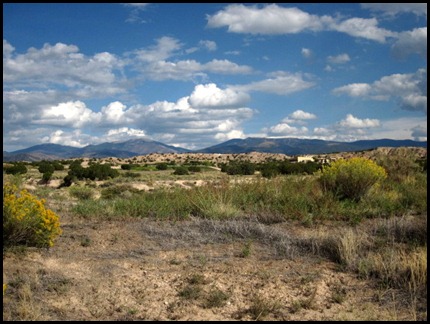 Today we moved on to Cochiti Lake. We could barely get an internet connection yesterday, so Jim spent the morning on the phone with Millenicom trying to figure out the problem. They determined it had to be a problem with the data card, so they were going to send us a new one. Now that we’re at Cochiti Lake, we have the fastest connection we’ve had in a long time, so he called and told them to hold off sending a new one for now. It’s all a big mystery to me.

Jim has us lined up to go to Albuquerque tomorrow to look at a couple of vehicles. We would love to find something with higher clearance before we get to Big Bend in October. I truly hate car shopping. Well, not the actual shopping itself but  the negotiating part, and I know I’m not the only one.