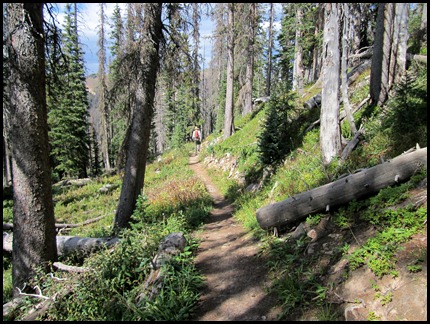 Yesterday Jim and I decided to go back up to Wolf Creek Pass to hike the Continental Divide Trail heading south this time. We went north with Chuck and Carla a couple weeks ago and it was a beautiful hike. Debbie was feeling a bit under the weather so she stayed home to keep an eye on the forts.

At the parking area by the pass we saw a red Lazy Daze. Nobody was around, but while we were trying to figure out which was the right trail, a couple on mountain bikes and a big dog came rolling up. Turns out their Lazy Daze was borrowed from a neighbor in Santa Fe. They must be really good friends! It was covered in mud, had scratches on the sides, and the step was bent (they complained about low ground clearance). Since they weren’t towing a car, they were taking it on all kinds of dirt roads to get to trails, even leaving it at a trailhead overnight to go backpacking. They laughed about all the cleanup and polishing they had to do when they got home. Hope they do it before the owners see it! They really liked it and said they had been on the internet for a couple hours the previous night researching Lazy Daze. Sounds like a future cult member.

We finally got started on the hike, beginning at 10,800’ and climbing 1,000’ in just under 2.5 miles to Alberta Peak. Of course the CDT continues on from there, but that sounded like a good distance for a day hike, and there was no rain predicted so starting after noon wasn’t a problem.

We hadn’t gone too far when a few of these birds started jumping from branch to branch, coming ever closer to Jim. It appeared they were used to people who must be feeding them, because Jim held his hand out and this one flew right to it. It quickly flew off when it realized he had nothing to eat, though. 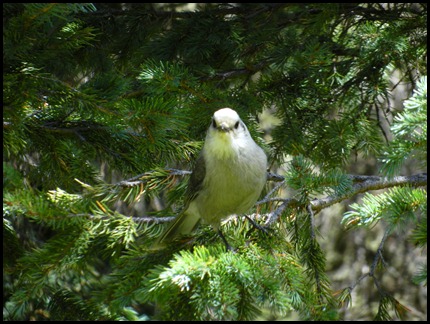 Farther down the trail we came to a rocky area, and saw this marmot with a mouthful of possible nest-building supplies. Jim was able to get closer and closer to it, and then it just laid down on a rock while he took pictures.

The animal whisperer at work. He also did a lot of talking to the picas, guinea pig sized alpine-dwelling rodents that squealed when we got near them. 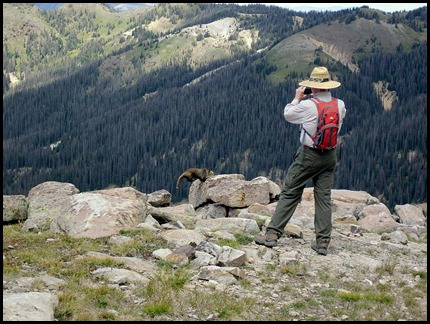 The marmot was a cute little fellow. 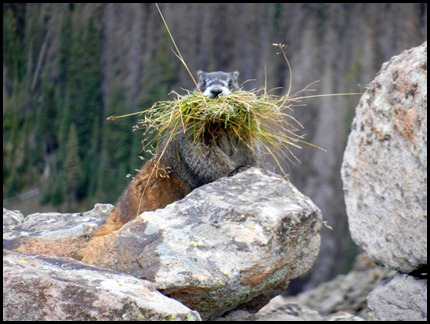 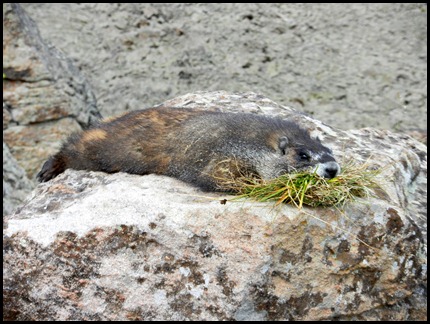 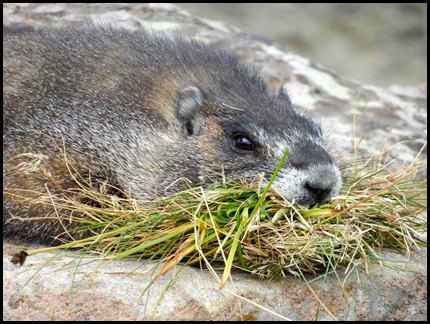 We continued on past the Wolf Creek Ski resort, a gradual but difficult uphill since we have resigned ourselves to the fact that we will never adjust to hiking at elevations over 10,000’, no matter how long we stay at higher altitudes. We lived at sea level in Florida way too many years! 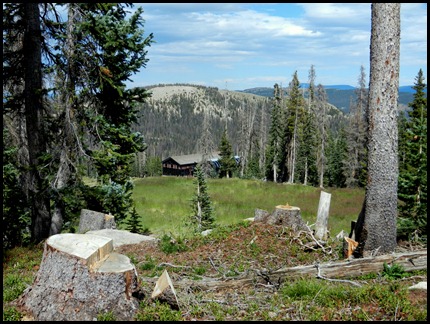 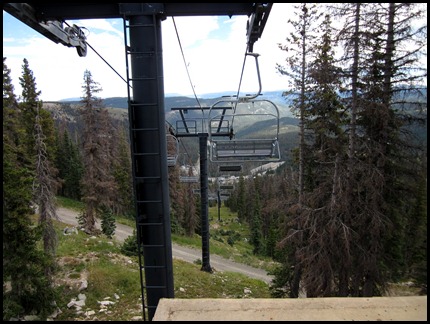 We could finally see our destination, Alberta Peak, not far off in the distance. It’s the hill on the far left. 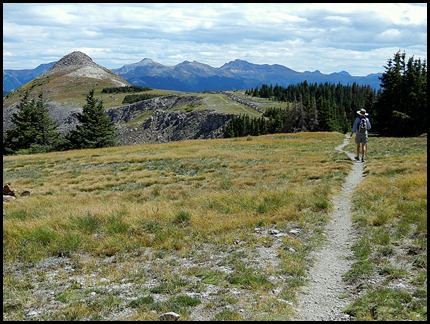 I read that there was no formal trail to the peak, but you could scramble to the top. I figured just hiking to the base would be good enough, close to a 5 mile round trip hike. But Jim just had to see if he could find an easy way up, and I couldn’t let him do it alone.

It didn’t look bad from a distance. 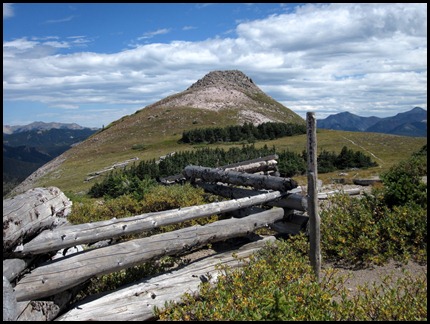 But it wasn’t the easiest climb up these giant rocks. 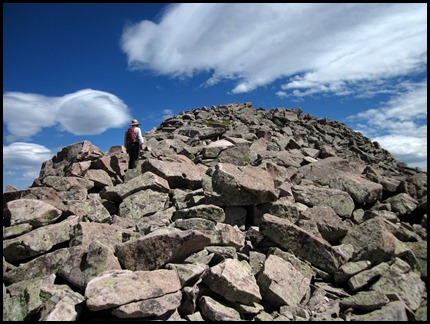 We both made it to the peak, but there was nobody to take our picture together. 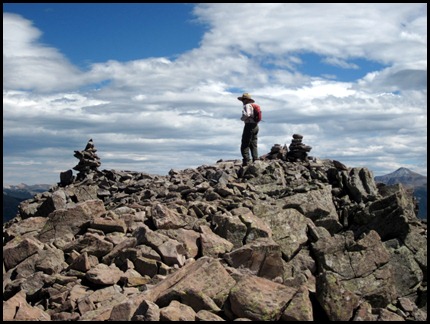 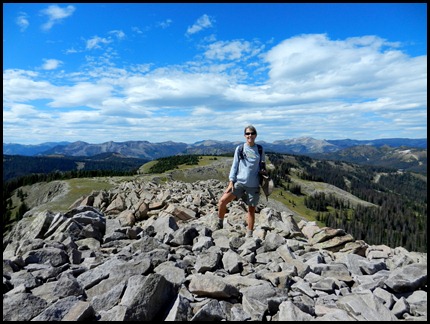 We sat awhile and checked out the landscape with binoculars before making our way back down. 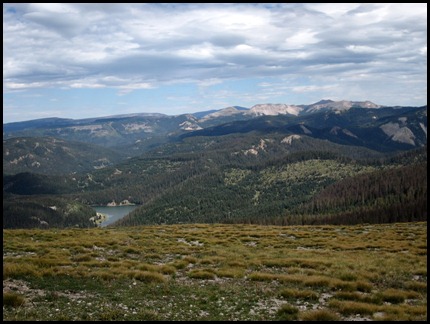 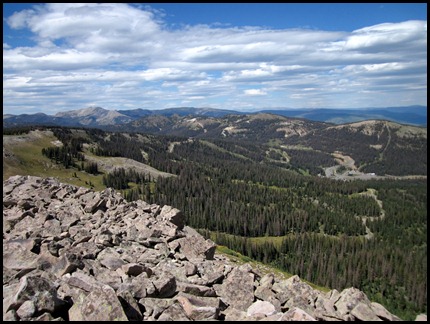 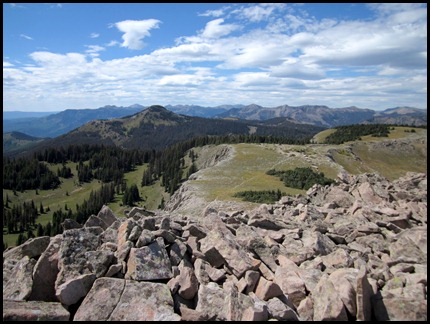 Feeling a bit uncomfortable going back down over the rocks, I found what I thought was a better, easier way down. Jim wasn’t so impressed with my path, but he followed in case I needed help. I was fine, since I did quite a bit of butt-sliding, but Jim stayed upright and complained the whole way down about my navigating down a much steeper side of the peak.

We did make it back safe and sound, though, and since we were so tired we treated ourselves to beer and pizza at Pagosa Brewing Co. It was pretty good pizza, not the best, but we were tired and hungry and somebody else did the cooking, so we couldn’t complain.

We are paying for it today with incredibly sore legs, the first time in a long time we have been this sore after hiking. My theory is we aren’t hiking enough, but Jim says he’s getting too old for this. I hope I never get too old to keep doing this. it’s what keeps me sane.