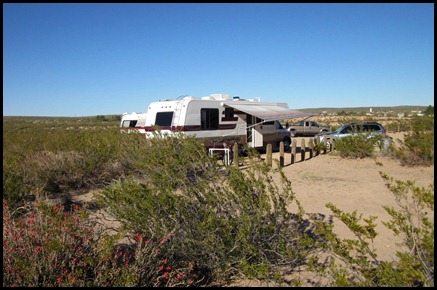 It’s been a busy and stressful few days here. We had loads of laundry and shopping to do, and Quincy was barely eating due to his dental issues. Jim took him to a local vet 2 days ago while Debbie and I were washing 2 weeks worth of dirty clothes. He was able to scrape off a large chunk of plaque from the tooth that seems to be bothering him, gave him a steroid injection and antibiotics, and told us to call yesterday to see if he was feeling better. He was able to eat without as much discomfort but was still obviously having tooth pain. He told us to bring him back this morning and if he felt the need, they would admit him for dental cleaning and probable extraction.

So we left him there at 8 this morning, came back to the park and moved to the primitive area, since the other sites were either taken or reserved for the weekend, and went for a hike. Just as we got back this afternoon we got a call that he was out of surgery and we could pick him up at 5:45. What a relief, although we must admit we both thought it might have been best if he didn’t survive the anesthesia. That would have saved us the grief of euthanasia we know is coming one of these days. Ah, the trials and tribulations (and expense) of pet ownership!

Haven’t taken many pictures here. This is more evidence of the drought they are experiencing. In April we were here and took this photo of Leasburg Dam and the Rio Grande from the trail. 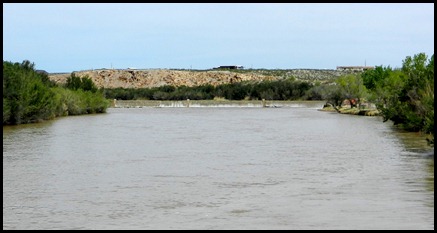 And how it looks 6 months later. The lighter shiny area is the only water left. This isn’t a great picture since we walked at sunset and it was taken with our cheapie Canon. Had to send the Nikon S9100 back for repairs again as the warranty runs out this month. Don’t buy one of these cameras! 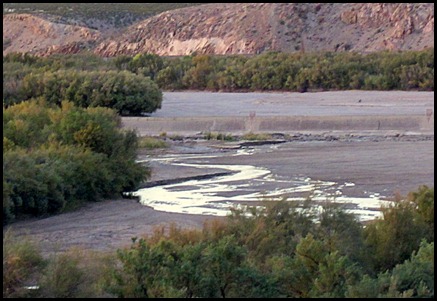 We arrived on Tuesday, which was Jim’s birthday, so we went into town that afternoon to pick up a few things at Sam’s Club, which just happens to be conveniently located across the street from Pizzeria Uno. So Jim got his pizza and beer, and I didn’t have to fix dinner.

There is lots of hiking in the Las Cruces area, but we didn’t have time for much this visit. We walked the park trails but they aren’t very long, and this morning went down the road to Dona Ana and hiked on BLM land just north of Las Cruces. We hadn’t been there before but it’s a pretty area and there are miles of trails and dirt roads. It is so nice to be able to drive on roads we were uncomfortable driving on in the Chevy. We really like the Forester! 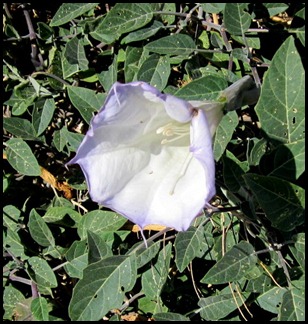 Yesterday we made a trip to Home Depot and Ace since we decided to make a home-made Protect-A-Tow. Our original one broke and blew off last year in New Mexico so we haven’t been using any protection for the car. Now that we have a new-to-us vehicle, we thought about replacing it but they wanted $160 just for the fabric part. We managed to find some sunshade fabric and bungee cord by the foot, and with the help of Debbie’s sewing machine made up a new one for under $30. Took almost all day but it was worth it. I’ll try to do a post on it one of these days.

If Quincy is doing well we are leaving tomorrow for a long drive to Marfa, TX, then on to Big Bend Sunday. No cell or internet there except at the Visitor Center, so we may be out of touch for awhile. In fact the first time we went to Big Bend in December 2008 our house was for sale, and we got an offer on it while we were there. We didn’t get the message until 3 days later, as our realtor was frantically trying to get in touch with us. Fortunately the deal went through and the rest is history.