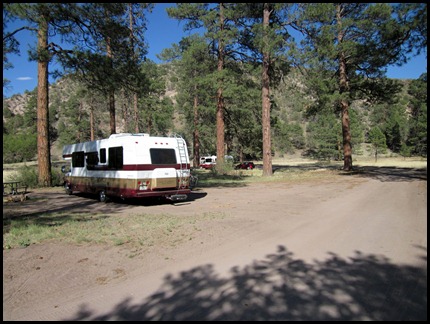 Our next stop after Glenwood was Apache Creek, another free campground in the Apache National Forest near Cruzville, NM. There was only one tent there when we arrived, which was surprising for it being a Saturday, but a couple other campers came in later in the day. It was awfully dusty but the sites are huge and was a nice quiet spot to spend a night. Of course the lone tenters had an ATV and a truck, and must have driven by our sites a dozen times. The ATV we could understand, but not sure where the truck kept going, as there was nothing around other than a small convenience store. Guess life is good if that’s all I have to complain about!

We took a walk and met a man and 2 dogs who live on a private road just past the campground. He told us where there was a hiking trail down the road, so we headed off in that direction. It was a mile long interpretive trail that climbed a hillside to a big rocky ridge with some ancient rock art. 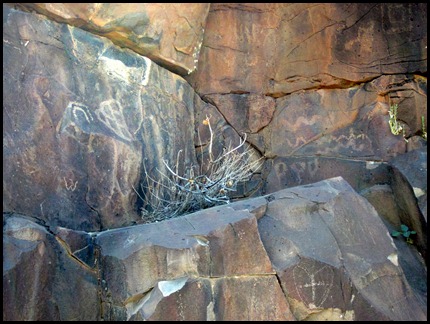 There were lots of squiggly lines, so maybe they just let the kids draw on the walls for fun. 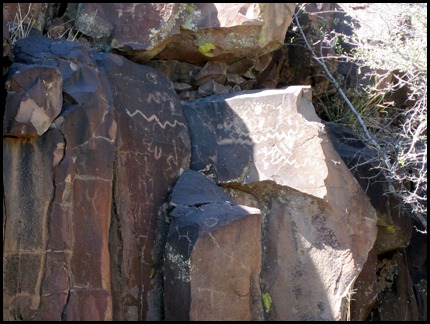 It was a nice hike, although a bit rugged in spots. 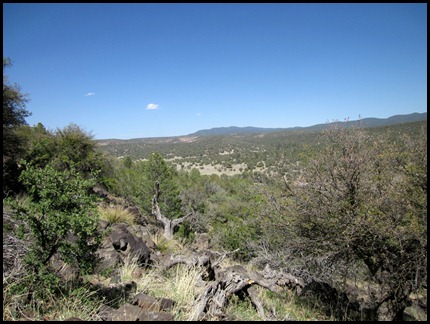 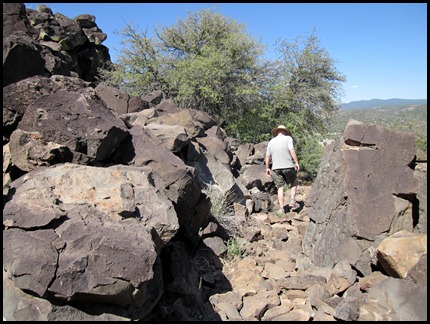 Actually the most interesting part  was this skeleton we saw at the trail head which appeared to be a dead horse. You never know what you might find on a hike, but we’d prefer to see live animals. 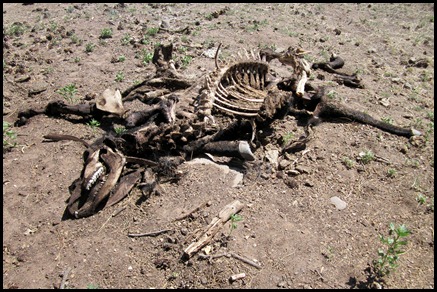 The elevation here is 6400’, so it didn’t get quite as hot during the day, but it was 34 outside and 49 inside when we woke up the next morning. I turned on the Wave 3 catalytic heater, then the furnace to warm things up. It had been a very long time since we used the furnace, and it would not stay on or blow warm air. Nothing Jim likes better than having to deal with a problem early in the morning! After reading the manual and not finding help, he searched his Lazy  Daze folder and found something about a sail switch, which may get stuck due to corrosion. He turned it on again and this time we heard the propane ignite and we had heat. It’s always nicer when problems resolve themselves.

By the way, this was day 5 with no phone or internet, also no TV. This part of New Mexico is really a dead zone, but it is so beautiful and peaceful we didn’t care.