Meeting of the Minds

An interesting thing that’s happened numerous times since we’ve been on the road is meeting other bloggers. We don’t intentionally seek out these people and hunt them down, but if we see that a blogger is in our area, I don’t hesitate to contact them and arrange to meet. And we have had people do the same with us.

The other day I saw that Randy from Mobile Kodgers fame was near Silver City with several other boondockers, parked in the Gila National Forest. We exchanged a few emails and decided to try and meet up in downtown Silver City during the Tour of the Gila criterium races. After one of our hikes a couple days ago we thought we might be close to where they were parked, so we went exploring on a couple forest service roads. We didn’t come across any areas where there was boondocking, and were about to turn around, when we spotted a group of RVs. Sure enough, it was them, so we stopped to introduce ourselves. We felt a bit funny intruding on their space, but they made us feel welcome and we had a great visit.

As of now there are four people in their group, with four more expected to join them soon. From left, Jim, Debbie, Lynn, Laurie, Randy and the elusive Boonie, the other famous blogger. His blog, Occupation of Independence, can be quite thought provoking. Both Boonie and Randy have been full time RVers for many years. 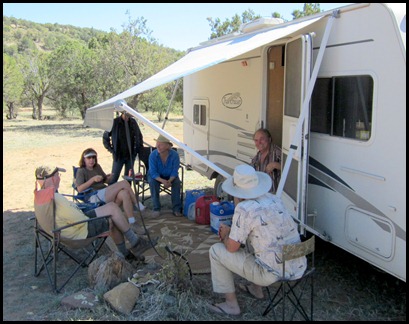 We spent a couple hours of stimulating conversation, and were treated to two songs by singer/songwriter Laurie Theodorou, who just released her first CD.

As much as we enjoyed meeting the Community Caravan group, the highlight of the afternoon was getting to meet Lynn’s new Corgie puppy, Rain. We all thought she had to be the cutest dog ever! 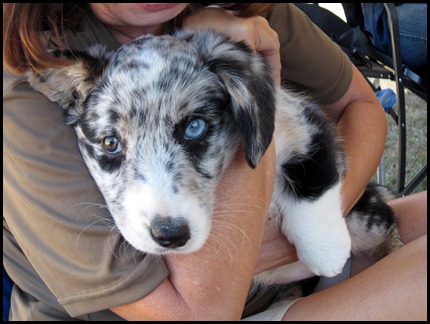 Thanks for the hospitality, and we hope to meet up again somewhere down the road. (Sorry, Boonie, the “net of doom” will have to wait for another time.)