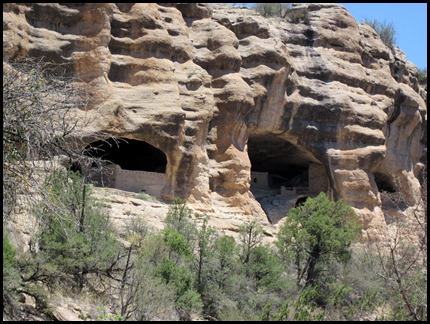 Over 700 years ago these caves in the mountainside were built and inhabited by the ancestral Mogollon peoples. It must have been quite a feat to construct their elaborate living, working, and gathering spaces in these mountain caves. Fortunately for us the National Park Service has turned the area into the Gila Cliff Dwellings National Monument, so we have the opportunity to explore the caves and learn about their history. There is one guided tour per day at 1pm, but you can get a brochure and explore on your own. Admission to the park is $3 per person or free with the senior or regular park pass. There is no extra charge for the tour. The dwellings are located at about the halfway point of a mile long trail. First you cross the Gila River, then after a gradual climb the ruins come into view. 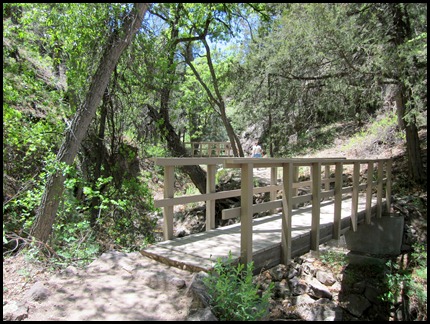 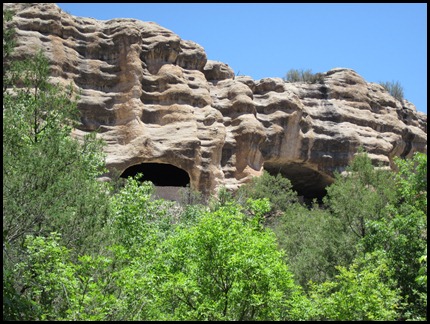 From there on it’s a pretty steep climb the rest of the way. This is an absolutely gorgeous area. 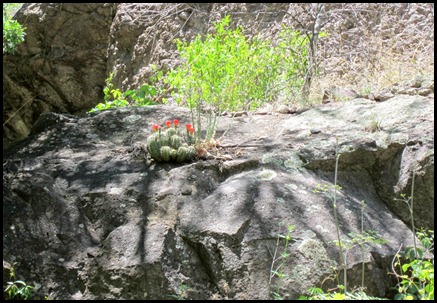 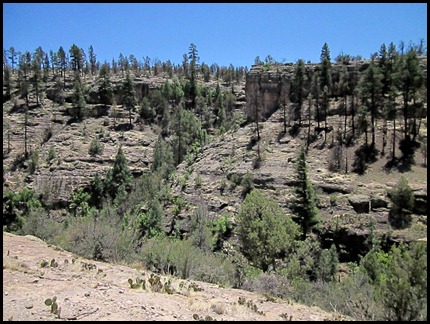 Not a lot is known about the Mogollon people, but with carbon dating of the timbers used for roof supports, the dwellings were estimated to have been constructed during the 1280’s. 80% of what is left of the dwellings is original. Most of the other 20% was done for repairs, not reconstruction. 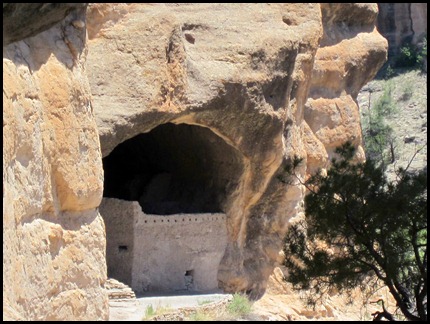 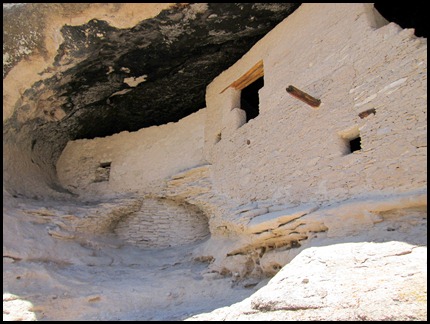 When archeologist Adolph Bandolier first reported about this area in 1884, he wrote that vandals and relic seekers had burned down roofs, broken out walls, and removed most items from the various rooms so nobody is sure exactly what all the rooms were used for, most likely storage, residences, and communal gatherings. 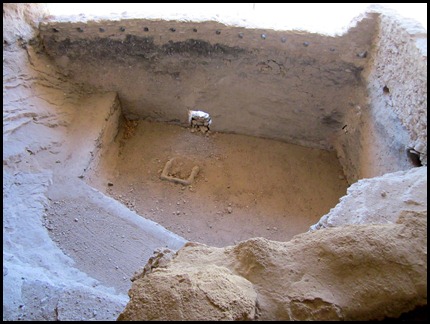 There was lots of soot on the cave roofs from fires. 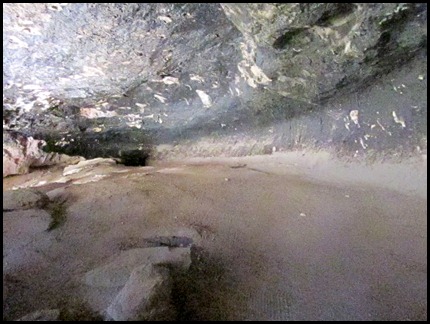 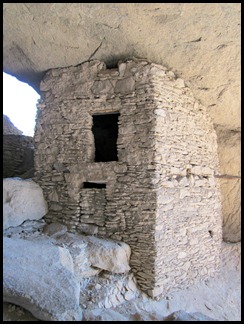 You can’t see it but the bowl contains 700 year old tiny corn cobs, as they grew corn, beans and squash, probably down along the river bed. 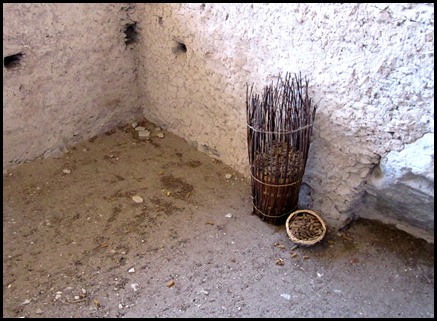 Here are a few more photos. There were even a few pictographs. The park service has tried to erase or cover up some of  the modern day graffiti found on the walls of the caves. 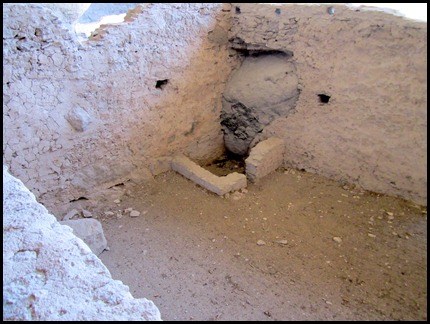 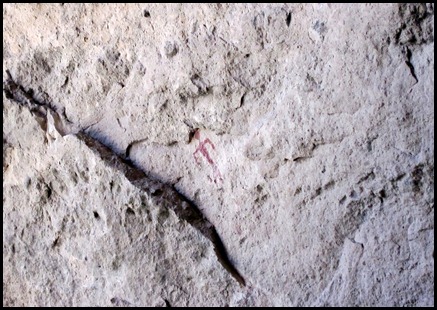 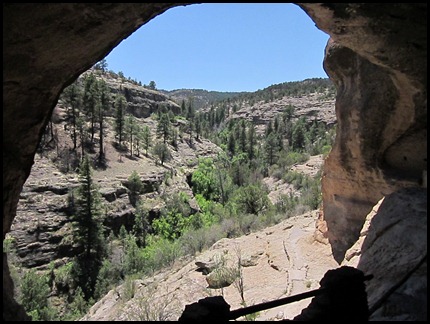 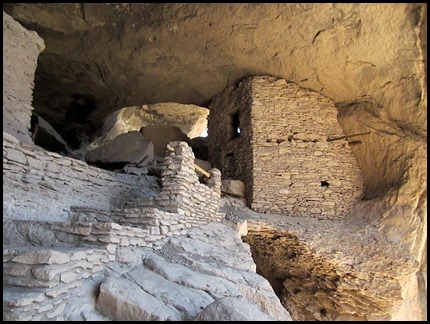 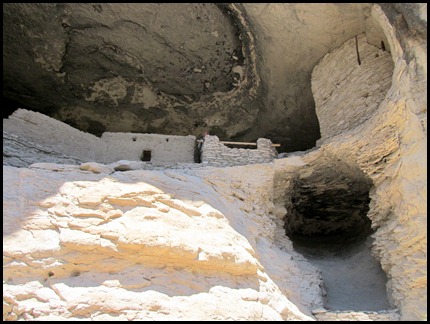 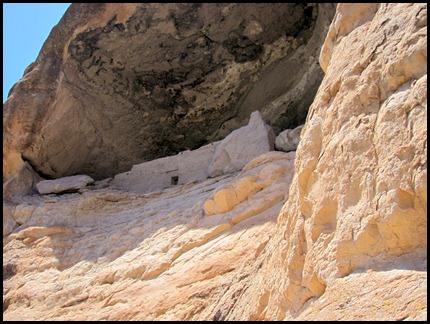 I was a little stressed about coming down this ladder on the way out, but managed to do it with a smile on my face. It was part of my therapy to overcome my fear of heights, and it seems to be working. Jim is confident that one day I will be able to get on the roof of the Lazy Daze. I’m just afraid I won’t get back down! 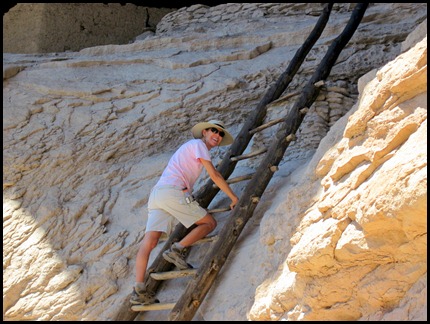 On our way back to Mesa Campground (22 miles from the Cliff Dwellings), we stopped at a nice little Forest Service campground at the trailhead for the Little Creek trail. Couldn’t really find the trail but took a short walk along the creek, which is a tributary of the Gila River. It was a pretty spot and there were some nice sites near the water. The sign said no trailers over 20’ but we could have easily gotten our rigs down there. 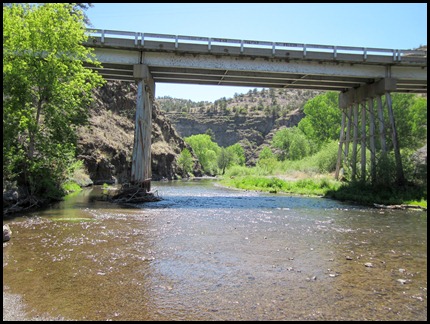 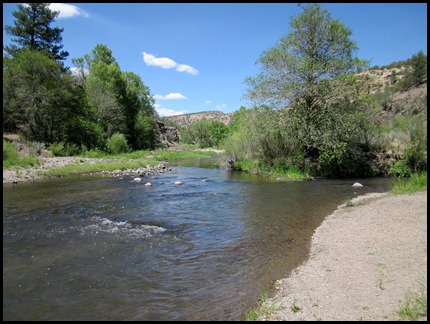 The Gila Cliff Dwellings are an out of the way destination, but well worth it to see, and the surrounding Gila National Forest is much more scenic than we expected. We’ve really enjoyed it here. Now we’re looking forward to visiting Mesa Verde in Colorado to compare.