After Alex and Ellen left, we finally made our way to the nearest pickleball courts, which are about 10 miles away. They have a very nice set-up at Manzano Mesa park, with 18 courts, each one with its own fence and bench. Outside of the courts is a big area of covered bleachers for viewing. As we walked in, the first person we saw was Dennis, one of our pickleball buddies from Jojoba Hills. He and his wife Debbie have a home in Albuquerque. We played a few games with him and another guy, then played a few more with some different people. We went back a few days later and found some other players who were similarly matched, so we had some good games. The Senior Olympics are here for two weeks so the courts are closed until later this week.


Our next guests were George and Tina (and doggie Jax) from Hemet, CA, who were on their way from Silver City, NM to Cortez, CO. They stayed at the KOA just off I-40 and on the day they arrived we stopped by to visit after a great lunch at El Patron with Dennis and Debbie, and Murray and Nancy, also from Jojoba Hills, who were in town for a few days.


While George and Tina were here it was the hottest it's been so far, so we took a drive about 50 miles north to check out the Jemez Springs area and go for a hike in the cool forest. We did a 4 mile out and back to McCauley Springs, a very pleasant trek through the woods, which would have been a bit nicer if the thunder and lightning hadn't been approaching. Jim ended up turning around as he didn't want a repeat of the hailstorm we endured in Santa Fe a few weeks ago, but the rest of us pressed on and only got a few drops of rain.


On the way we stopped to check out Soda Dam hot springs, right alongside the road.


The trail to McCauley Springs is about 5 miles north of the small town of Jemez Springs at the Battleship Rock Picnic Area.


We went on a Saturday so there were plenty of families and dogs in the springs and nobody seemed concerned about the thunder. There are several pools so the crowd was spread out, but we were not tempted. The water temperature is only around 89 degrees, so it's really a warm, not hot spring. 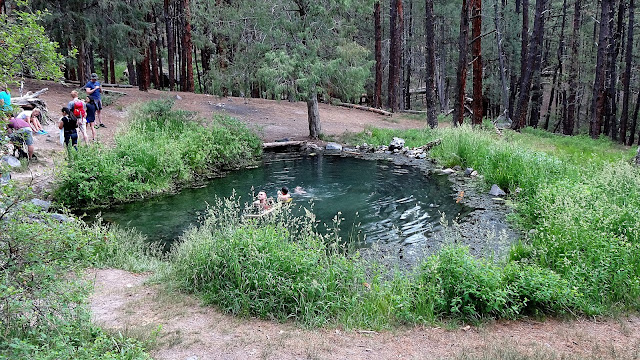 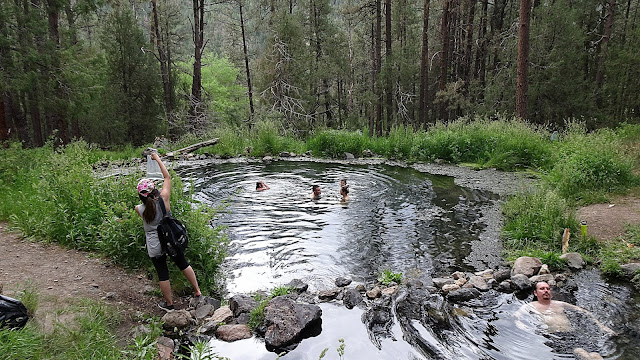 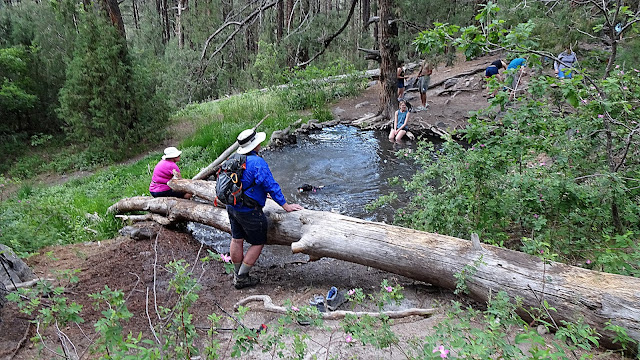 After the hike we stopped for lunch and a beer on the patio at Los Ojos Restaurant and Saloon, where we found a pretty good veggie burrito. It was a fun day and we enjoyed hanging out with George and Tina, and Jax who was very well behaved in the car and restaurant.


Except for a few days in the mid 90s, the weather in Albuquerque has been pretty nice and we've still been enjoying our morning neighborhood hikes and walks. The flowers are one benefit of spending summer in the high desert. 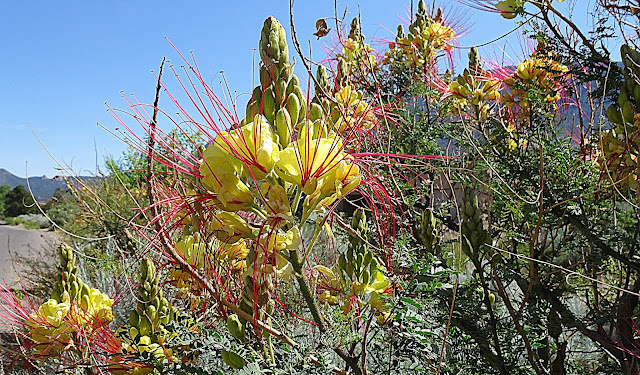 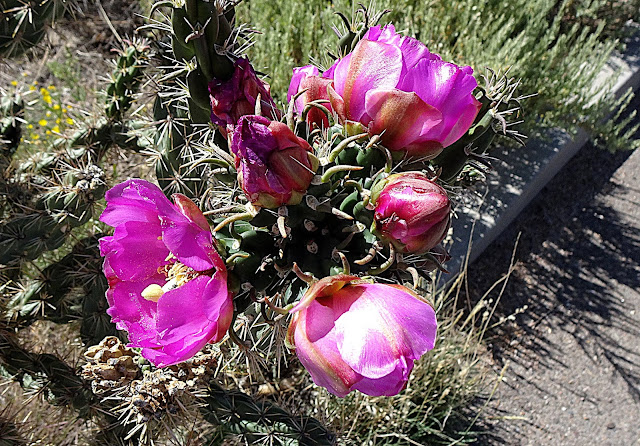 A cool front came through over the weekend so we took advantage of it and did a scenic 5 mile hike on a trail we hadn't been on, the Piedra Lisa trail just a few miles up the road. The first part of the trail looked down over this subdivision of large homes that are accessed from a private dirt road that continues on past the trailhead parking area. We could see plenty of solar panels on the houses and found out this is an off-grid neighborhood. 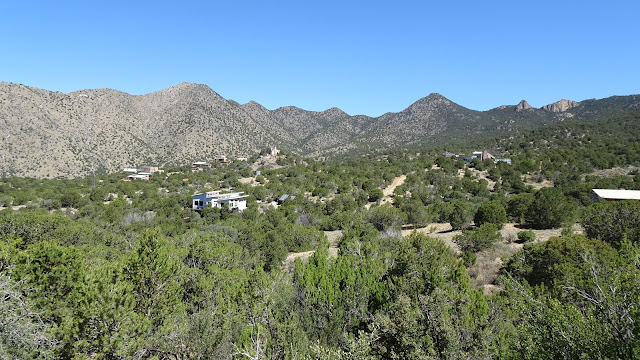 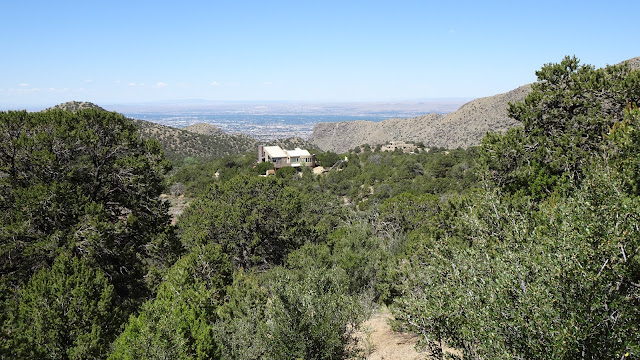 The trail climbed almost 1,200' up to 8,100' elevation. We could sure tell our bodies are not acclimated to hiking at higher elevations. 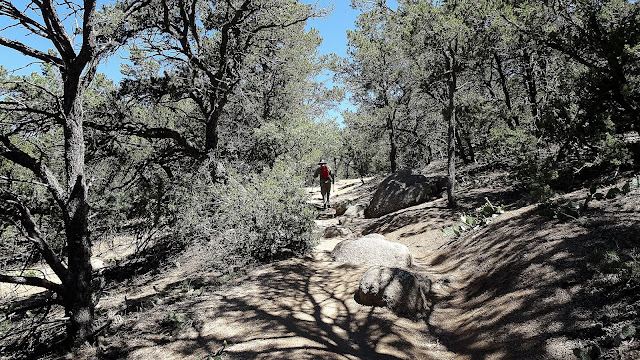 There were plenty of rocks and views to help us forget about the climb to get up there. 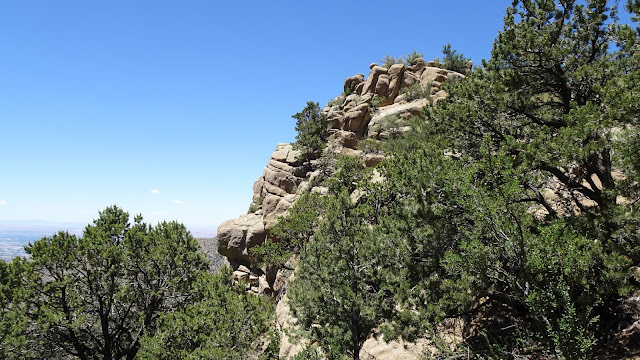 We spoke with some locals at the top who told us the mountains haven't been this green in years. 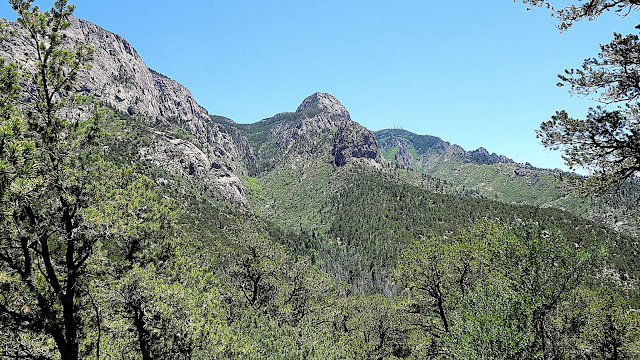 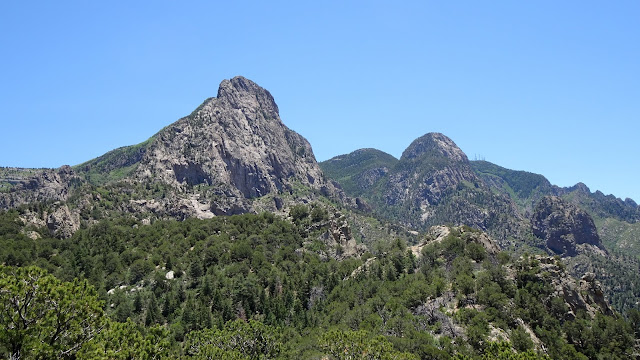 We had a couple days of smoke from the fire in Arizona's Tonto National Forest east of Phoenix but the wind shifted and it's cleared up quite a bit.

In other news, I think we've made a decision on a mattress and reclining loveseat. Our lease starts on July 1st, although we won't be in Fountain Hills until mid-August, but some of you may know that our friends Terry and LuAnn are already renting an apartment there and have graciously offered to accept deliveries for us so we will at least have a bed to sleep on and a place to sit when we get there. The rest can wait.

I'll leave you with this photo of handsome Luke on a bookcase in our bedroom. It's such fun having cats around the house again! 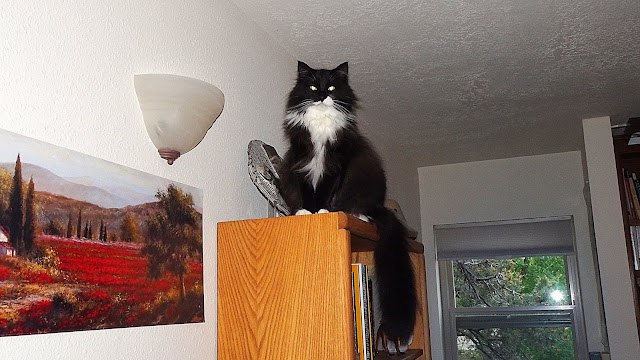 At Ease in Albuquerque

Hard to believe we are already a month into our three month house and catsitting job in Albuquerque. Things are going well and we feel very fortunate to be here. The cats are a joy to have around and the house is so much more comfortable than the Lazy Daze. We are not missing the RV life at all so far.

A couple weeks ago friends Alex and Ellen spent a week at a nearby Coronado Village RV park. They came over for dinner and walks around our neighborhood and I actually enjoyed cooking for them in our huge kitchen.

We took a nice bike ride along the Paseo del Bosque trail followed by lunch at Steel Bender Brewyard. Not only did they have a great seitan sandwich, there was also a very good live band playing that afternoon.


Another day we all took the train to Santa Fe, a bargain at $6 round trip for seniors.

The best part of our self-guided tour was the artwork. The capitol is home to a collection of art from over 600 New Mexican artists, as well as a changing exhibit. We were very impressed. 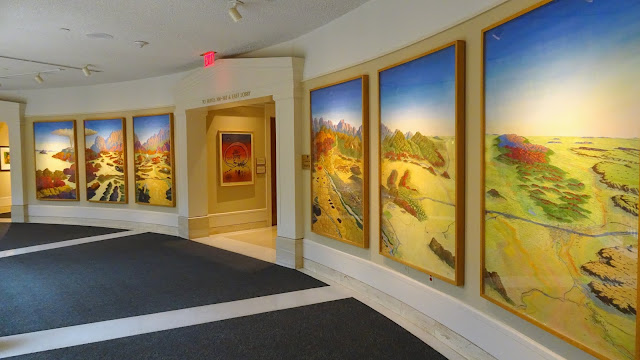 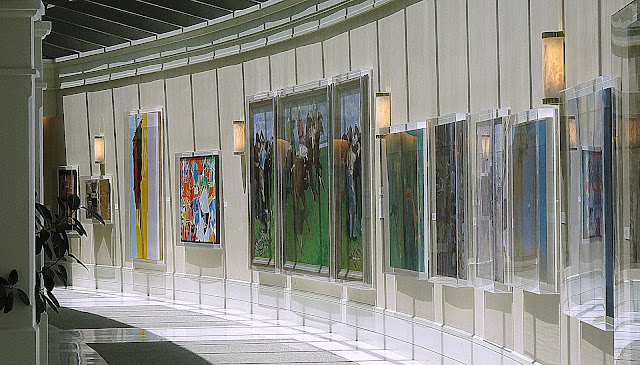 We all really liked this bison head.