A New Year but Nothing's Changed

I had good intentions to do one last 2020 post but somehow never got around to it. Our holidays were quiet and we are just happy to still be here in this tumultuous beginning to 2021.

I wanted to remember a few more hikes we've done since my last post so here goes. Alex and Ellen were out at McDowell during November and December, and although we are still social distancing, we visited them several times outside at their site, and one day met them and Terry for a hike at Adero Canyon.

There are numerous options at Adero and we have finally hiked all the trails there and have started repeating them. 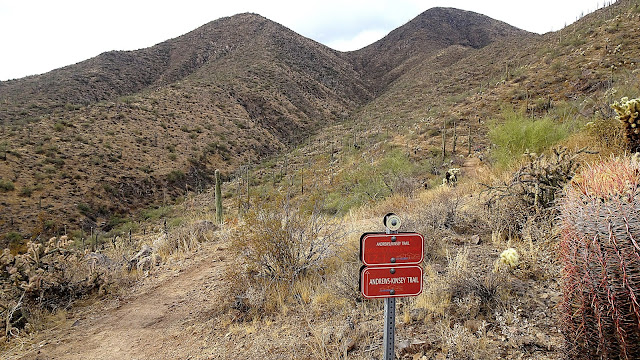 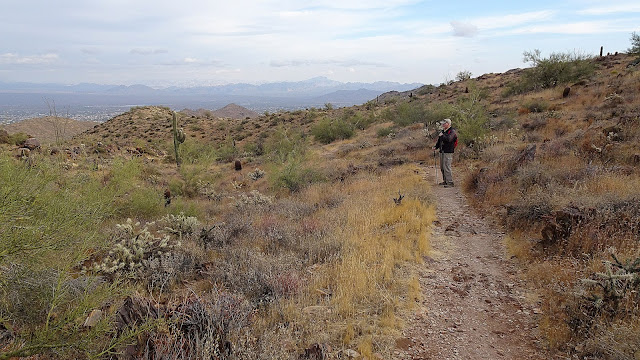 Mark has been camped down in the Superstition Mountains so a few weeks ago we made the 47 mile drive to visit our old Lazy Daze and take a hike with him. He was in a beautiful but not so level spot. 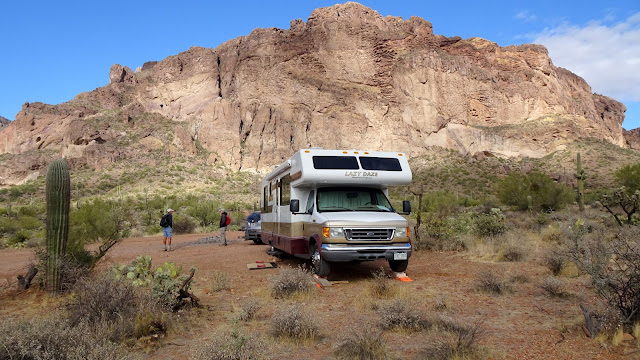 We jokingly gave him a hard time about his leveling job, while being impressed that he was able to get up on all the boards and blocks without someone spotting him. 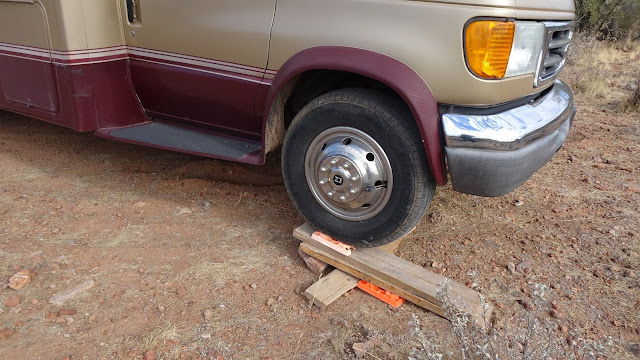 It was a gorgeous day along the Wind Cave trail. 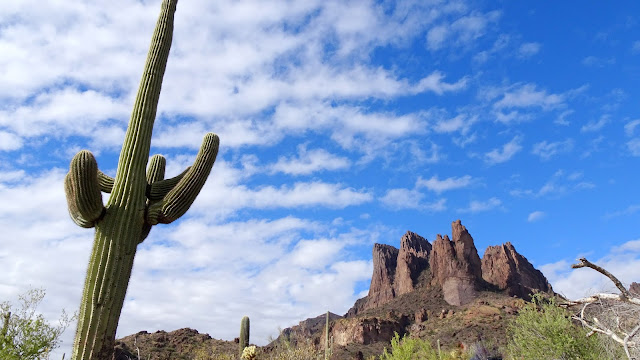 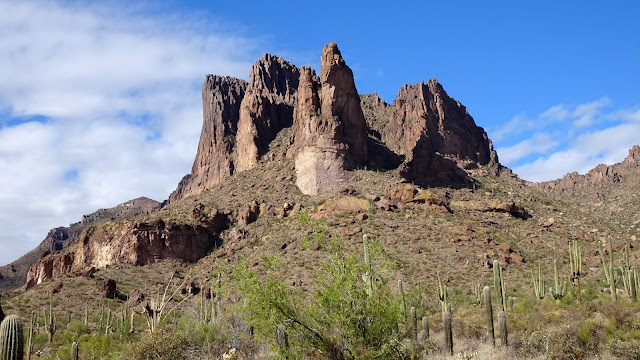 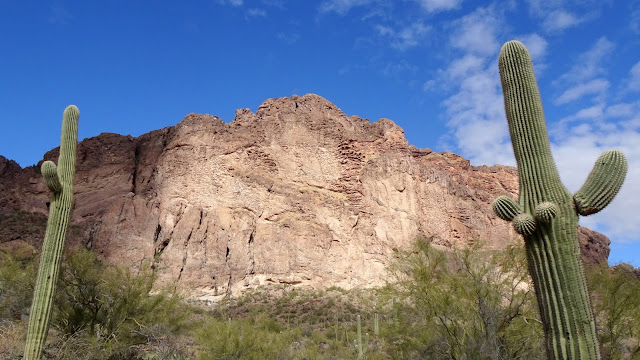 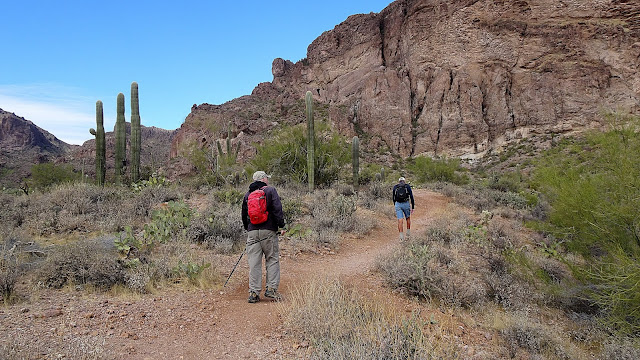 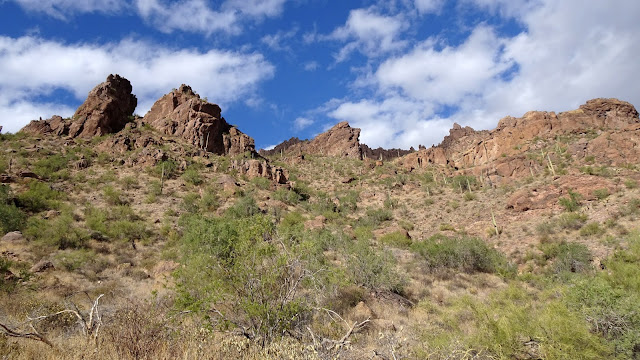 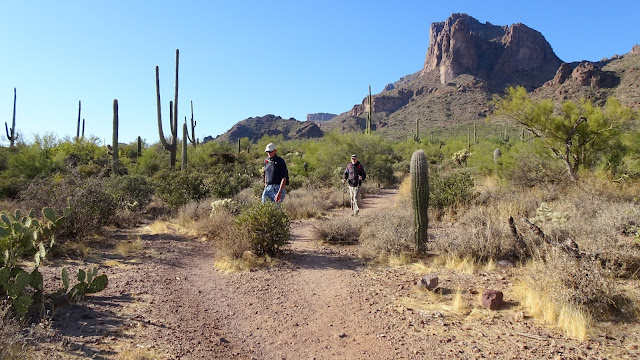 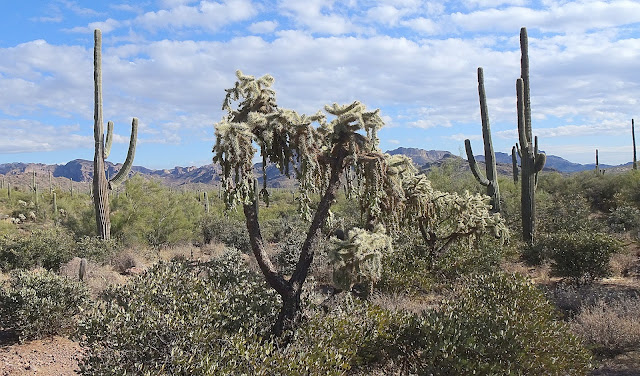 Last week we checked out the Tonto National Forest 10 miles north of Fountain Hills and found some horse trails along the Verde River. We had never been up there before and were surprised at how pretty it was. And we got to see two of the many wild horses that live along the Verde and Salt Rivers. 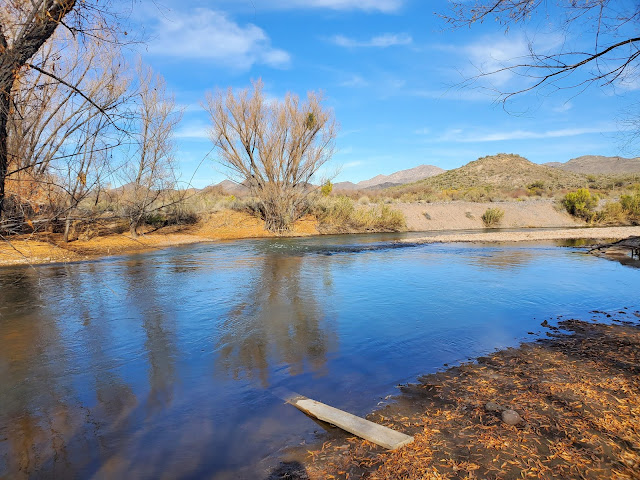 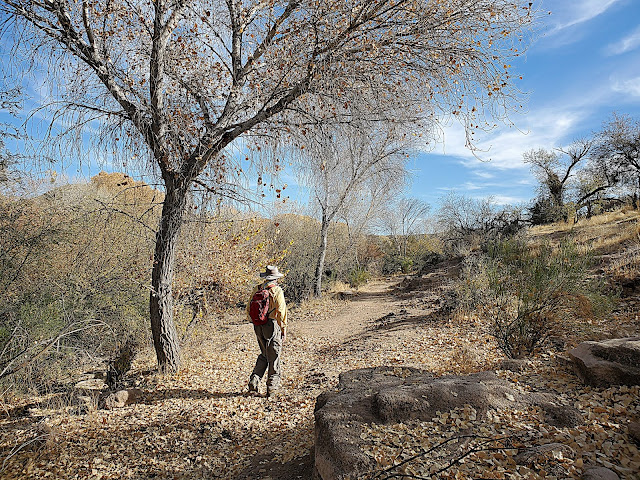 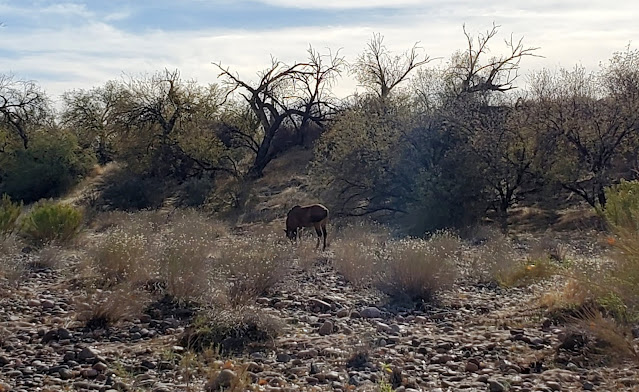 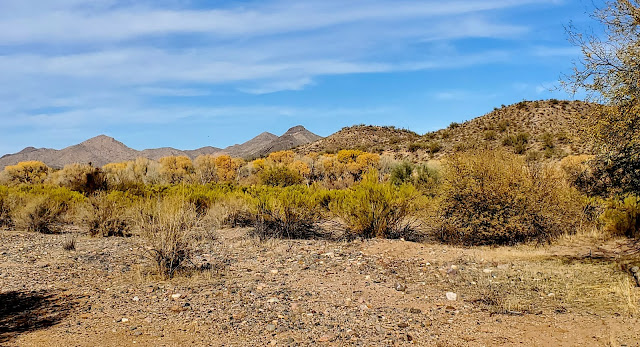 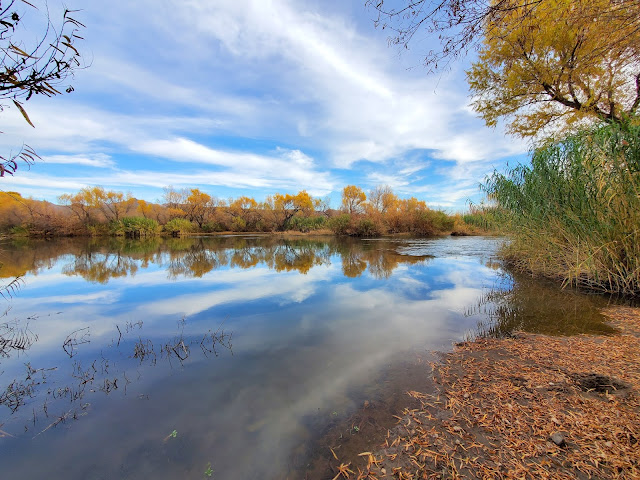 On Friday we made another trip to Gold Canyon and the Superstitions to hike with Mark again. Bobbie had joined him from Colorado a few days before, and Chris arrived a couple weeks ago. We managed a socially distanced hike on some bike trails off the main trails, since this is a popular area and we were trying to avoid the crowds. Luckily we only saw a couple of bikers out there. 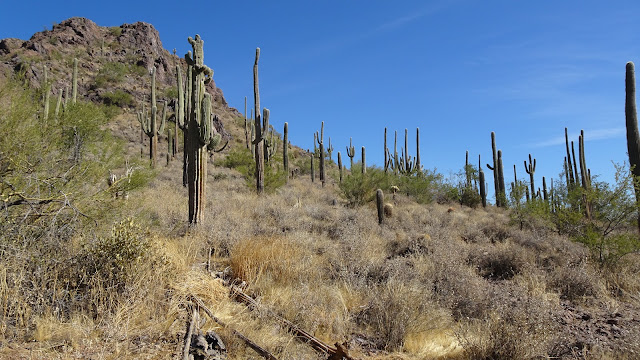 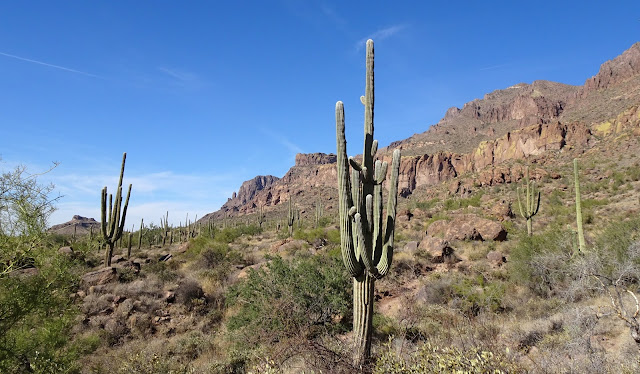 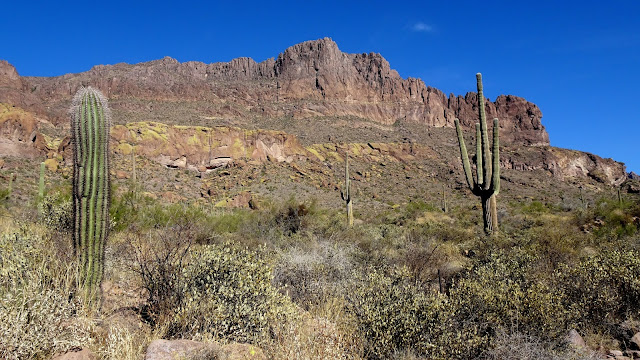 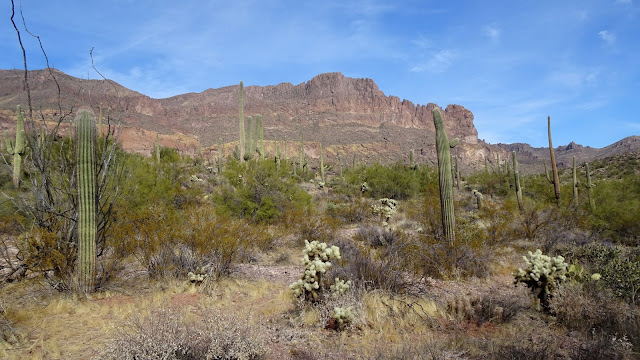 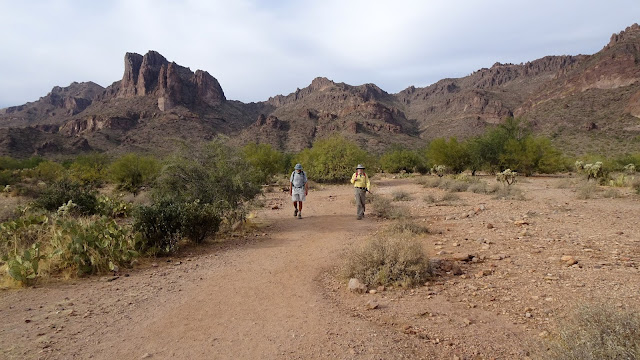 And a couple more photos I borrowed from Mark.

So other than hiking, fretting over the news, and trying not to catch COVID-19, we've been spending more time working online with Fearless Kitty intake team duties. We didn't realize what went on behind the scenes of a rescue organization until we got more involved. I really like it.
We are still getting our hands on cats at our Thursday afternoon caregiving shift. These three have all been adopted since I took their pictures before Christmas. 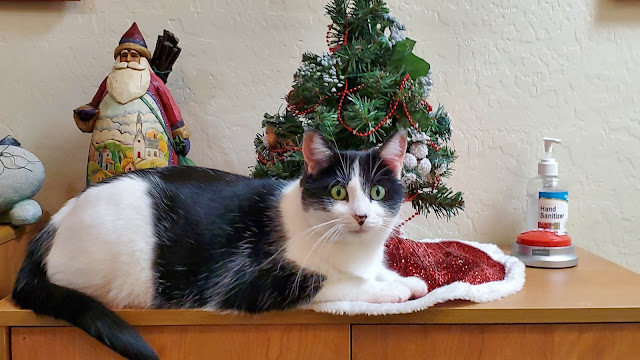 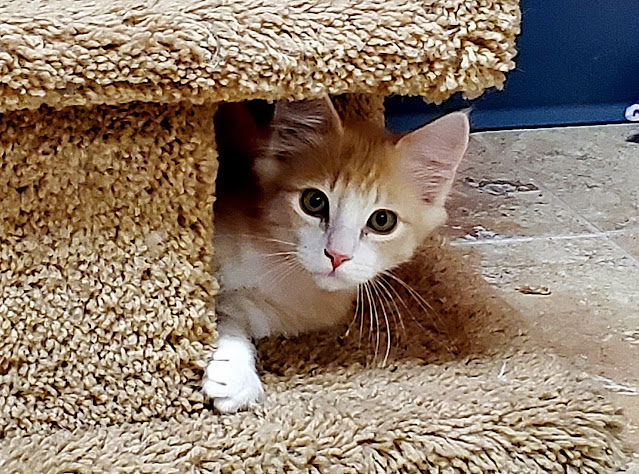 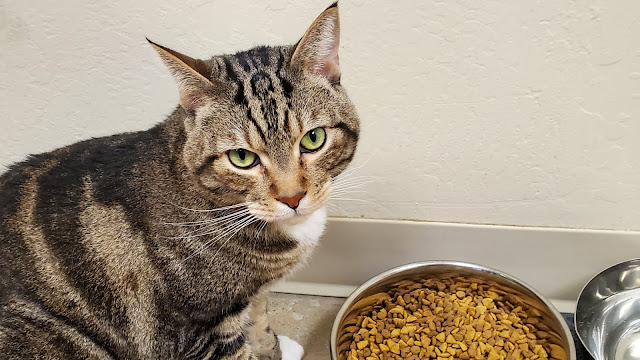 Addendum to this post: After I finished writing this I found out someone left two cats in the donation bin outside of Fearless Kitty Rescue, which of course is for food, litter, cat supplies, etc., not cats!! The carriers they were brought in were dumped next to a trash can down the street. Fortunately, a man walking his dog found them, as the volunteers only check the donation bin a couple times/day. It was a good thing the cats were microchipped as they turned out to be registered to another cat rescue in the Phoenix area. They were contacted and then called the people that adopted the cats from them, as they had adopted three, not just two. They were told to bring the other to Fearless Kitty this morning, which they did, and someone from the rescue came to pick up all three of them today. I am trying to reserve judgment since the cats are safe, but it's not easy.
And we're still patiently awaiting the vaccine but suspect it will be at least a couple more months. 2020 was a long year, and so far by the way 2021 is playing out it isn't looking much better. Only time will tell...
Posted by Jim and Gayle at 4:13 PM 18 comments: