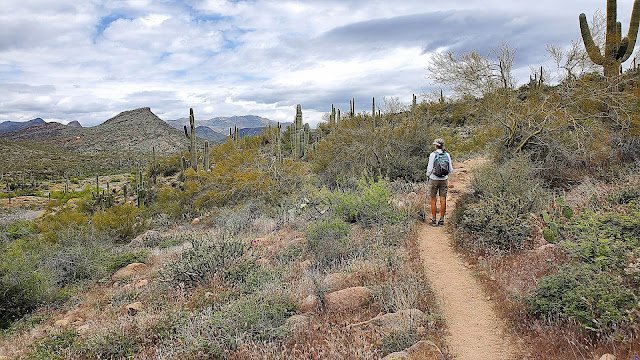 The other day we took a drive about 25 miles northeast of Fountain Hills to the Ballantine Trail in Tonto National Forest on the way to Payson, AZ. This is a trail we had not been on before but had heard good things about, and since we were needing a diversion from the news and some new scenery, we also hoped that being farther away from Fountain Hills and Scottsdale there would not be many people on the trail.

There is a 3 mile loop that the Ballantine trail continues off of, and we decided to take it counterclockwise as there was a young couple who were heading off that way and we knew we would not be hiking as fast. A few other people came by us going the other direction in the first mile, but for the rest of the hike we were alone. It is a beautiful trail, especially with the desert being so colorful this spring. 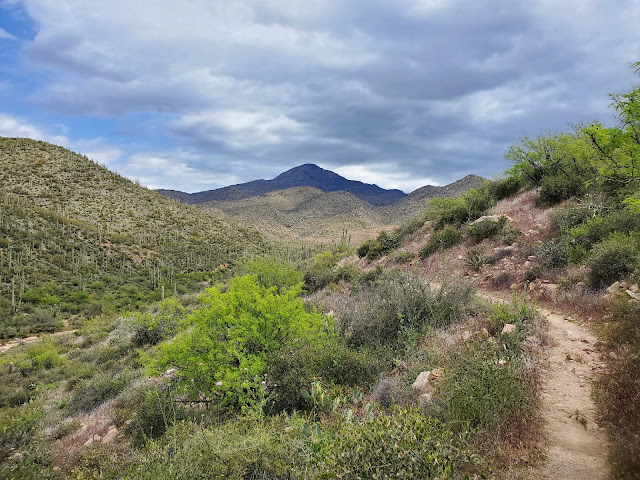 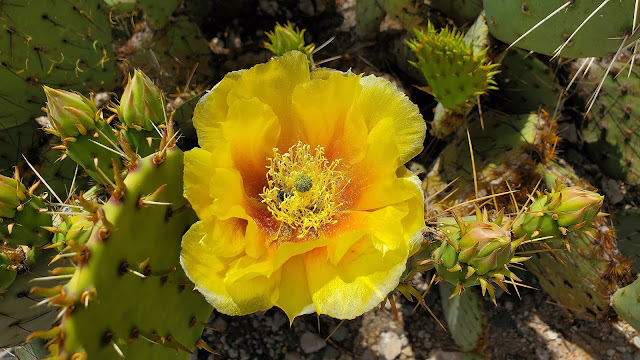 We were amazed by the number of saguaros. 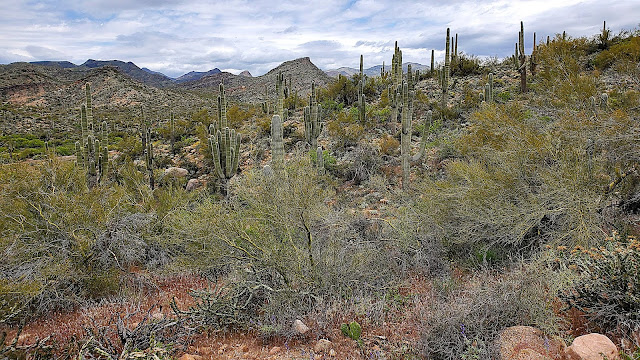 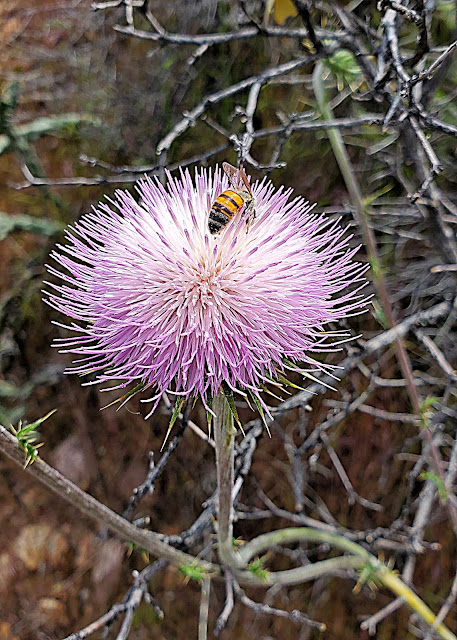 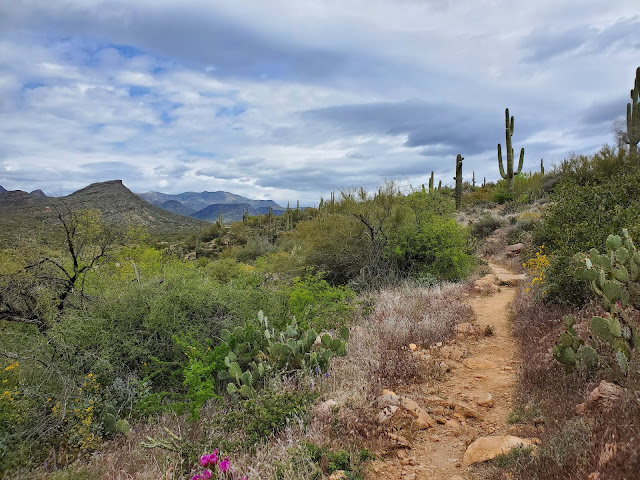 The Pine Creek loop has a view of Pine Creek, which surprisingly had quite a bit of water flowing. 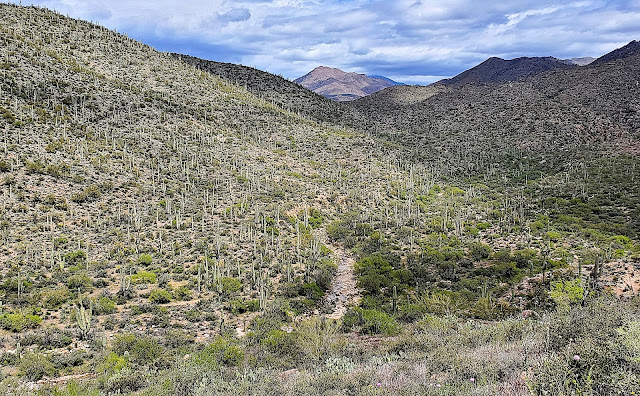 We continued on the Ballantine trail for about a half mile. It was steep and rocky but very scenic. 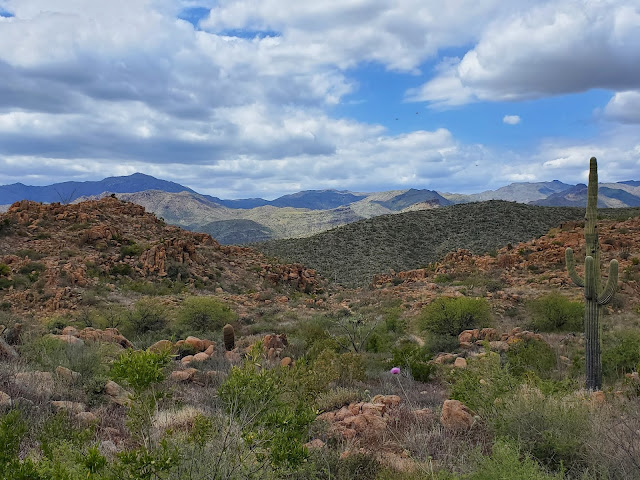 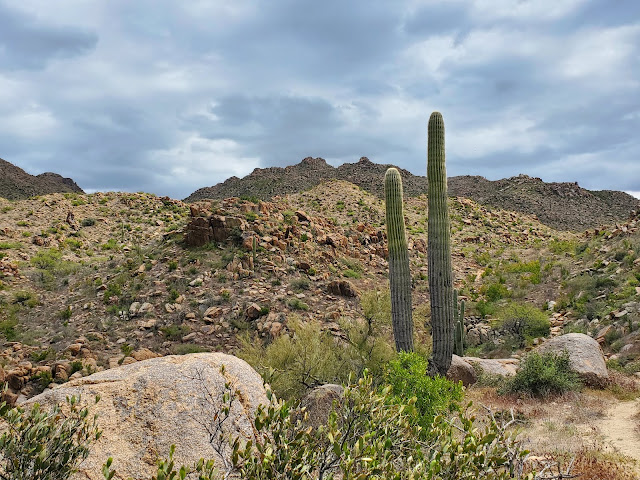 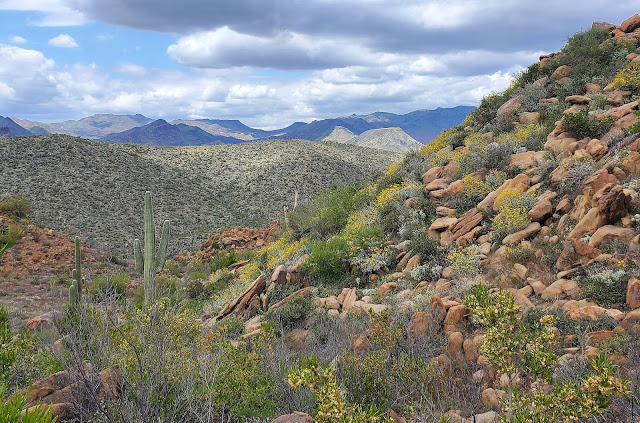 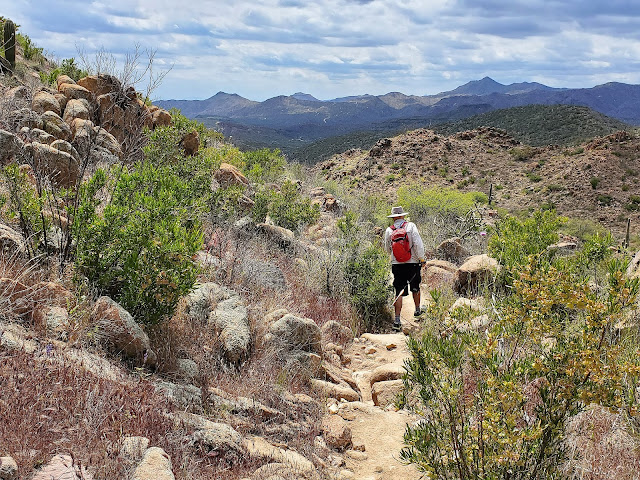 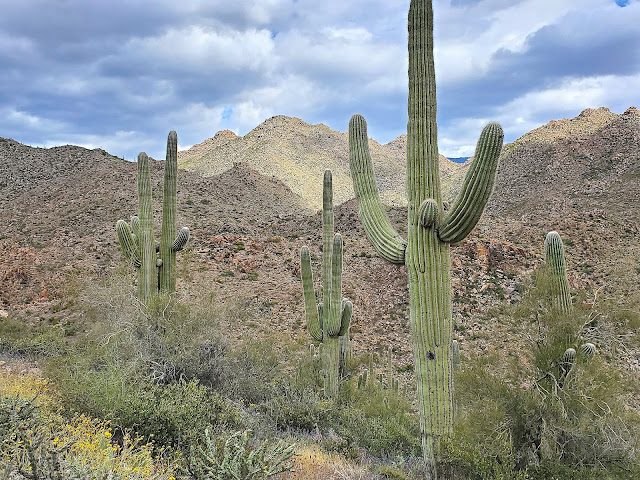 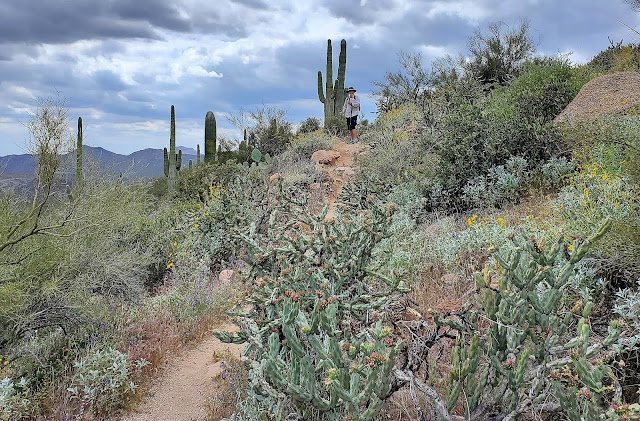 It was a great hike until near the end when Jim did a little slip and fall, putting his hand down on cactus. Days later he still has some pieces in his palm.

Last week the director of Fearless Kitty called to ask if I would be up for some painting of cat rooms while many of them are empty of cats. I jumped at the chance for something to do and told her I was sure LuAnn would be interested in joining me. So we spent three afternoons painting and doing a few other little projects after the staff went home, keeping our social distance, of course. It felt good to do something "normal", although seeing most of the rooms without cats in them seems strange. We have a couple other rooms to paint next week after some of the remaining cats get moved around. We're hoping she finds more for us to do after that.

And finally, a few photos from our Fountain Hills walks. 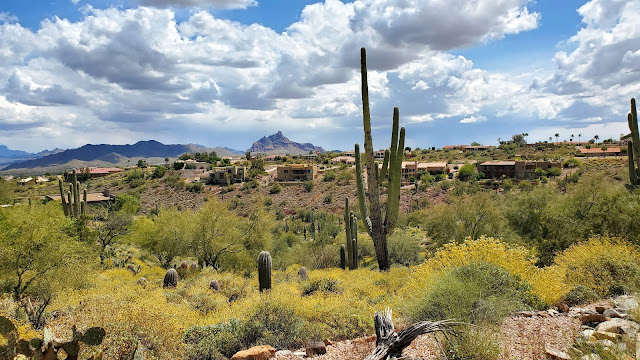 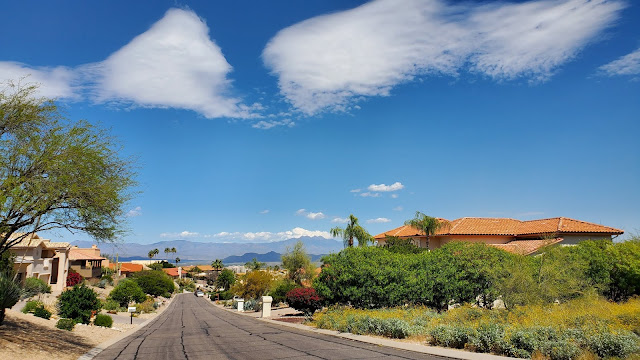 Stay healthy out there everyone!

Update From the New World 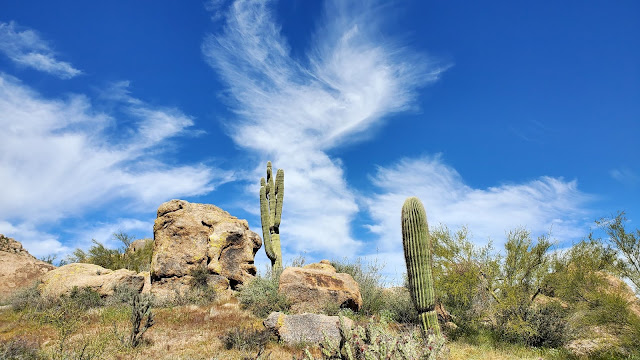 Yes, it's been a while, but I wanted to write a post with some pretty photos so I would remember something good about this crazy time in our world. We are doing fine so far, isolating ourselves as best we can, while still walking or hiking every day to take advantage of the good endorphins and lovely weather before the heat returns. We miss going to the gym and aren't doing such a great job of working out in the apartment without weights, but we're trying. 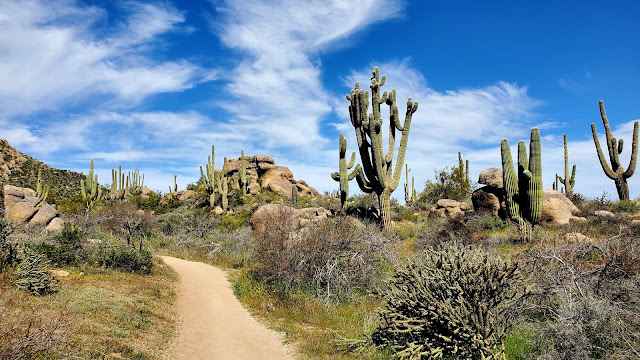 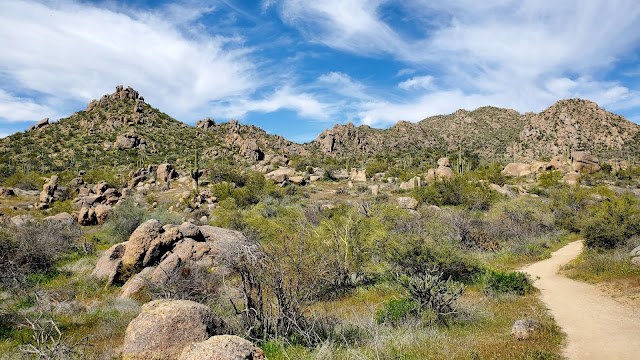 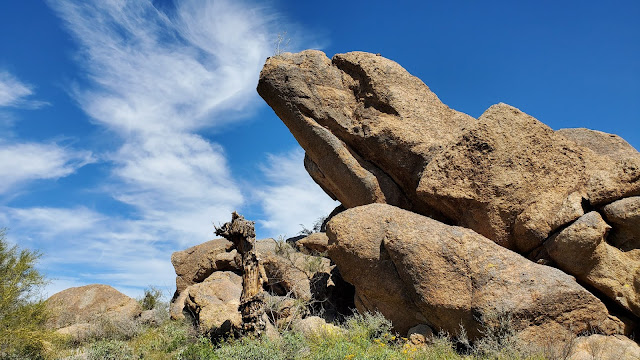 We've lost track of time, but somewhere over the past month our Iowa friends Chuck and Carla were camping at Roosevelt Lake, about 80 miles from here, so we took a drive to visit them and check it out. Somehow we never made it there in our travels, but it's a beautiful area with numerous campgrounds, trails and of course the lake. 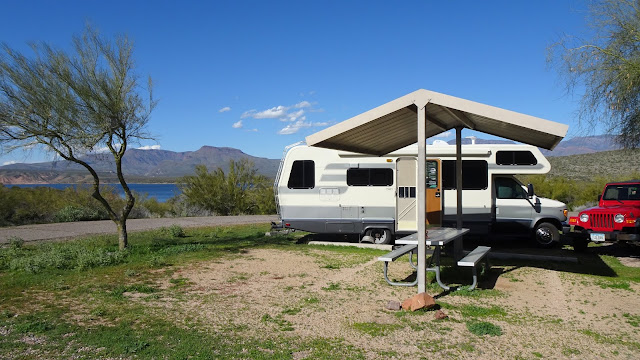 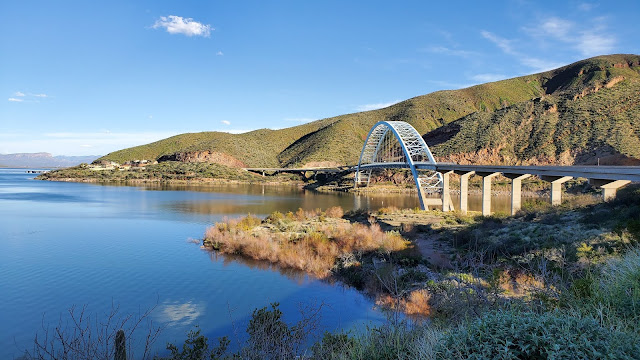 Our San Francisco friends David and Mary were staying out at McDowell Mountain Park a couple weeks ago and we had a nice social distance visit with them, too.

Just before that, Mark and Bobbie stopped for a couple days on their way to Moab. We took them on a walk around Fountain Hills before they decided to move on due to rain and the coronavirus. I borrowed this photo from Mark.

Here are some photos from hikes at McDowell Mountain. We both got new phones a couple months ago (refurbished Samsung Galaxy S10e) and almost never carry our cameras anymore. They take much better photos than our old phones and about as good as our cameras.

There aren't many poppies this year but brittlebush is in bloom everywhere, as are many other colorful flowers. 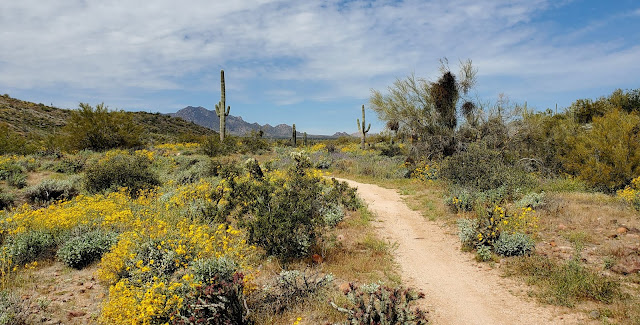 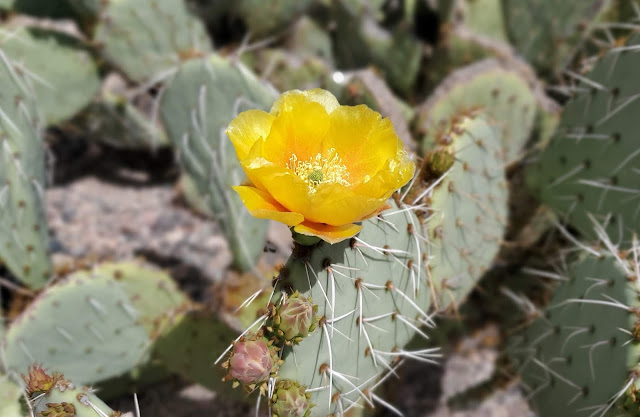 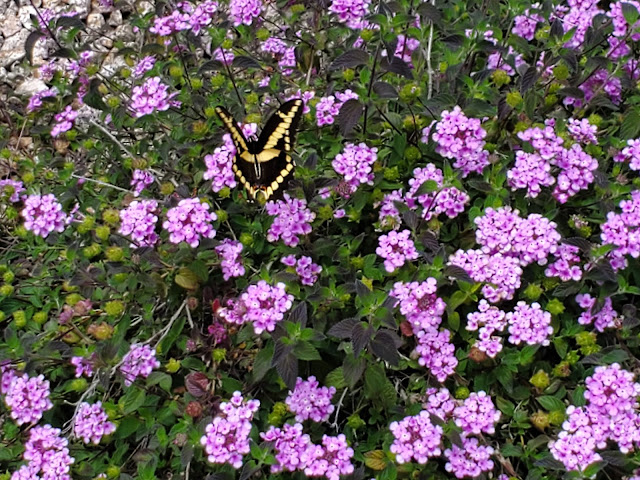 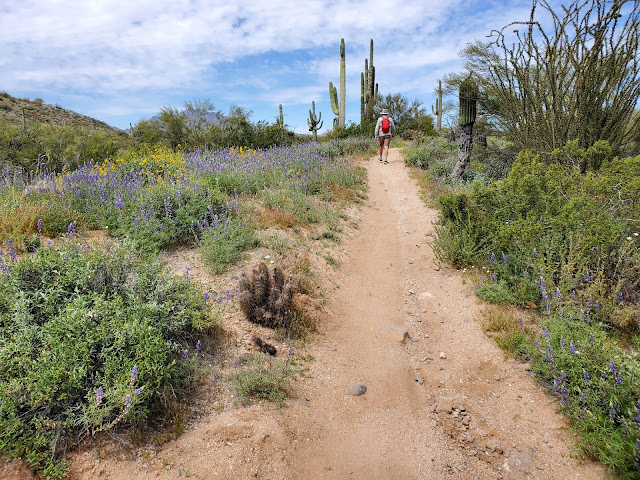 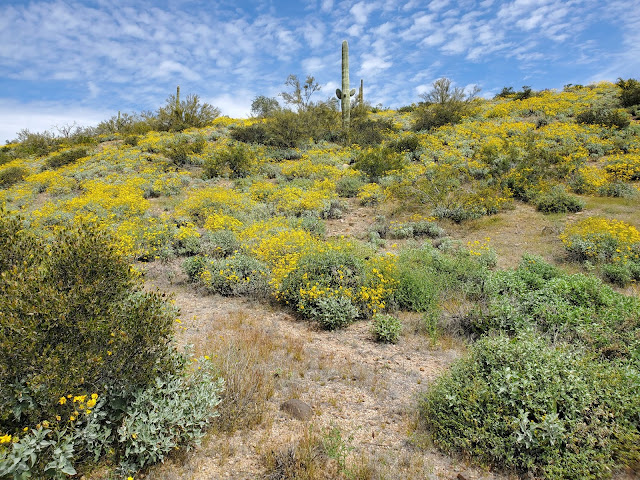 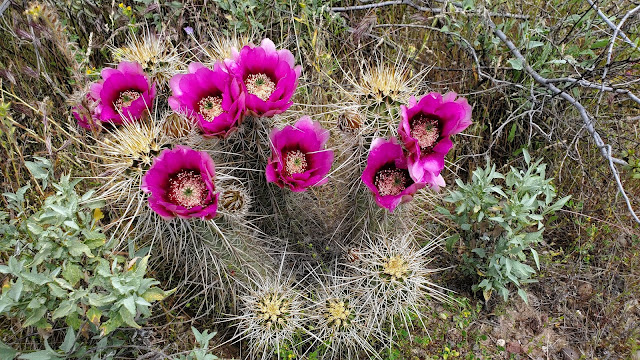 We had a house/catsit lined up in Sedona a couple weeks ago but the virus put a stop to that. At this point we are making no plans since everything is so up in the air. I told Jim the other day that the hardest part of all this, besides trying to buy toilet paper, is the lack of anything to look forward to. It is a strange feeling to have nothing on our calendar other than a grocery pickup, so I am trying to live in the moment and appreciate the fact that we are healthy and living in a very nice community. We feel like we hung up our RV keys at the perfect time. Still, watching the news makes for some sleepless nights.

Haven't seen any rattlesnakes on the trails yet, but I nearly stepped right in front of this healthy guy on the sidewalk the other day while walking around town. 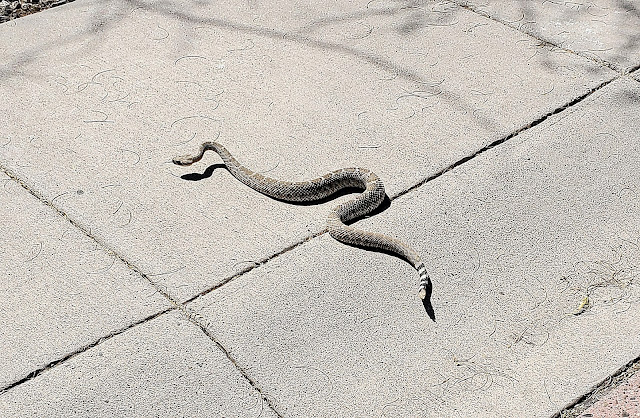 I am really missing my time at Fearless Kitty Rescue, but in anticipation of having to close the doors, they managed to get most of the cats and kittens adopted or put into foster homes over the past few weeks. Here are some of our buddies. Only Maverick, in the last photo, is still in the building along with his roommate Harpurr. For some reason they have yet to find homes, but the director has moved her desk into their room and is giving them plenty of attention.


I hope those of you reading this are staying in and staying healthy. I'm afraid it's going to be a long year...