All is well with us but we've been suffering from cabin fever and decided to take a little trip to somewhere cooler, Covid be damned. How foolish of us to think that there would be plenty of Airbnb type places to choose from in Flagstaff for a week or two during a pandemic when the governor is telling everyone to stay home. Our first try at booking a nice looking condo there resulted in an email the following day that those dates were not available because they had not updated their calendar. Not a good way to do business.

So it was back to square one, and by that time everything else was booked. Our next choice was Show Low in the White Mountains at 6,300', not quite as high but definitely cooler than Fountain Hills has been. We found a cabin in Bison Ridge a few miles outside of town that had a 7 night opening so we jumped on it.


This is the charred desert along Highway 87 between Fountain Hills and Payson, the result of the Bush Fire back in June that burned over 193,000 acres of the Tonto National Forest up towards the Four Peaks. It was caused by a vehicle that caught fire and pulled off the side of the road. 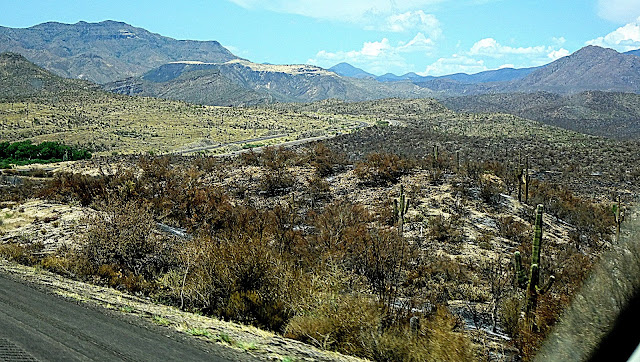 We got off to a bad start when arriving at the cabin as we discovered that the previous renter failed to leave a key in the lockbox. Fortunately, the owner called us back quickly and got the cleaning people to bring us a spare. I wasn't convinced they did an "enhanced cleaning" like the ad stated, but after doing our own disinfecting we felt okay about staying there.


It was a pleasant week of hiking in the forest and taking drives to check out the area. Many of the houses, cabins, park models and RV parks are summer homes or rentals for residents of the greater Phoenix area, since it's just a 2-3 hour drive and 20-30 degrees cooler.

It was a great location as there were trails from the subdivision that led to Los Caballos trail, part of the White Mountain Trail System, which we did a couple times in different directions.

The only trail that was really busy was the Mogollon Rim trail, since part of it is paved, it's only a mile long, relatively flat, and is just east of town off the main highway. After dodging people who seemed to have no concept of social distancing, we drove down the road to check out the Country Club trail, near the Pinetop Country Club. The parking lot was full of cars so we continued on and found a forest road to walk on, which was actually an old rail bed from logging days, that intersected an unnamed trail where we saw no one else. 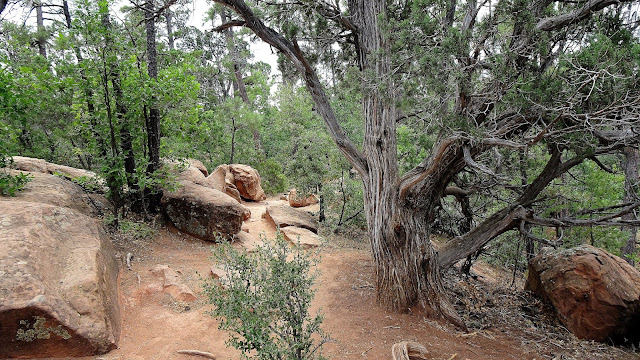 Our next hike was on the Buena Vista trail, a 10 mile loop just south of Show Low. It was too warm to do that long of a hike, so we turned around after 3 miles. There was a dried up pond and a pretty meadow near the start, then we climbed to some over-the trees views. 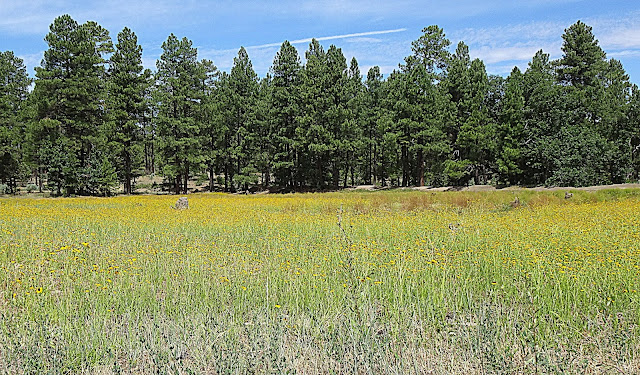 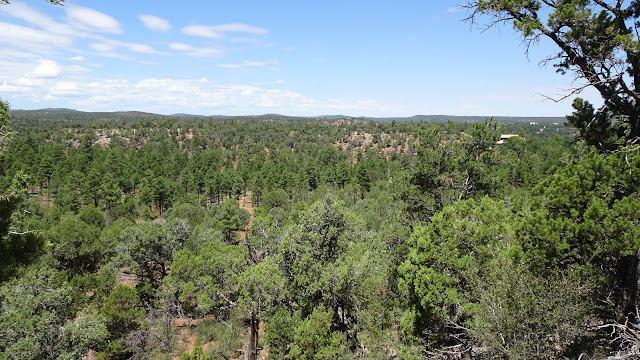 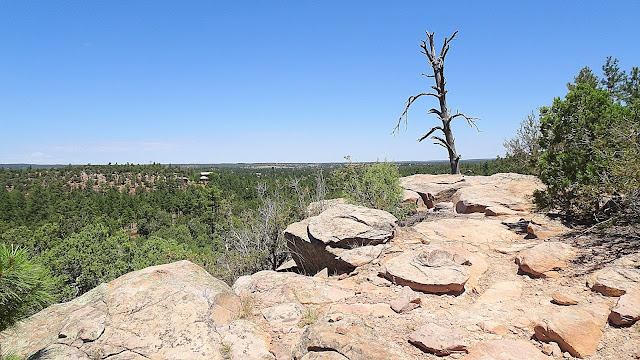 Coming back we saw several horseback riders who asked us if the wild horses were near the pond. We said we had not seen them, and didn't even know there were wild horses in the area. This time as we neared the meadow we saw them hanging out under the shade of some trees. 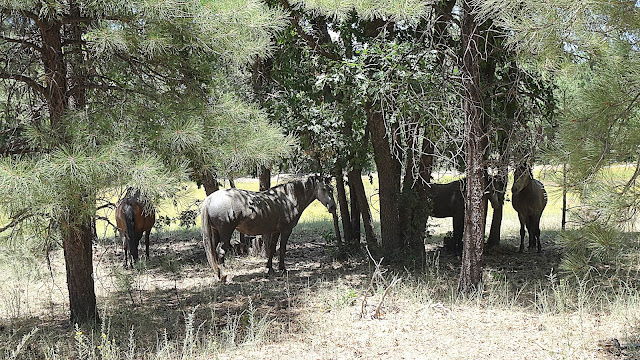 On the warmest day the temperature in Show Low was getting up to 90, so we drove about 50 miles east to the West Baldy trail. It's 8 miles to the top of 10,900' Mt. Baldy, starting at 9,200', certainly not a  day hike for us, so we made it 2.5 miles until the dark clouds started coming together overhead and turned around. We got lucky as it started raining just a short distance from the car. It was a beautiful trail that follows the West Fork of the Little Colorado River. We felt like we were back in Colorado. 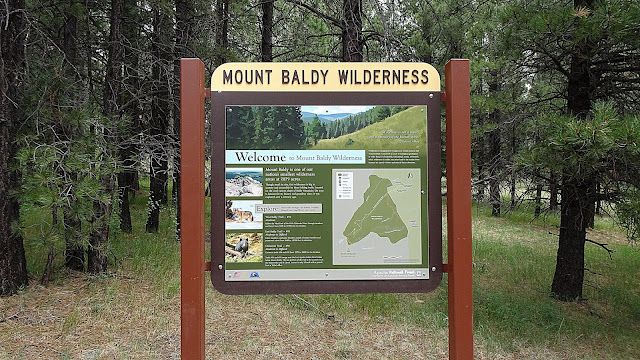 The forest is much more diverse at this elevation. 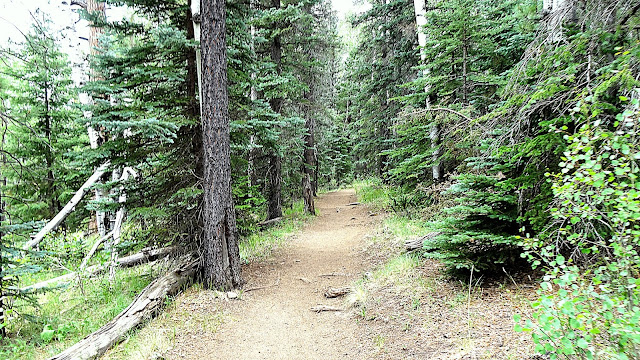 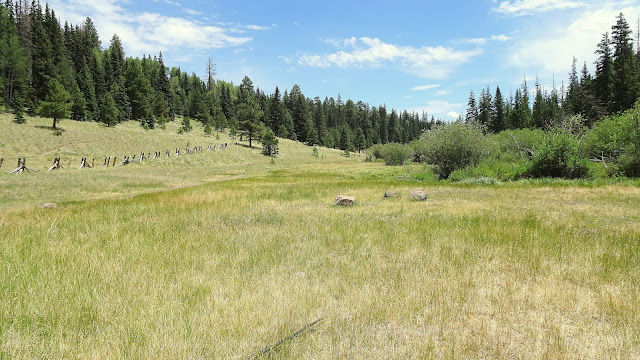 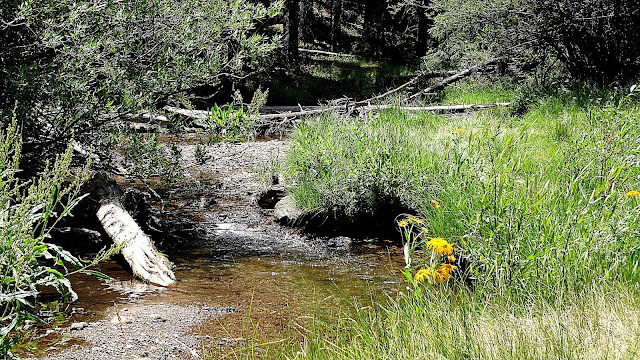 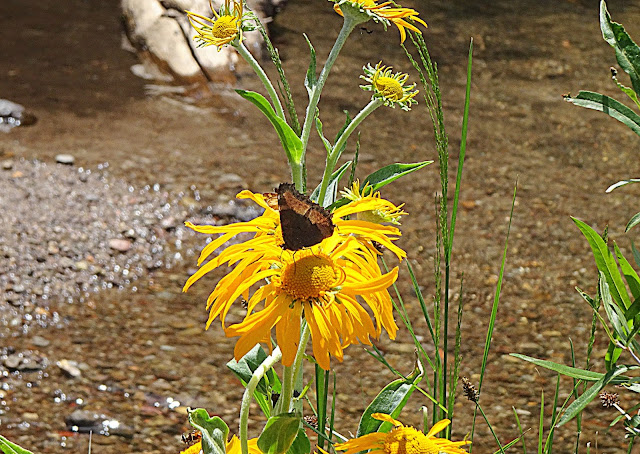 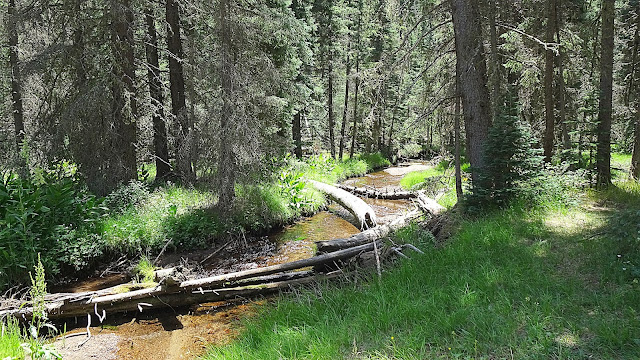 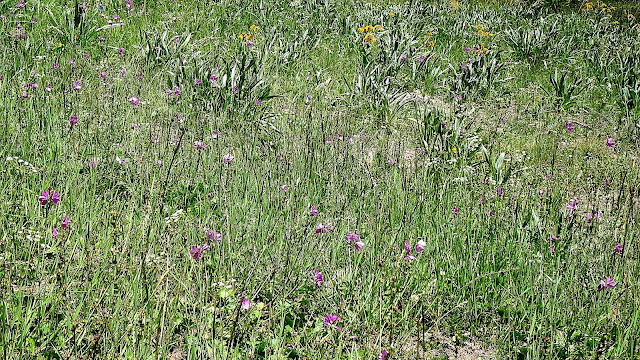 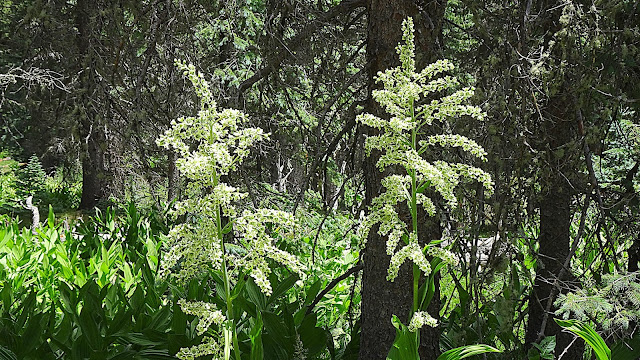 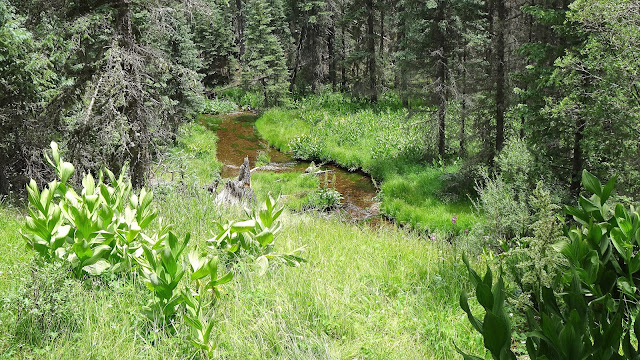 This little guy was following a man on a horse with another donkey and a dog. He was too far behind to get them all in the photo. 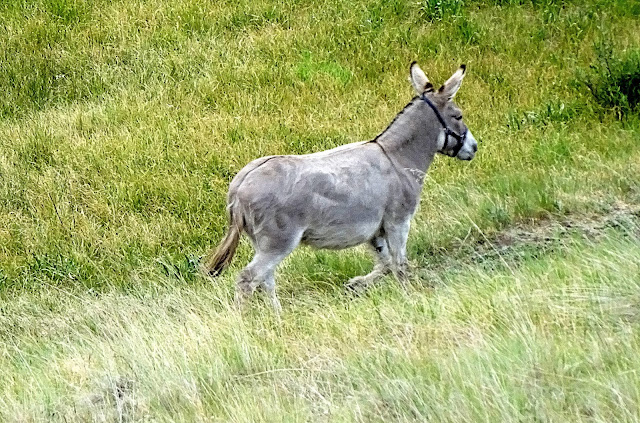 Our last hike was on the Panorama trail near Lakeside. Being a 9 mile loop we just did an out and back again since thunderstorms were in the forecast and the sky was getting dark. 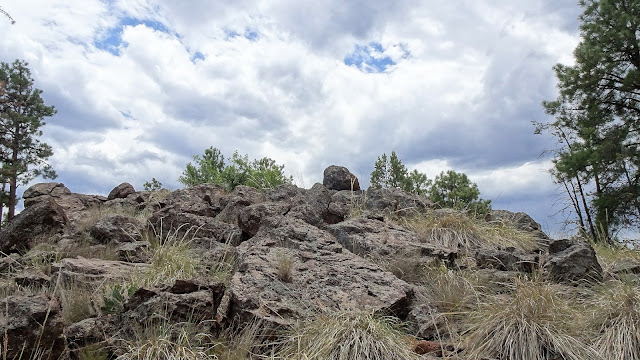 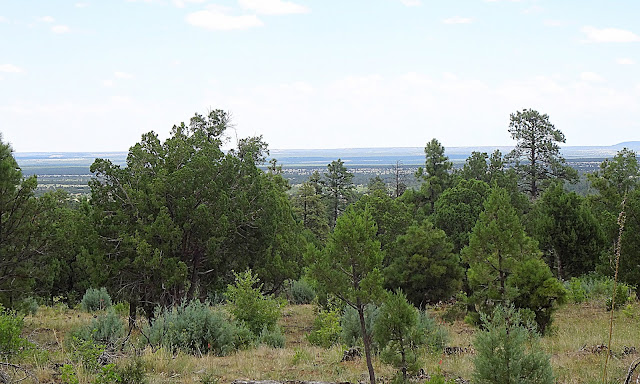 Wildlife sightings along the trail. 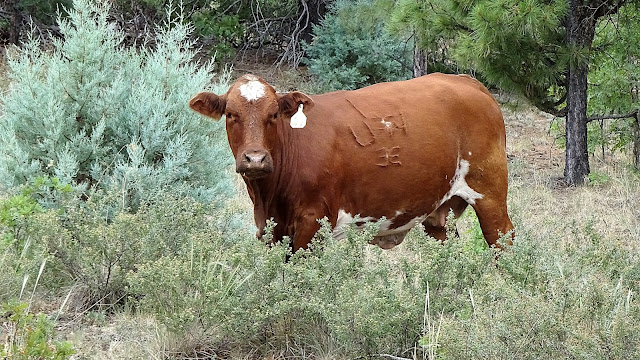 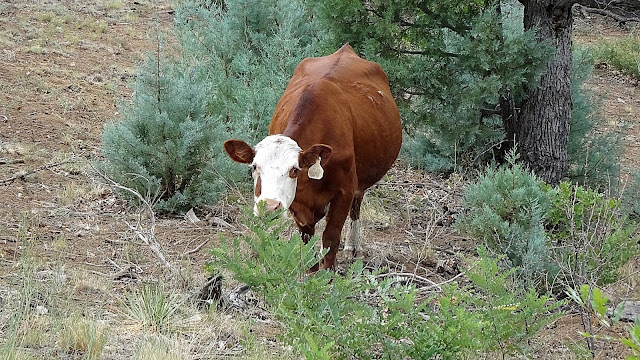 It was a nice getaway and it rained several afternoons, something we haven't seen in Fountain Hills since April. The weather people keep threatening monsoon is going to begin here soon but so far the storms are just skirting around the Phoenix area, other than a couple of light showers.

On the way home, we stopped and had lunch in the car along the Mogollon Rim, a few miles down the road from one of our favorite dispersed camping spots. Hard to believe we were there in 2013 as it seems like it was just a short time ago. 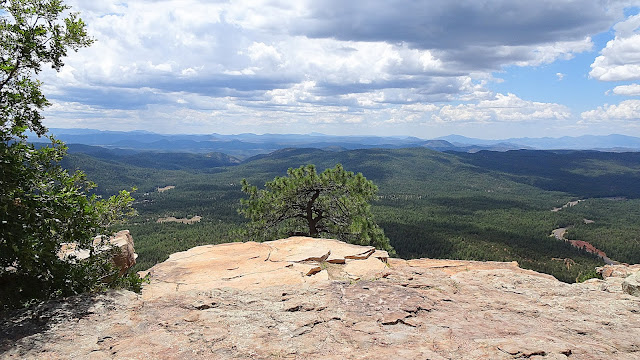 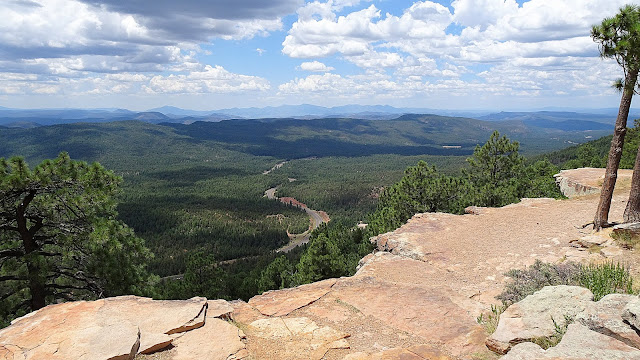 We ended up signing a lease for another year at the apartment. Although there are a few issues, we just couldn't find anything better and it's a nice place to live. We've started going back to Fearless Kitty doing one caregiver shift a week as they have been getting more cats and kittens even though it's still not open to the public. Adoptions are happening by appointment only and are up considerably from last year. Who wouldn't want to cuddle with a cute cat or kitten while they are staying at home more? 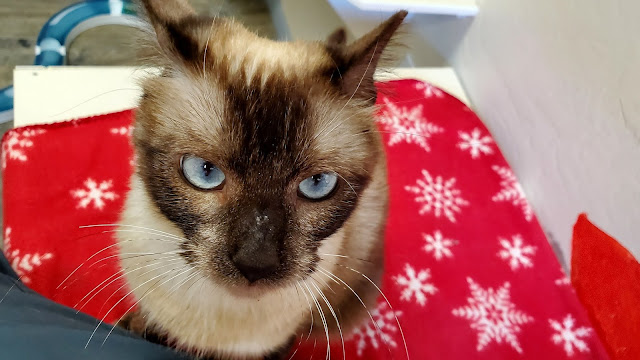 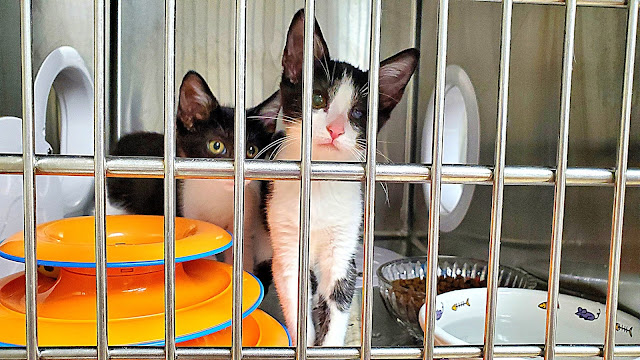 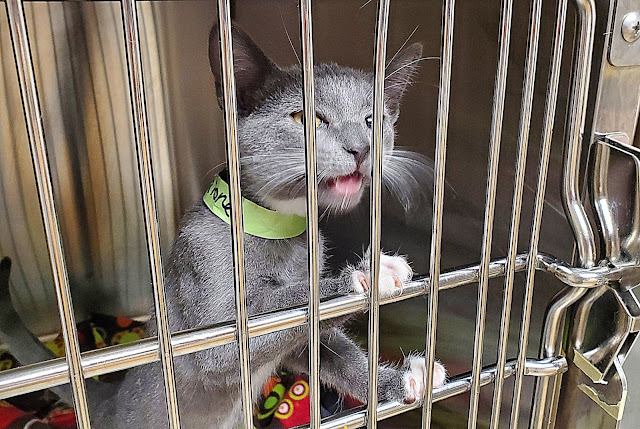 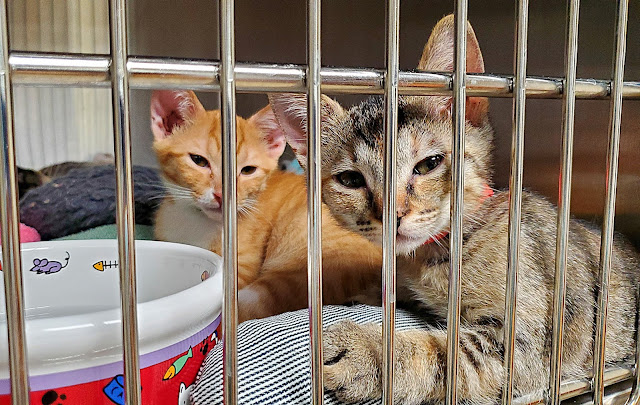 And the good news is all of the above have been adopted!