Hard to believe we’ve been here at McDowell Mountain for 2 weeks already. Last Sunday we moved to our original reservation site, probably one of the best in the campground. No close neighbors, a huge palo verde tree that shades the picnic table, and beautiful desert and mountain views. 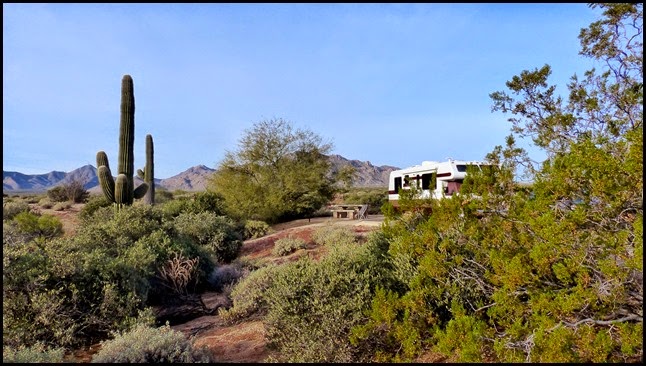 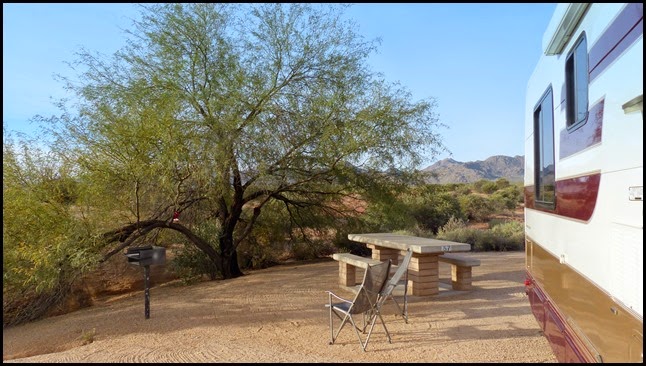 With several cloudy days in a row, the sunrises have been outstanding. 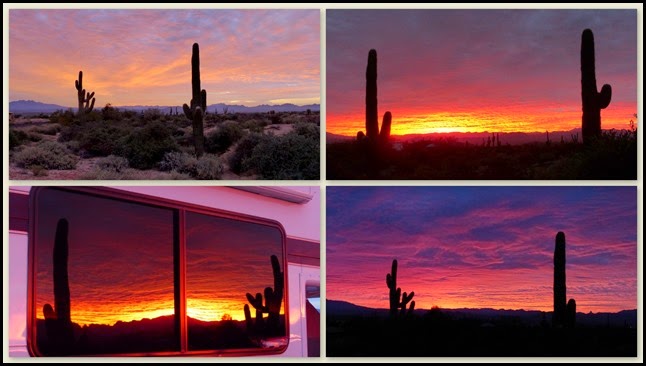 There was a hummingbird in the tree when we were setting up, so I made some nectar and put up the feeders. Within an hour they were using them. Of course they aren’t the only ones looking for a drink, so I set a bowl of water on the grill for the others. 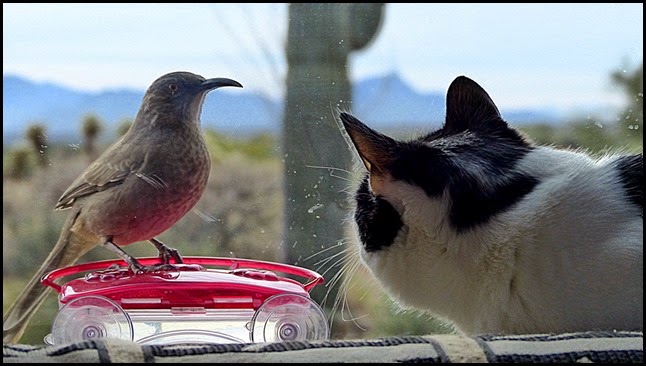 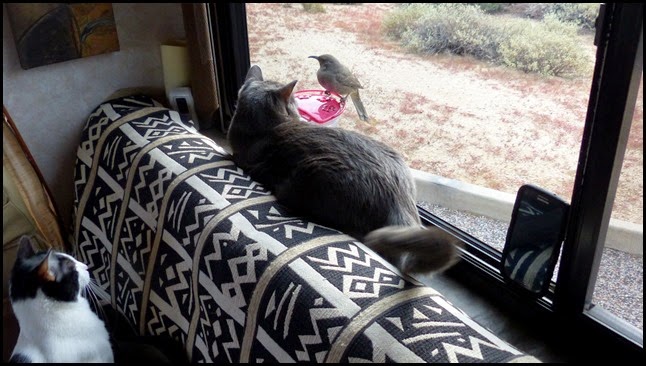 I’ve been biking almost every day, and Jim is still walking 3-5 miles and feeling great.

We spotted this lone ocotillo bloom, quite a contrast to the desert browns and greens. 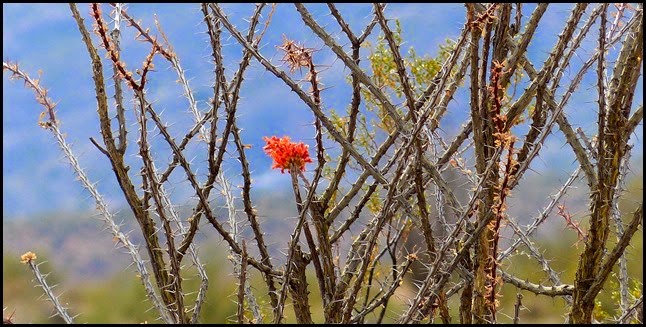 One day we had to pick up mail at the post office so we combined it with a walk around Fountain Hills. This upscale planned community just a few miles from McDowell Mt. Park was developed by Robert McCullough, the man who brought the London Bridge to Lake Havasu. He obviously had too much money on his hands. The lake in the center of town is composed of 100,623,600 gallons of "chemically treated, recycled wastewater”. No swimming allowed. 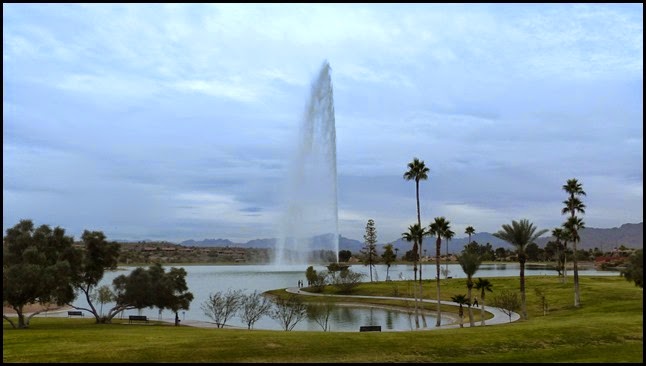 There is a one mile paved path around the lake, and some cute sculptures. 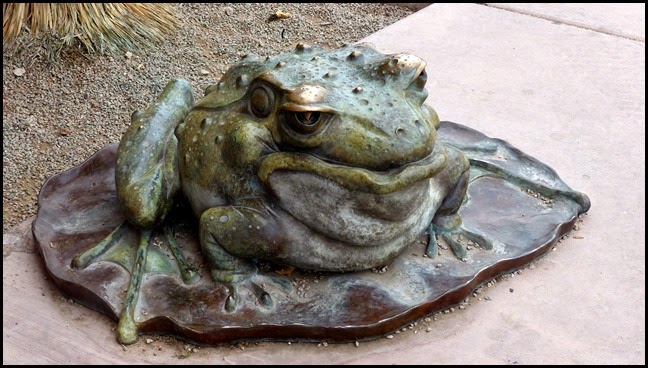 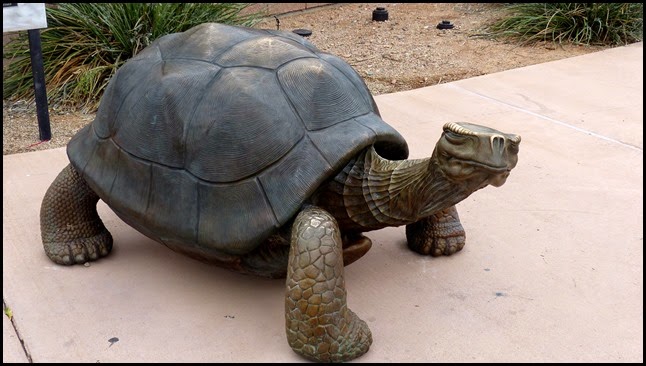 Because we washed and waxed the car on Wednesday, it rained for hours Thursday morning. Good news for the parched desert, and I had a routine doctor’s appointment anyway, along with some shopping at Whole Foods and Trader Joe’s on the way home. Just after we got back Suzanne pulled in, spending a few nights here before flying back to Texas to take care of family matters.

We took a late afternoon walk on the Bluff trail where she caught us up on all the hikes the gang did after we left Utah. Sounds like we missed some fun and challenging adventures. 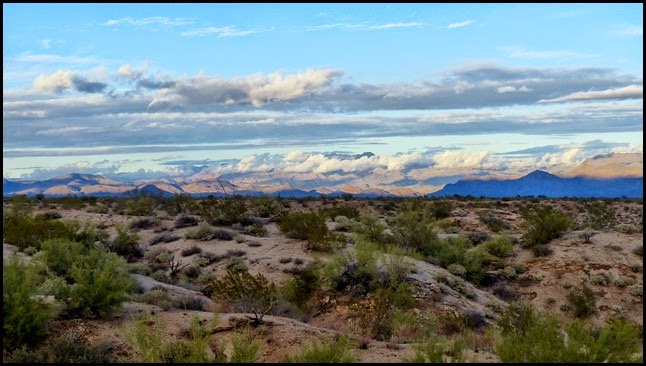 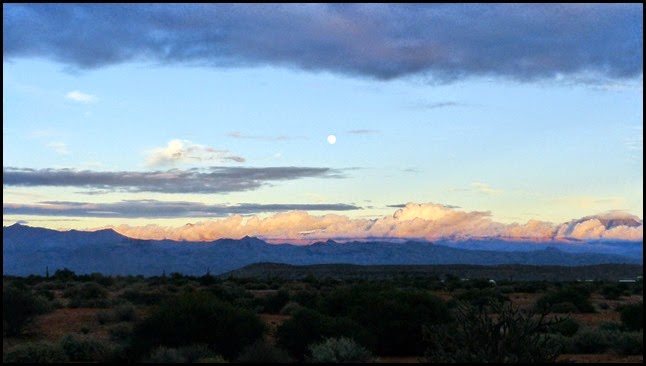 Jim twisted Suzanne’s arm and made her take his bike for a ride on the trails with me. We rode my favorite 10 mile loop and she did great for her first time on a mountain bike. She agreed with Jim about the uphill sections being a bitch, but said she felt like a kid again flying along the curves and dips on the downhill. I think I see a new bike in her future.

On another note, when Millenicom folded we ended up going with a Verizon 20GB plan for $99/ mo plus taxes with no contract. After our first month with them, we had gone over by 6GBs. Jim has data usage tracking on all our devices and our numbers don’t match theirs. In fact we can’t figure out how we could have even downloaded the huge amounts they said we did in short periods of time. We were in Virgin, UT then and had a slow connection so it just doesn’t even seem possible. Jim called and the Verizon rep pretty much said their data tracking is accurate and that’s that.

So Friday we received a new 4GLTE/XLTE Jetpack (our old mifi device was having some problems anyway) and are “renting” an unlimited plan from an individual for $120/mo. It seems to be working fine so far, but we’re just going to suspend our other plan in case something unforeseen happens with the unlimited plans over the next 90 days. It will be so nice not to have to worry about this, since we apparently can’t keep our usage under 20Gs. Time to go surf the net…