It’s been a busy last week here at McDowell Mountain Park. Alex and Ellen came back to stay in overflow for a while, Mark and Bobbie showed up to join them a couple days later. We had a nice visit with Dave and Sandy, Lazy Daze owners who are staying here. And Hans and Lisa arrived Tuesday. We also had a couple more doctor appointments, a cat day, and a car problem. Still managed to squeeze in some bike rides and a hike.

Sad news to report that at happy hour the other night I went to show someone the hummingbird nest and it was gone. We looked all over the ground but it wasn’t there. Guessing maybe a raven came and took it for the eggs but who knows.

I forgot to mention in the last post that a good friend of ours from Indiana died after suffering a skull fracture and brain bleed from a fall. We’ve known Doug since the 80s, and last visited him in Indianapolis back in 2011. He and Jim had been emailing about some things just a week or two before the accident. Hard to believe he is gone, and at the young age of 58. He was a very good artist, and had a booth at an arts festival when we visited. 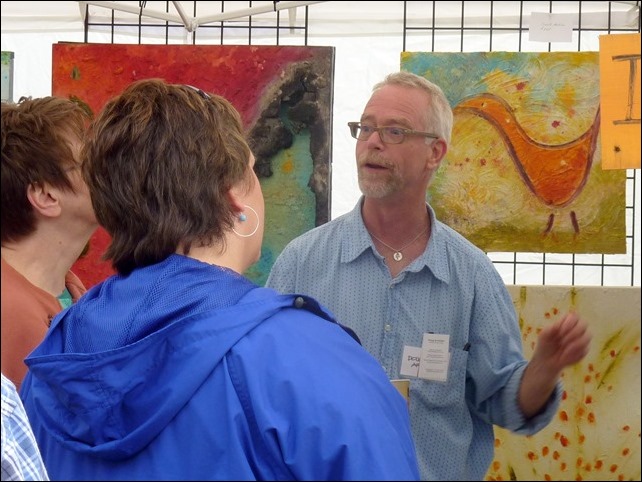 Last year we met Kurt and Toni, fulltimers from the Phoenix area, and had a few beers at a brewery in Ketchum, Idaho in August. When we arrived here at McDowell in November they happened to be here, also. Just read on the blog that Toni died last month, at the age of 56. It is so easy to take things for granted, but we just never know when our time is up on this earth.

On a happier note, the flowers are putting on quite a show around here. Bobbie, Mark, Ellen and Jim on the Scenic trail. 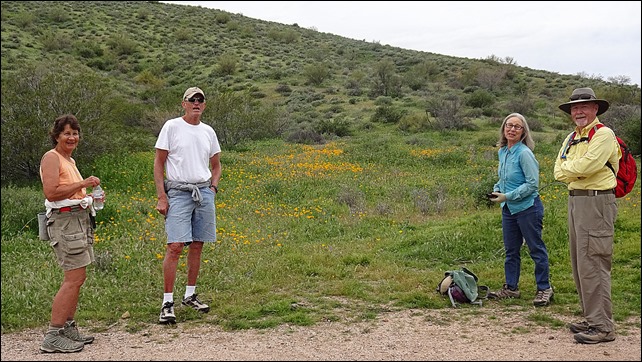 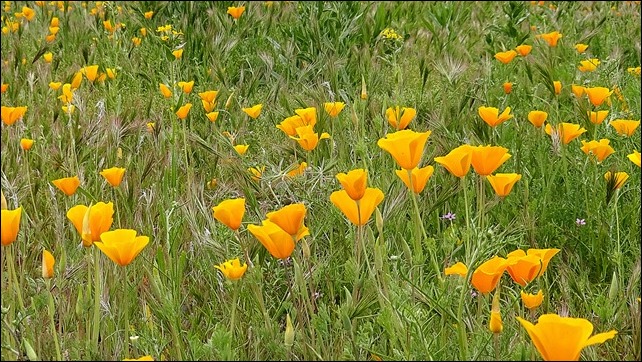 Some photos from a 30 mile bike ride with Mark and Bobbie, and Ellen. Jim missed the ride due to an issue with the Subaru, and Alex was in the middle of removing and replacing caulk on their RV. They missed a fun and beautiful ride through McDowell Mountain Park and into the McDowell Sonoran Preserve around Granite Mountain. 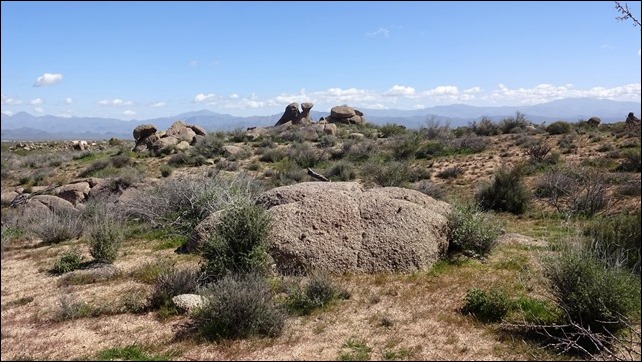 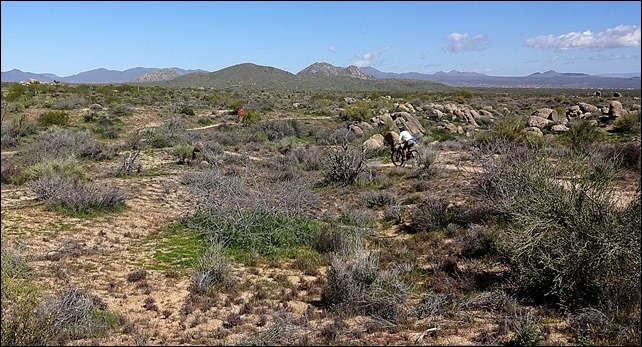 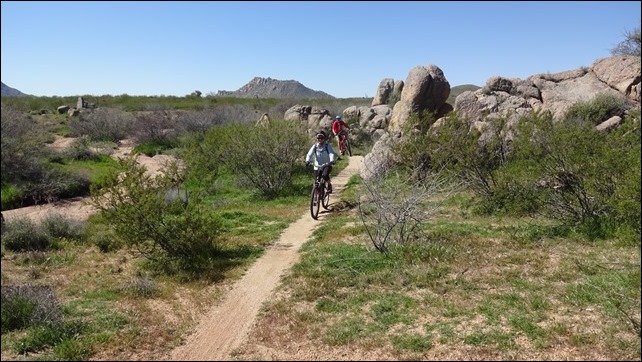 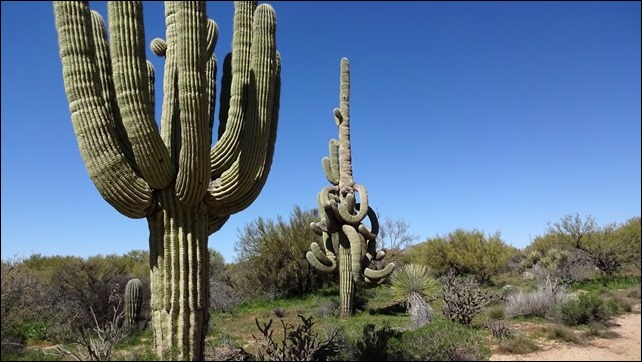 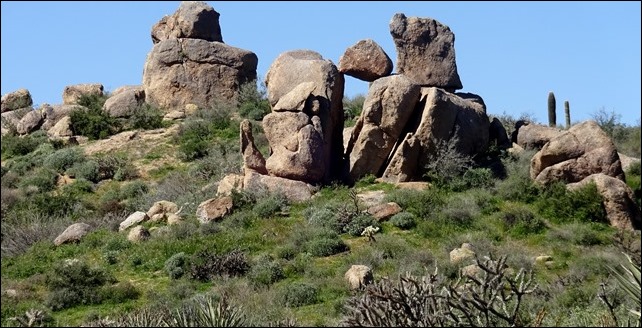 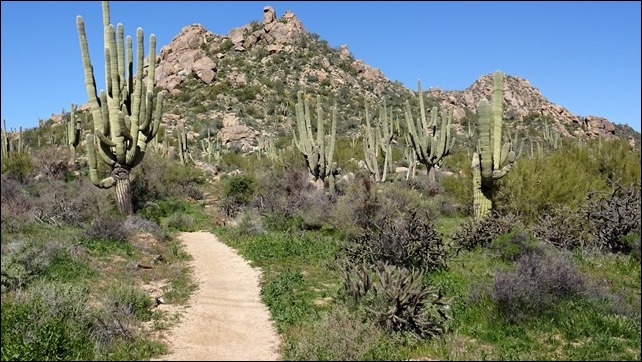 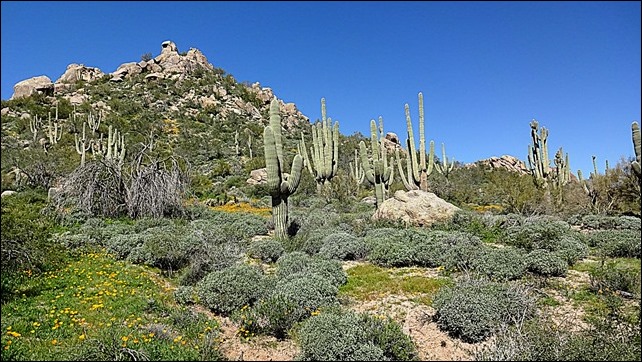 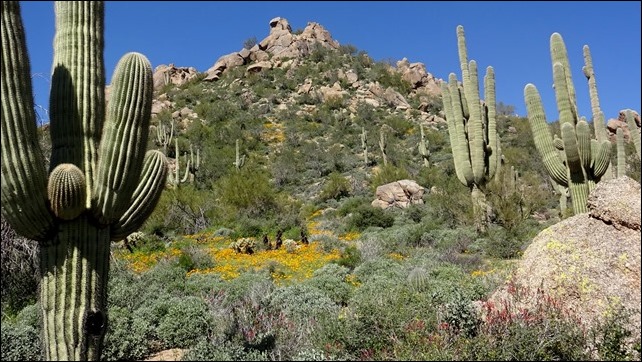 Ellen and Bobbie taking a break. 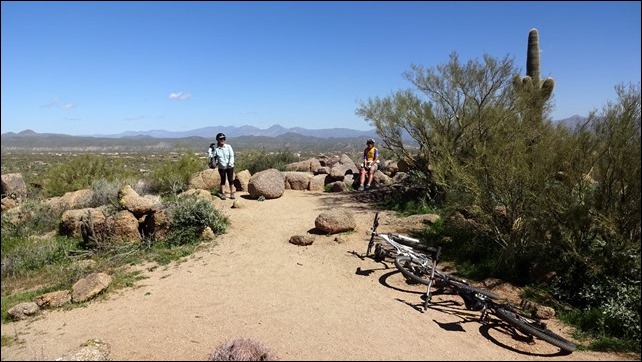 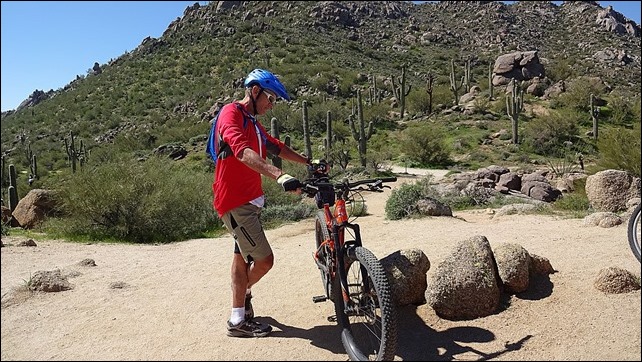 Found another crested saguaro but couldn’t quite get close enough. 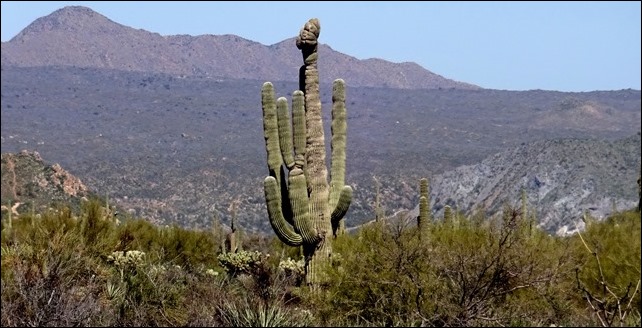 The Subaru problem turned out to be a sensor in the gas tank. The check engine and various other lights came on and stayed, and the gas gauge read empty. Luckily it was still driveable, but it took three trips to the dealer to get diagnosed, take it back when the parts came in, and to pick it up yesterday. They did give us a loaner but it was still a hassle and a bit unnerving wondering if it would get fixed before we left today. And cost a whopping $700! We first thought it was rodent damage, as the day it happened Jim looked under the hood and found droppings and pieces of insulation chewed off from under the hood, but apparently they were just gathering some nesting material.

Tuesday was our last day at Fearless Kitty. Four months and we are not leaving with another cat, although we’re sure some of you were betting we would. I think Elvis and Sophie cured us of wanting any more cats while we live in an RV, although there is no shortage of cute ones out there needing homes.

Oro is one of my favorites, but I love them all. 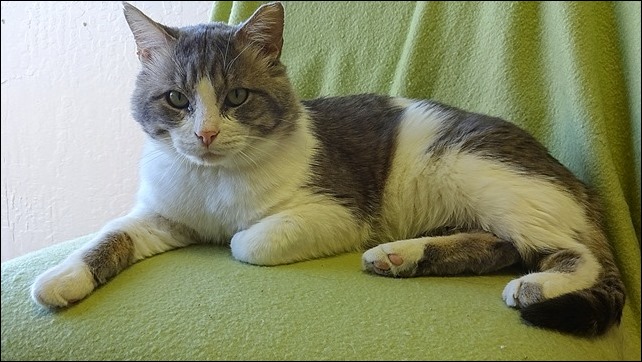 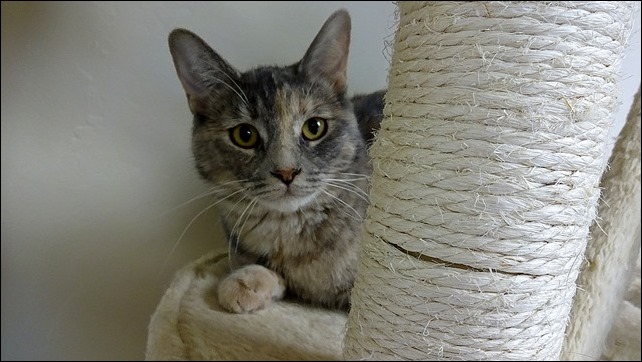 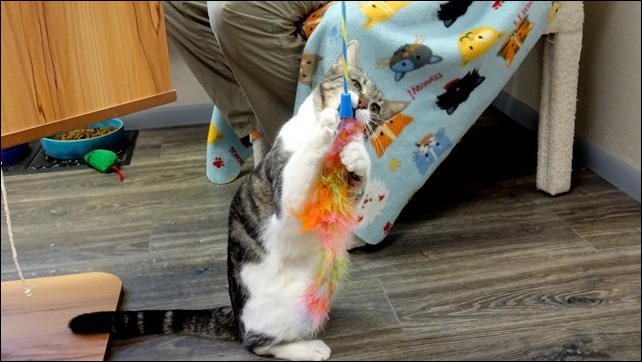 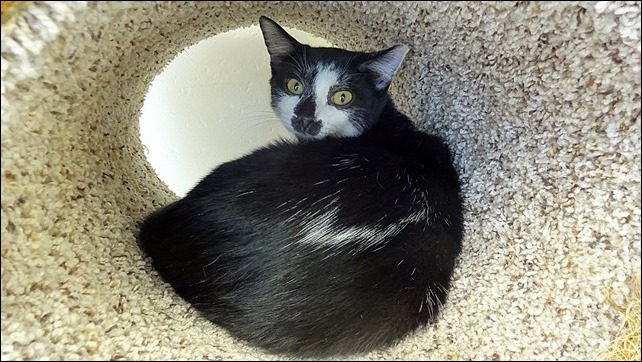 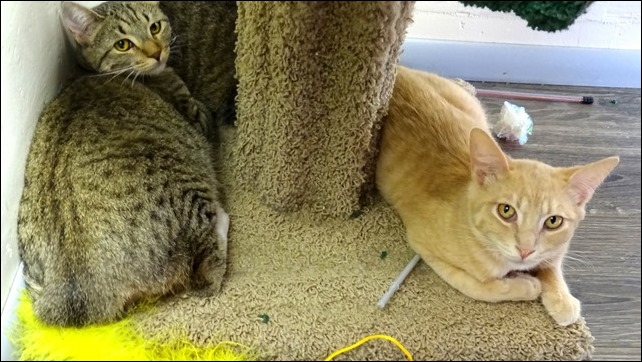 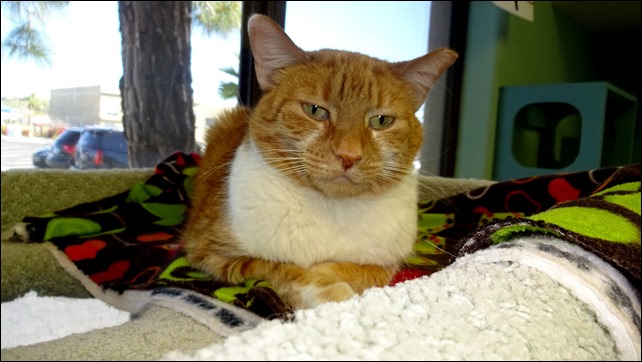 This is Jim’s buddy, Zorro. No danger in us adopting him, as he likes to pee in inappropriate places, but he’s been doing better. 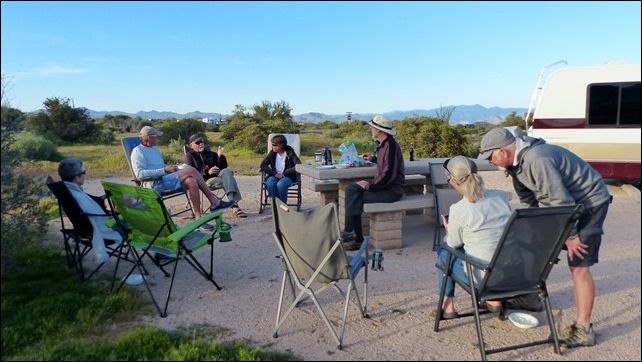 Today we’re heading to the west side of Phoenix for a long-awaited face to face meet-up with virtual blogging friends. It will feel good to be on the move again.