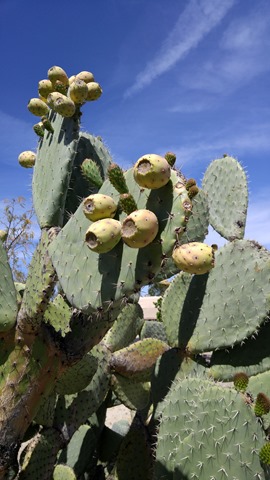 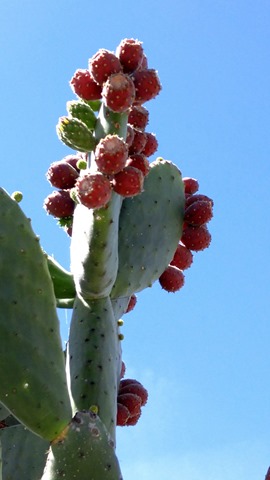 Hard to believe our 28 night stay at Jojoba Hills has already come and gone. It was a fun month hanging out with good friends, and we had just about perfect weather.  Above are a couple of cacti found in the park, and below are Tommy (age 33) and Tammy (age 70), desert tortoises that belong to one of the members. Tommy loves eating roses out of your hand. 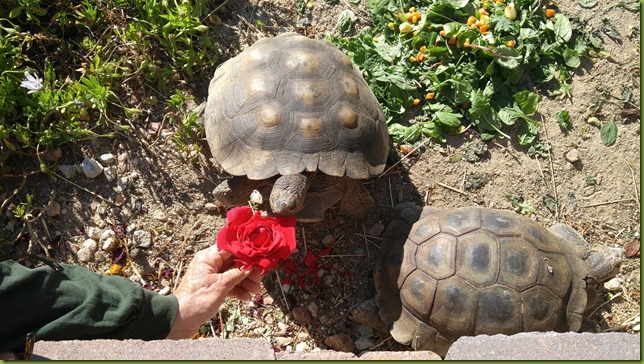 Besides pickleball, working out, a few more hikes, and socializing, Jim also has been setting up the new Asus computer which we bought last week. One of the hinges broke on our two and a half year old Dell, and after much research Jim realized trying to repair it was beyond his skill level.  It is still opening and closing, but from what he read this is not an uncommon problem, and eventually gets to the point where it gets stuck and the lid will not move. So he decided just to get a new one before that happens, and once he gets everything transferred over he will try taking apart the Dell to determine exactly what parts need to be ordered so he can attempt to fix it for a backup.

One day we hiked a few miles of the Pacific Crest National Scenic Trail just west of Warner Springs, CA. 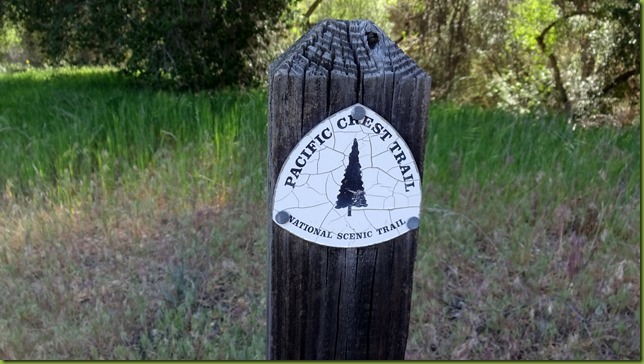 It wasn’t the most scenic part of the trail we’ve hiked, but it was a good test for Terry and LuAnn, who were both wearing new hiking boots. We saw a few people out on the trail, one group of three who are attempting to thru-hike the entire 2,650 mile trail. It starts at the Mexican border near Campo, CA and ends in Washington at the Canadian border. They have a long way to go. 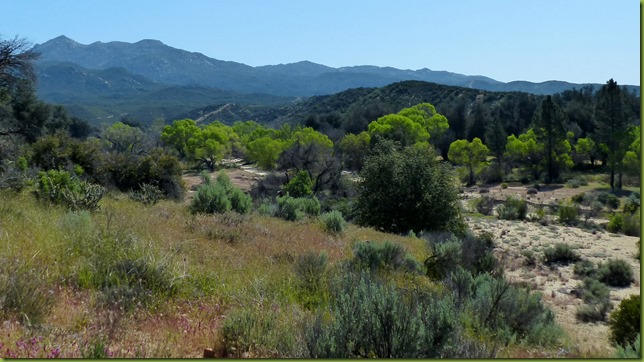 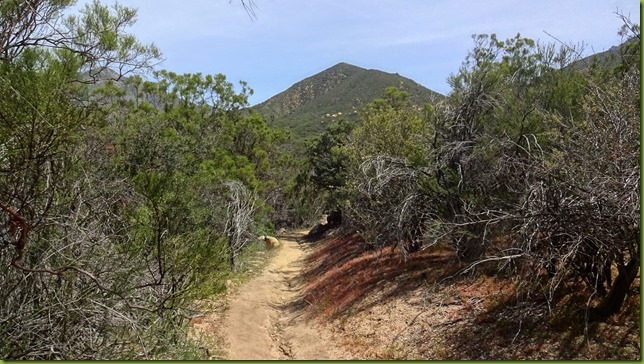 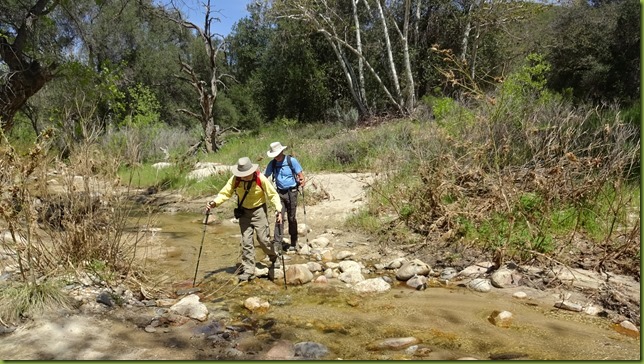 Our big wildlife sighting of the day was this tarantula hawk, a type of wasp with a sting that is said to be the most painful of any insect found in North America. Hope to never find out what that feels like. 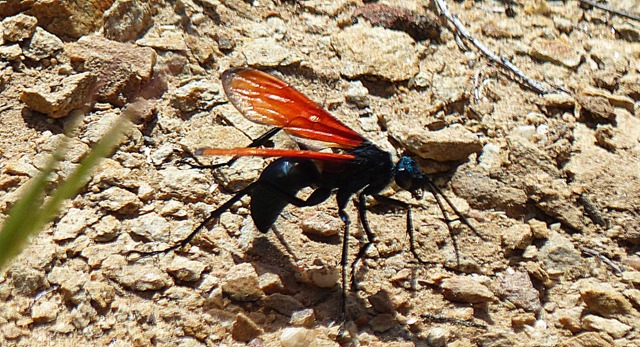 Another day we took a drive 25 miles north to Hemet, home of friends George and Tina, whom we camped with in Idaho this past August. They took us on a lovely 7 mile hike from their house through the maze of trails in Simpson Park, joined of course by dogs Jessie and Jax. Jessie the border collie lives for hiking. 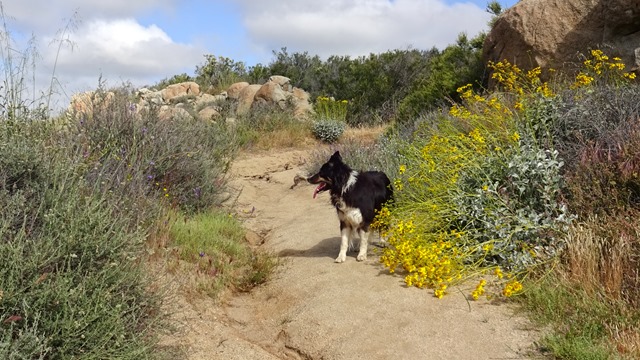 Jax, a long haired dachshund, was more interested in finding a cool spot in the shade. 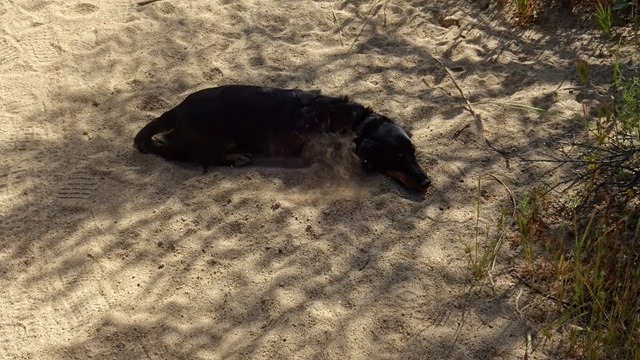 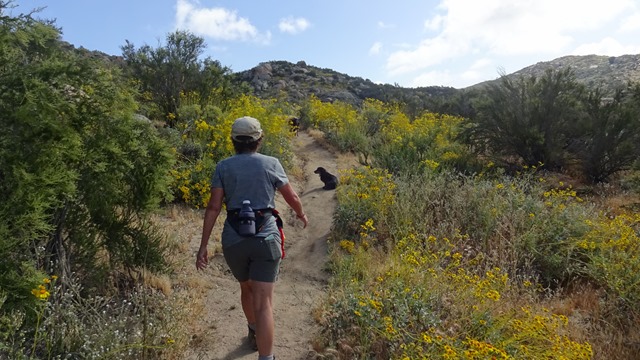 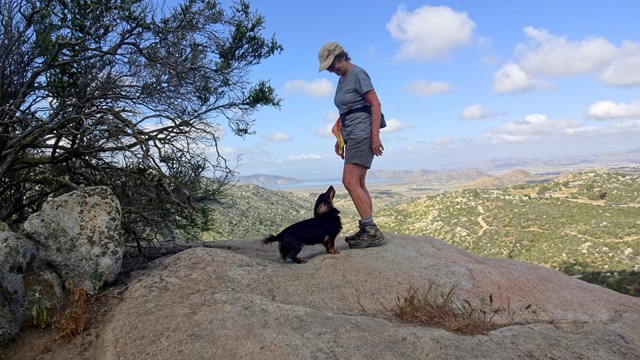 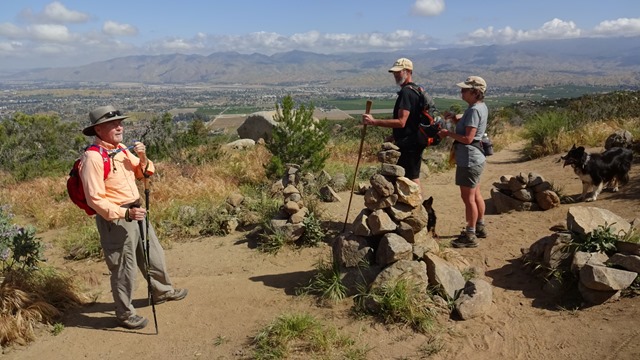 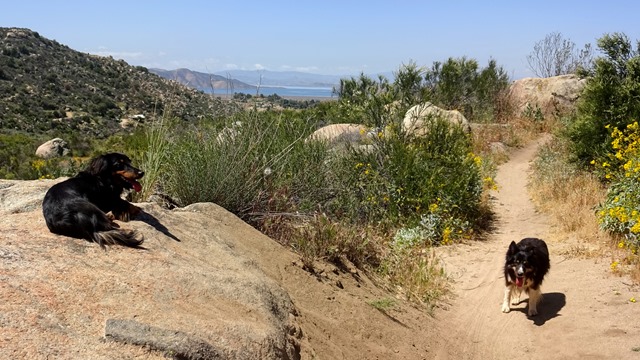 We really enjoyed this hike, with quite a few flowers still blooming, and great views all around of the San Jacinto Valley and the San Jacinto and San Bernardino Mountains. 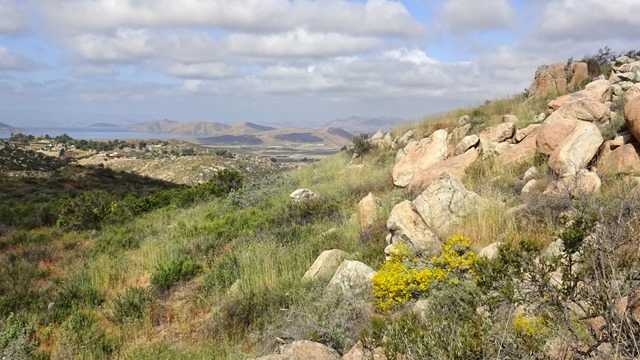 To the left is Diamond Valley Lake, one of the largest reservoirs in southern California. 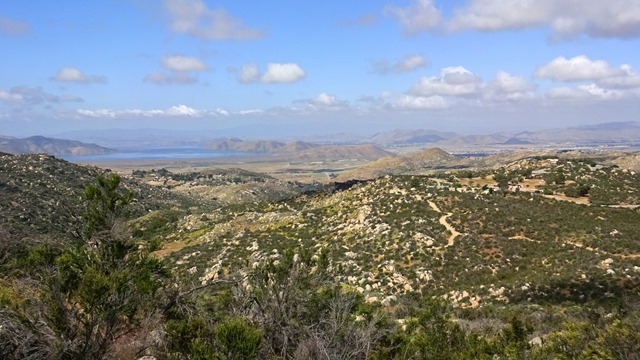 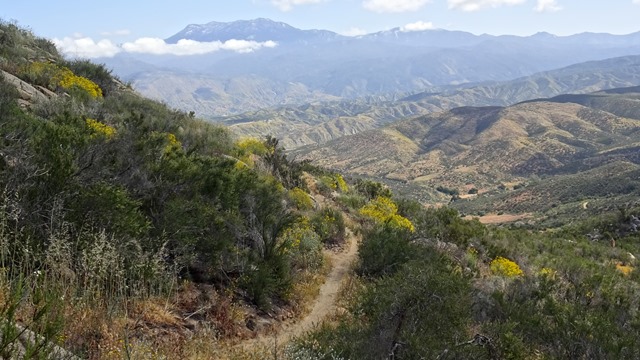 And Mount San Gorgino, at 11,500’ is the highest peak in southern California. It’s somewhere over there covered in snow. 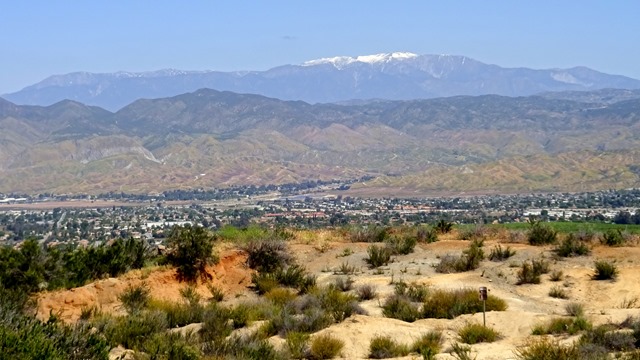 On our last day we did one more hike with Terry and LuAnn, this time on the nearby Dripping Springs trail, which we’ve done before. It makes a 20 mile loop with the Wild Horse trail, but that’s a bit too long so we just went out a few miles and turned back. After crossing a creek, it’s a gradual uphill along switchbacks, with more good views. 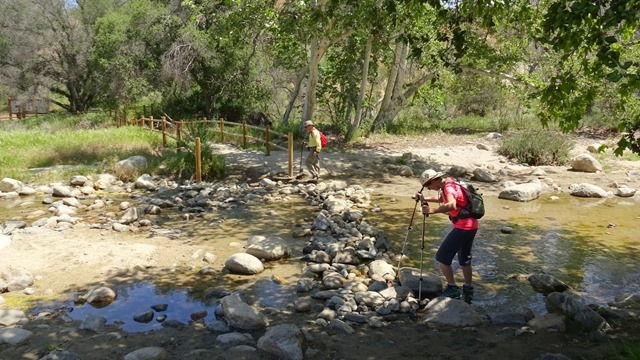 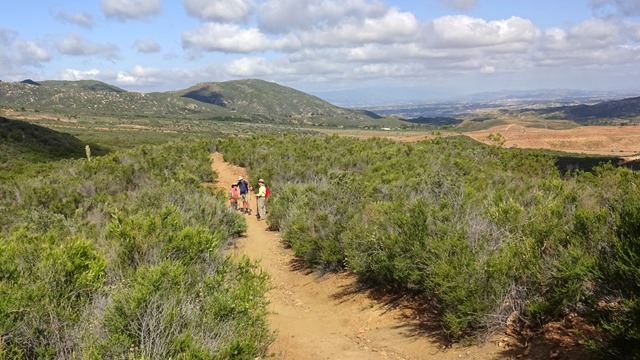 Looking down over Vail Lake. 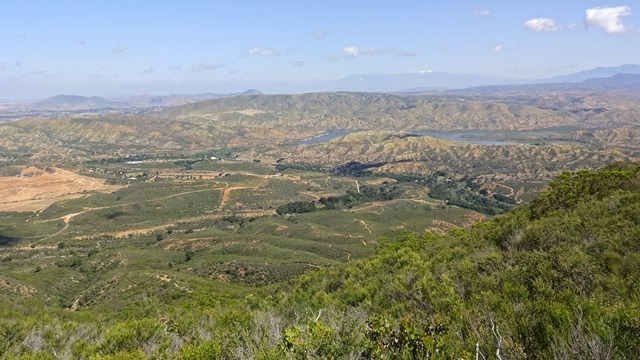 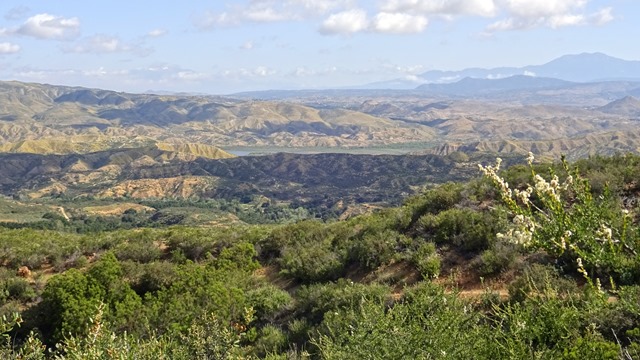 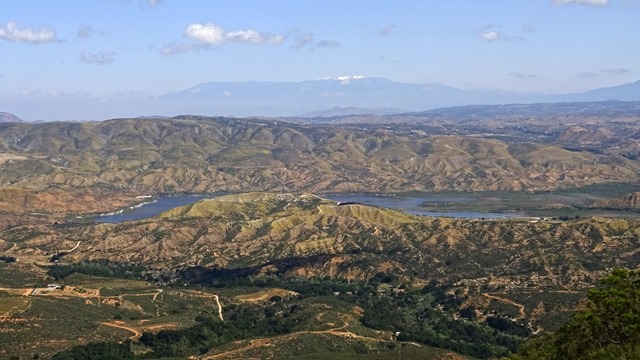 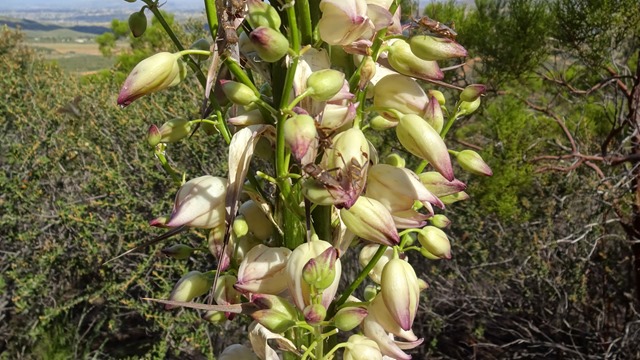 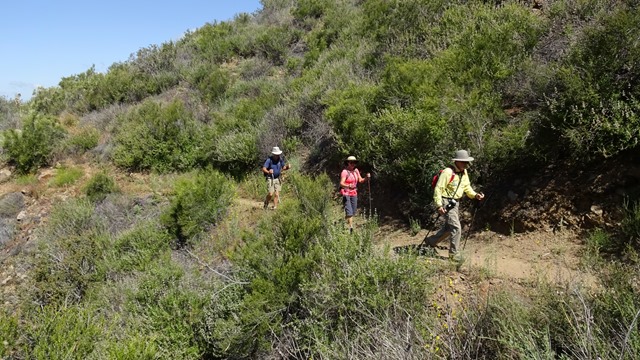 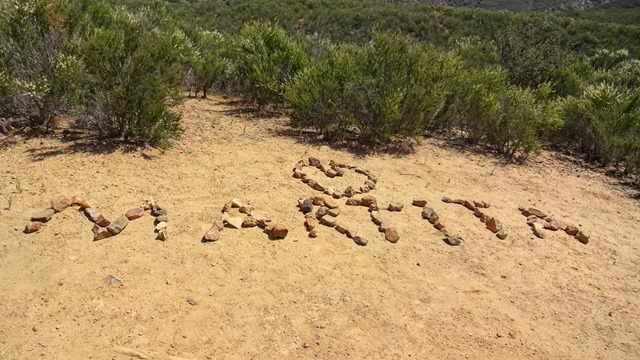 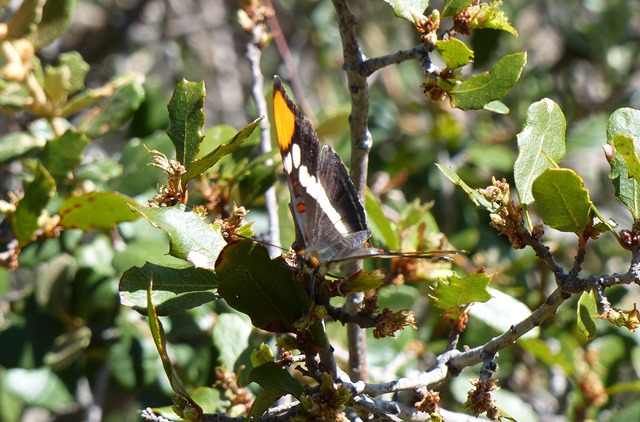 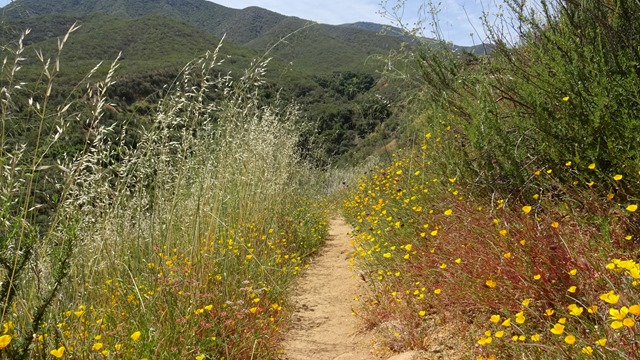 Although we don’t normally drive that far in one day, yesterday we traveled 300 miles to Glendale, on the west side of Phoenix, to get our propane leak checked out by D&R Family RV, the place that installed the propane line for our Kozy World heater back in 2010. Spent the night in their gated yard, and as I write this the tech has discovered two loose fittings. Now Jim has him working on wiring one of the 12 volt outlets on our dash so it runs off the house batteries instead of the engine battery. When we get finished here we’ll head back to McDowell Mountain for a week or so.