Back to Durango, CO 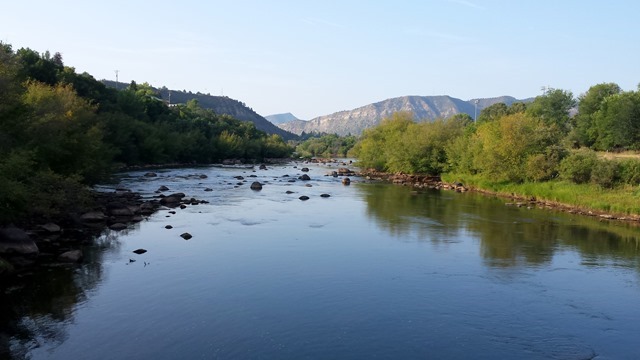 Since we had to cross 10,800’ Wolf Creek Pass on the way to Durango, I drove the car separately and  hooked it up when we got to Pagosa Springs at the bottom of the pass. It was the first time we’ve hooked up in months, since every move we’ve made this summer has taken us over high elevation passes, made much easier without the Subaru being pulled behind the Lazy Daze. It’s also easier on Jim not having to listen to me tell him how to drive on those steep winding roads.

While getting the tow bar in place Jim discovered a big tear in one of the rubber boots covering an arm. I used Gorilla Tape to temporarily fix it but he ordered a new one at a local RV place after we arrived. We’ll pick it up today and hopefully Jim can replace it himself.

We stayed at La Plata County Fairgrounds when we visited Durango in 2015 and it hasn’t changed. Still $16.50/night with water and electric but no dump. The  free city dump station at the sewage treatment plant is closed while a new plant is being built, but we hear there is one at a nearby gas station. There are only 6 sites, which have been filled most every night.

What this place lacks in ambiance it makes up for in location. Just next door is the wonderful Durango Recreation Center, which we’ve used several times. Just behind the Rec Center is the Animas River Trail, an 8 mile paved trail along the river that we’ve either walked or biked almost daily. 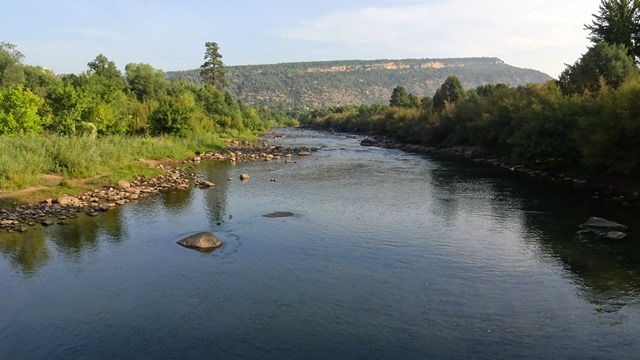 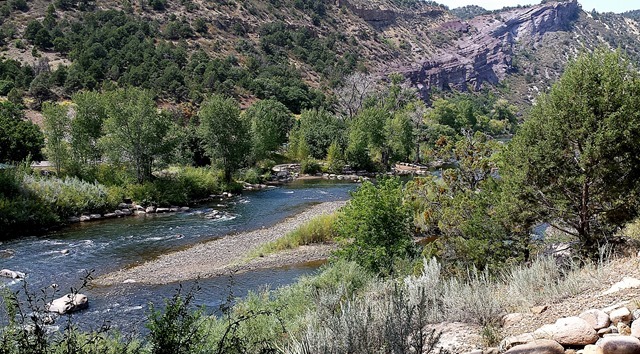 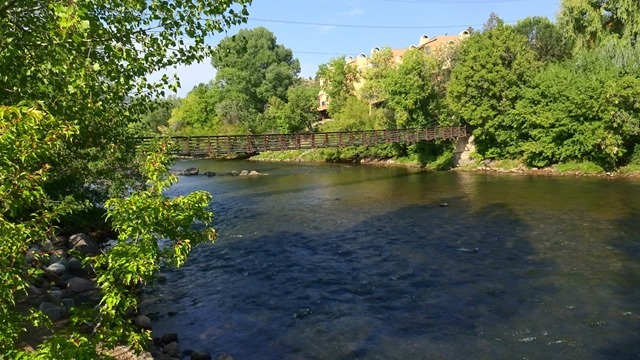 We’ve walked the couple miles to downtown twice so far, once to the Saturday farmer’s market, and another evening to Carver Brewing Company for dinner. We stopped by there for happy hour the day we arrived and were given coupons for a couple free beers since the bartender/manager didn’t charge us happy hour prices. She would have changed it but asked if we were going to be in town for awhile and would we like to come back for a free beer. Sounded good to us. Their IPA and stout on nitro were both very good, as was the very tasty 13% ABV Imperial Russian Stout. With such a high alcohol content we had to split that one.

Yesterday we drove 47 miles north to Silverton to meet up with our Ouray friends Box Canyon Mark and Bobbie. The weather forecast was calling for afternoon thunderstorms so we met them at 9:30 at the visitor center and let Mark drive us the 9 miles to the Highland Mary Lakes trailhead up a rough dirt road with a couple of stream crossings. We always marvel at the places Mark will drive their Subaru.

We were surprised by how much the aspen leaves are changing at the higher elevations. 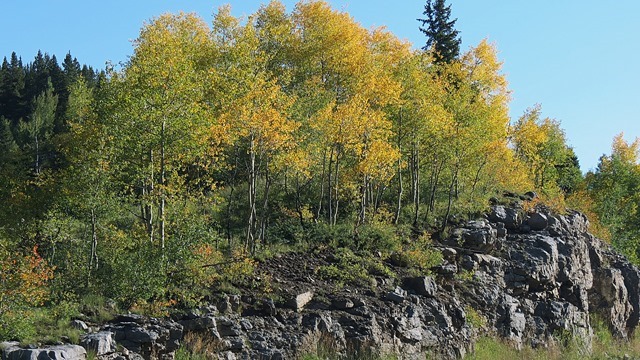 Hwy 550 is down to one lane for construction about two miles from Silverton so we got delayed for about 10 minutes. At least it was a scenic spot to wait. 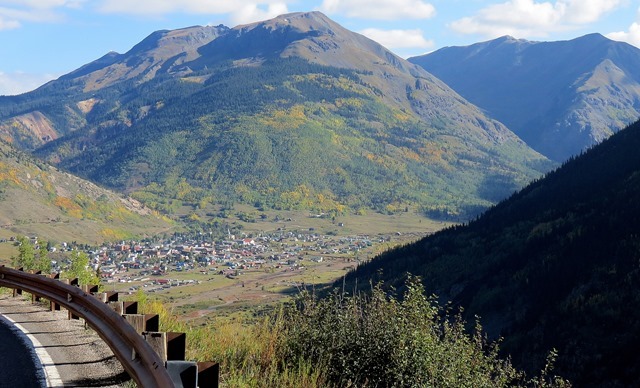 The Highland Mary Lakes trail starts in Cunningham Gulch at an elevation of 10,700’. You know it’s going to be a beautiful hike when the scenery at the trailhead looks like this. 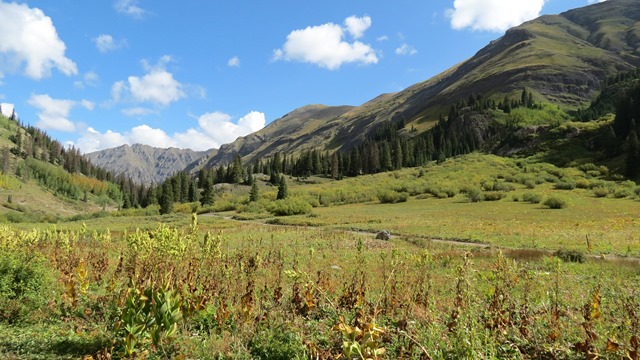 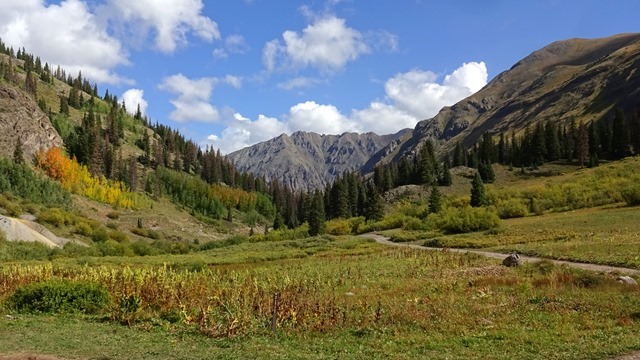 The trail immediately starts climbing through the forest, but there were plenty of photo ops along the way for us to stop and catch our breath. 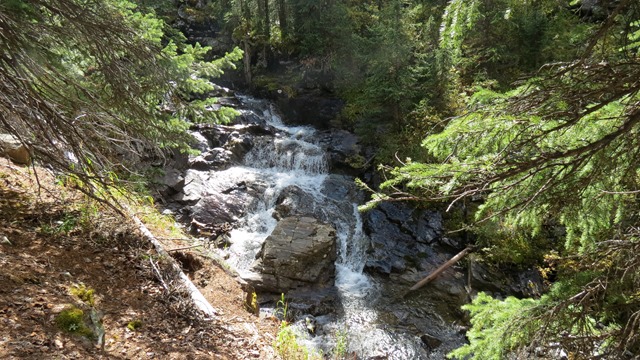 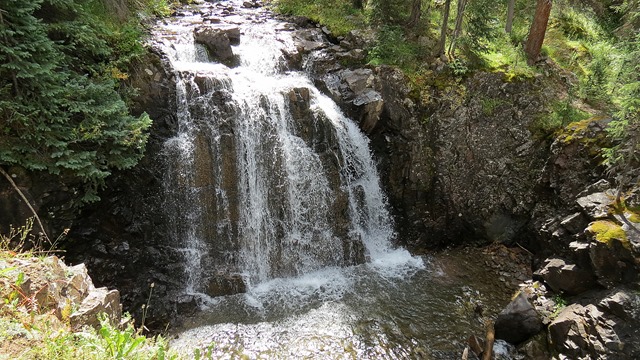 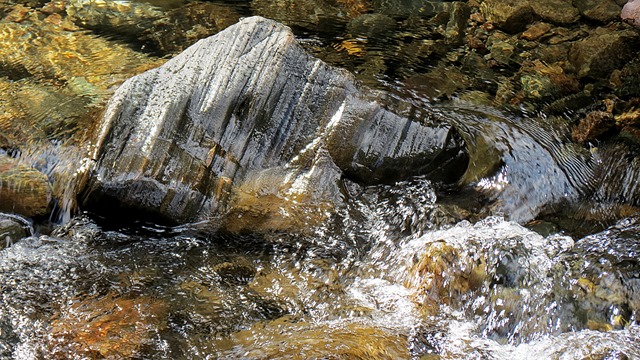 Bobbie could use some longer legs. 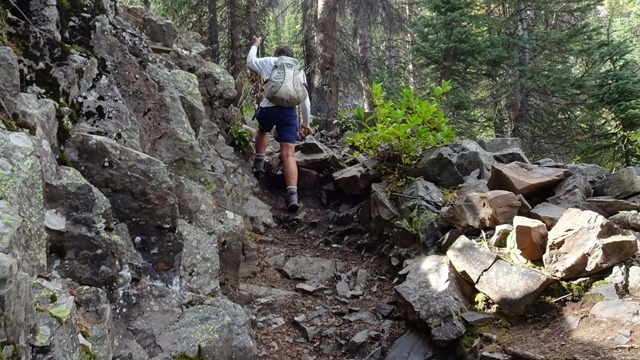 There were many steep climbs but usually after it would level out for a short time. 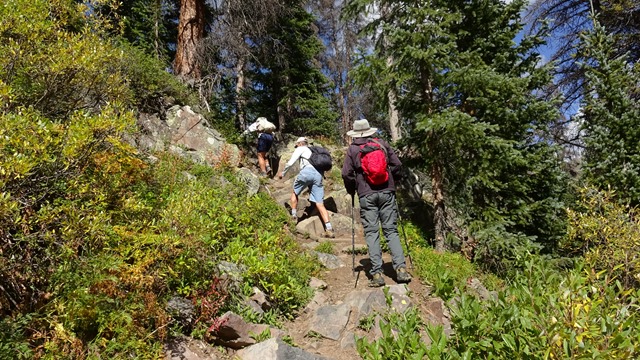 It was surprisingly warm for September at such a high elevation, but an absolutely gorgeous day. 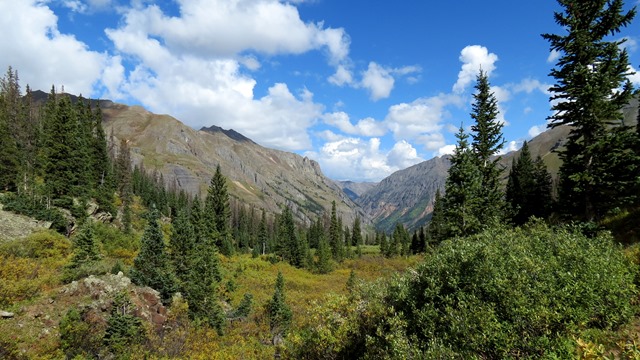 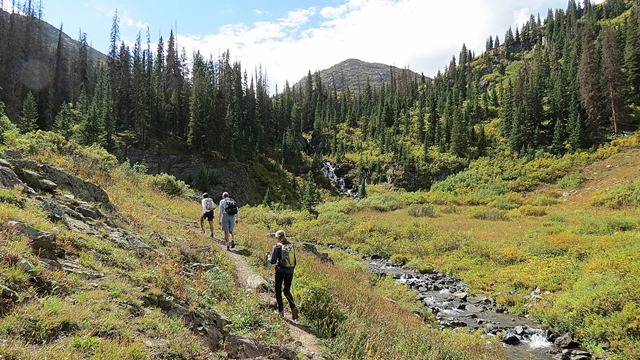 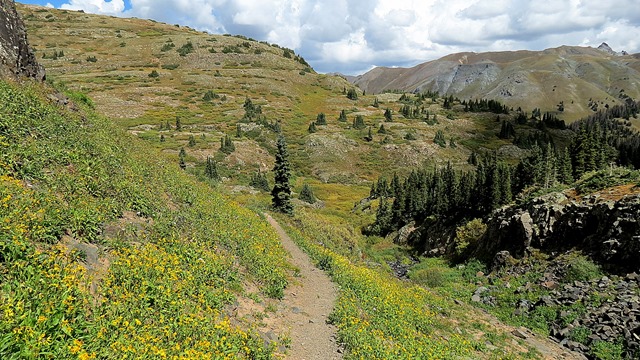 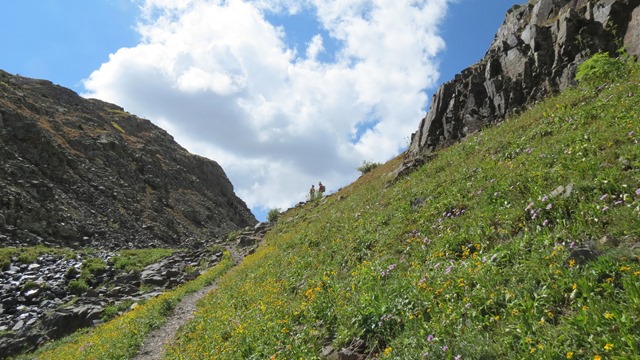 Well, except for those dark clouds beginning to form. 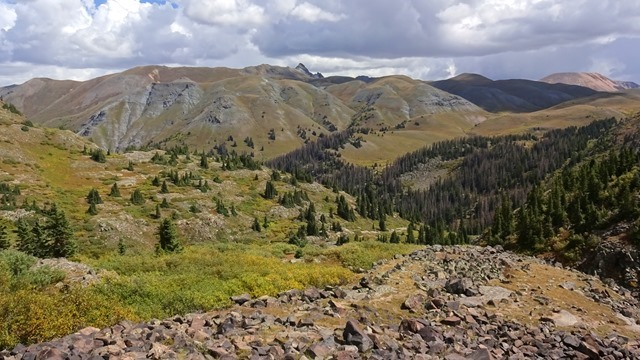 Although we were almost to the first lake, Jim decided he wasn’t in the mood for tackling these rocks. Bobbie said it was less than 100 yards of it but to me it felt like a hundred miles across. 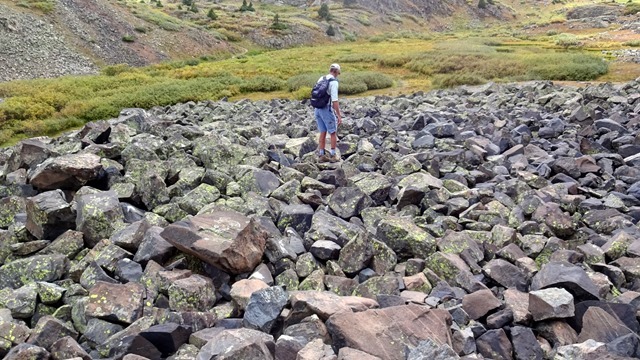 Jim played with pikas while we went on to the lakes. 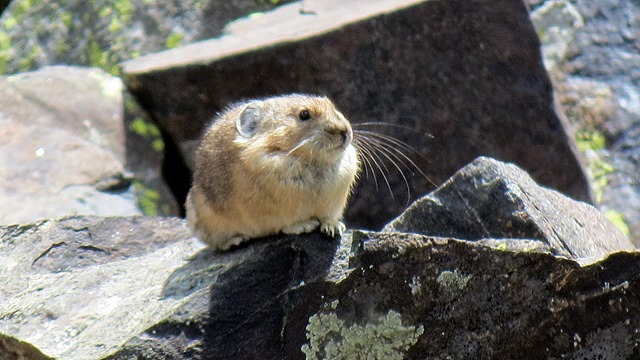 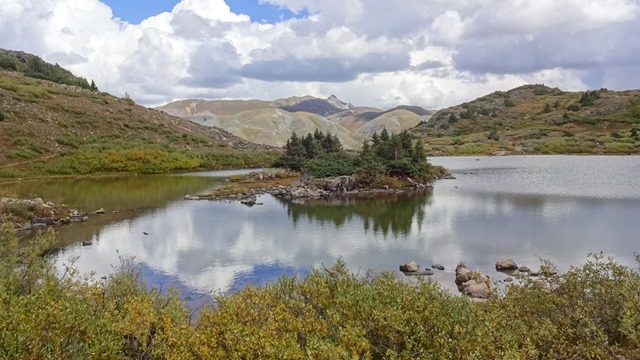 It was worth every step and gasp for breath. 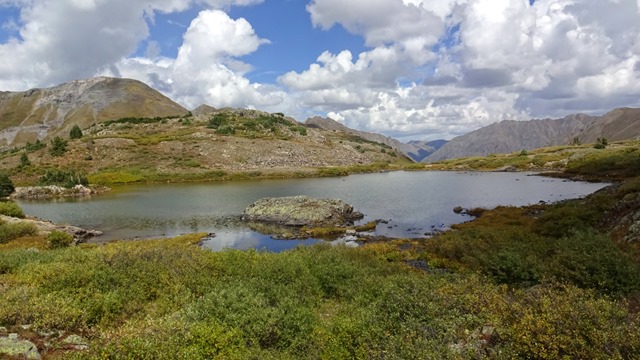 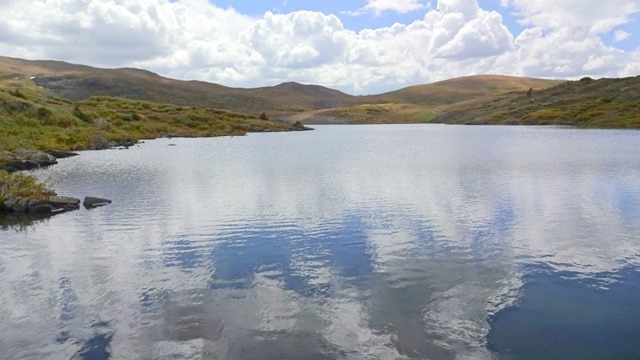 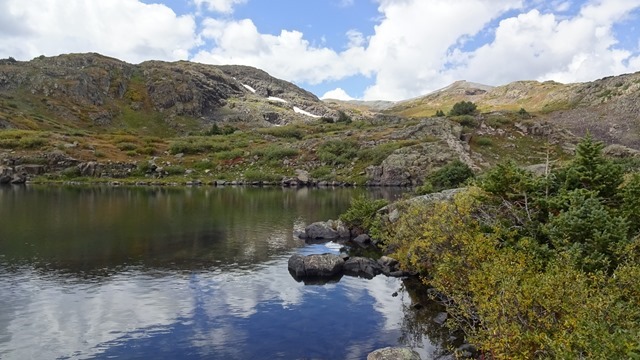 Happy hikers Mark and Bobbie. This was probably the easiest hike they’ve done all summer. 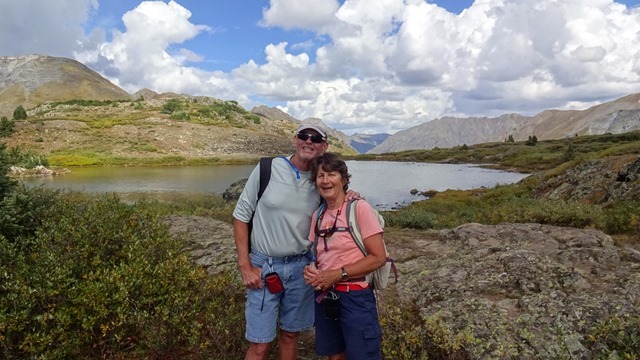 Had the weather cooperated it would have been nice to continue on another mile to Verde Lake. You can also make a loop of 7.5 miles. It thundered just as we were heading to the second lake so we thought it wise to turn back. Luckily we did, as the rain and hail started just a couple miles from the trailhead on our way back to Silverton, hail that accumulated on the road like snow.

We capped off the day with a pizza and beer at Avalanche Brewing Co. It was a great day and we hope to try and meet up for one more hike before we leave Durango next week.

This is why I don’t take many selfies! 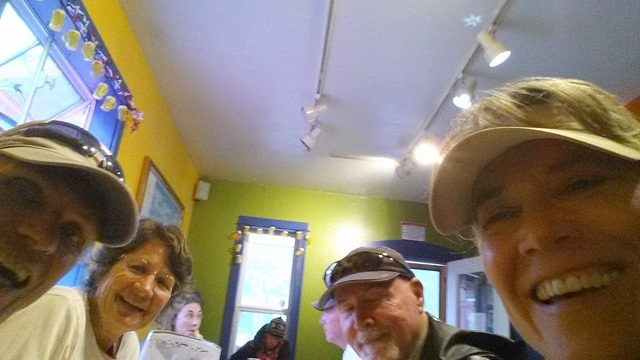 On the way home we stopped at an overlook to take a few more photos. It is just so very picturesque around these parts. 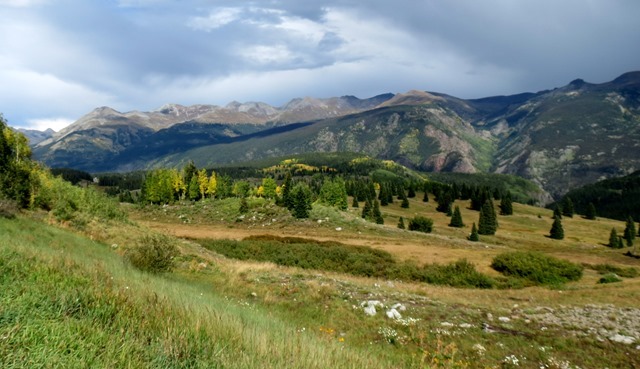