Although not anything major, we have had a lot of little things break down recently. Jim thinks more things go wrong living in an RV than when we lived in a house, but I think he’s just blocked those bad home ownership memories. 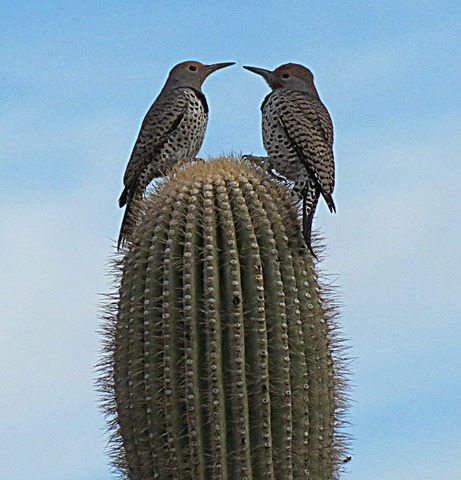 About a month ago the in-dash radio of the Lazy Daze quit working. Jim ordered a cheap used faceplate from Ebay and at first it worked fine but after using it a few times it would not turn on again. After lots of wiggling it came on again so we are just leaving the power on. Scott, the RV techie guy who worked on our inverter last year was doing a TV install for one of the camp hosts here so he stopped by to look the opening and will get back to us on a replacement. We may combine it with a backup camera monitor but haven’t decided on that yet. 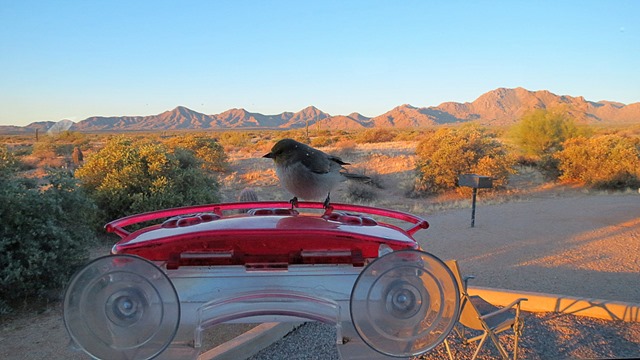 A day or two after we arrived at McDowell last week the water pump quit working. We typically don’t hook up the hose to city water but just fill our tank and run off the pump. We’re so used to camping without hookups we forgot we could just connect the hose to the city water inlet, which Jim remembered just as I was about to go fill up some jugs to use until the next morning when we planned to install the spare pump we carry. A senior moment for sure!

Once the water was connected we heard the pump cycle, as we had forgotten to turn it off. It continued to work intermittently for a few days, but finally quit altogether. We ordered a new pump as the spare is an old one that Jim repaired, since he decided he would rather just install a new one and keep the other as a spare if we are ever in desperate need. It should arrive this week.

A few weeks ago I found some water in the cabinet under the kitchen sink. I felt all the plumbing connections but everything seemed to be dry. Then I realized the water smelled like vinegar, so I thought a bottle of window cleaner had leaked. I forgot about it until yesterday when I discovered even more water on the shelf, and this time saw a drip coming from the connection under one side of the sink. After pulling everything out and drying it off I also discovered a leak on the other side. Of course Jim didn't have a wrench big enough to tighten it with so we had to make a stop at Lowe’s for yet another tool to add to his collection. After tightening things up so far both sides are staying dry.

I also got a flat tire on my bike, which will only hold air for a day or so, and we finally remembered to stop by a bike shop today for another tube. I have gone out on a few rides and it’s held air, but I do carry a pump just in case.

There’s a new picnic shelter at the intersection of the Delsie and Pemberton trails since the old one collapsed last year after heavy rains. It’s decorated with hanging beer cans, and a retired mountain biker. It hasn’t rained here in over 80 days so everything is really brown and dry this year. 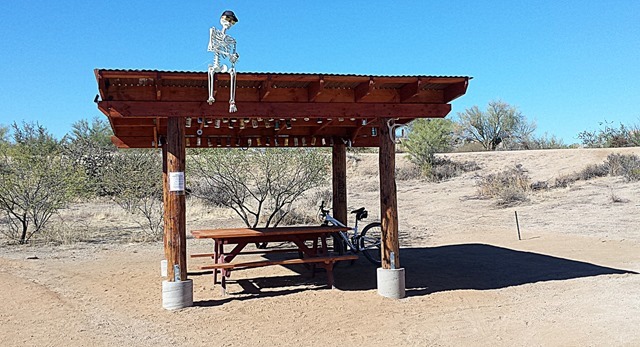 I couldn’t get the toaster to work the other day and tried plugging it into the other plug where it worked. Later I tried it again and it worked in the first outlet. I made the mistake of reminding Jim he needed to check it as we were laying in bed around 10:30 last night, which got him worrying about it so he got up and took a look. The outlet looked fine so maybe the toaster is on its way out. Just one more little annoyance.

On a positive note, Jim was able to access our Progressive EMS box and check to be sure all the connections were tight. After Debbie’s experience we were a little concerned, but everything looked great inside of ours. 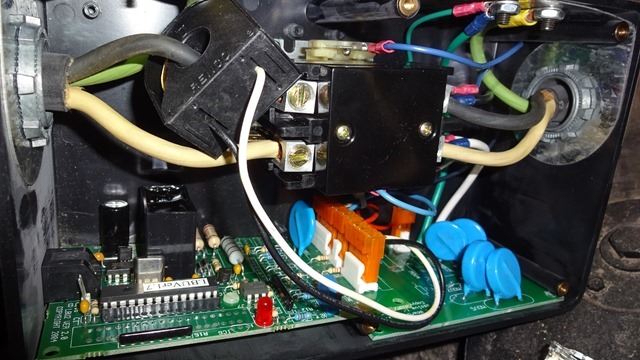 He also checked all the connections in our power management box and did find a couple screws that he could tighten just a bit.  He tries to do this once a year but doesn’t always remember. 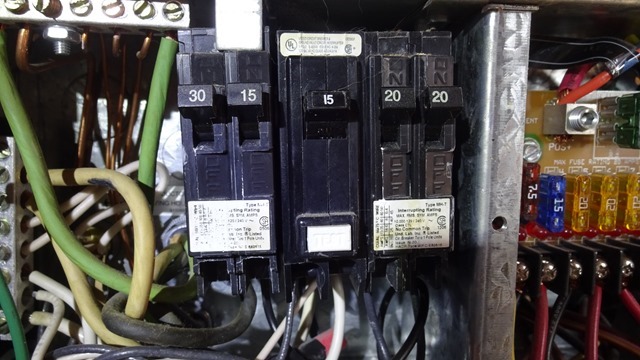 Debbie finally got her new EMS installed on Saturday, and it would not allow power into her rig. She called Progressive and they informed the tech that there is an adjustment that needs to be made. Why they won’t include instructions for the installer is hard to understand, but that was the problem and now it’s working fine.

Debbie found a very lightly used Blue Ox tow bar for sale in Casa Grande and was kind enough to go check it out for us.  It was a great buy and almost new, so we will get it from her one of these days when we meet up for lunch. It will definitely give us peace of mind having a new bar, since after we discovered how bent the old one was we would never have wanted to continue using it.

This is a Blue Ox Avail. 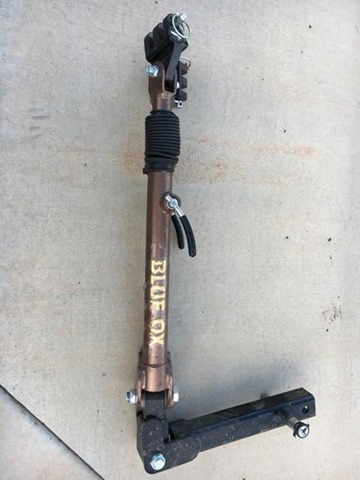 The original owner threw in a bunch of other parts, too. Unfortunately he didn’t get a cover for it, so we will have to order one, since it’s a few inches longer than our old one. 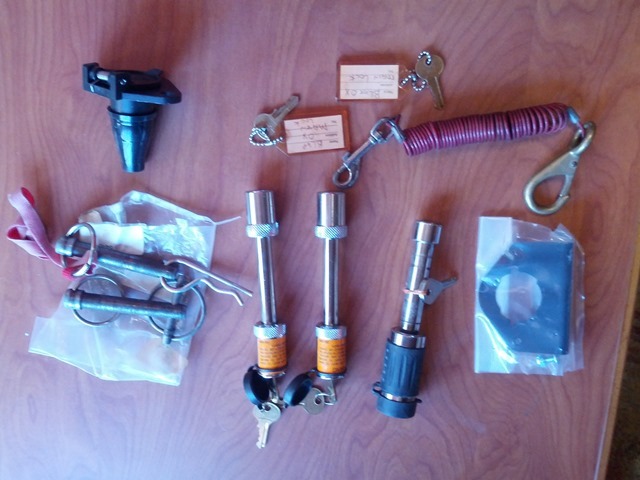 Speaking of more little things, we’ve been to Fearless Kitty three times now, and we’re having to learn the quirks and names of all the new cats. There are a bunch of cuties there, and quite a few have been adopted just in the last week. This past weekend was a big arts and crafts fair along the Avenue of the Fountains in Fountain Hills. 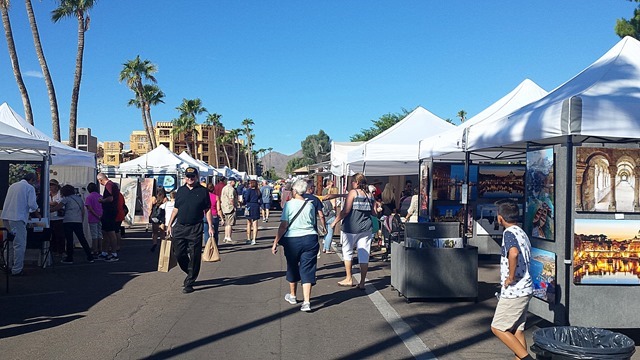 Fearless Kitty is located right in the middle of it so they had an open house during the event and ended up with seven adoptions.

One of the rooms we have to clean is now occupied by five little kittens that were saved from euthanasia at a local animal shelter. They are the most adorable little things, and being around them made me remember why we kept Elvis and Sophie when they were brought to us around the same age. Unfortunately they grow up! 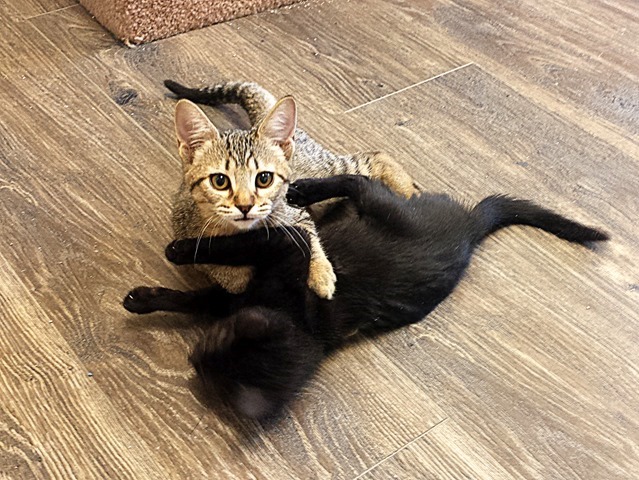 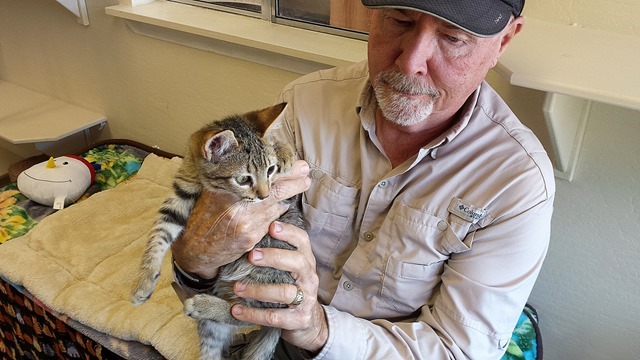 I forgot how crazy little kittens can be. Jim had them all mesmerized by the fishing pole toy. 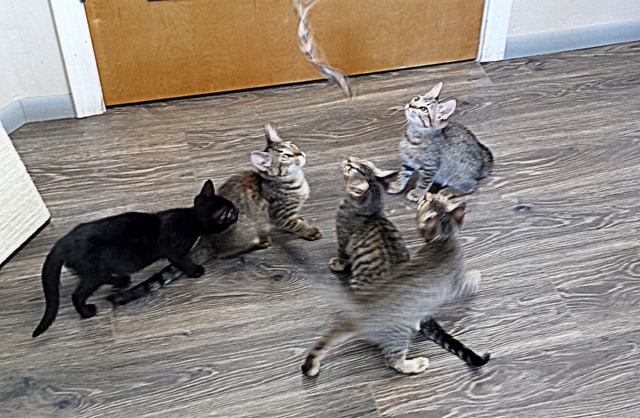 This is Ashley, one of the free roaming cats who likes to lay on the steam cleaner pads. Luckily today was a mop day, so we didn’t need to make her move. 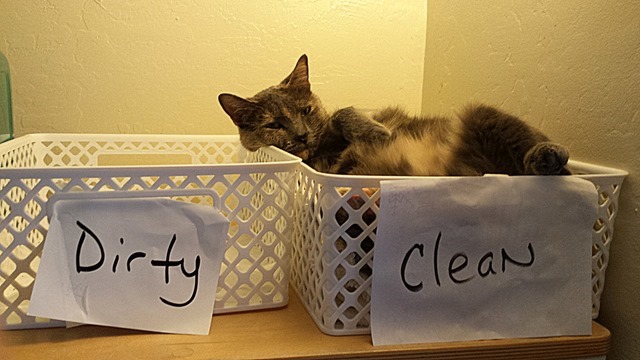 Guess that about sums up our first 10 days at McDowell. Unless something exciting happens I probably won’t be posting much since we’re doing pretty much the same stuff as the past couple of winters here. Not that it’s a bad thing, it just makes for repetitive blog posts.