On Our Way to the Canadian Rockies

We won’t know if it’s the right decision until we get there, but after a couple of phone calls with our friends Chuck and Carla, we’ve decided to just go ahead and keep our reservations and meet up with them in Jasper National Park on September 3. Jim and Carla were leaning towards canceling, but Chuck and I really wanted to go, so they agreed to go along with what we decided. The smoke has cleared quite a bit over the past week and we’re hoping it continues, although we realize it varies from day to day and could be worse again by the time we arrive.

We finally got our mail on Monday, exactly three weeks after it left Pensacola. Don’t count on priority mail arriving in 2-3 days like they say. Our absentee ballots were there, but had to be back in Florida by 8pm on election day, which was the following day, so we didn’t get to vote. We’re just thankful it was only the primaries.

On our last couple days in Port Townsend we did a hike from the RV park up the adjacent hill to the trails at Anderson Lake State Park. 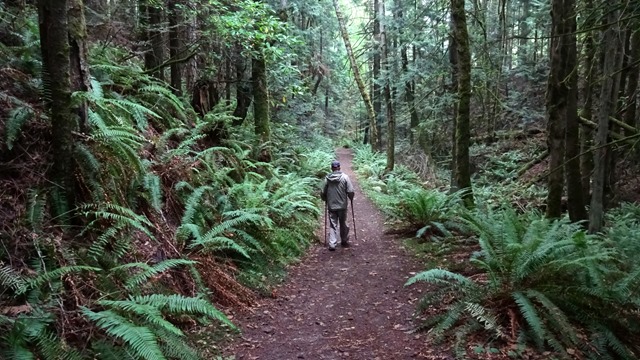 It was drizzling off and on so the lake was not very scenic. 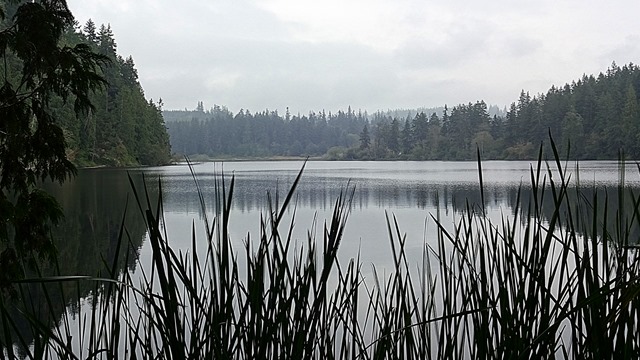 But it’s the perfect environment for fungi and slugs. 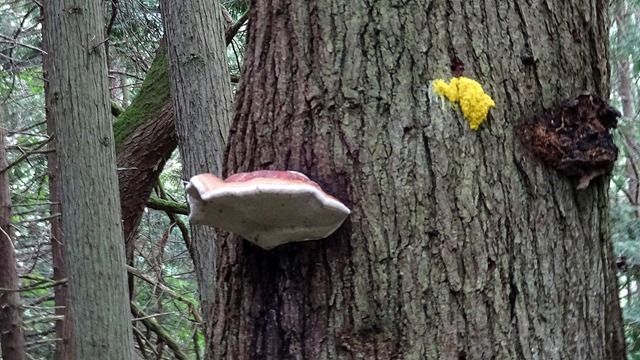 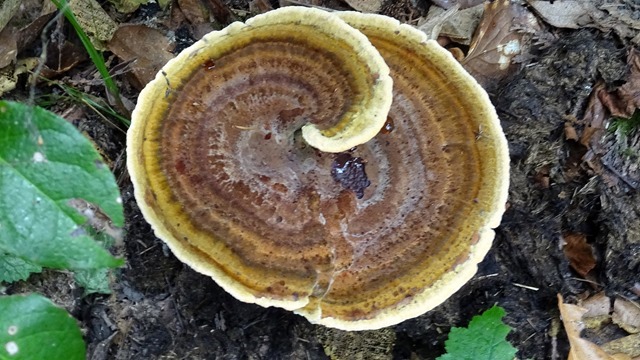 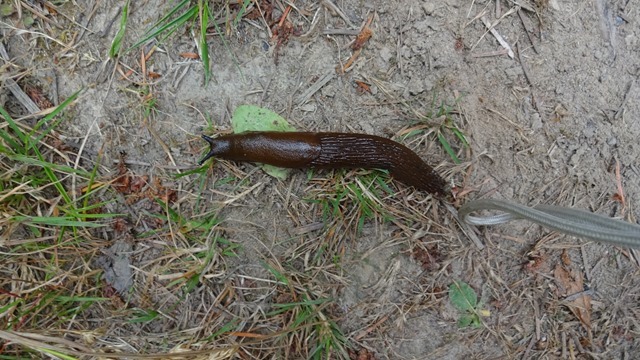 We heard that there was a sacred native American rock somewhere in the vicinity but didn’t know exactly where it was. We finally ran into two women who were heading there and told us to follow. The trail was steep and narrow and we would have never found it had we not asked them.

Tamanowas Rock. There is a steep path with a cable to get to the top but we decided against it. 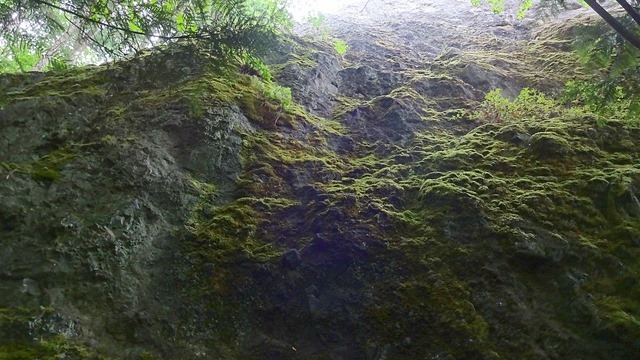 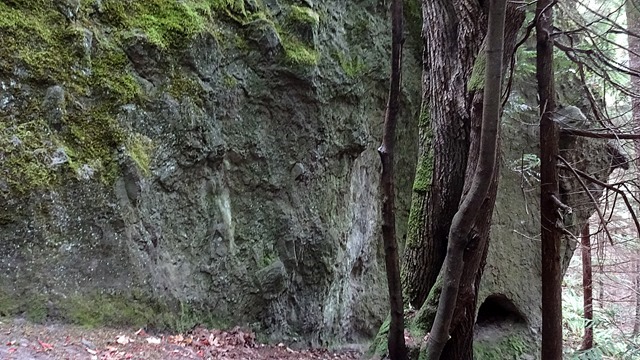 After getting our mail on Monday morning we found the Port Townsend pickleball courts and played a few games. Nice group of people, and Jim’s elbow felt much better after Art’s treatment last week. Then we walked around the port where they repair the boats. It was fascinating watching a ship being lifted out of the water. They had been hit by another ship in Alaska but were able to finish out the fishing season and make it back to Port Townsend for repairs.

We couldn’t imagine how they get it in this lift but got to see it firsthand. 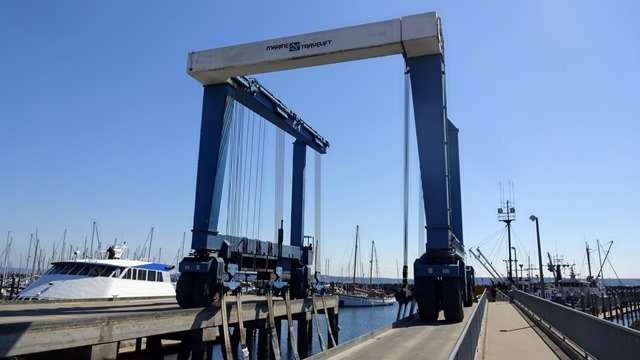 This is a wooden boat but they reinforced the bow with steel so it didn’t sustain too much damage. We were told that it got pushed 300’ when it was hit but don’t know what happened to the other ship. Apparently nobody was injured. 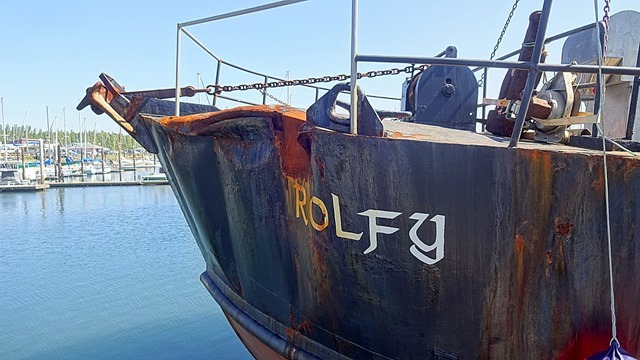 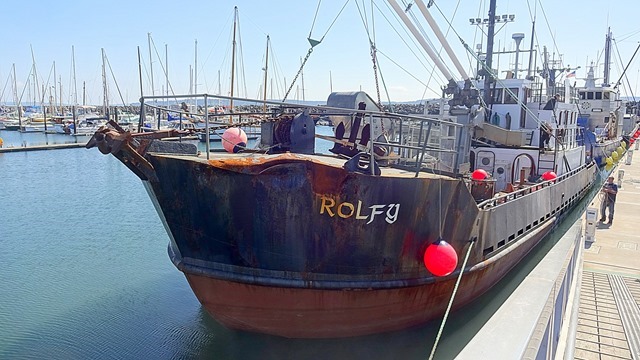 These two workers used long poles to get it centered while the driver was slowly moving it forward. 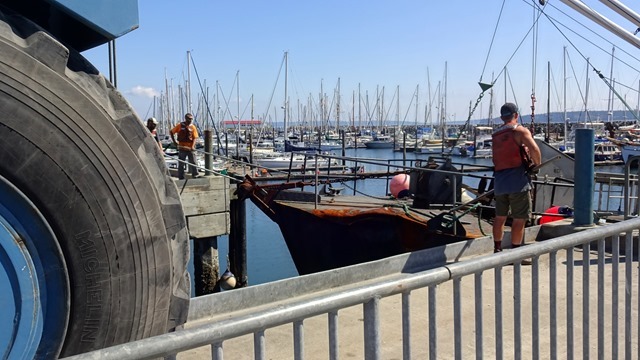 They finally started lifting it but had some problems with the placement of the straps and had to lower it back into the water. We got tired of waiting so didn’t get to see it completely out of the water. 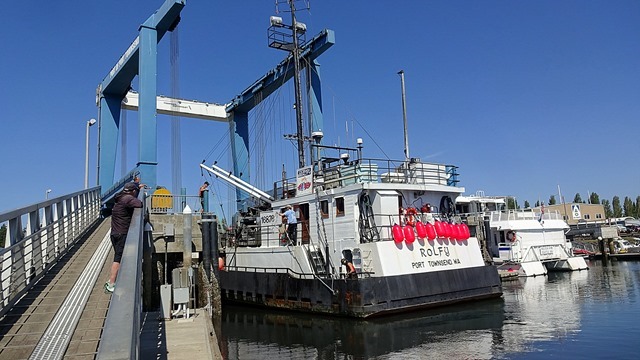 We had to go back to Port Townsend Brewing a couple more times before we left. One night there was a different blues band playing and we enjoyed some people watching, especially this guy that Jim called “Fire Man”, for the flames on his outfit. He was quite a dancer, and could amazingly kick a leg up over his head. 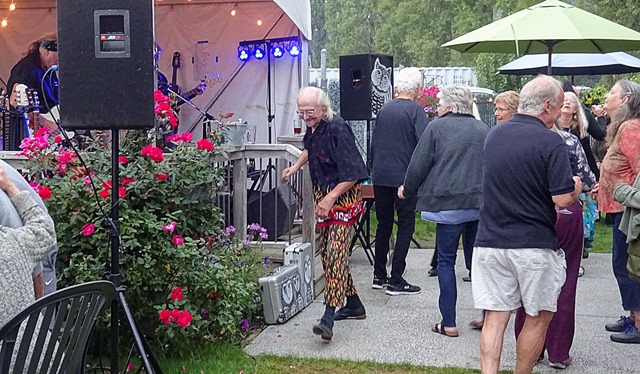 On Tuesday we boarded the ferry from Port Townsend to Coupeville on Whidbey Island. It was uneventful. We didn’t hook up the car since it cost less driving on separately due to the length. We paid $71.20 for both. In 2014 it cost $68. 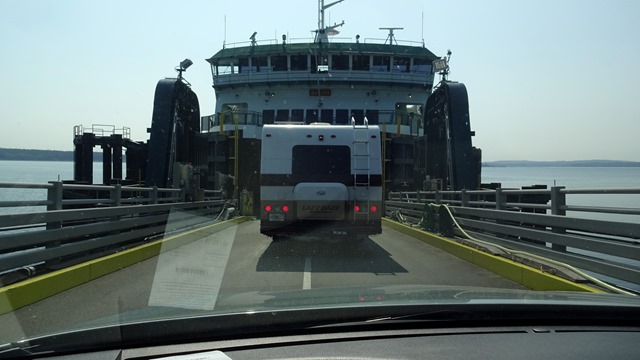 There is no wasted space. He got a front row seat. 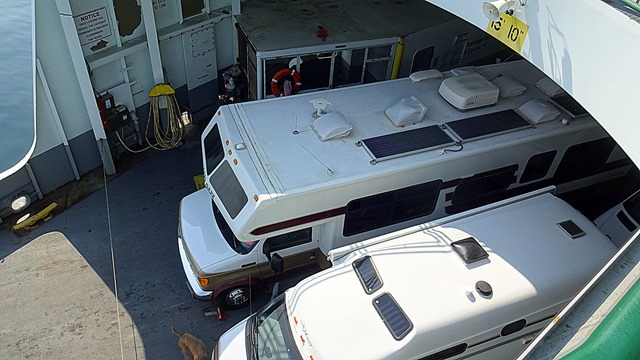 Last look at Port Townsend from the ferry. 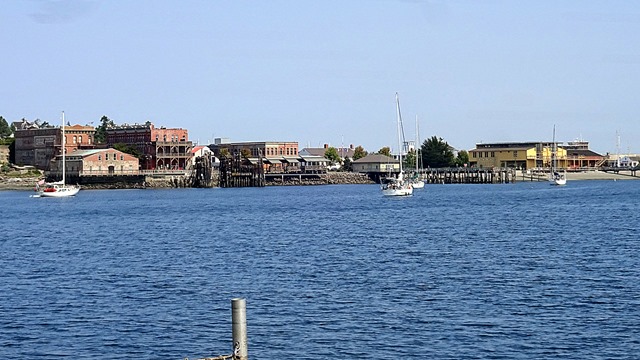 In Anacortes we parked at Cap Sante Marina where we stayed in 2014. It’s just a gravel lot with no hookups but they have improved the RV parking area and angled the sites so we had a great view. 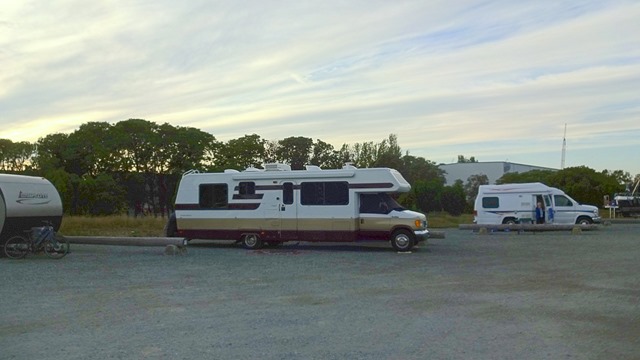 Our view of the marina. 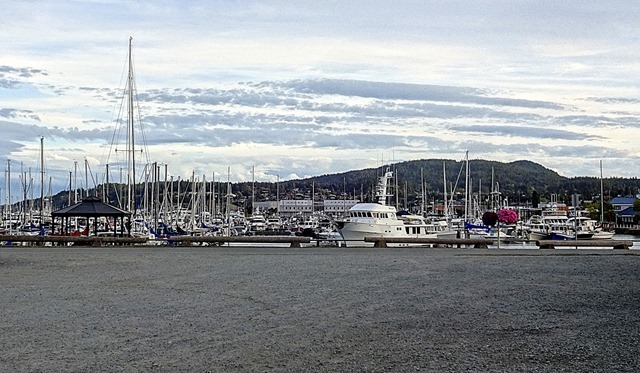 View of the RV sites from across the water. 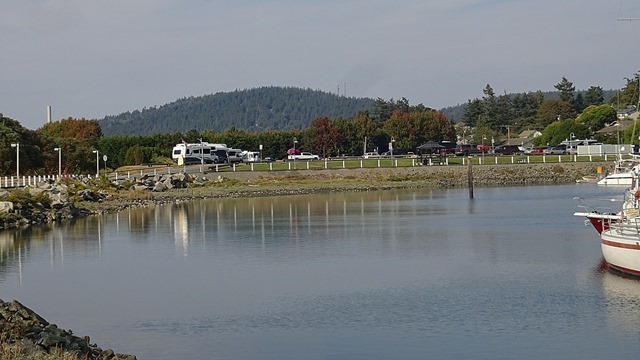 It’s a great location being right at the marina and just a short walk to downtown Anacortes. Jim thought we might want to trade the Lazy Daze for this yacht that’s for sale. 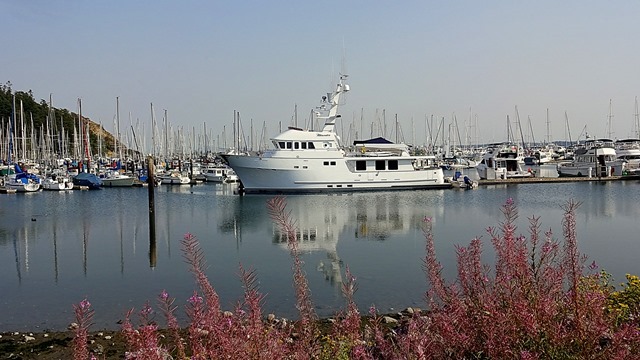 I had to stop by and see the cats at the adoption center just a few blocks from the marina. They live in a house with a large screened-in yard. 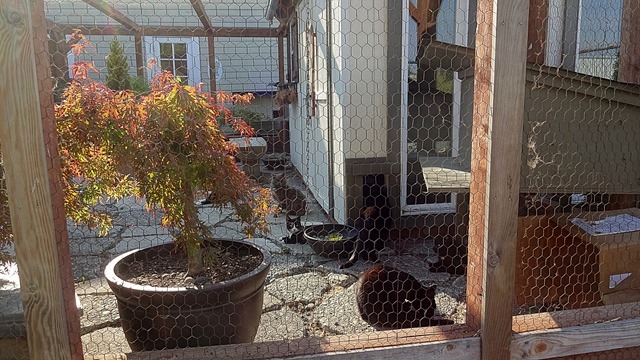 We found another ship being moved. 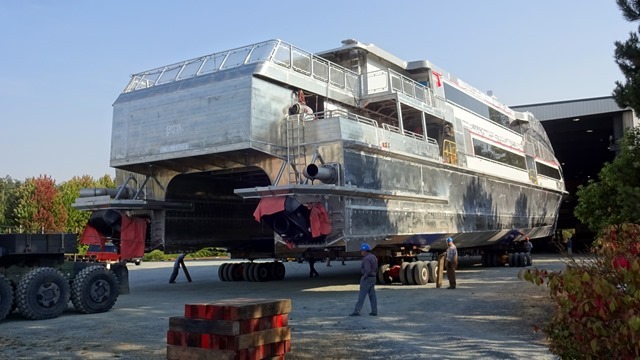 And took a walk up to the Cap Sante overlook. 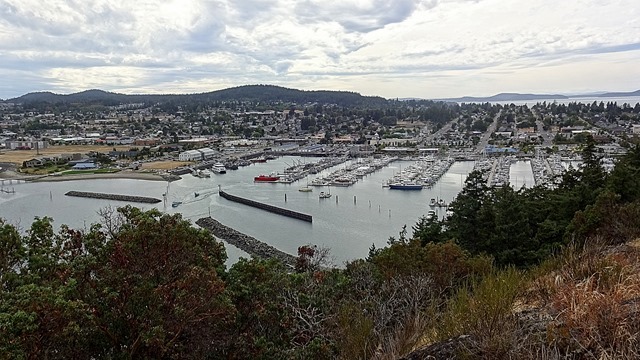 Some of the locals. We saw them in many yards in both Port Townsend and Anacortes. Not that we don’t enjoy seeing deer, but I’m hoping the wildlife viewing improves in Jasper and Banff. 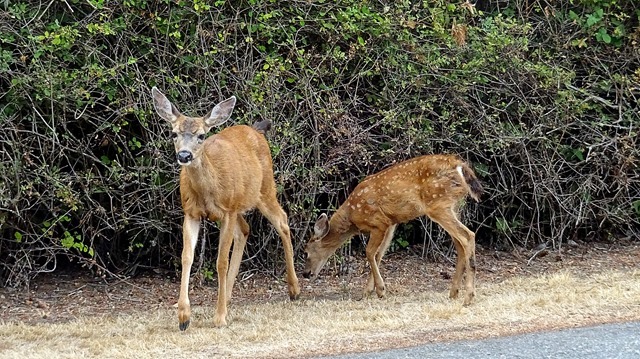 We passed some very nice homes near the water. 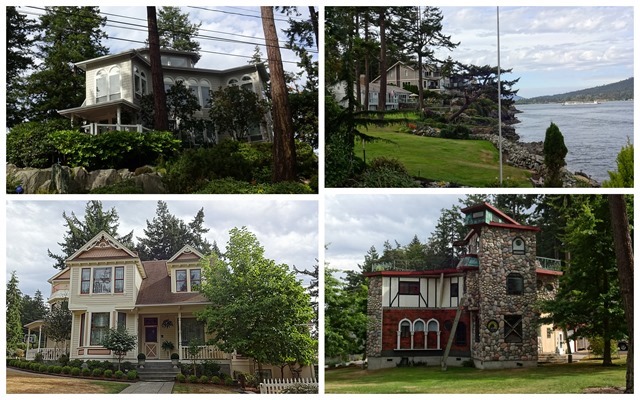 We really like Anacortes and would have spent more time there had we not decided to go to Canada. 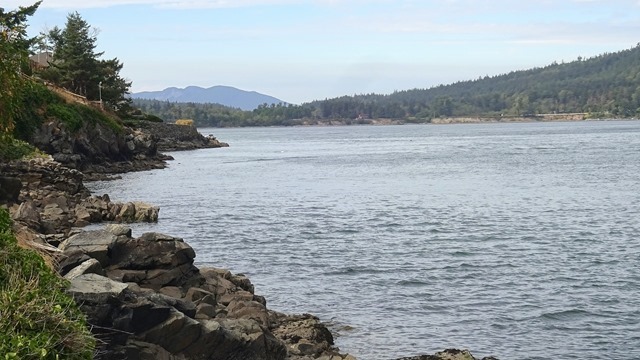 Next up, crossing the border.