Arrived here three days ago. Hueco Tanks is an unusual rock formation that seems to appear out of nowhere and does not resemble the landscape in this area near El Paso, TX.

It is famous for two things, ancient pictographs and bouldering, a form of rock climbing. This will be the second time that we have taken a tour of pictographs and I believe I have seen enough. To me the rock formations are far more interesting and scenic. Our three hour tour of the pictographs turned into a four hour tour. 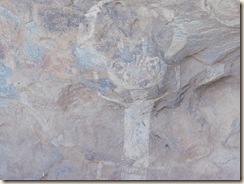 Since this is a historical site you can’t just hike the trails. Oh no, we had to be at the ranger station at 8am to try and get two of the remaining 10 passes to hike the rocks. They issue 70 per day, reserve 60 and leave 10 first come, first serve. Even though we camped amongst the rocks we could not hike the adjacent trails. It is understandable when you see the graffiti that previous idiots left on and around the pictographs. You know what I mean, “Tina loves Waldo” and that kind of crap.

It is a beautiful place and well worth a visit. They allegedly limit you to a three night stay. Initially, we had two nights but have stayed over today because of a high wind advisory. We were to have winds gusting to 65 mph today with dust storms and I can confirm we had high winds and dust. The winds are out of the west and southwest. The campground is on the east side of the rocks so we opted to stay rather than go on to New Mexico.

Went into east El Paso today to do some shopping. I don’t know what it is but the longer we are camping and near small towns the less I like cities. Of course, what we saw of El Paso was not attractive. We overheard a woman at another campground comment earlier that El Paso was ugly. In the news, Mexicans are coming over here to shop at our malls due to the violence in adjacent Ciudad Juarez.