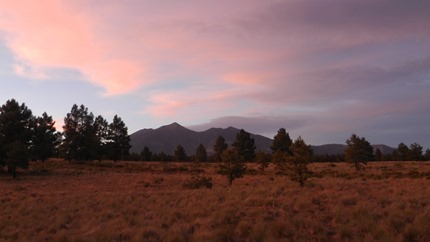 Flagstaff and much of the west have been experiencing record heat for the past several days. In fact, it was 96 degrees here on Friday, just one degree below the highest temperature ever recorded. But it is true what they say about dry heat. It may be hot, but it’s nothing like the sauna feeling we used to get in Florida, and in the shade with a breeze it’s actually comfortable. And monsoon season has begun. We had a few drops of rain and thunder the past couple days, but this morning it rained enough to wash off some of the dirt and cool things down.

On Thursday after our morning walk with the Rubber Tramp group, Debbie and I went to town to do laundry while Jim stayed home to install the new 12 volt outlet he bought last week.

Gathering together for one of the morning walks. 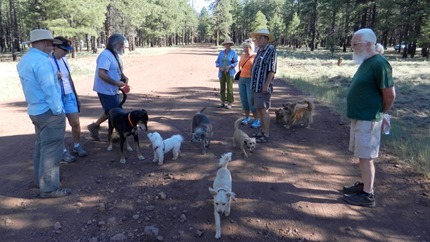 Some days there were more dogs than people. And they all got along. 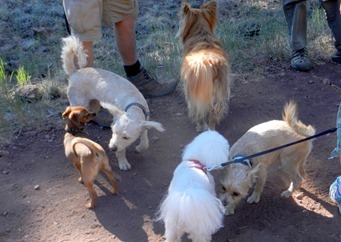 It took Jim most of the day to install the outlet, and when he finally got it hooked up and tried plugging something in, he blew a couple fuses. He’ll probably remember to test the polarity the next time! To make matters worse, it was really hot that day, so he decided to turn on the generator so he could run the AC. The generator started and ran, but when the compressor kicked on it shut the generator down. He was not a very happy camper when I got home. But at least the new outlet is now working fine.

He tried starting the generator again but this time nothing.  We checked the Onan manual, did some research online, and he called our more mechanically inclined Lazy Daze friend John. We were not aware there is a circuit breaker on the generator, since it’s hidden, but Jim got his hand in there and sure enough the circuit had tripped. This time the generator started, we ran the microwave first, then the hair dryer, then the air conditioner. It ran fine for about 15 minutes and didn’t cut off.

In the meantime Jim called an Onan authorized repair shop in Flagstaff and made an appointment to bring the Lazy Daze in on Monday morning. He figured if it continued to work  okay we would call and cancel in the morning, but we just tried running it again and when the air cut on the generator cut off. So we’ll just take it in tomorrow and see what they say. It could be a generator problem or something wrong with the AC. Either way, I’m sure it won’t be a cheap repair. We would have needed to go dump and get water in a day or two anyway, so we can do all that after the repair shop while we’re in town.

Bob and quite a few of the Rubber Tramp Rendezvous people left today, as their 14 day stay limit was up. I must say we were pleasantly surprised at how much we enjoyed this group, since we weren’t sure what to expect. As it turned out, we met some of the nicest people whom we hope to see again somewhere down the road. It was a relaxed atmosphere where you could join in if you wanted, but there was no pressure. We walked almost every morning and evening with the group, which was a great way to get to talk with different people and watch the dogs frolic.

Information exchange was also a big reason many people came. Some of the guys helped others work on their RVs or vans, installing brakes, solar systems, and troubleshooting problems. Several mornings Bob, Laurie, or Randy led talks on different subjects, such as fear, alternative cooking methods, and even a show and tell where everyone brought their favorite gadgets. There was a little of everything, from MiFi and GPS devices to fast drying underwear. Randy even showed us his tongue cleaner! Bob treated us all to Little Ceasars Pizza one night, courtesy of his mom, and there were two other group dinners. Last night after the soup dinner we were chatting with Jason, a very personable 38 year old from Austin who is on an eight week leave of absence from his job as an arborist. He has a nice van and wants to quit work and travel but is trying to figure out a way to make it happen while doing some kind of work on the road. He asked us if he could do a recorded interview with us to show his girlfriend back home, and promised it wouldn’t show up on YouTube! He asked  questions about how we came to the decision to become full time RVers and general questions about the things and places we liked best and what advice we would give others thinking about an alternative lifestyle. He was lots of fun to talk to. We wish him luck and hope he can figure out a way to live his dream. 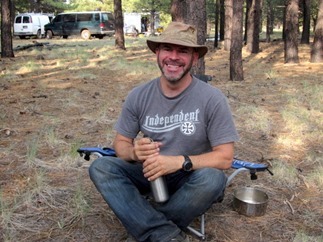 I’ve been remiss about posting cat pictures but I haven’t taken any good shots of them recently. These cats just love being in the forest where it’s quiet and they are getting really good about walking with their harness and leash. The bad thing is they are covered in dirt when they come back in. They spend most of their time outdoors chasing grasshoppers. 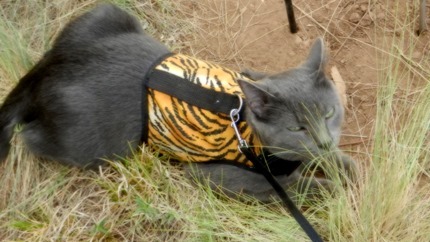 Sister Sophie. At eight months old our babies are all grown up! 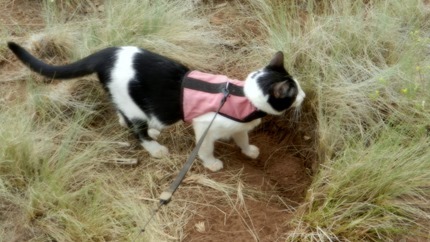