Bright and early Wednesday morning we drove the 100 miles to Scottsdale for Jim’s doctors appointments. Other than a slightly low platelet count, so far all of his blood tests have been normal. They did draw more blood for a few other tests so we are awaiting those results.

He also saw the ophthalmologist, who said that his eyes looked much better. Although nothing grew on the cultures it was apparently some type of bacterial infection that responded to the antibiotics. He prescribed some topical steroid drops to try and get rid of the remaining inflammation, and wanted to see how he’s doing in a few weeks. So I guess we’ll be making another trip to Scottsdale. He’s just happy that his eyes are feeling better and he is not having the fluctuations in vision he’s been experiencing for a good while.

It was way too hot in the Prescott area, and the nearby Doce fire was still raging, so yesterday we headed north to Flagstaff and higher elevations. We saw that the Rubber Tramp Rendezvous was taking place in the Coconino National Forest, about 8 miles west of Flagstaff, so we decided to stop and check it out. It was very shady where most of the group was camped, so we went on down the road a quarter mile or so and found a great spot to park by a meadow with a view of the San Francisco Peaks, with Humphreys Peak being Arizona’s highest point at 12,637’.

We’ve never been to Flagstaff because it was always too cold when we drove through. This is a picture taken as we passed by in April, 2010. 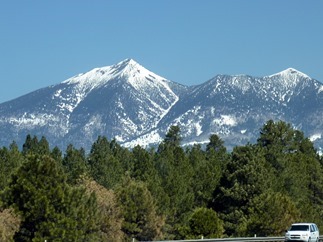 Last evening we met Bob Wells, author of Cheap RV Living blog. He’s an interesting guy, and we’ve enjoyed talking with him and taking a couple walks with him and some of the other people here. He puts on a big Rubber Tramp Rendezvous in Quartzsite every January, and a smaller, more informal, summer gathering. He is a big advocate of free camping on public lands, and likes to help others learn to do the same.

This morning we all took a hike to a nearby pond hoping to see some elk. I think there were too many dogs and we were all talking, so we didn’t see any wildlife. Nice scenery, though. 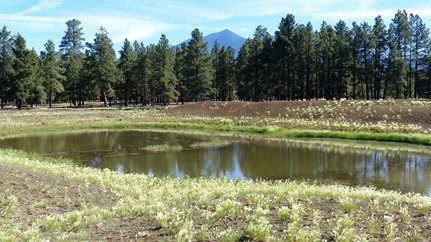 Some of the group and their pups. 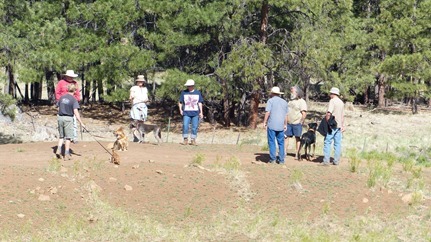 Bob’s sweet dog Homer, just before he raced off into the water. 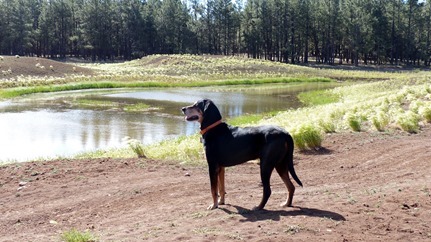 We are really looking forward to exploring Flagstaff. We enjoyed Prescott, with all the hiking, proximity to the National Forest, and a Trader Joe’s. It was also one of the neatest and cleanest cities we’ve visited. One evening we even went downtown to the Courthouse Square for a free jazz concert. We’ll see what Flagstaff has to offer. 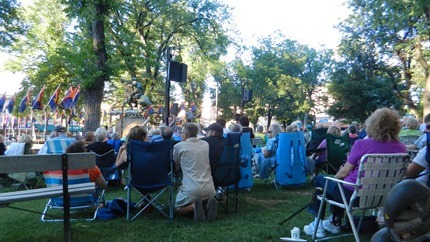 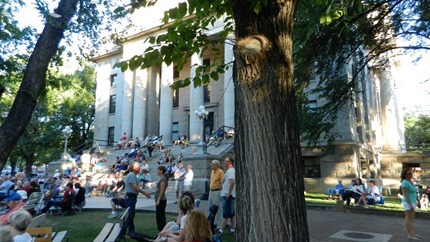