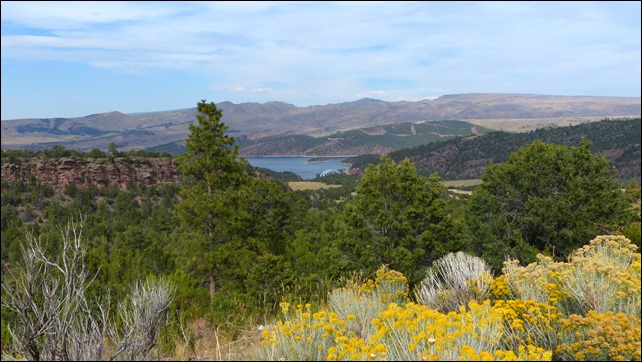 On Monday we drove 250 miles from Grand Teton National Park to Flaming Gorge National Recreation Area near Dutch John, Utah. We don’t normally drive that far in a day, but there just really isn’t any place to stop in between, although it’s a lovely drive. Many of the forest service campgrounds are closed for the season, so the closest one open that we came to was Dripping Spring, just a few miles from the Flaming Gorge Dam. Due to a fire here many years ago, our first impression was that we’d spend the night and find something better the next day. As it turns out, we spent four nights. It kind of grew on us, and there have only been a few other RVs here so it’s been very quiet.

The entrance wasn’t too appealing with all the dead trees still standing. 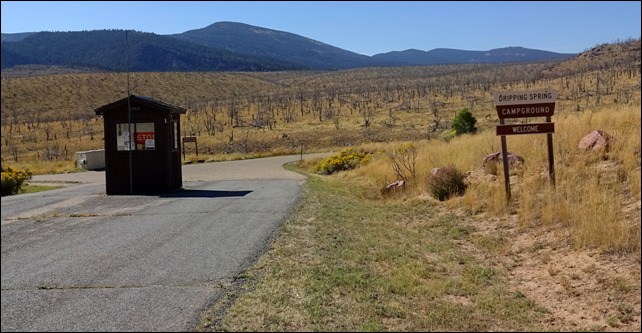 But we liked our site with the surrounding rabbit brush in bloom. 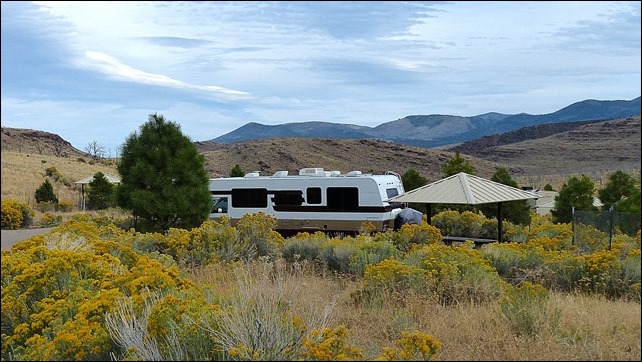 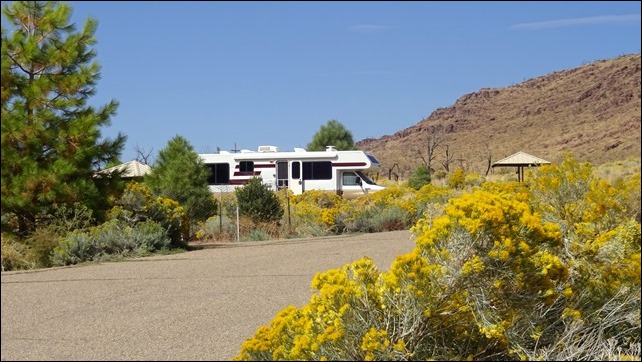 We are still fighting colds, but on Tuesday we drove down to the dam and Red Canyon see if we felt up for a short hike. Unfortunately there was a controlled burn going on near the canyon so the air was hazy and the views not so great, but it was nice being back in red rock country. 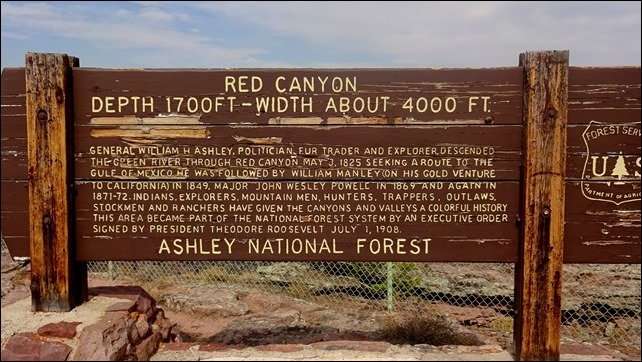 We walked the rim trail for a mile, which was about the extent of our energy levels. 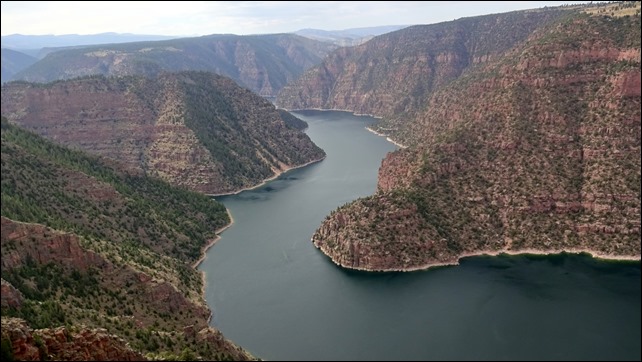 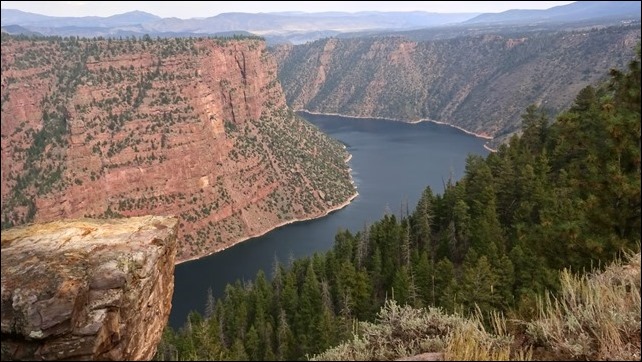 Flaming Gorge Dam. Here’s a bit of history from the Forest Service website:

Flaming Gorge Reservoir was created in 1962 with the completion of the Flaming Gorge Dam on the Green River by the Bureau of Reclamation. At 502 feet tall, the dam is part of the Colorado River Storage Project, and provides water storage,
hydroelectricity, and recreation. There are three generating
units in the Flaming Gorge Power Plant, which produce enough
energy annually to serve about 50,000 households. 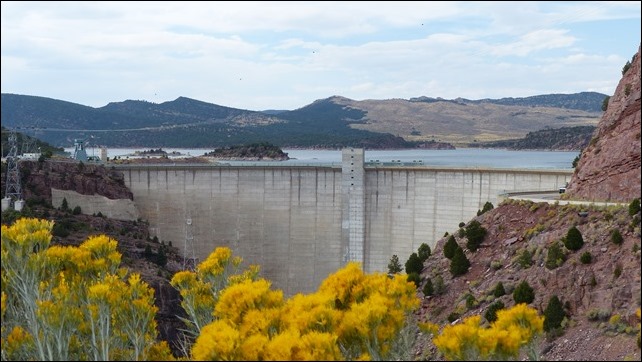 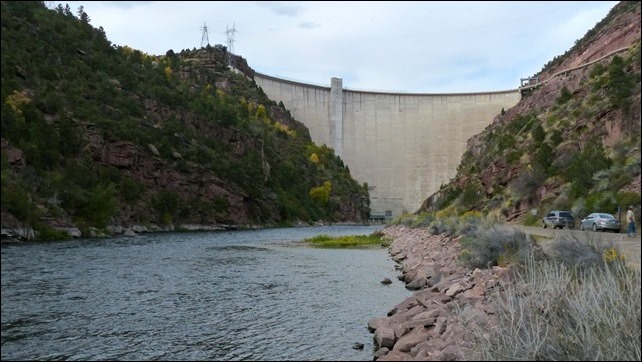 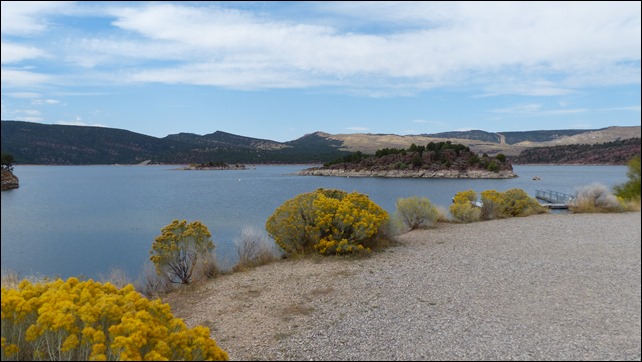 We were feeling better on Tuesday so decided to go for a hike on the Little Hole Trail. We were here in 2010 at a different campground and hiked several miles of the trail right along the Green River across from the dam, but this time we were closer to the other end of the trail, just a couple miles past the campground at the Little Hole boat launch area, so we started there. Apparently although we started at the trailhead sign, we didn’t realize the trail continued past the boat launch so we actually hiked away from the dam and missed the trail right along the river.

Looking back through the dead trees to our starting point by the boat launch. 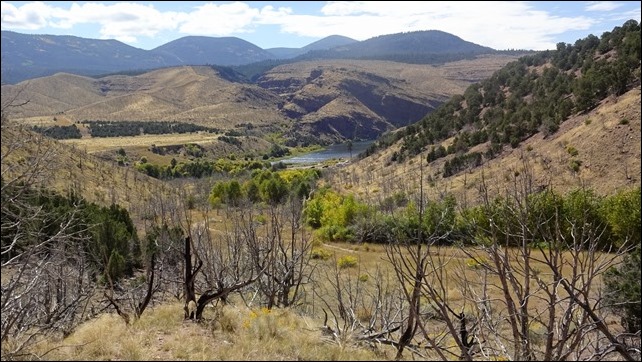 Although most of our hike was not by the river we still enjoyed the scenery. 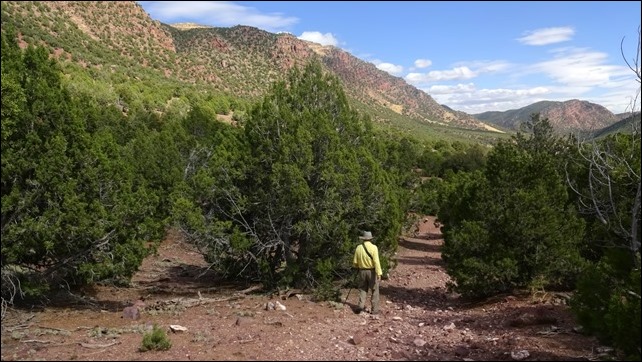 When we saw this we decided to keep going. 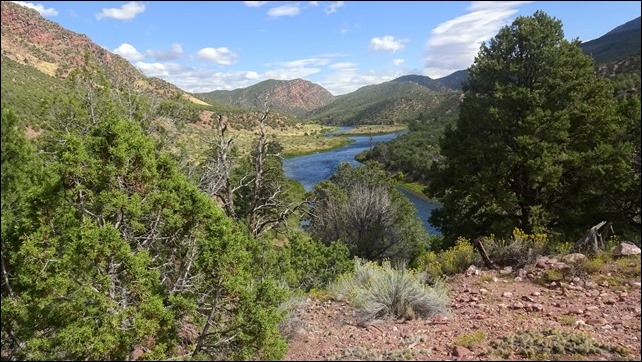 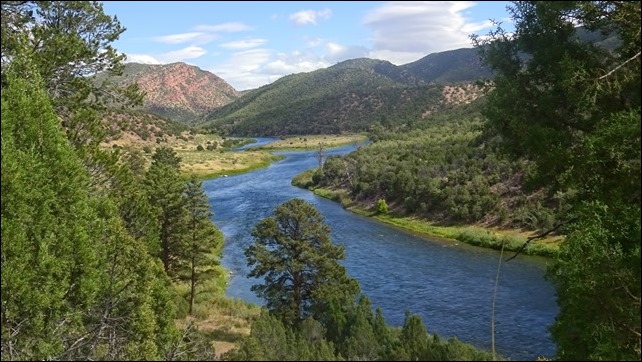 One of several river campsites we passed. 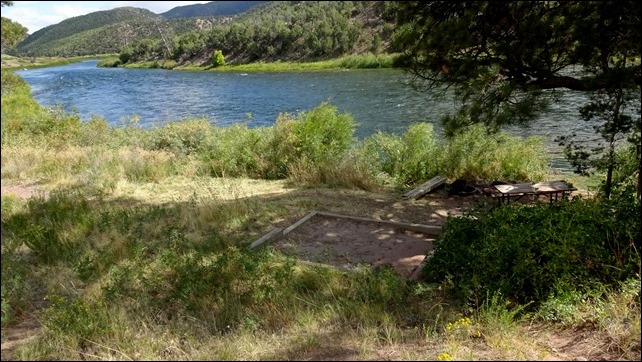 It was so peaceful. Wish we could have gotten out on the water. 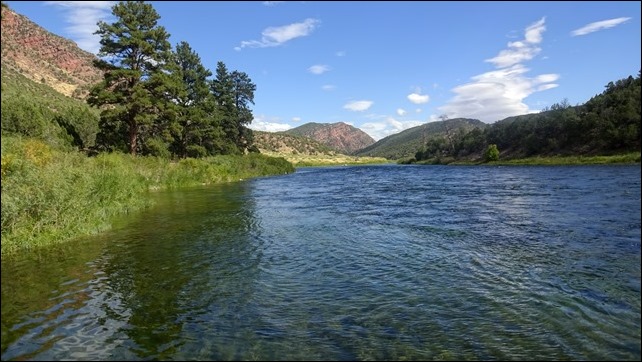 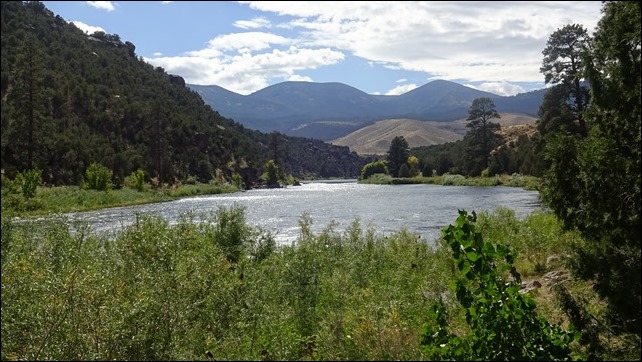 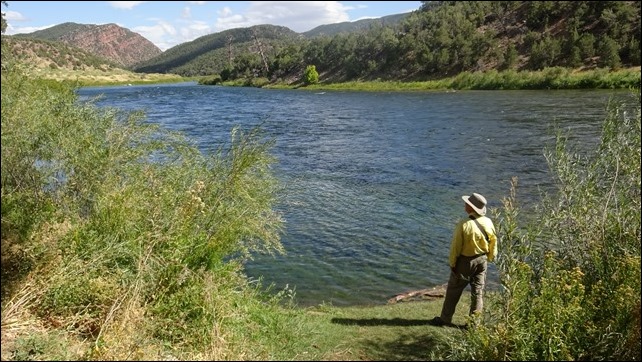 We only saw this one boat of fly fishermen. 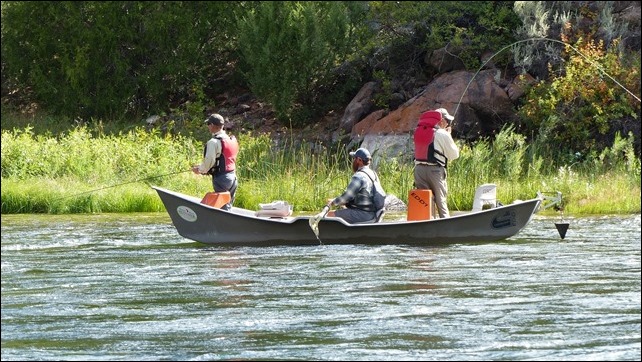 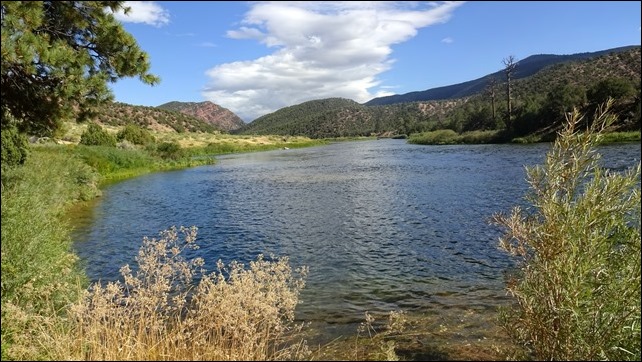 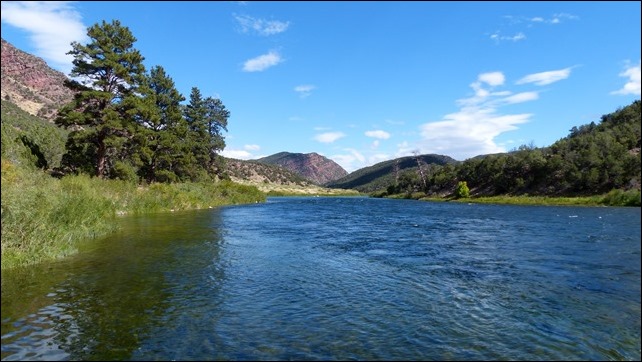 It rained all day and night yesterday but luckily the predicted heavy winds and severe thunderstorms missed us. I did a little cooking and cleaning, while Jim did some sorting and scanning of papers that somehow continuously pile up. Today we’re moving on to Dinosaur National Monument.

Parting shots of our ever-changing view. 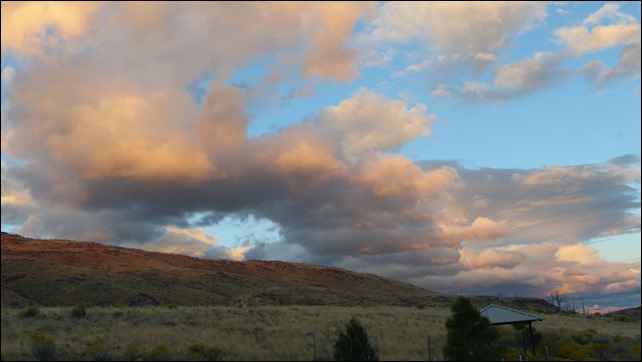 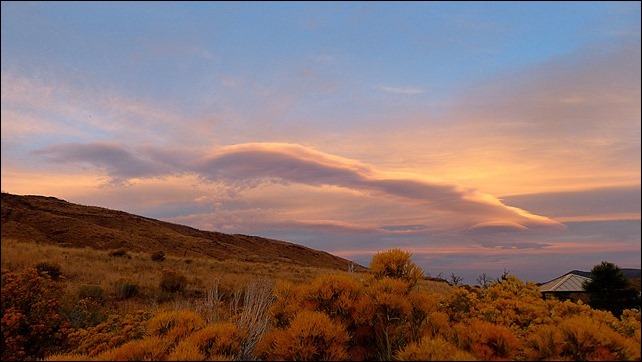 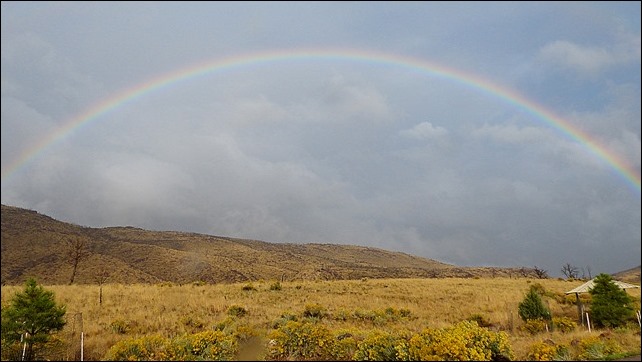