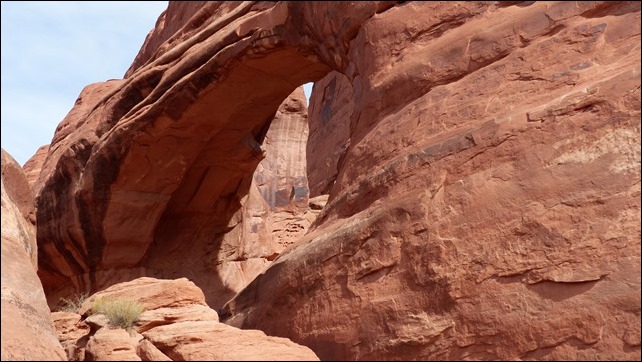 Being parked near the back door to Arches National Park, Mark and Bobbie wanted to take us to see a couple of arches we had not been to before. They called it their secret trail, and talked about how they’ve never seen anyone else out there. Of course they haven’t been there on a Saturday of a holiday weekend, either. To get to the trailhead, Mark drove their Subaru down a Jeep road off Klondike Bluffs Rd that we wouldn’t have driven ours on, but made it just fine. There really isn’t a trail from where we started, but we just had to walk over slickrock mounds working our way towards the fins. 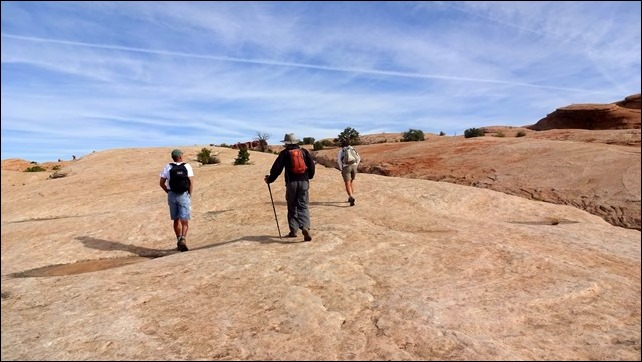 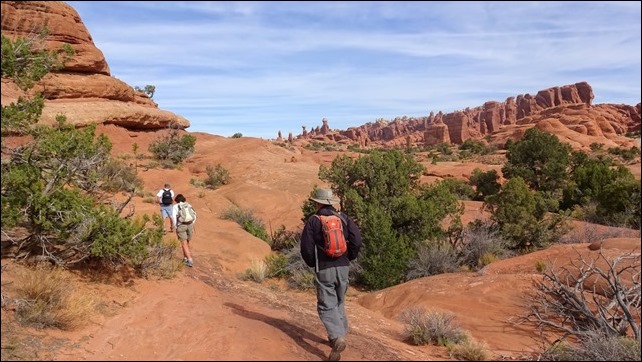 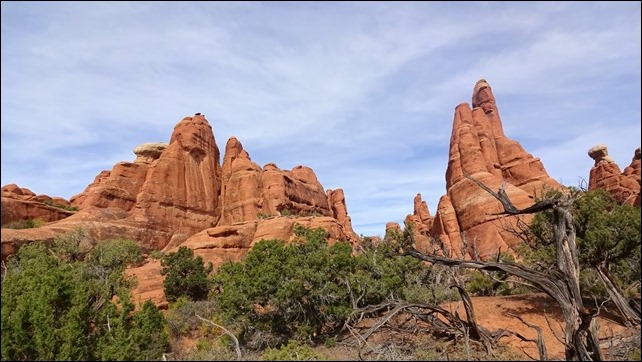 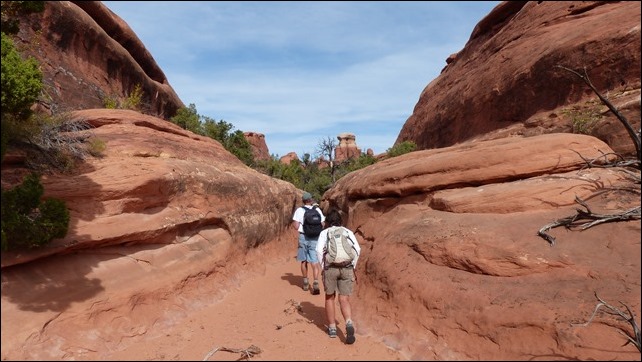 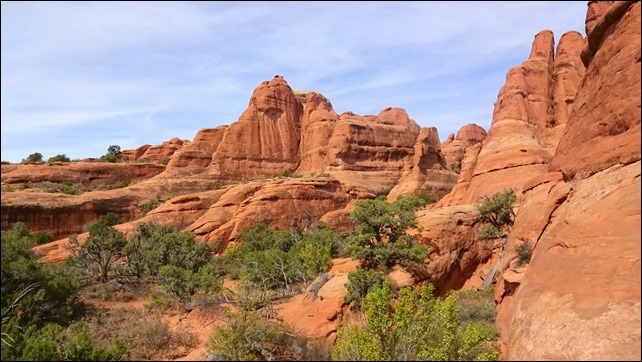 As we neared Tower arch we heard voices behind us and stopped to let them go by. Turns out it was a group of 18 senior citizens like us, and they proceeded to sit down under the arch and eat their lunch. Not good for those of us who were trying for photos without people in them, but as Jim said they do give it perspective for how huge the arch really is. 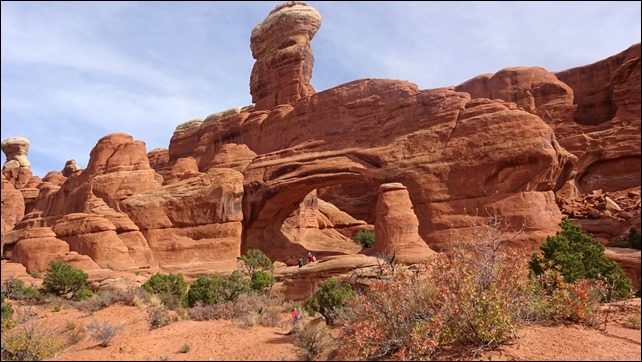 So we detoured over to nearby Anniversary arch to try and wait them out. It was hard to get a good photo of it. 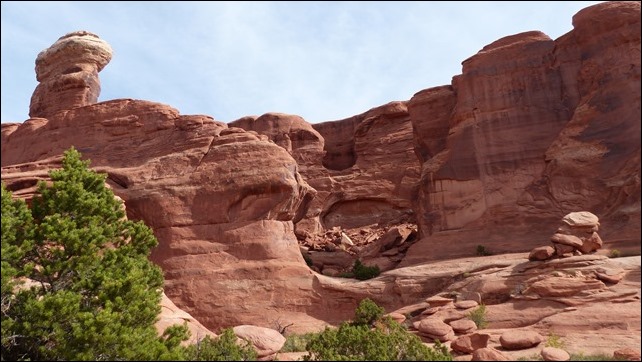 So I got underneath. A fitting place to visit on the day before our 34th wedding anniversary. Also October 6th was our 8th anniversary of being fulltime RVers. Time really does fly when you’re having fun. 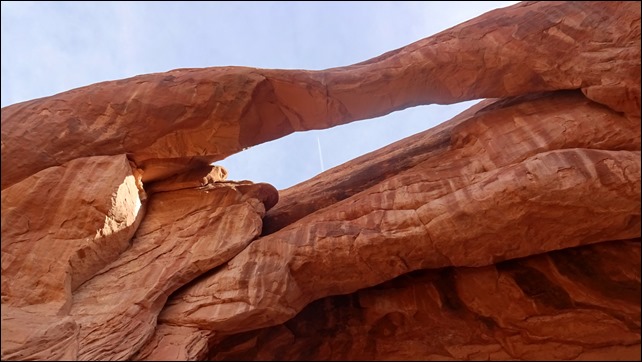 The lunch eaters were still under Tower arch, so we just walked around them and took our photos. Then a group of about 10 teenage boys showed up. Not such a secret hike. 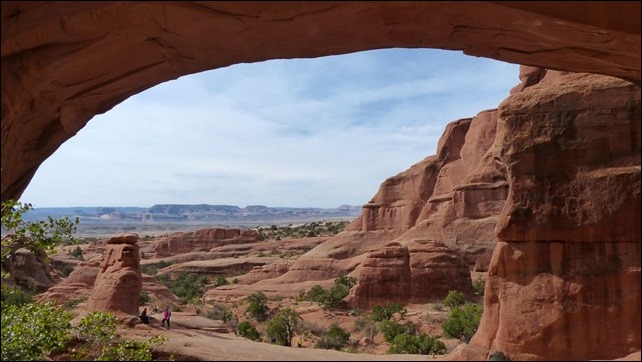 Everyone finally left when we were a good distance away. 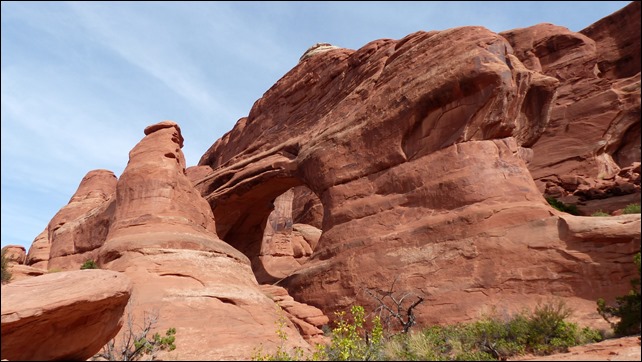 The rest of the hike took us through sand dunes, mini slot canyons, more interesting rock formations, and no other people. 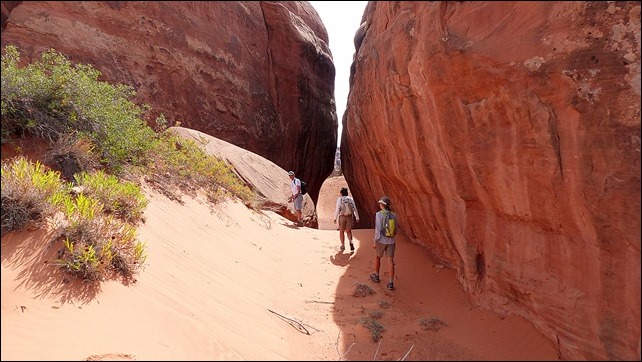 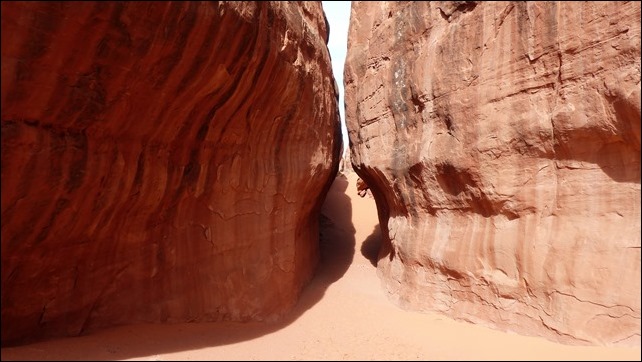 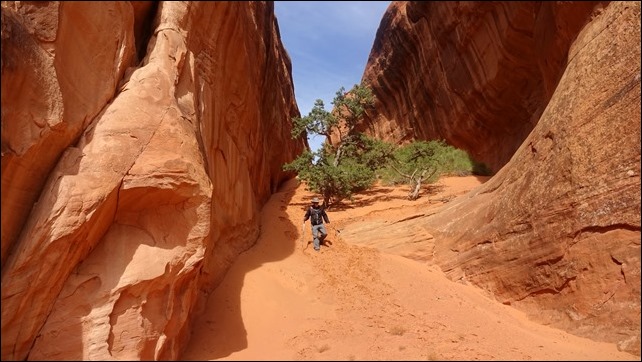 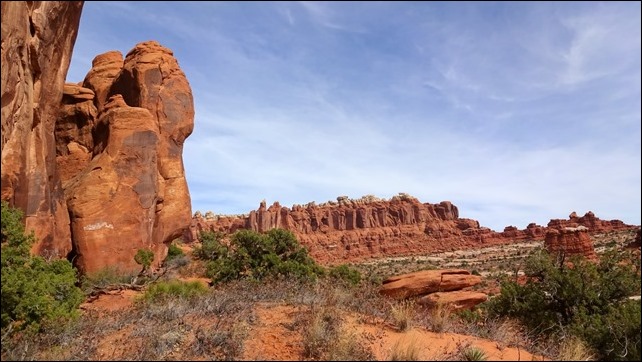 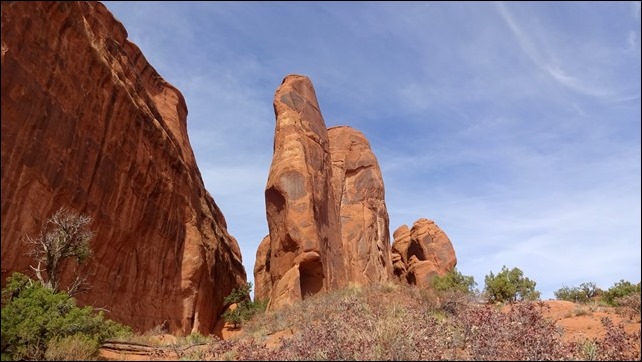 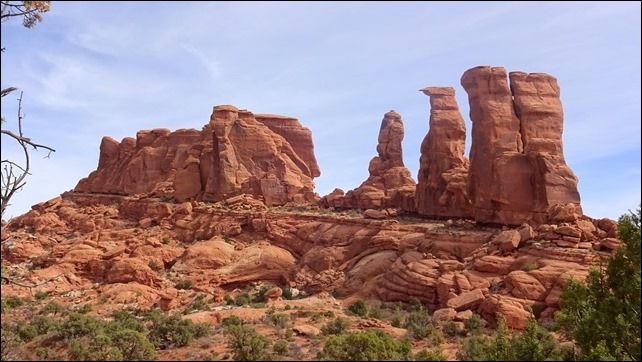 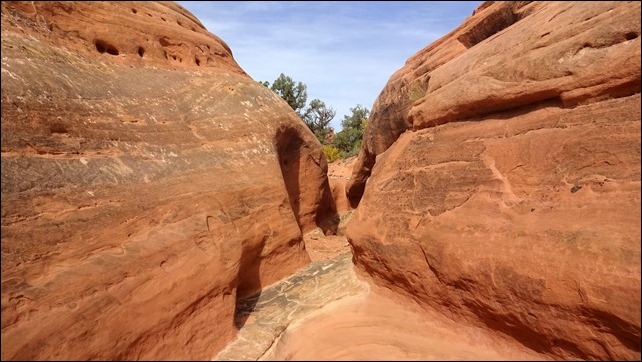 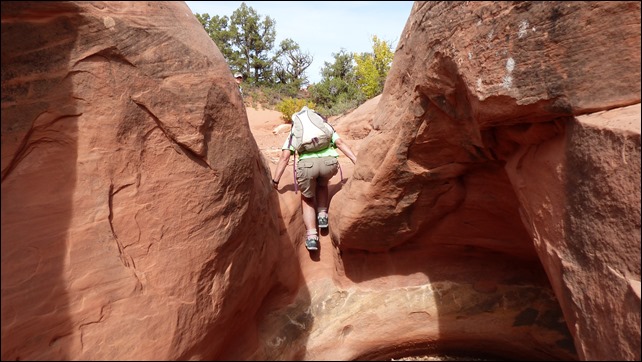 It was a good day. Mark and Bobbie must have still been recovering from his son Caleb’s wedding since we only hiked four miles. We joke that Bobbie won’t even put her hiking shoes on if she isn’t going to walk at least 6 miles. 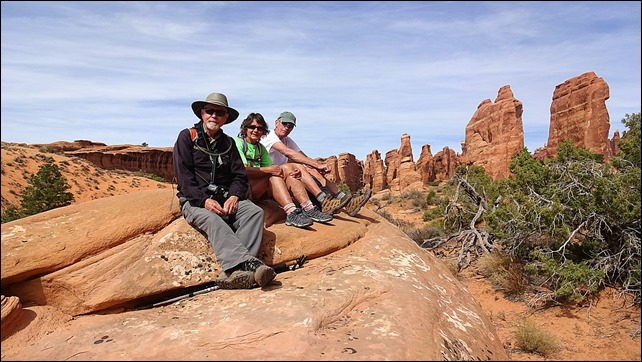 Yesterday, on our anniversary, we rode our bikes a mile and a half down the road to the Klondike bike trails. We took one of the easier trails out, since we haven’t ridden single track in awhile, and we were having a great time for a few miles until Jim got tangled up in some big rocks and went down. His neck was very painful from the fall, but luckily he didn’t hit his head, and just had some scrapes on one leg. We told Mark and Bobbie to go on, and Jim was able to ride his bike back home. His neck pain was getting worse so I thought he needed to go to the ER to be sure nothing was broken. We picked the perfect time, as nobody else was there, he got seen within a couple minutes, and was then taken back for a CT scan. Fortunately there were no fractures, but they did find that he had a sinus infection, still lingering following his recent cold.

Although we usually go out to eat on our anniversary, this year we had just planned to have a quiet dinner at home. As we were about to leave the hospital Mark and Bobbie showed up, and kindly invited us out to eat if Jim felt up to it. Since we hadn’t eaten lunch and it was after 3:30, we took them up on the offer. The Valium they gave Jim at the ER made him feel a whole lot better. And it helped him sleep last night, in spite of a very stiff neck, bruised butt, and scraped up leg. It could have been a lot worse, so it didn’t turn out to be such a bad day after all. I think Jim is seriously considering giving up on mountain biking, since he seems to have to fall about once a year.

This morning Jim’s neck was feeling somewhat better, but he was told to take it easy for a few days, so I joined Mark and Bobbie for a hike on the Klondike trails to check out the dinosaur tracks.

Walking where the dinosaurs once roamed. 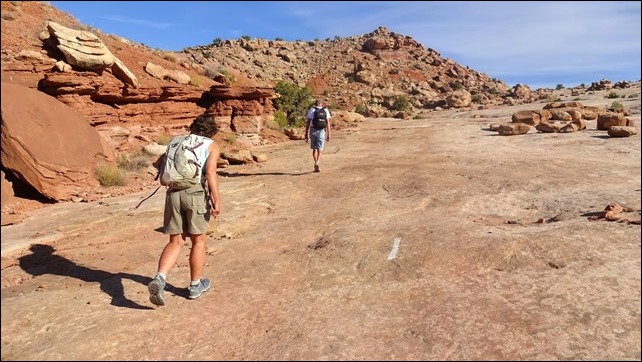 Although I’m skeptical, Bobbie assured me these were dinosaur footprints. I should have put my foot next to them for perspective. 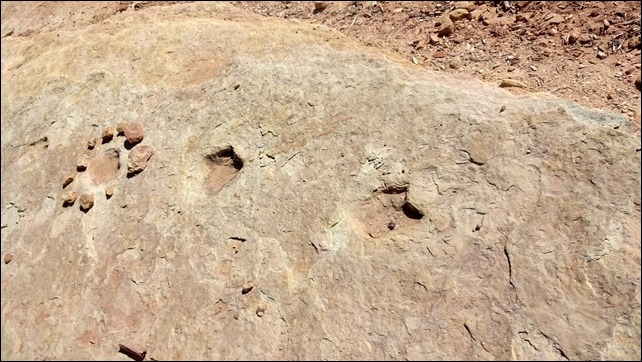 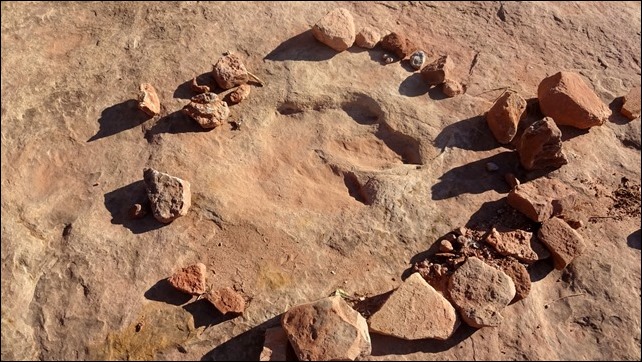 It was a lovely morning for a 7 plus mile hike, and we only saw three people on bikes when we were almost back to the car. 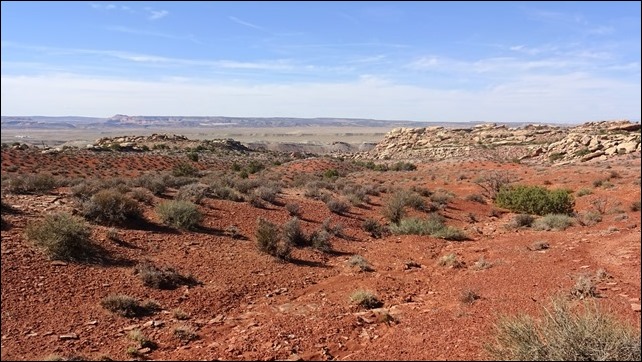 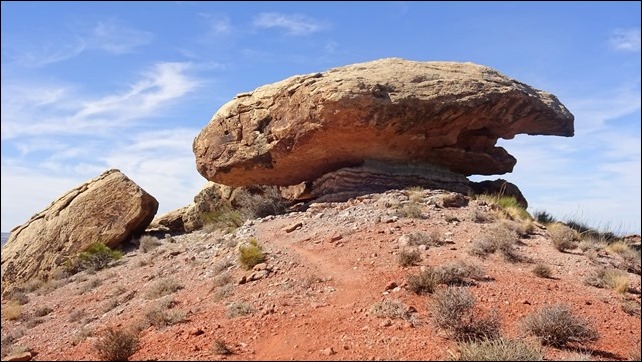 If Jim is feeling up to it, tomorrow we’re heading towards Virgin.