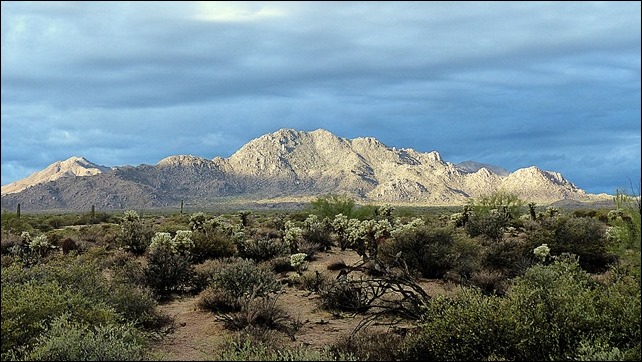 Since arriving back at McDowell Mountain Park we’ve been doing a lot of biking, a little hiking, some socializing, and spending time with cats. Turns out Alex and Ellen, whom we met this spring while boondocking south of Joshua Tree, and Kurt and Tony, whom we met in Ketchum, ID in August, are both here in the park. A nice surprise and we’ve enjoyed visiting with them.

Then Jim and Allison emailed last week that they were driving up from Tucson to spend a night in a hotel in Fountain Hills to come and bike the trails at McDowell. We did a couple of good rides with them, and hope to see them again in Tucson later this winter. I failed to take any photos.

Jim decided to join me at Fearless Kitty this year. One day we took care of cats in the big room I worked in last year. Then Saturday we helped out at the new building they are moving into next month, cleaning and rearranging, and removing old blinds from some of the windows. We also got to spend some time with a few of the cats that have already been moved over. There is still a lot of work to be done, but it is such a nice building, and almost twice as large as the old one, so it will be a good move, giving them space for even more cats and with much more visibility. The new location is right on Avenue of the Fountains, which will bring in more walk-in traffic, and hopefully result in more adoptions.

I made some nectar and put up the hummingbird feeder shortly after we got here. It was maybe three minutes before the first hummingbird arrived. 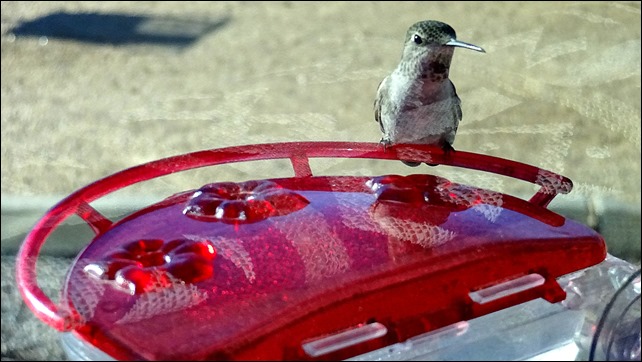 And not much longer before the Gila woodpeckers and flickers decided to visit. 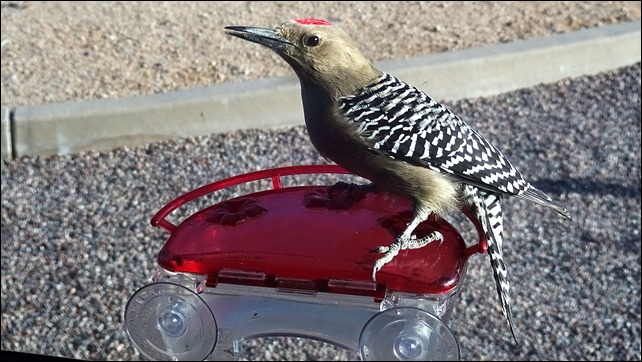 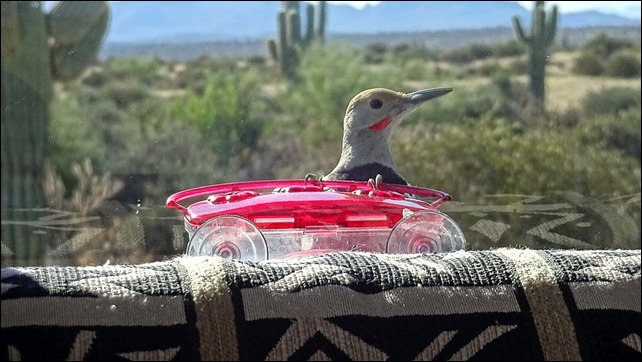 I set out a container of water to try and keep them from the feeder but they like the nectar better. We’ve seen quite a few other birds at the water dish, though. 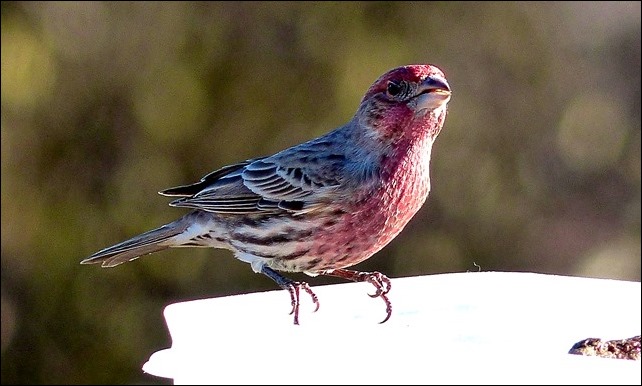 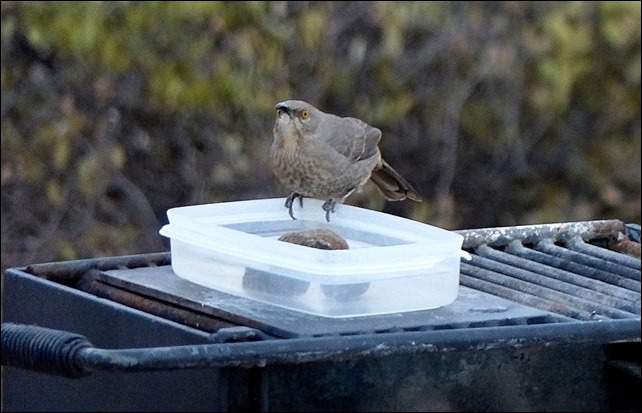 Jim and I went on a moonlight ranger-led astronomy hike on the Friday before the full moon. It would have been better a couple nights later, and our moon shots were out of focus, but it was still a beautiful evening for a hike, and we learned a few things. And had a view of the fountain. 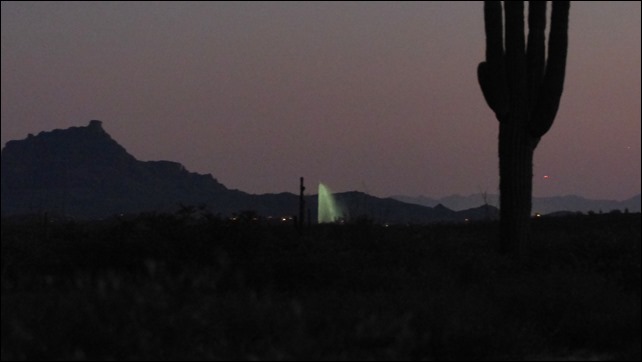 The bright lights are planes, not stars. Since we’re about 30 miles from Phoenix Sky Harbor, they really light up the night sky around here. 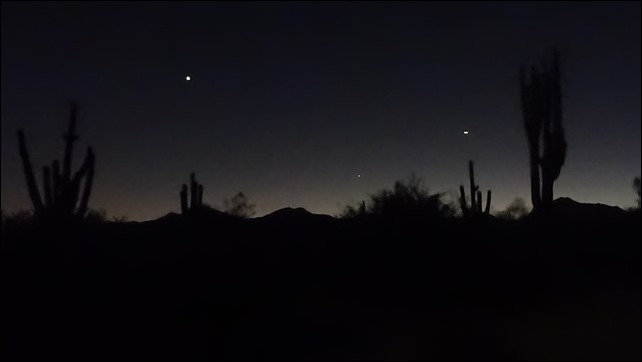 We didn’t know that you can find scorpions with a black light. This isn’t a great shot, but it was amazing to see how bright they look. There are several theories as to why they glow, and you can read about it here if interested. 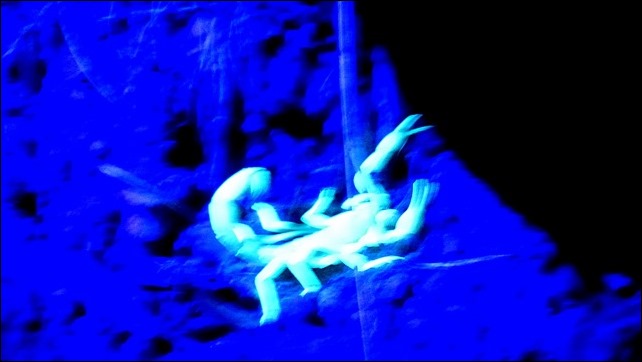 One day Ellen and I went to a Birding by Ear talk at the visitor center. Again, we learned a few things, but remembering them is the problem.

Our attempts at photographing the super moon. 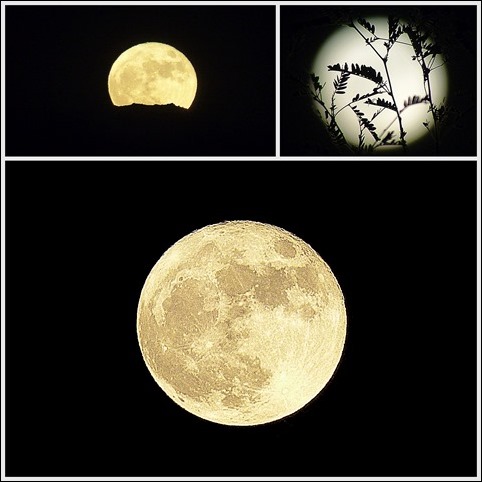 And a morning shot before it set. 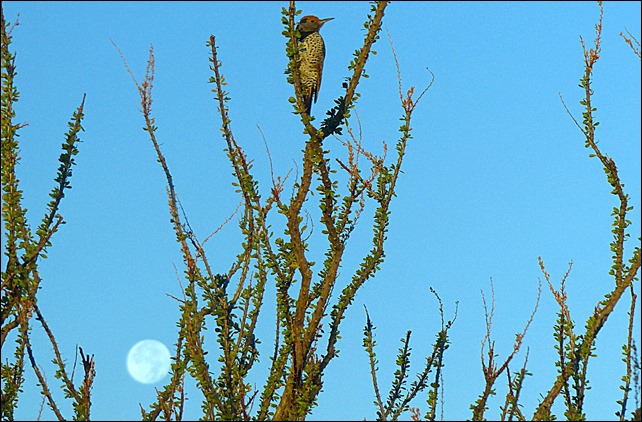 Many months ago we got a recall notice on the Subaru for the Takata airbag. Jim has tried repeatedly to find a dealer to do the replacement but the parts were not available. The Scottsdale dealer finally got the parts in, so we took it in the other day. We also had some other routine service done, so it took all day. Luckily they gave us a loaner, and we picked it up late Thursday afternoon. Because it was almost dark, and cooling off, we didn’t need to use the AC. On Friday we didn’t go anywhere in the car. Then Saturday morning on our way to Fearless Kitty I couldn’t get the air to blow out the upper vents. Somehow when they put the dash back together now the air comes out mostly at our feet, no matter where we put the setting. So this morning Jim is on his way back to the dealer to get that taken care of. 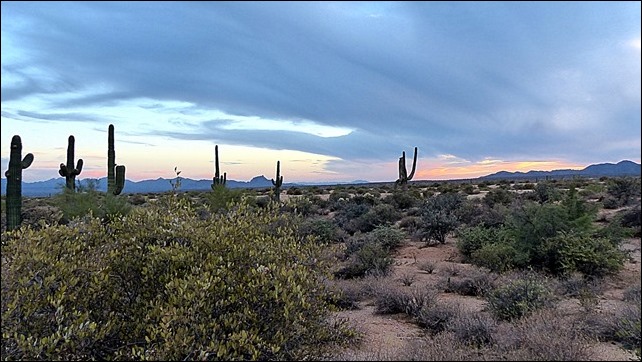 Kurt recommended we try McFate Brewing Co, a brewery with two locations in Scottsdale. Since one of them was just a few miles from the Subaru dealer, and sort of on our way home, we stopped for a pizza and some excellent beer, the best we’ve had in a long time. Pictured is a Candy Bar Milk Stout and a Candy Bar Coconut Bliss. We also shared a King Size, which is a 10% stout aged in whiskey barrels. Really good! 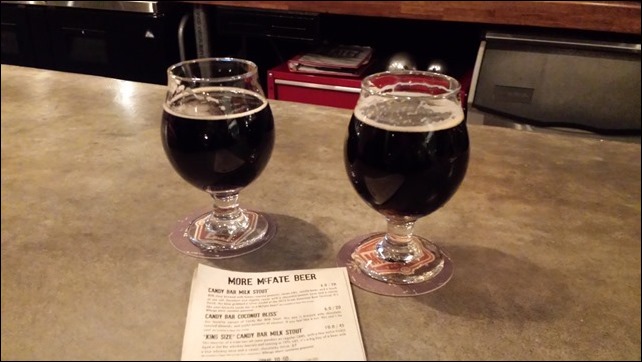 And finally, on Friday we received an email from our internet provider saying our service would be terminated today, Monday, the 21st. Just about two years ago when Millenicom went out of business we switched to a rental plan from an Ebay vendor. For $120/month we’ve been getting unlimited Verizon 4G LTE, and it has worked well for us. With Verizon trying to do away with unlimited plans we knew this could end at any time, and here we are. Jim is getting a new SIM card today and we have signed up with a different vendor who says he is under contract until sometime in 2018. Same price but only 100 GB/mo, which shouldn’t be a problem. Now I hope I can get this published before we get cut off.