When we aren’t on the move I find it hard to sit down and blog, but here I am. We’ve been staying busy with pickleball and ping pong, walks/hikes around the park and surrounding BLM land, working out in the fitness room, chipping away at our to-do list, and more trips to Mexico for dental issues.

Jim was tired of looking at the yellowed headlights on the Subaru, so he researched and found a do-it-yourself kit by Sylvania. The result was much more dramatic than the photos show. 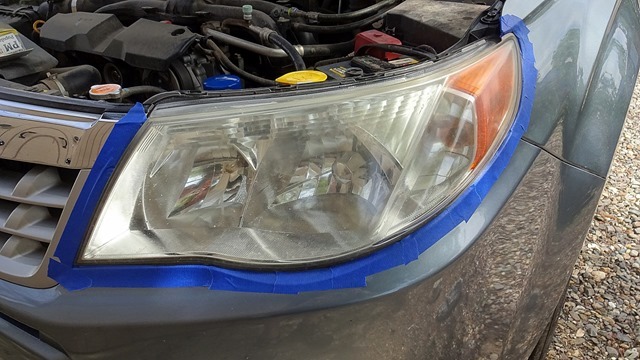 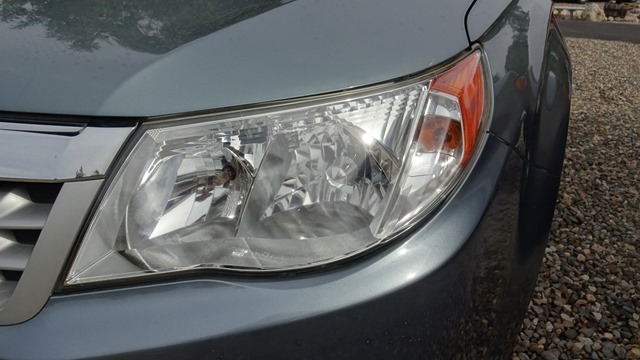 It made a huge difference but it remains to be seen how long the results will actually last. We even washed and waxed the car to go along with the clear headlights, and Jim  also changed the oil. 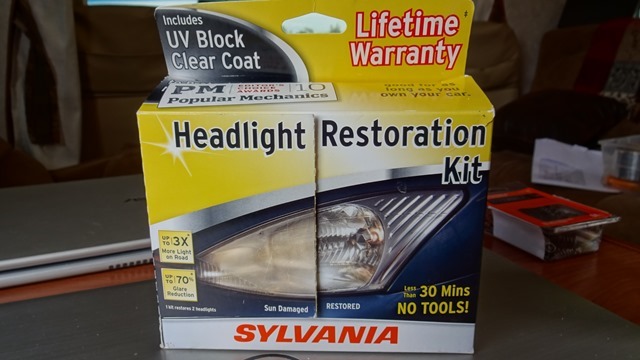 I found some water on the floor behind the toilet which we thought was coming from a leak at the vacuum breaker. Jim ordered a new one so we kept a bowl on the floor to catch the drips for about a week after it arrived because he was dreading trying to get back there to replace it without having to remove the entire toilet. He finally decided to tackle it and found that it was just a leaky grommet, not the entire vacuum breaker, and it was fairly simple to replace. It’s always nice when a repair turns out to be easier than anticipated.

It’s not easy to work on the plumbing in our cramped bathroom. 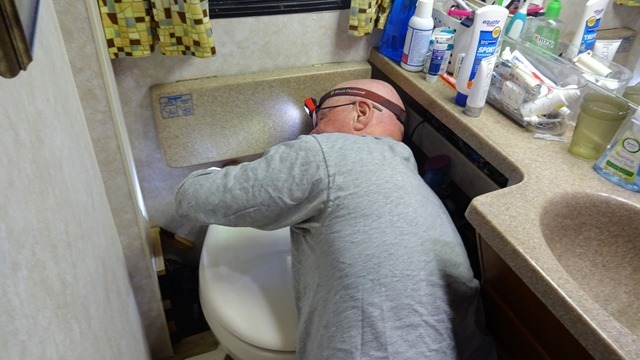 Jim also replaced a couple of vent covers on the roof that were cracked. It has been such a joy to be able to order things we want without trying to figure out how they are going to be shipped, since we now have an address where we can receive packages from any carrier. We’ve been getting lots of Amazon deliveries!

Here are a few photos from one of our hikes behind Jojoba Hills. There are miles of trails on the adjacent BLM land.

The smoke plume is from a controlled burn in the forest. 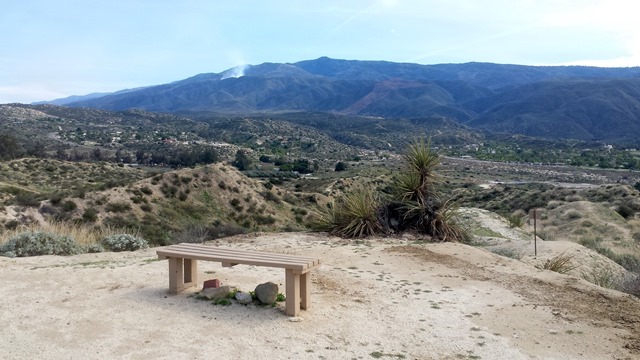 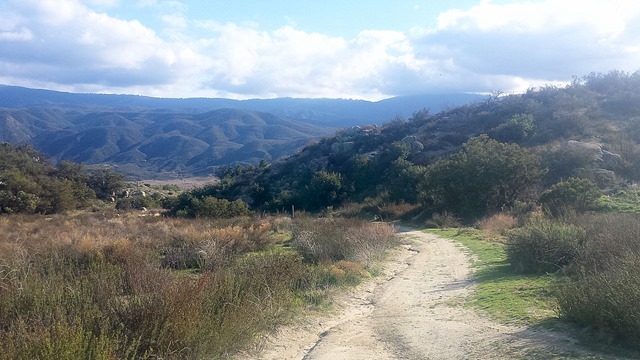 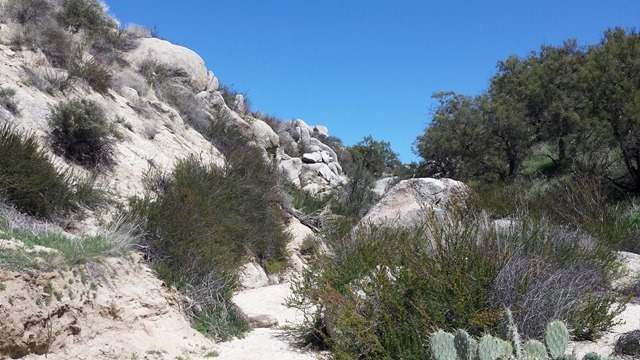 Looking down on the park. 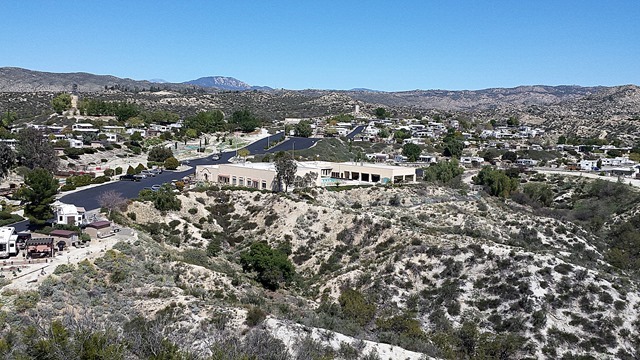 Jim scrambling up some rocks in his camo outfit. 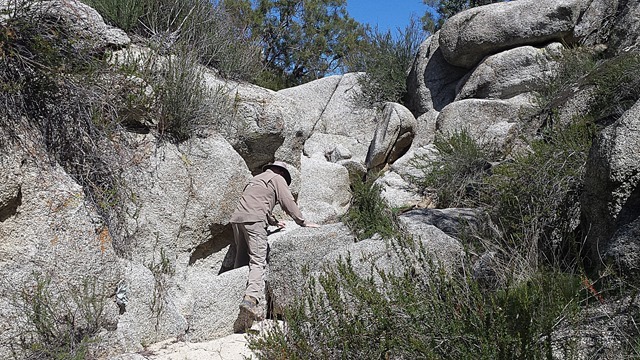 I’ve been pruning trees and shrubs with the landscape committee on Wednesday mornings. Each day volunteers bring home made cookies, coffee and water to the other volunteers. Everyone is always ready for a break by the time they arrive. 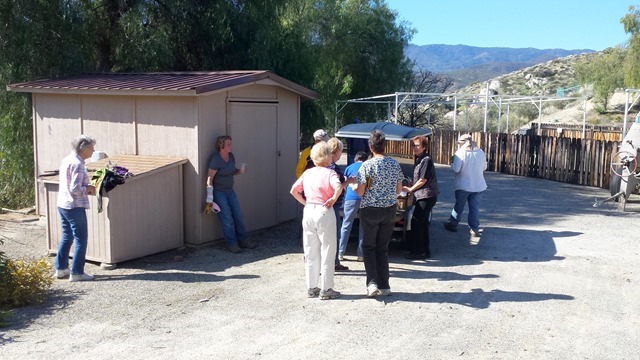 Last Saturday a group of about ten of us helped clean the patio area by the pool, wiping down all the furniture and scrubbing the floors. Hard work! Volunteers do almost everything around here so there are lots of ways to help.

We moved to our new site a bit over a week ago. I love the shade and all the wildlife with the bird feeders and fountain. Our view from inside is blocked by some of the trees but you can’t have everything. It feels odd to actually own patio furniture, a grill, and a golf cart, although the golf cart is having a little mechanical issue which will be looked at on Friday, so we aren’t using it yet. 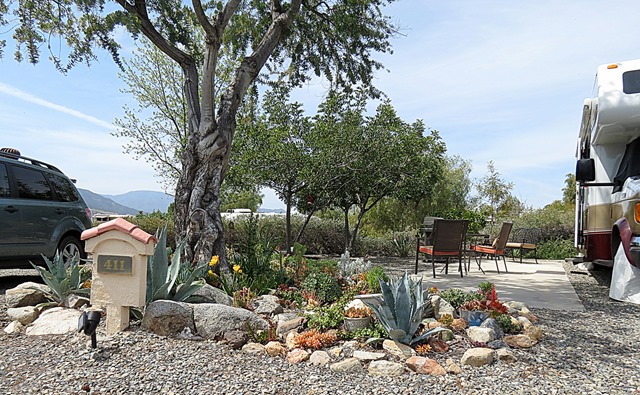 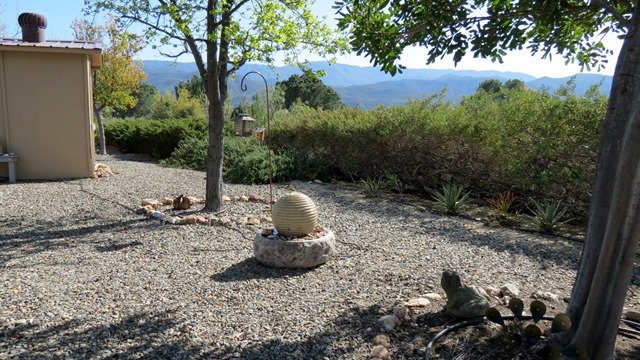 I hope we can keep these succulents alive. 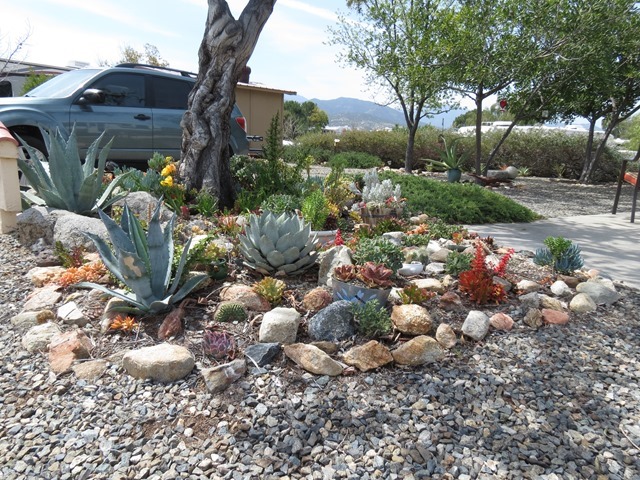 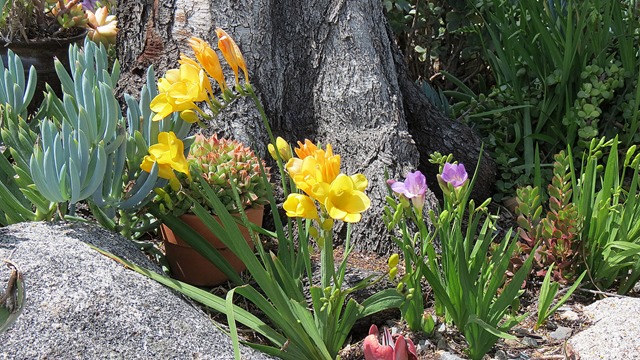 That is Terry and LuAnn’s 5th wheel on the right, but we can barely see it for the shed and vegetation. It’s been nice being able to grill our veggies for a change. 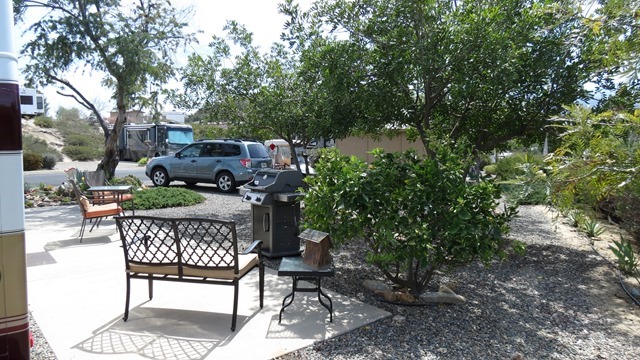 This pair of Mallard ducks has been hanging around our site. They’re very cute, and whenever the female decides it’s time to go the male follows right along, just as it should be 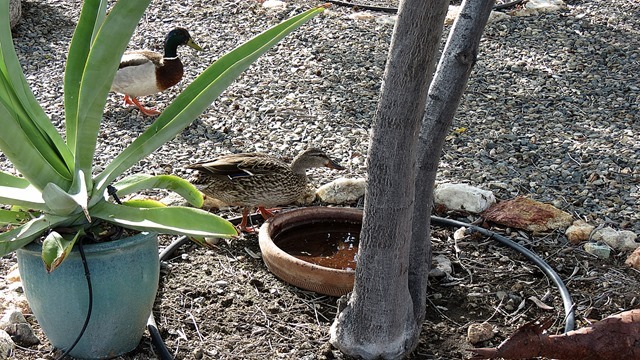 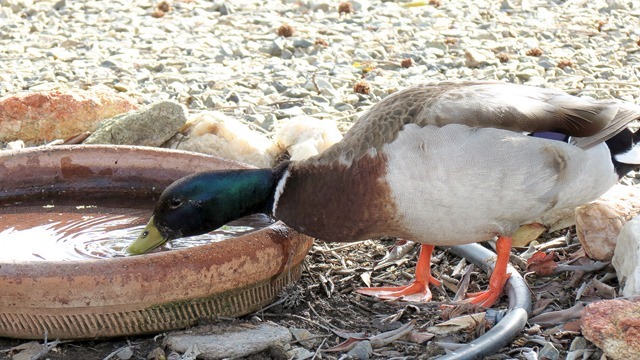 More of our visitors. 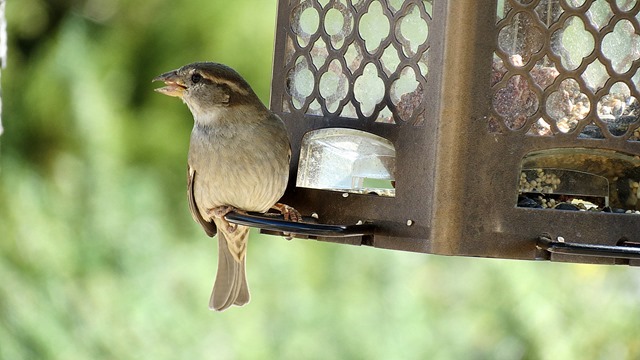 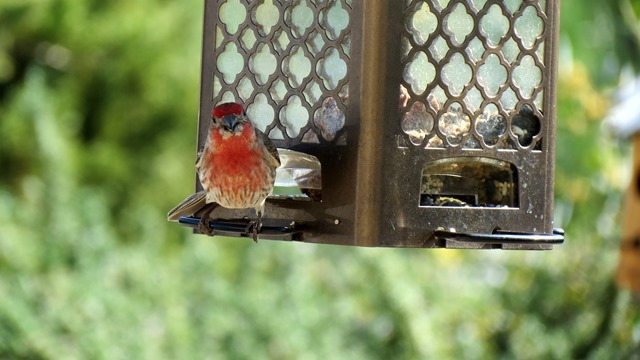 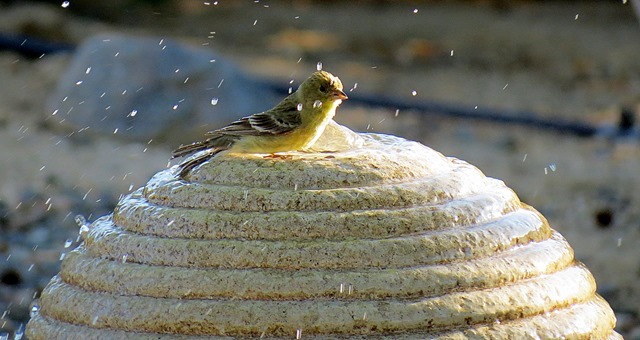 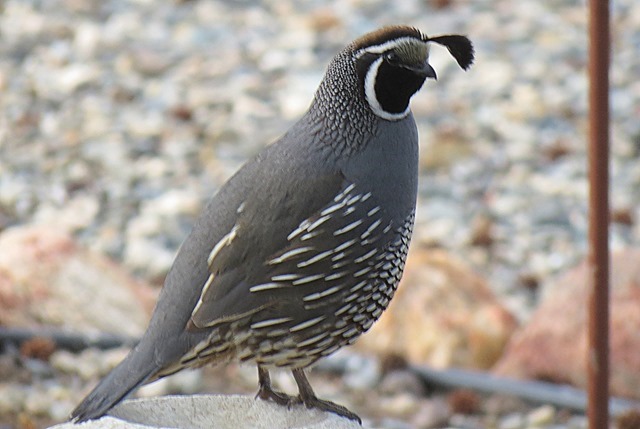 The hummingbirds appear to have so much fun splashing around in the water. 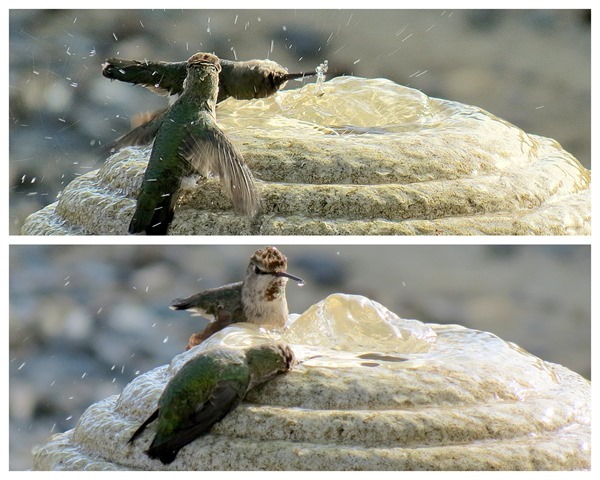 Last Thursday we went back to Tecate to the dentist, where I had deep cleaning done around the tooth with the gum abscess. She said the pocket was very deep and I needed to see the periodontist, who was not there that day, before they would decide if the tooth could be saved.

Jim thought he was getting a filling, which the endodontist recommended when we were there the first time. The dentist who was going to do it looked at his tooth and the x-ray and said he needed a root canal and a crown, not a filling.They both did agree that there was a crack in the tooth. Jim told him the tooth was not even bothering him anymore, and could he just do a crown, since a root canal could always be done at a later date if needed. He said he would not, because that wouldn’t fix the problem, and that was that. Jim spoke with the endodontist and asked him if someone else in the group could do a crown or filling, and he said no. I guess if they disagree, you are just out of luck! It was a very strange visit, and needless to say we left there not feeling very confident about Adame Dental, despite several people here at Jojoba having had great experiences there.

The following day we called Dr. Maria Fonseca in Algodones, who did our crowns last November, and we were told to come in on Monday at noon. It was a scorcher that day, upper 90s, and we were hoping it wouldn’t be very crowded, but were surprised at the number of cars in the border parking lot. I went first, Dr. Fonseca took an x-ray, looked at my tooth, probed around the gum, and said there was a fracture and decay going down into the roots and that even with another root canal the prognosis was poor for saving the tooth.

I was ready for something to be done, and she asked if I wanted it pulled. Jim kept saying I should think about it, but I just wanted it out, so she called the oral surgeon to see if he was able to do it that day, and within 10 minutes Dr. Roy Cabrillo strolled in, numbed me, and had the tooth out of there. They were concerned it might break off and I would need more extensive work to get it out, but it was my lucky day. 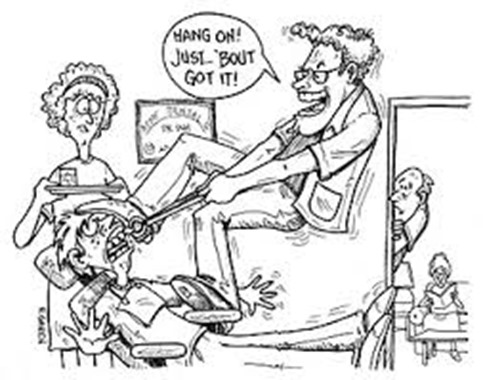 I asked him to put in the bone graft material so I would be ready for an implant if that’s what I decide to do. I had a lot of bone loss from the infection that has probably been there for a long time, so if I didn’t have the graft done at the time of the extraction it would involve a more complicated procedure later if I want an implant. I am glad it’s over, although I really hate losing a tooth. It’s been uncomfortable but nothing that didn’t ease up with some ibuprofen.

Dr. Fonseca agreed that Jim’s tooth could be filled, but that a crown would be a better long term solution given the crack. She also found two small cavities, so she filled them and Jim will get a crown on the other tooth when we go back in six weeks for me to get a replacement crown for the tooth next to the one that was extracted. She said they can have the crowns by the next day so we’ll probably just spend the night in Yuma when we return since it’s a three hour drive from here. Luckily even though the line to get back into the US was a couple blocks long, it only took about 15 minutes to get through customs.

So that’s some of what we’ve been up to the past few weeks.  Oh, and it’s finally warmed up enough for me to make use of this! 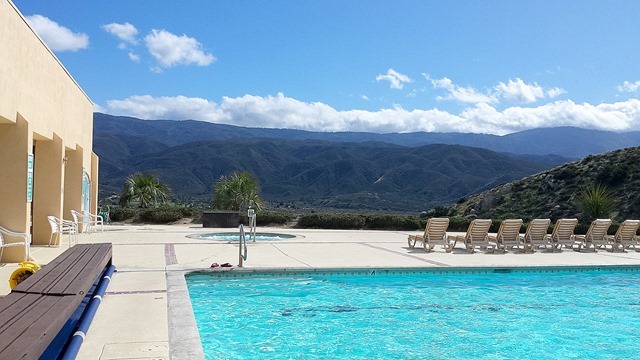