Day Trip to Tecate and Other Stuff 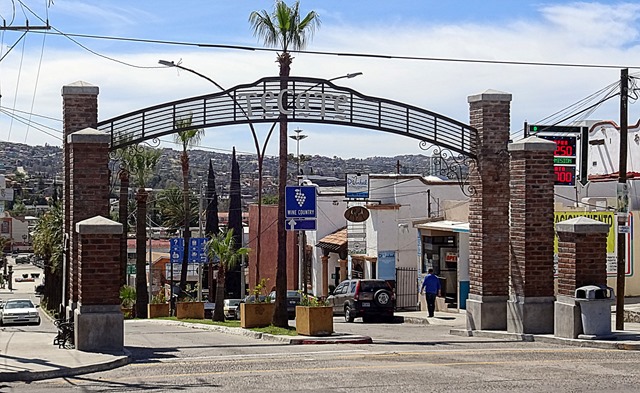 About a week ago I developed a toothache, which was better the following day but the gum was sore and swollen. We had planned to go to Mexico soon since I needed two old crowns replaced and Jim needs one also, but I thought I should get this checked out right away and surprisingly found a dentist in nearby Temecula who could see me on Saturday. She found nothing wrong on the x-ray but gave me a prescription for antibiotics and recommended I see an endodontist for a possible root canal.

Not wanting to spend well over $1,000 on another root canal, since I had one on the same tooth years ago, I asked around at Jojoba Hills and found that many people recommend Adame Dental in Tecate, Mexico, about 100 miles from here. Jim got an appointment also and on Wednesday morning we made the scenic but winding drive south through Julian to Tecate.

We paid $5 to park in a small dirt lot about a block from the border on the US side. 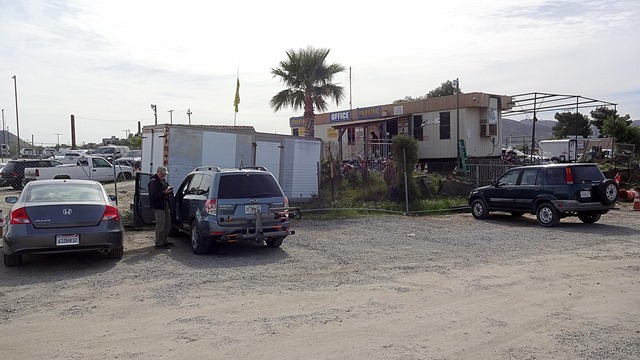 Walk past the duty free store and straight through the turnstiles to enter Mexico. After that there is a customs office where I had to put my purse on a conveyor belt to be x-rayed. 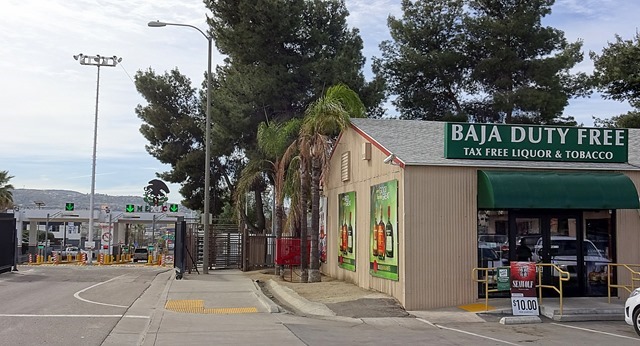 It was so nice to enter Mexico and not be immediately accosted by vendors or panhandlers, since Tecate is not a big destination for winter snowbirds looking for cheap dental, optical or drugs. Adame Dental is just a couple blocks from the border in a very attractive building. 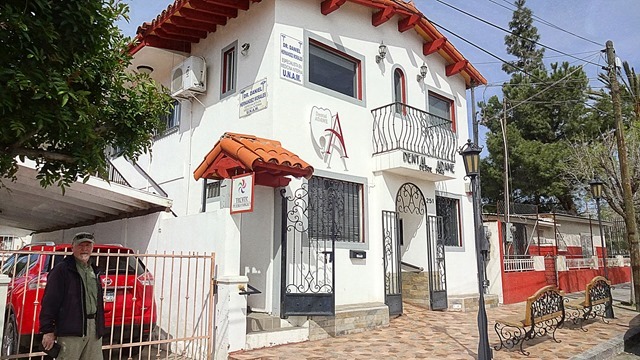 We both saw Dr. Ramirez, the endodontist, and had a consultation and x-ray. He told Jim he thought they could just replace his old filling instead of having to do a crown. He did not want to do anything to my tooth until the infection improves, so we are going back on April 10 when I will have a deep cleaning around the tooth that has the infected gum, and then he will determine if I should just have the crown replaced or if it needs another root canal. The antibiotics have kicked in, my tooth does not hurt, and the gum is feeling much better so that sounds good to me. He also gave me a recipe for a solution of peroxide, baking soda, salt and water to rinse with three times a day, and an antibacterial mouthwash to use at bedtime.

After our appointments we walked to the town square, Miguel Hidalgo park, just a few blocks from the border. The population of the greater Tecate area is over 90,000 but it has a small town atmosphere.

Cute house along the way. 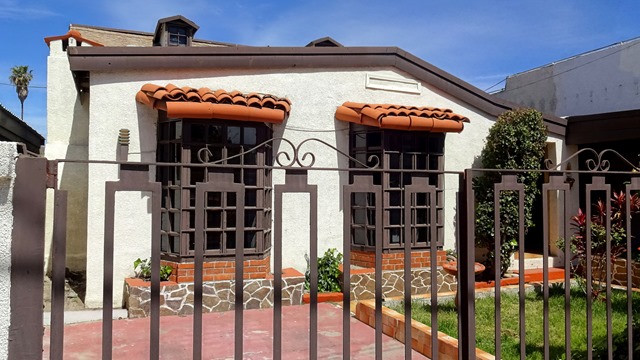 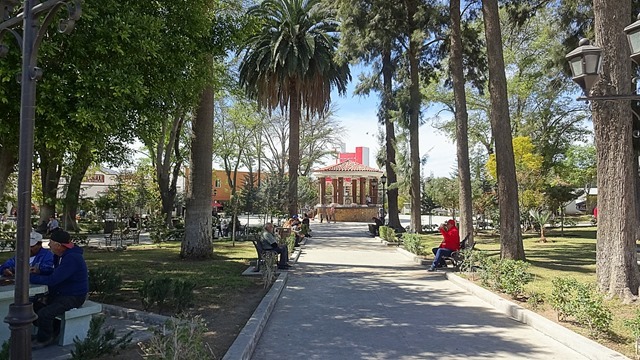 Benito Juarez, President of Mexico from 1861 to 1863 and 1867 to 1872 spoke the timeless words on this memorial “El respeto derecho ajeno es la paz”, meaning “Respect for the rights of others is peace”. 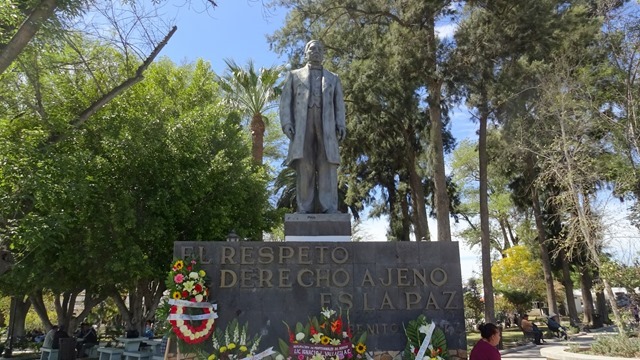 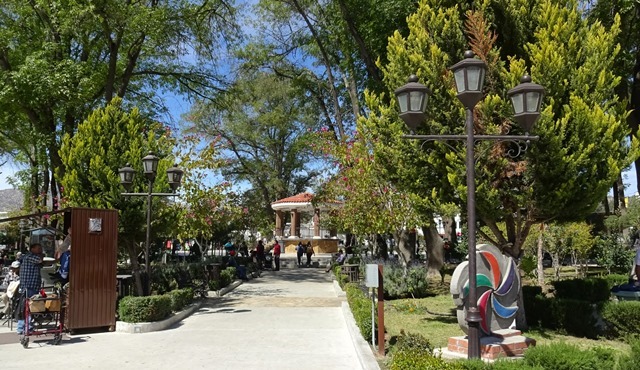 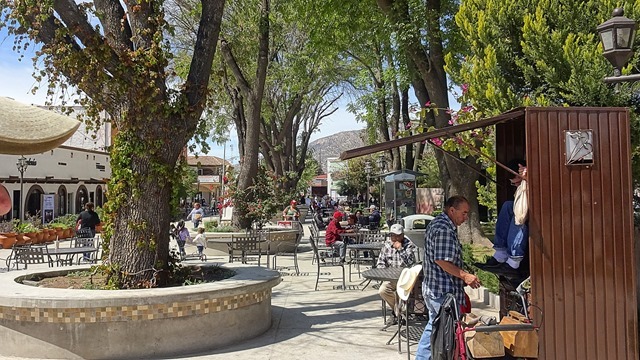 Tecate was designated a “pueblo mágico” or “magical town” in 2012. “The government of Mexico created the 'Pueblos Mágicos’ program to recognize places across the country that imbue certain characteristics that make them unique, historically significant, with great traditions and offer magical experiences to its visitors.” 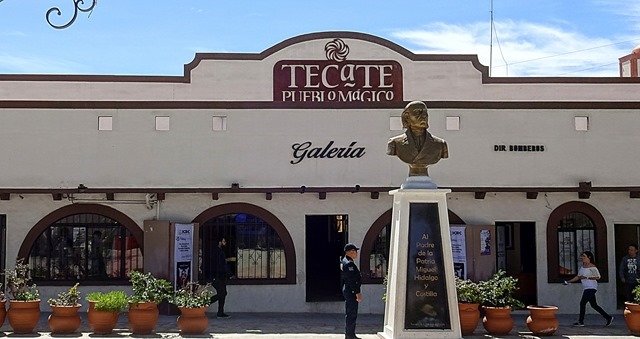 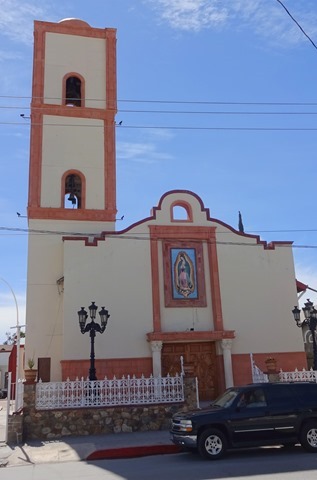 The largest employer is the Tecate Brewery, which stretches on for blocks. 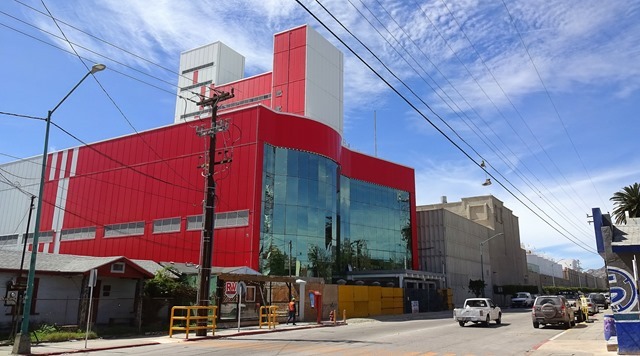 Since we didn’t have numb mouths, on the drive home we splurged and stopped for a slice of pie in Julian, which broke up the drive nicely. Looks like we’ll be making more trips to Tecate over the next couple months.

In other news from Jojoba, we will be moving to a different site after the first of April. As much as we like where we are, this site is unimproved and with the rain we’ve had lately we have standing water and mud in places and don’t want to deal with getting dirt and rocks to fix it up. The couple in the site next to Terry and LuAnn are leaving the park so we are doing a site swap, as they call it here. On paper we are swapping sites but in reality we move onto their site when they leave and they give up our site. In the deal we are acquiring a golf cart, which we may end up selling, and a lot of things we want like a gas grill, patio furniture, some garden tools, a fountain, lawn ornaments, and a very nicely landscaped lot with trees and a lovely view. Pictures to come after the move.

We attended a New Member coffee last week, where we got to meet all the members of the board of directors and also the park employees. Next week there is a block party for the 400 sites, our new neighborhood, to say goodbye to Kent and Cookie, who are leaving, and to welcome us to the neighborhood. It will take place on the newly redone patio next to the pool and spas. 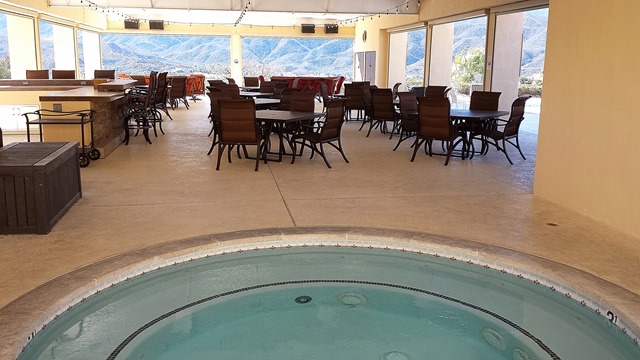 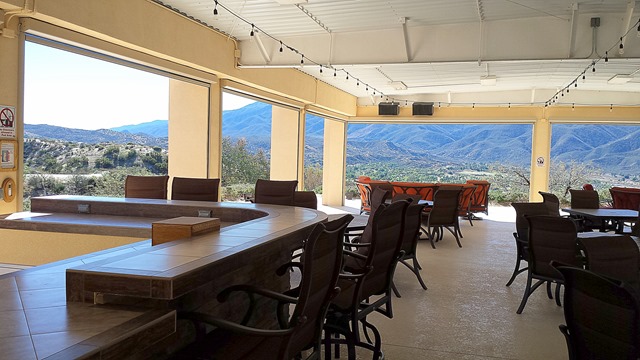 Other than that we’ve played a bit of pickleball and have started playing ping pong in the evenings. There is a good-sized group that plays three nights a week on three tables, doubles only, which gives everyone a chance to play quite a few games. It’s been a lot of fun and a good way to meet people. So far life is not bad here at Jojoba Hills. Just waiting for it to warm up so I can use the pool.

And although I don’t usually talk politics on the blog, I had to share this about the spending bill that was passed today. Nice to see something positive about public lands in the news for a change.