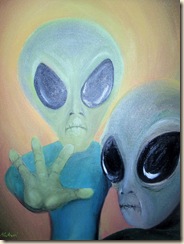 Here we are near Roswell, NM about 12 miles or so away. Got here last Friday afternoon. The lakes in the park are fed from underground streams. They are relatively small but are deep. The deepest is about 90 feet.

The soil surrounding some of the lakes reminds me of Pensacola beach because they are white. The white, however, is not sand but gypsum. 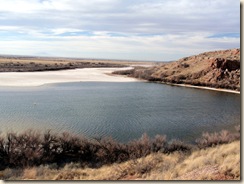 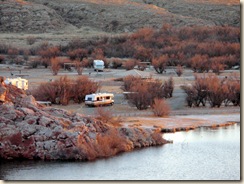 We are camping by Lea Lake in the park.

Since we are in Roswell you must know what that means? Yes, it means new beer to try and no Gayle doesn’t have a drinking problem. 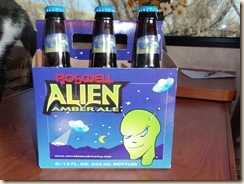 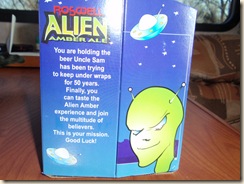 After a six pack the truth is definitely out there. Be sure to double click the second photo and read the text on the carton.

So far this area has been the most featureless part of NM that we have been to but it still has its moments of beauty even without the beer.

We made the required trip to the UFO museum in downtown. Here is a shot from there. 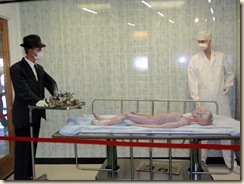 It was more interesting than I had guessed. Yes, it is corny in places but it does make you think. When you see how many people confirmed that it was an alien space ship that crashed it makes you think. Not because of the number of people but who they are. Several military officers some who initially were involved in covering up the truth later revealed the truth.

I certainly don’t know what the truth is and at this point don’t really care but I think we can all probably think of a time where our government has lied to us.

Nothing much more to report. We are headed south to Brantley Lake SP near Carlsbad Caverns tomorrow and will be there for a few days.