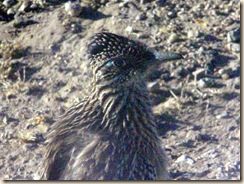 No, the coyote was not after him. I love seeing these guys because they are so funny running across the road. This one showed up on our hood yesterday but jumped down before I could get the camera. He stayed around the camper for a few minutes and I caught a few shots with the zoom. 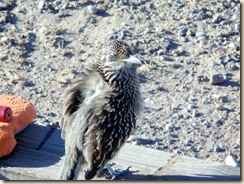 Here he had jumped on the parking berm and opened his feathers between his wings apparently to soak up the sun for a few minutes.

We have had a flurry of mail and packages in the past few days. Since I have learned that the front of the car is getting rock chips from being towed I installed a bra and ordered some headlight film to protect the front end.

We got the water softener and that has made a big difference in the water. So far have filled the rig’s holding tank twice with that.

Two days ago we went into Las Cruces to take Andy to the Honda dealer so he could buy a new car. Prior to that his only transportation was his rig. He bought a Honda Fit and got a good deal as they had plenty on the lot.

We picked up a new bathroom faucet as the one in the rig was cheap and did not work too well. The kitchen faucet seems to be of better quality so no changes there.

Today got 4 halogen lights that we will install above the sofa and the dinette. We saw them in a 2008 LD and wanted a little less light over those areas. Couldn’t find them anywhere so ordered them from Lazy Daze.

Yesterday we hiked up Turtle Back mountain which is adjacent to Truth or Consequences. Pretty steep climb and we got worn out fairly quickly. I got an extra carrot from Gayle for being good. 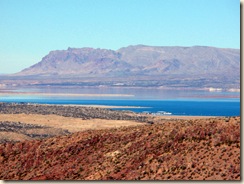 The photo above is taken from that climb and is looking towards the north and Elephant Butte Lake. The mountains on the opposite side of the lake are said to be part of 640,000 acres owned by Ted Turner.

Here is a shot of Truth or Consequences and the Rio Grande River taken from the same location. 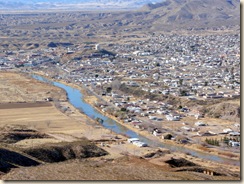 Latest Gayle story: Today we hiked a little and as my reward I was to get my normal thimble of ice cream. Now bear in mind that this is fat free, no sugar and no tasted added stuff. However, it was pretty frozen so Gayle cleverly thawed it out for about 3 minutes in the microwave. Best ice cream I ever drank.

Oh yeah, her butt is much better. I know you were worried.

I leave you with a photo taken just now of the view from our window.

As usual to se a larger version double click on any photo. 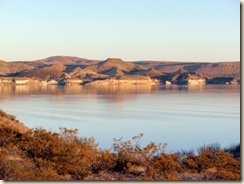