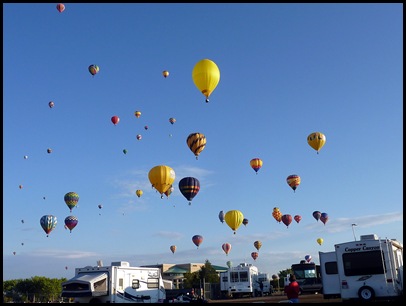 The weather has cooperated, so there’s been a big balloon launch every morning, with most of them coming right over our rigs. You would think it would get old after a couple days, but it is amazing to watch every time. And there are new and different balloons that we missed seeing on previous days. 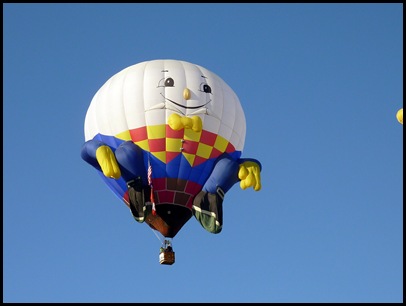 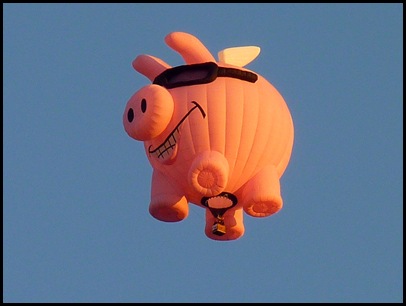 And it’s fun to watch them go down in the RV parking area. The big special shapes balloons seem to have a harder time staying up. This morning was interesting because they had a contest where they tried to toss a bean bag onto a target in a field, but only a few of them actually made it. Must be quite a challenge getting those balloons to go exactly where they want them. 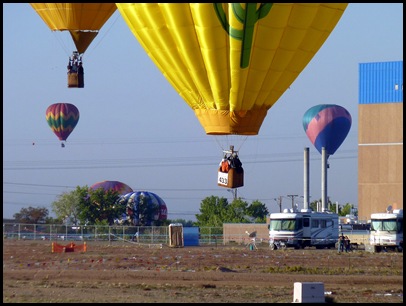 A couple nights ago we went over to the balloon field to watch the “Twilight Twinkle”, where they just inflated the balloons and fired them up on the ground. 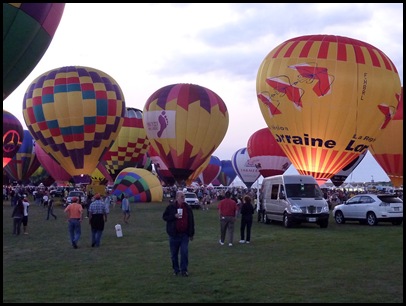 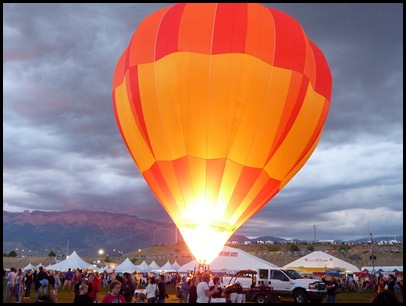 We stood and watched for a long time to try and see all three bees light up together, but they kept getting one or two lit at the same time, never all three at once. On another note, Jim finally bought and borrowed a couple of the right tools, and was able to get our new solar panel connected. We don’t know yet if it’s working properly, since he had to run the generator for the drill, and it was sunny so we were fully charged, but we should be able to tell a difference tomorrow.

And on a sadder note, our good friend Debbie arrived from Minnesota Friday, with her cute little dog, Elton. He had been stung by a bee and his foot got infected, so she took him to the vet as soon as she got here. He had also been coughing for a few days, so they did a chest x-ray. Turns out he has lung cancer, so this has put a damper on her enjoyment of the fiesta. And we feel bad, too, since we got attached to him the past couple winters that we’ve traveled together. He is eating and acting fine otherwise, and the vet said it was a slow growing cancer, so we’re hoping for the best. He is a sweetie and a rescue dog, who spent the first year and a half of his life in a box, so it is especially sad now that he has a good home. Such is life…..