Back at Catalina State Park 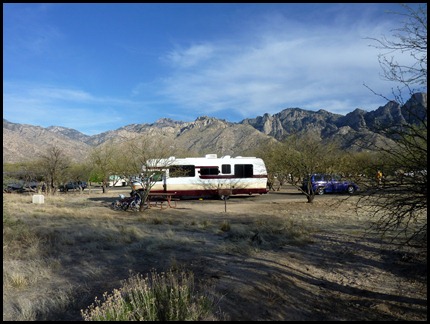 On Monday I tried to convince the woman at Gilbert Ray to let us extend our stay beyond the 7 night limit but she said it was a county ordinance and they were very strict. Since all the camp hosts left on the first of April though, we could have stayed on as hosts with a free site if we were interested in cleaning the bathrooms. We actually considered it since there are no showers there and there were very few people in the park, but if Jim gets released by the eye doctor next week, we are ready to move on out of Arizona.
There aren’t many people here at Catalina, either, compared to the park being full every night when we were here last month. Which meant we got a really nice site.
Haven’t been doing a whole lot, other than some biking, shopping, financial stuff, and planning our summer. We have decided to make our way east to visit friends and family in Indiana, Ohio, and Pennsylvania. Our only concrete plan is to attend the Lazy Daze Regional Adventure in Arkansas the beginning of October. After that we plan to go back to Pensacola, as by then it will be three years since we left. Too long, but we like the west so much we haven’t been able to get too enthused about going back east. Although we do miss our old friends.
On Monday evening we met up with Don and Kim, fellow bloggers from British Columbia who are making their way back home for the summer. We enjoyed meeting them and spending a couple hours discussing our lifestyles and travels.
Last night we had a nice visit with camp hosts Bob and Laurie, who we met last month.They are also fulltiming in a 30’ Lazy Daze.
The sunset was beautiful last night, and the heat wave is finally over. They’re even predicting some rain, which would be nice to help green up the desert a bit. Not a bad place to be stuck for awhile. 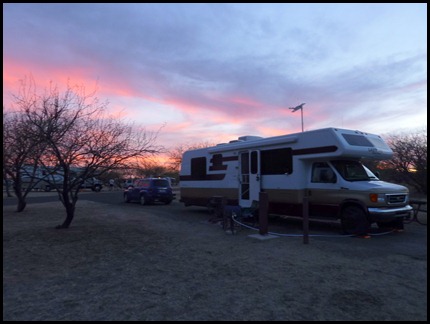