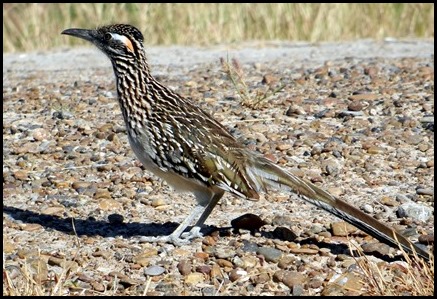 Finally, after 5 months, we will be back on the road Sunday. We are slowly chipping away at our to-do list, to which has been added inspecting our solar panel mounts, after seeing what happened to our friend Pam when she left here a couple weeks ago.

It has been nice to have more free time, so one day Debbie and I visited Quinta Mazatlan in McAllen for a history tour. Jim and I went to a nature photography presentation there last year, and it is an impressive place. There is a beautiful 1930s adobe estate surrounded by gardens and trails, which is now the McAllen wing of the World Birding Center.

They were setting up for a wedding later that day. 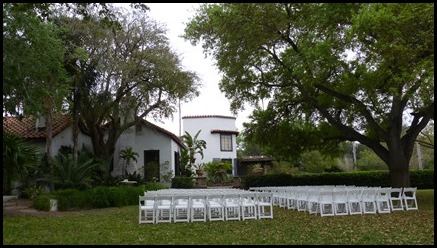 The original owner supposedly had a sign like this at the entrance of the driveway to deter trespassers. He assumed no one knew that an agapanthus was just a lily of the valley plant. 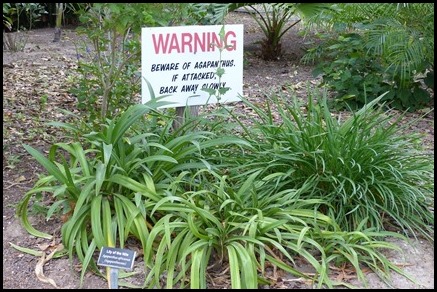 I don’t remember what this is but it was certainly colorful. 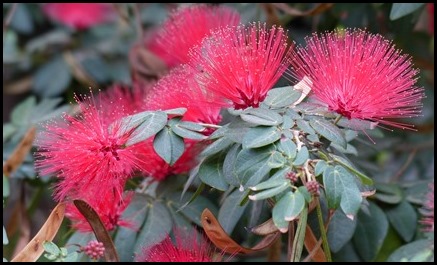 The majority of birds we saw were chachalacas, enjoying a breakfast of oranges. 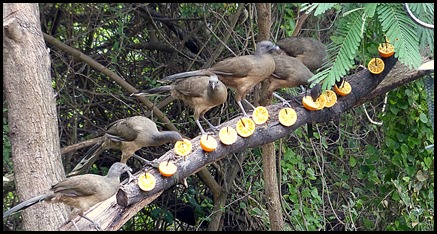 There are several large bird feeding areas like this. It’s a place that’s definitely worth seeing if you’re in the area. 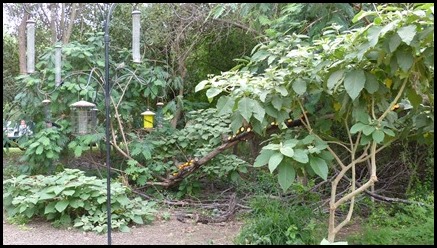 Sunday night was the workamper appreciation dinner in the clubhouse, put on by the park managers. We had 4 gallons of margaritas left over from Wednesday’s margarita hour, so Jim volunteered to fire up the machine and clean it after. Juanita, the manager, mentioned that they needed some music while Jim was filling the machine, so he went back and got his phone, hooked it up to the PA system, and played DJ after dinner. He’s decided this will not be a new career after all, as it is too hard to please everyone’s tastes in music. We did have fun dancing, and the margarita machine was emptied by the end of the evening.

Yesterday Jim and I made one last trip to Nuevo Progreso, Mexico to pick up some cheap Retin-A, which Jim’s dermatologist prescribed for his sun damaged skin. At $3.95/tube he bought 6, which ought to last until the next time we get near Mexico. While we were in Jessica’s Pharmacy, Jim asked if there was a dermatologist in town who could freeze off a few spots. He had scheduled one last appointment with the dermatologist in McAllen before we leave, but didn’t want to have another $300 bill to pay, since we have a high deductible insurance plan. The nice man who spoke excellent English told us to wait in the bar and have a free margarita while he waited on another customer. Yes, the pharmacy also has a bar with live entertainment and dancing, and a dentist’s office. Only in Mexico! Just as we were finishing our drink, he came out and escorted us to another office, where the doctor did not have the CO2 to freeze the lesions. He did call another doctor, who said we could come right over. For $60 he would freeze up to 8 spots, a great deal. Now that we’ve been to Mexico for dental care, we kind of like their relaxed way of doing business. No forms to fill out, just walk in, get treated, and pay. Having a margarita made Jim a little more relaxed, also.

He was so relaxed that after his appointment he wanted to buy a cowboy hat, which he did, for $7.95. Nothing like waiting until we are almost ready to get out of Texas. He wore it on our hike in Santa Ana National Wildlife Refuge, which is on our way back from Mexico. 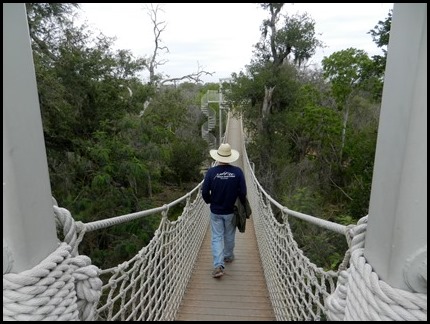 He had to show his new hat off at happy hour last night, and took a lot of ribbing about it. He was a good sport, though. Now everybody thinks he needs some boots to go with it.

This sign sort of sums up the Rio Grande Valley. Understand that this was in the wildlife refuge ladies room in the USA. In a strange way we will miss it here, but look forward to be moving on. 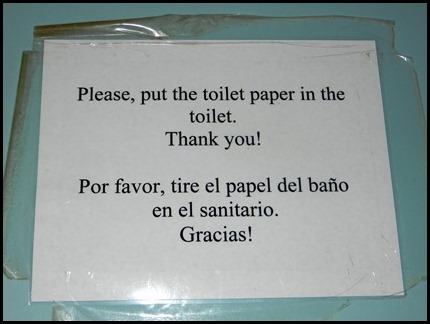