So we’re 75 miles from Yosemite Valley, might as well take a day trip and see what all the hype is about. 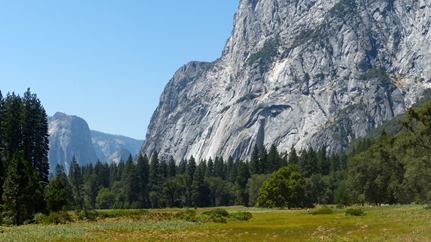 We stopped along Tioga Pass Rd couple times to stretch our legs and admire the views. At around 50 miles, we passed by the parking lot for the Tuolumne Grove of Giant Sequoias. There is a one mile trail down to the grove, so we stopped for a short hike. Debbie volunteered to drive, since we weren’t going off road, but she let Jim drive her car since he tends to get car sick when he’s a passenger. As he pulled the keys out of the ignition, we heard a beeping sound. Debbie thought he accidently pushed a button on the remote, which she does frequently, so we got out and locked the doors. Remember this for later…

The natural range of the giant sequoia is a narrow band along the western slopes of the Sierra Nevada range. The tree grows at high altitudes between 5,000 to 8,000’, and only occurs naturally in about 65 groves, three of which happen to be in Yosemite. It was cool and green along the old road leading down to the grove, a nice walk down, a steep walk back up. 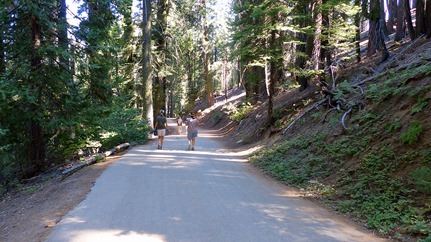 There are about 25 giant sequoias scattered around this area and we had never seen one before. They were big, but they just didn’t move us. Might have been all the people that detracted from the experience. 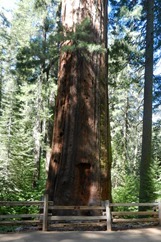 Actually the fallen ones were more interesting, and you could get a much better sense of how big they really are. Have no idea who any of these people are. There was no way to get a photo without someone else in it. 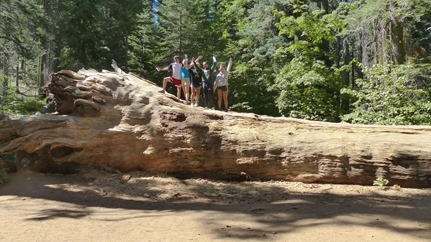 The Tuolumne Grove contains the “Dead Giant,” the first tree to be tunneled in the park, which is approximately thirty feet in diameter at the base.  In 1878, a tunnel was cut through the already dead sequoia tree stump so that wagons, then later automobiles, could pass through it.

The road was closed in 1993 to prevent damage to the ecosystem around the grove. Now throngs of people can walk through it. Yes, we did, too. 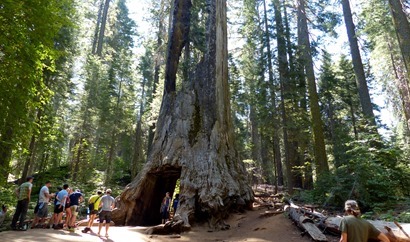 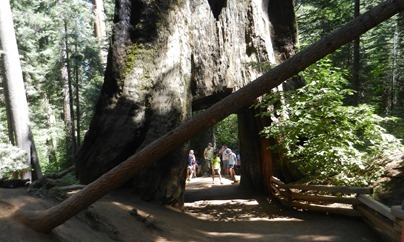 When we got back to Debbie’s car the remote would not open the doors. Strange. Jim used the key to open the door, then tried the button to automatically unlock the other doors. Nothing. He put the key in the ignition and turned it. Nothing again. And that’s when it dawned on him he had turned the lights on when we were driving through the dense forest. The beeping was trying to tell us the lights were on. Great, a dead battery!

We found some nice people who helped us push the car out into the parking lot, which was quite entertaining with all the traffic coming and going. They thought Jim could get it started by popping the clutch since it has a manual transmission, but that must be something that was only possible on older vehicles. Fortunately another friendly foreign couple had jumper cables and got us going again. They made our day! They were having problems with their car overheating and asked Jim for advice but he was unable to reciprocate with any help.

We then continued on about 20 more miles to the Valley. We wanted to drive through one of the Pines campgrounds I had tried to get reservations at. What a nightmare! It was packed with families, kids on bikes, tents, RVs of every kind, seemingly on top of each other. Driving down two loops was enough to convince us we didn’t want to stay there anyway. Then we parked along the road near the Visitor Center to stop and stretch our legs.

A little farther down the road we stopped at El Capitan Meadow and got to watch some climbers. 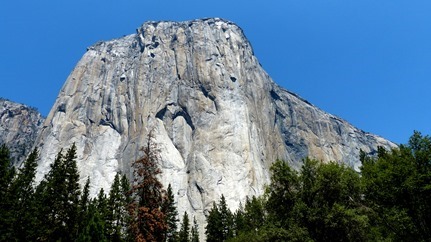 Had no idea they were there, but we saw an open air tour bus stop and everyone was looking that direction. It was hard for me to watch them through the binoculars. They were much higher up than the ones we saw on Lembert’s Dome a few days ago. 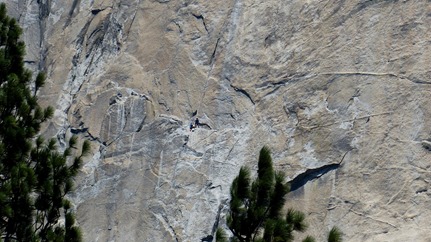 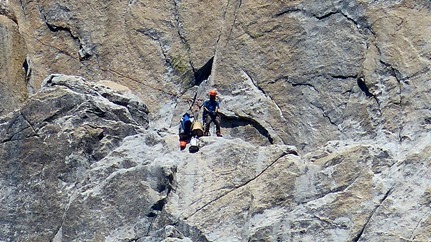 It was a pleasant drive through the Valley, with the Merced River flowing alongside the road, and the impressive surrounding granite cliffs. BUT, not in the middle of summer! At least for us the crowds spoiled it. 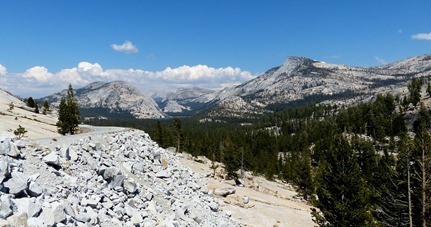 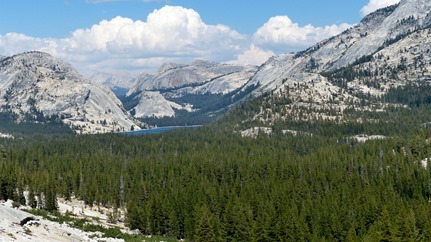 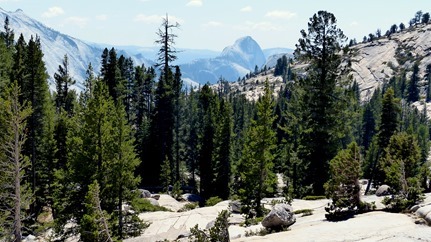 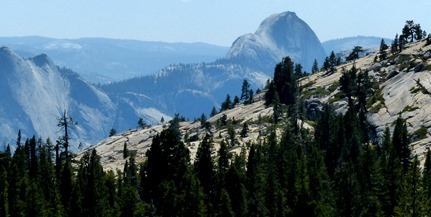 We’re glad we made the tour, but like Jim said, if we had a bucket list you could scratch Yosemite Valley off. I still wouldn’t mind hiking some of the waterfall trails in the spring, but we won’t go out of our way to do it. And although it would be convenient to camp in the Valley, we would try to find somewhere else to stay.

The day after we arrived here at our prime spot overlooking Mono Lake, a woman in a truck stopped to ask us when we were leaving. We told her we had only been here one night and would probably stay at least a week or two. She said she had found another spot a few miles down the road, and the next morning we saw her truck pulling a travel trailer heading in that direction. Last night a little past eight, she pulled up and stopped in the road, with the trailer attached. We saw her get out of the truck and head towards our door. Jim went out and she said she had a question about an eye problem she was having.

Okay, so I worked in ophthalmology for 30 years, but in our brief conversation 10 days previously we didn’t discuss our careers. She was afraid she was having a retinal detachment and wondered if any of us knew the symptoms. Guess it was her lucky day! I asked her what was wrong and she said her right eyelid was a little droopy and the eye was a bit red and irritated. I assured her she was not having a retinal detachment, and she was so happy to hear that. She had planned to stop at the coffee shop in Lee Vining to research it on the internet, and now she could just make her way towards home in Hawthorne, NV, without being so worried. I was happy to have been able to help her, but it was such a strange conversation. We do meet some interesting people out here. 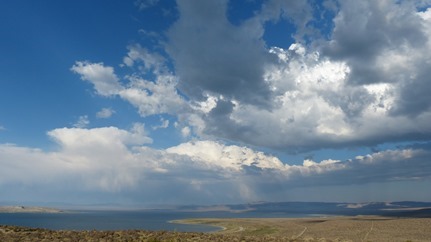