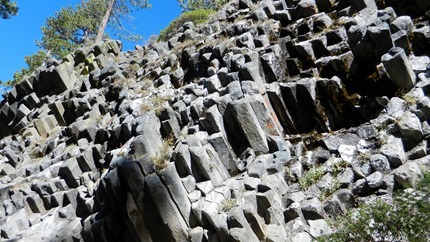 With such an intriguing name, there was no way we could pass up a visit to this national monument near Mammoth Lakes. Devils Postpile is a unique geological formation created about 100,000 years ago when a large lava flow began to cool. As the lava slowly cooled, contraction caused vertical cracks to form, which produced these basalt columns that average 2 feet wide and 60 feet tall.

The base  is covered with broken columns. 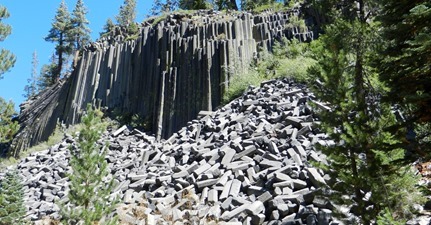 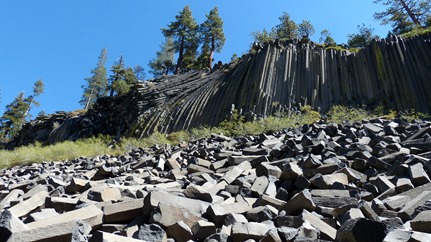 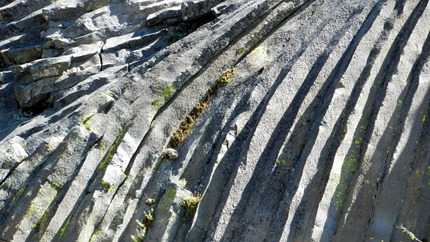 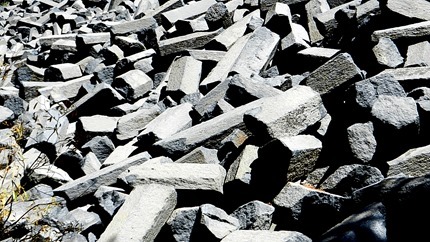 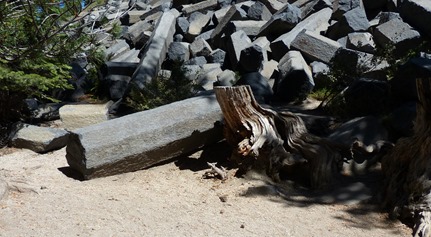 The trail to get to the postpile is easy and short (less than a half mile). From there you can take a steep trail to the top of the columns. This area later came in contact with a glacier which left a polished surface and glacial striations on the top. 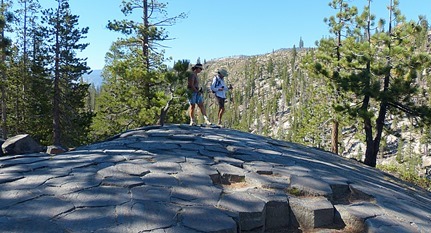 Many of the columns are hexagonal, and reminded us of an old tile floor. 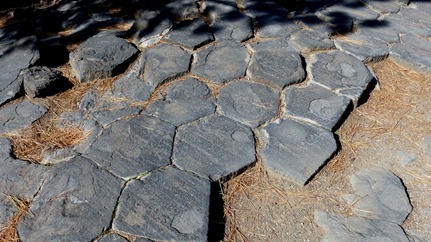 The trail continues on another two miles to Rainbow Falls and follows the Middle Fork of the San Joaquin River. 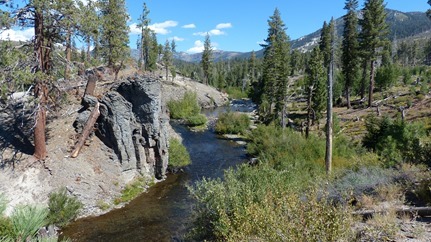 Much of the national monument is in the Ansel Adams Wilderness, where the Pacific Crest and John Muir Trails merge into one through the monument. There was a fire here in 1992, and a freak wind storm in November 2011 with 12 hours of 100-180 mph winds. Both of these events resulted in many dead and downed trees. 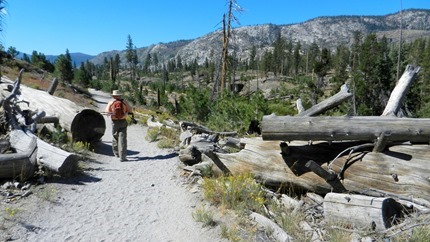 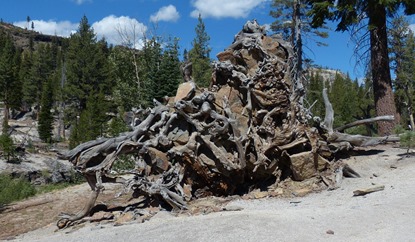 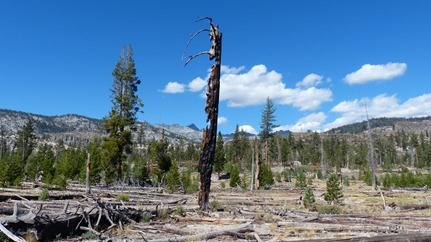 There is a lot of new growth since the fire, and some areas looked like a Christmas tree farm. 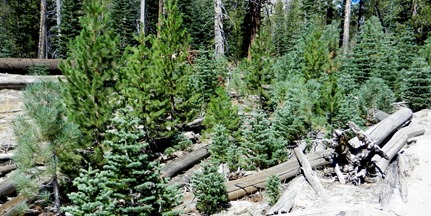 The trail to the falls was fairly easy, but if you want to go to the base there are almost a hundred steep steps to get down.

First glimpse of the top of the falls. 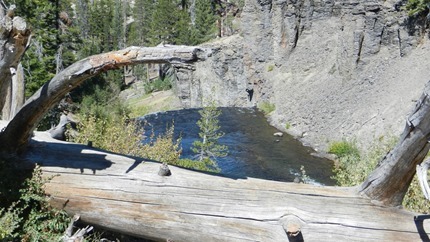 From the first viewpoint. 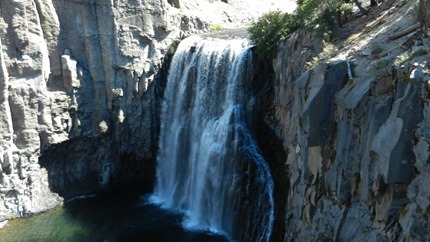 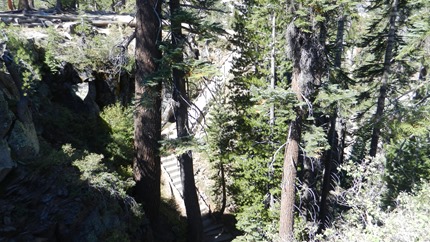 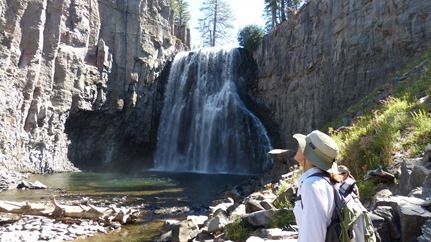 It is called Rainbow Falls because the mist creates a rainbow when the sun is directly overhead. We were there too early in the morning to see it. 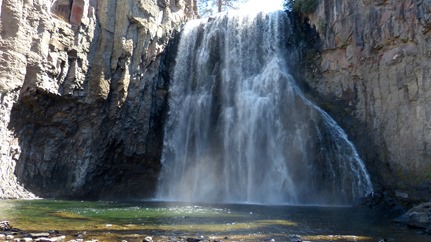 It’s quite an impressive 101 feet of falling water. Jim played photographer for a group of people and dogs. 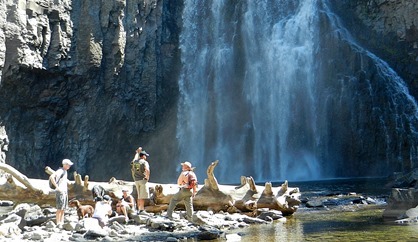 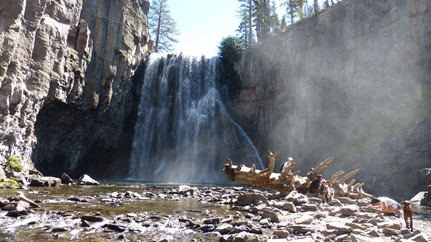 If you want to visit Devils Postpile during the summer there is a mandatory shuttle bus. It runs to the Wednesday after Labor Day, so we waited until Thursday when we could drive our own car. We’re glad we did, as it is a very steep, windy road and we both tend to get a little queasy riding in buses on roads like that. The shuttle cost $7 per person, no discounts. Our entrance fee was $10 per vehicle, but free with Jim’s senior pass.

Also there are some places to pull over along the way to get a good view of the Minarets, a series of jagged peaks in the Ritter Range of the Sierra Nevada. On the way up it was obscured by clouds, and on the way down the light was wrong, but it was a nice view anyway. 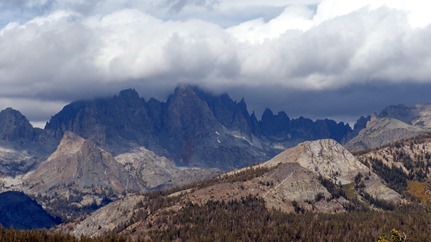 As with so many of the national parks, this one’s existence had been threatened. It was originally part of Yosemite, but when gold was discovered near Mammoth in the late 1800s it was removed from the park. Luckily the columns were spared when the mountains were dynamited for gold.

Then in the early 1900s a hydroelectric dam was proposed, which called for destruction of the postpile. A group of conservationists petitioned President Taft, who finally proclaimed it a National Monument in 1911. It’s definitely worth a visit if you’re in the area.

Our big wildlife sighting on the trail. Maybe one day a Steller’s Jay will sit still long enough for us to get a good photo. 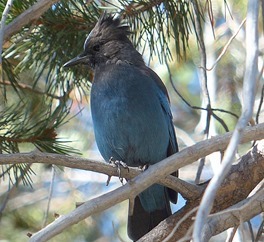