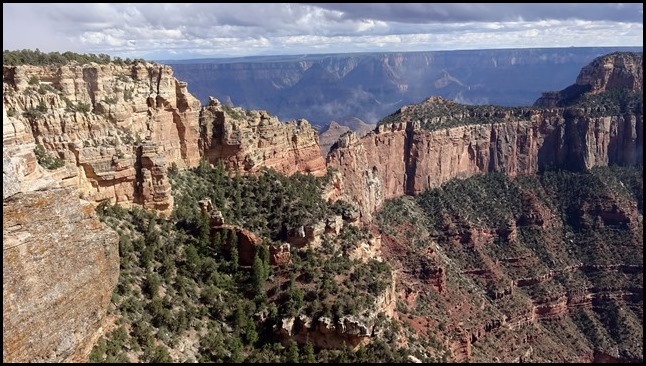 We’ve wanted to visit the North Rim of the Grand Canyon for years but our timing was never right, so this year when we decided to spend part of the summer in Colorado, we discovered that the North Rim could be right along our route. We also had an invitation from Gaelyn (Geogypsy), park ranger extraordinaire, to spend a few nights parked next to her in the employee residential area, so how could we pass it up? 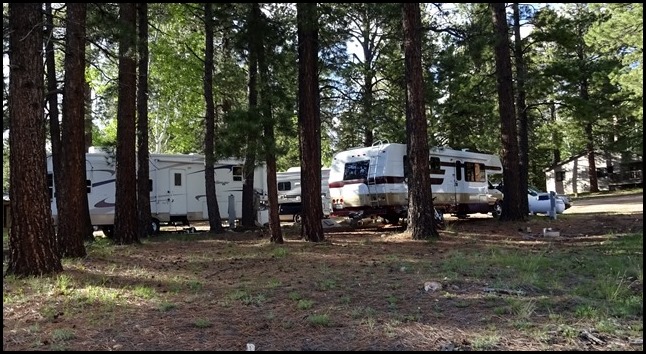 Unfortunately it rained most of the day we arrived, but we decided to put on our rain gear and take a walk in the late afternoon when it slacked up a bit. The Transept Canyon trail goes from the residential area to the lodge, skirting the rim of the canyon most of the way. Despite clouds, drizzle, and cold, it was still a beautiful hike. 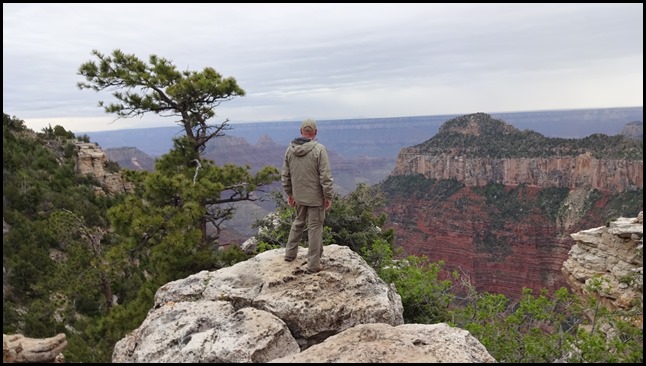 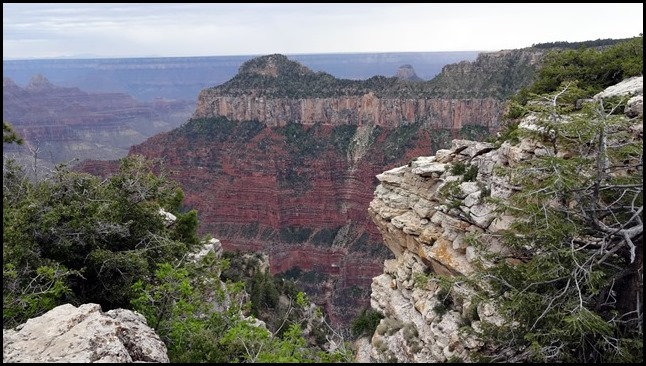 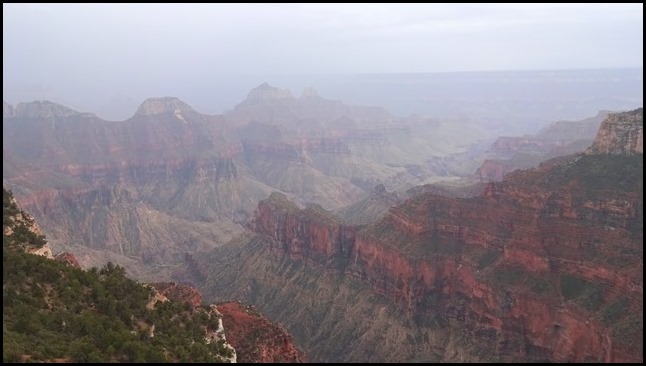 It was raining pretty hard by the time we got to the lodge, so we wandered around checking out the menus in the restaurant and lounge, and browsing in the gift shop. By the time we started back the rain had stopped.

North Rim Lodge from the trail below. 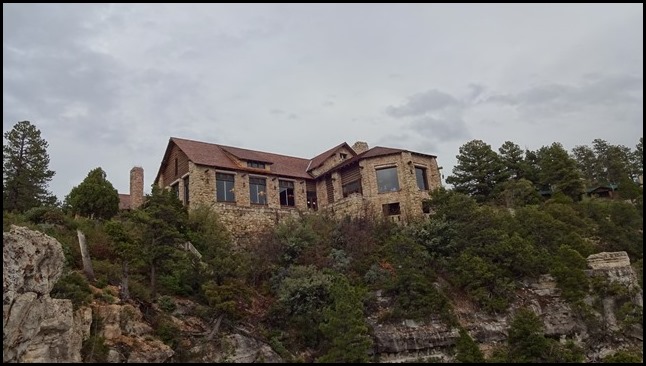 It rained all night and the following morning but the weather report sounded more promising for the afternoon, so with Gaelyn as our tour guide we drove to all the overlooks along the paved roads and did a few short hikes. We got very lucky as it stopped raining and we were treated to some wonderful fog and clouds rolling through the canyon. We took way too many photos! 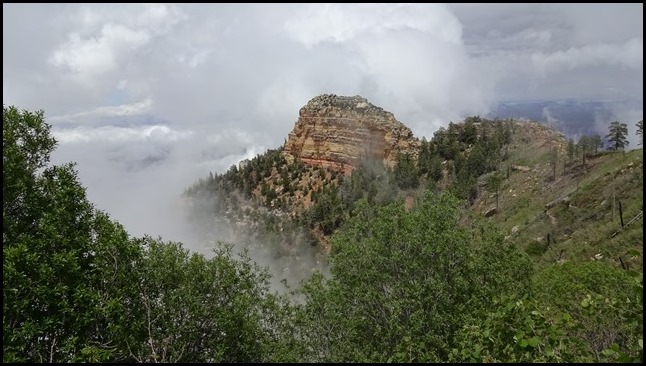 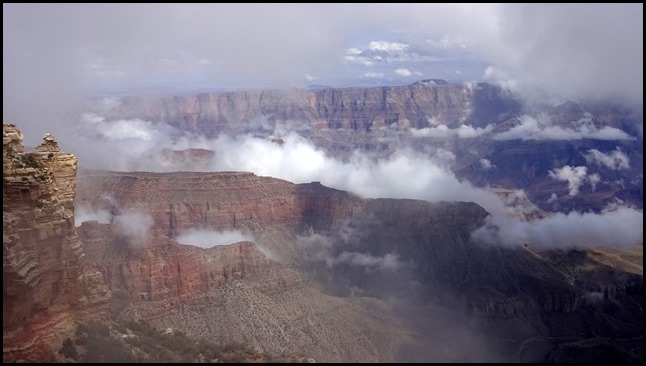 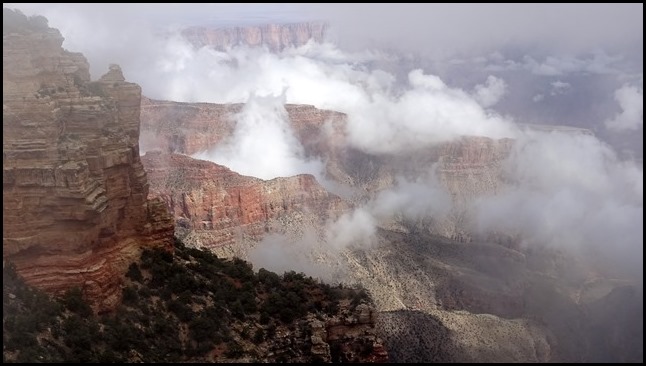 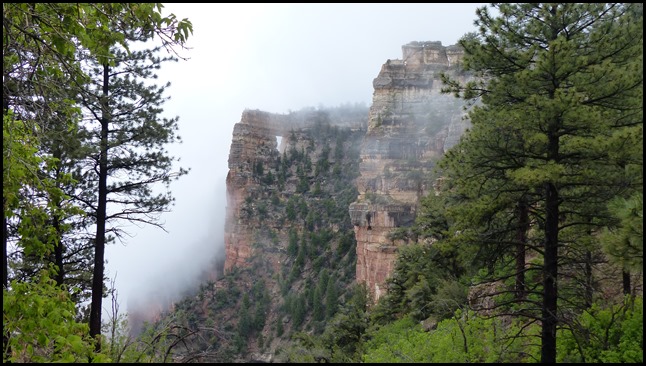 You can get married here. 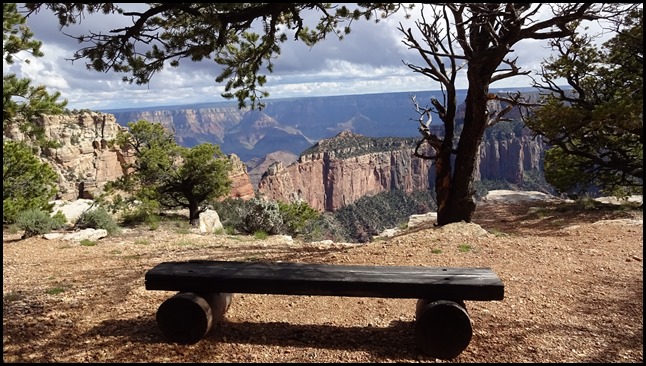 Gaelyn and Jim snapping one shot after another. 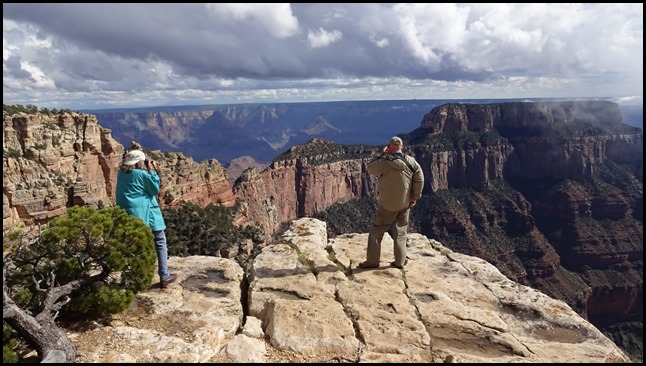 Me and Gaelyn in the fog. It was incredible to watch the quickly changing scenery. 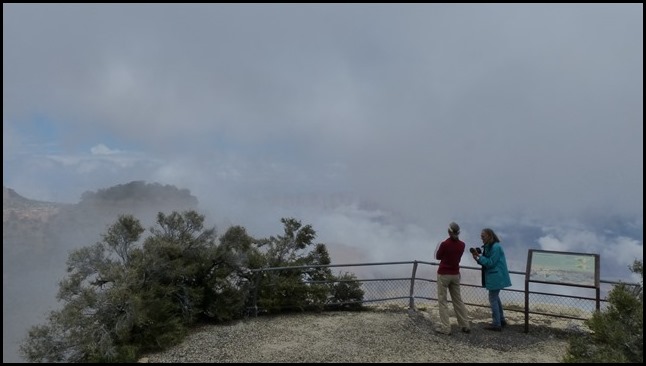 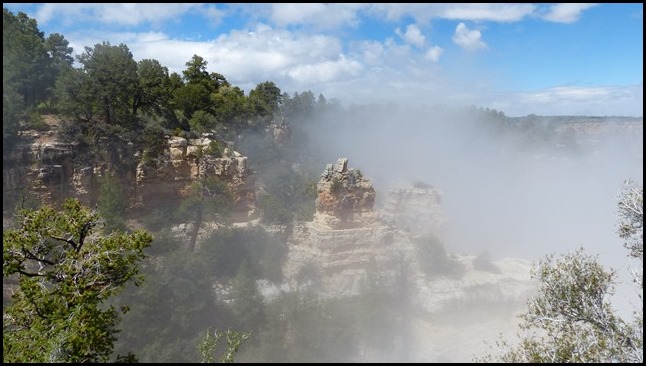 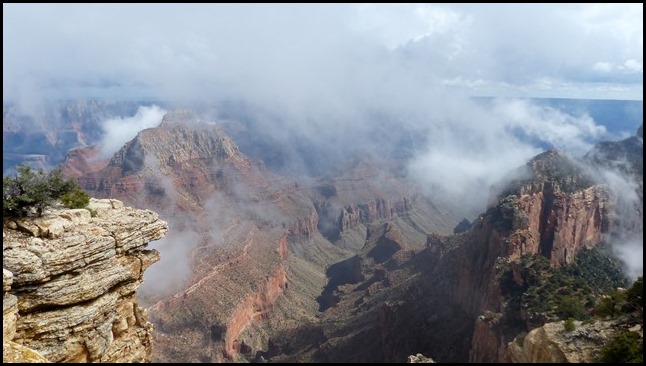 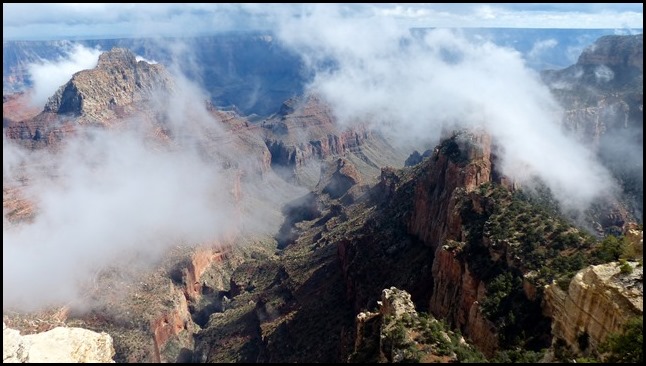 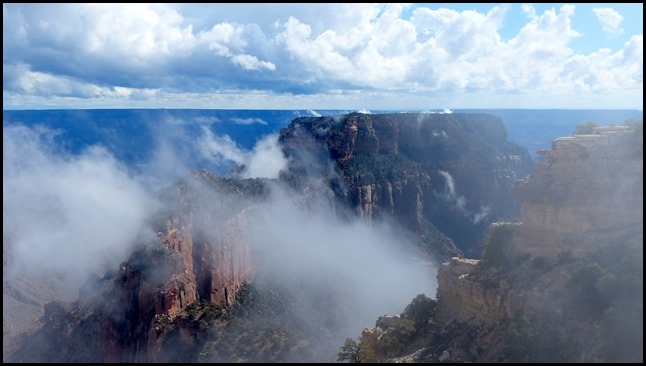 By the end of the day it was quite clear and pleasant but we were so glad we got to see the canyon with the clouds. 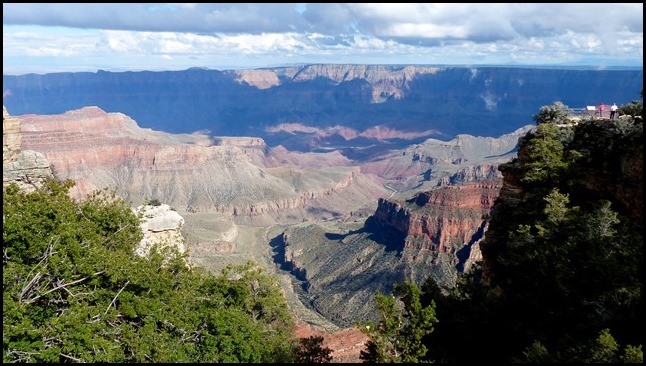 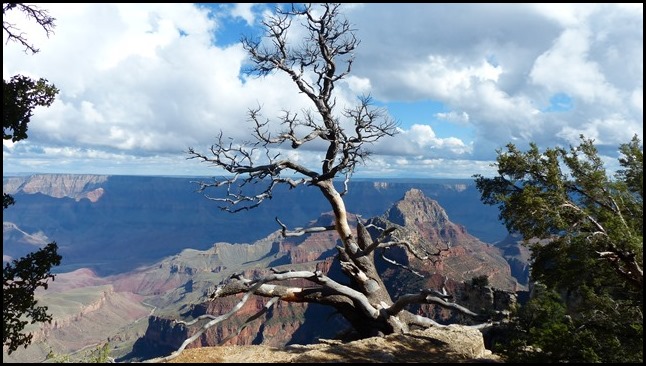 On our final overlook of the day Gaelyn ended up answering some questions from other visitors. She works even on her days off. And this was the biggest crowd we encountered all day. It’s not like the South Rim! 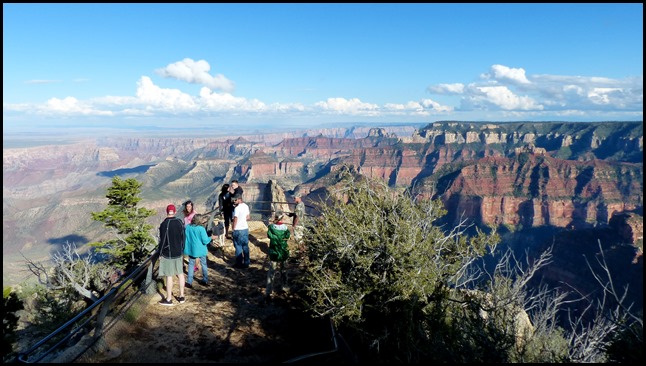 Yesterday we met Gaelyn’s friend Bill from Kanab and took a drive on some of the dirt roads in the Kaibab National Forest to Parissawampitts Point, one of the few places she had not been, and went for a 7 mile hike on the Rainbow Rim Trail. We had a great time on the hike, but only took a couple photos since the views were limited to the point. We gave Ranger Gaelyn a hard time for taking us on a hike along the North Rim with no views, but the conversation was so stimulating (religion, politics, you name it!), we didn’t have time for photography anyway. 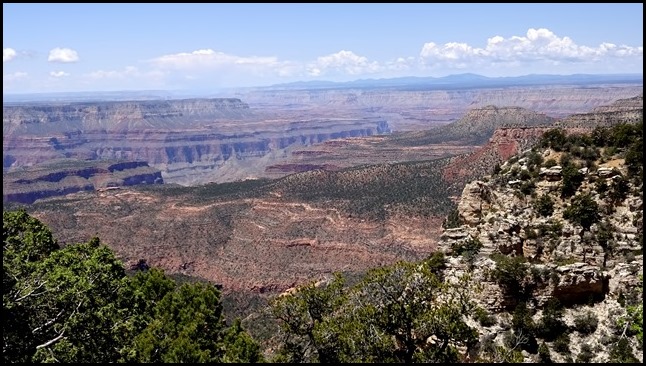 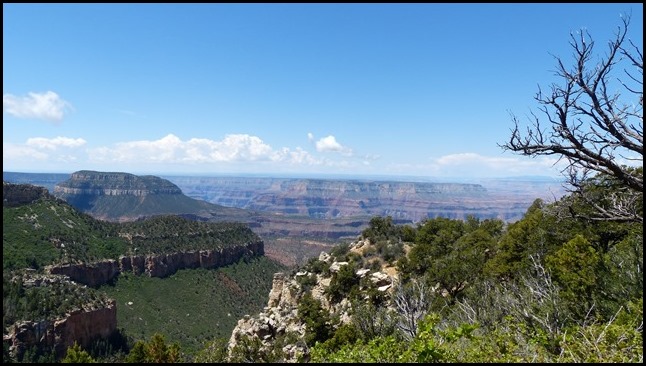 We made a stop on the way home at this fire tower, where Jim was the only one to climb the 120 feet up. There is a guy who mans it and works Monday through Friday 8-5. He invited Jim in and he said there was barely room for both of them inside. Just can’t imagine doing that job, but he does have a Verizon signal up there. 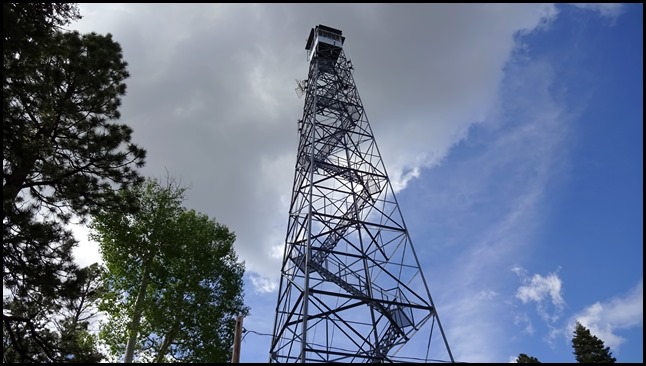 And this is what he saw from the top. 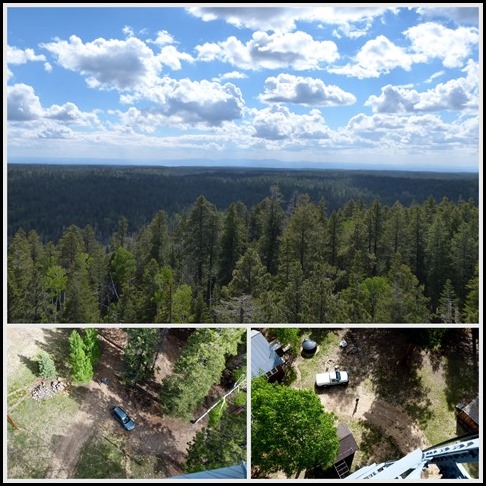 We’ve really enjoyed the North Rim so far thanks to Gaelyn, if we can only remember half of what we’ve learned from her. It sure is nice having friends in high places like the Grand Canyon!

Today we’re moving over to the campground where I got a cancellation for a couple of nights.