On Saturday we drove 6 miles up Kebler Pass Road from Crested Butte to Irwin Lake campground for the western (easier) approach to Scarp Ridge. With six people we needed to take two cars, which worked out well since Chuck, Carla and Debbie hiked two miles to a lovely basin, and Chris, Jim and I continued on another mile or so up to the ridge. The trail is really a rocky jeep road for over two miles but fortunately we were only passed by a few vehicles. 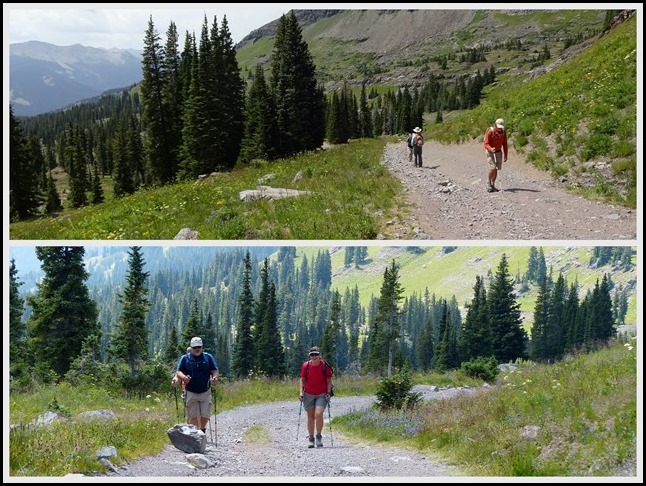 It’s a fairly steep climb up the road where we passed a couple houses, waterfalls, and lots of flowers. 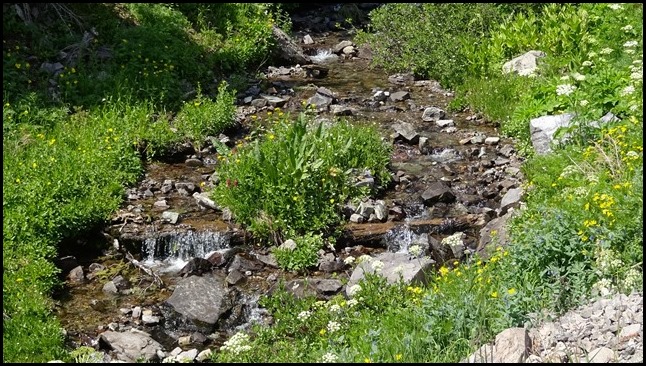 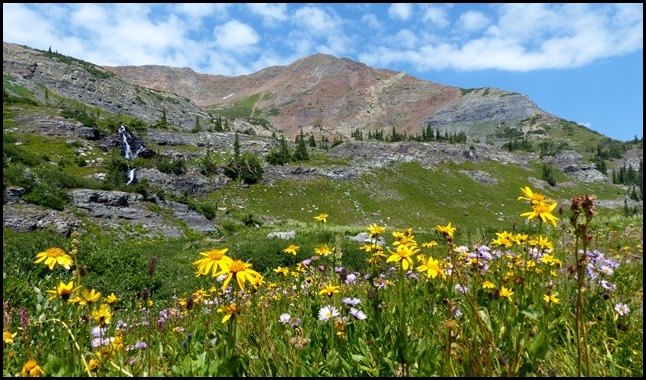 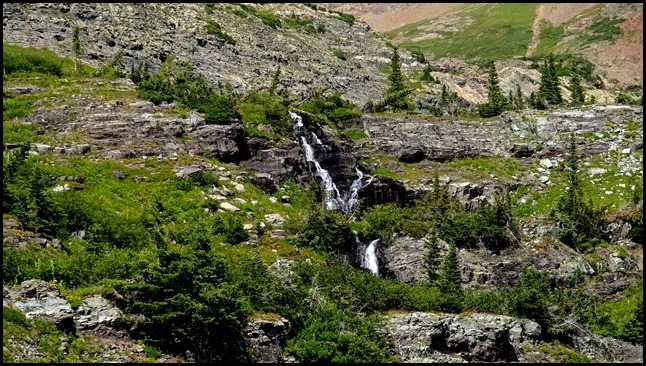 Prepared for the winter. 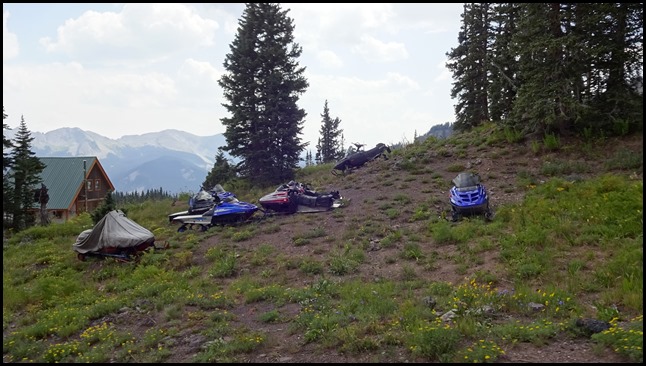 At around two miles the road levels off and to the right is a nice rock outcropping, where some other hikers were stopped to eat lunch. It was hazy over Lake Irwin. 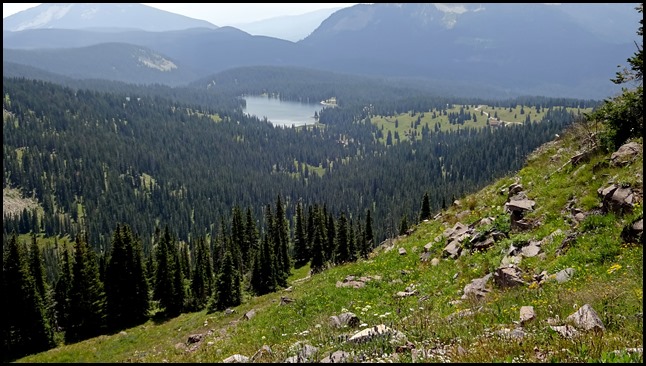 We could see a faint trail ahead but weren’t sure if that was the way we should continue so I went to check it out. 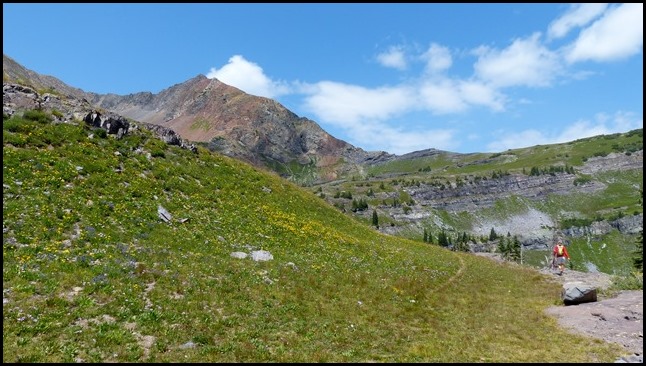 The views into this beautiful basin just kept getting better. 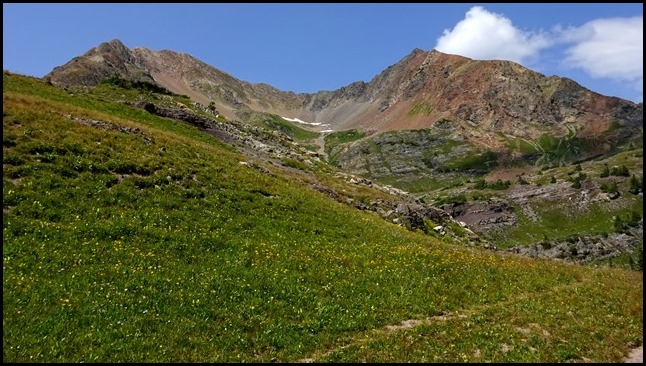 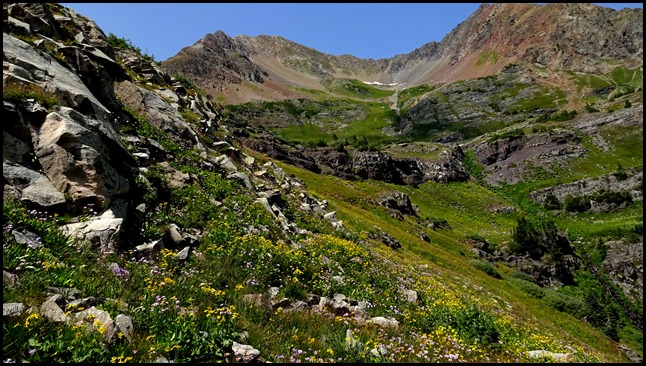 This is where the other half of our gang decided to turn back for a little over 4 miles round trip. It’s a good workout with great views up to this point, but we wanted to get up on the ridge. 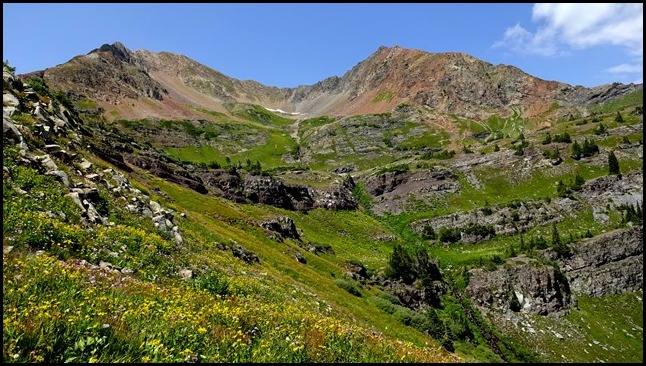 So up the steep road we continued, although it soon leveled off. We came to a fork in the road and asked some other hikers where the trail was. They said it depended upon where we wanted to go, either up to the ridge or up Ruby Mountain. Looking at the faint trail switchbacking it’s way up Ruby Mountain we chose the trail to the ridge. Maybe another day. 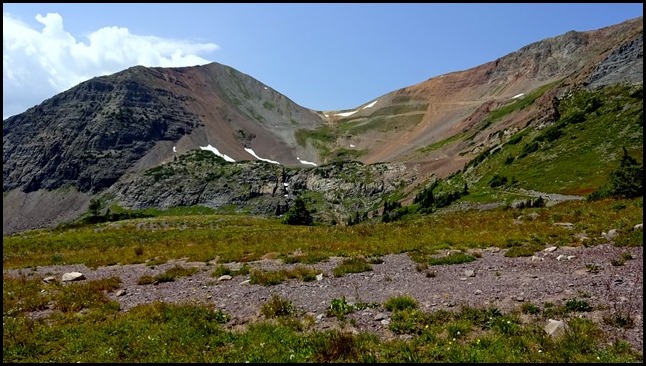 Then we soon lost the trail, crossed a patch of snow, and had to bushwack our way to the trail we could see in the distance. The people we asked for directions went a different way where they also lost the trail and ended up ultimately following in our tracks. 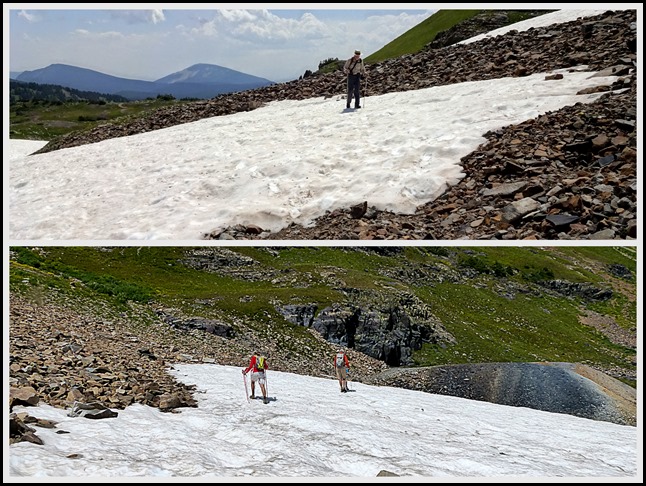 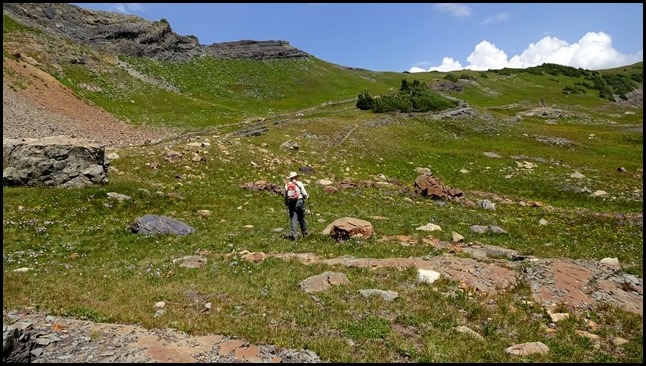 After one more steep climb up we were on the ridge. 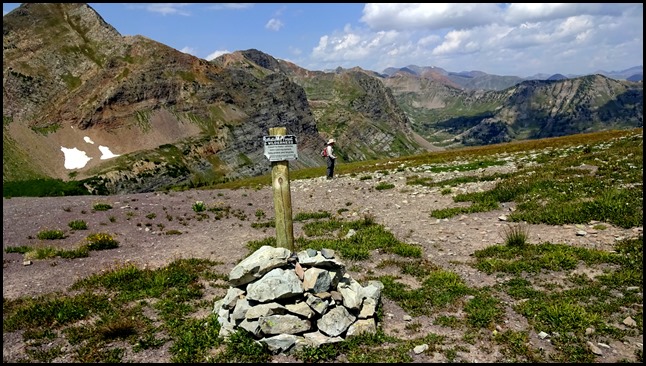 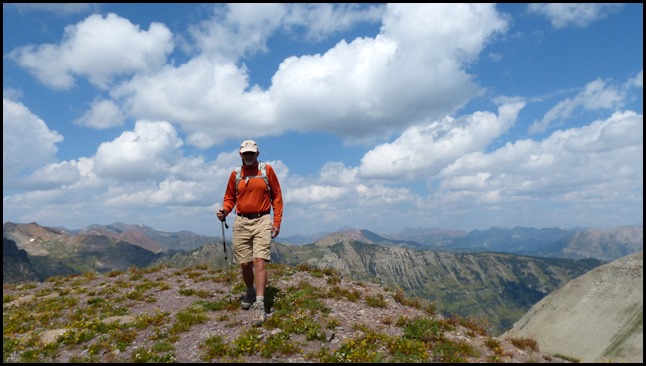 It is absolutely gorgeous up there. 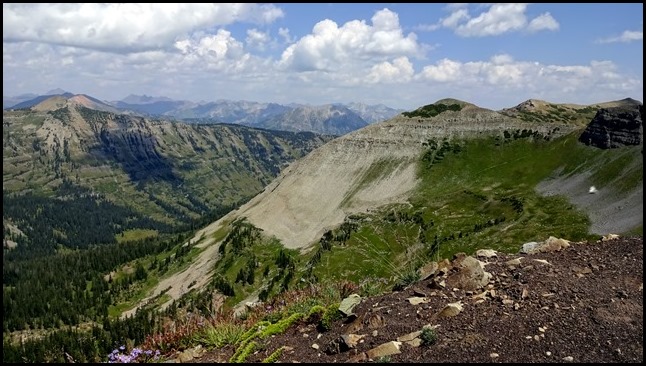 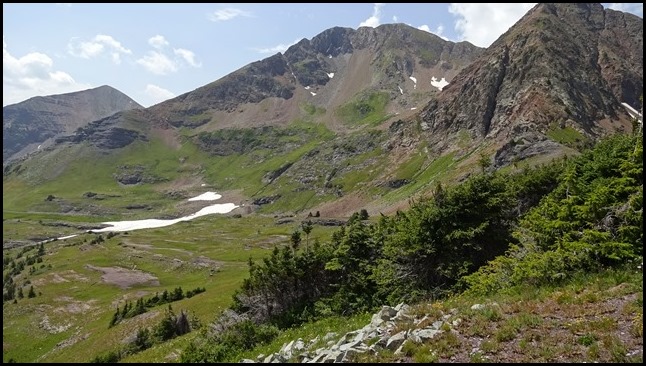 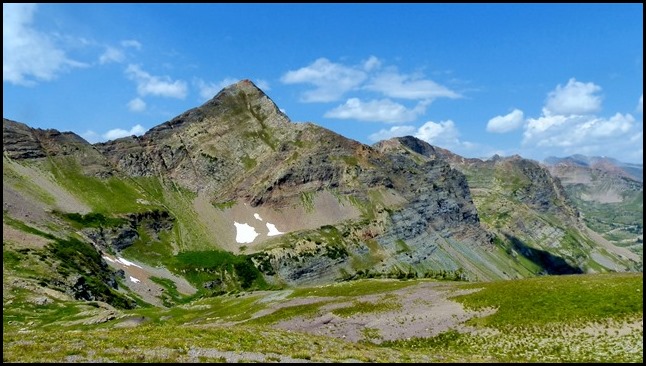 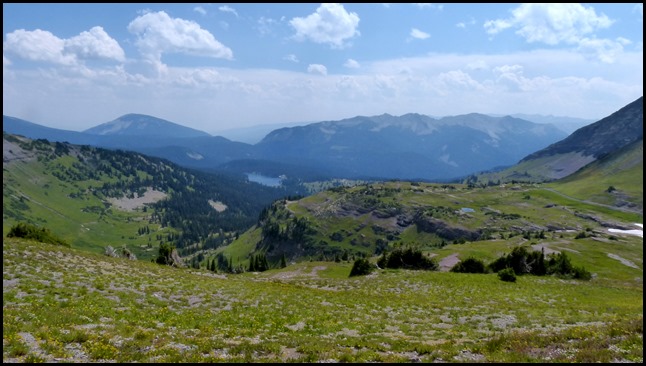 Chris and Jim were finishing their lunch while I went off to see if we could get over to the next higher ridge where we could see people. 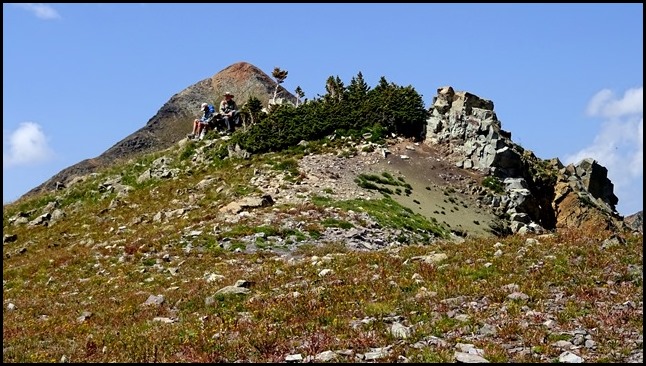 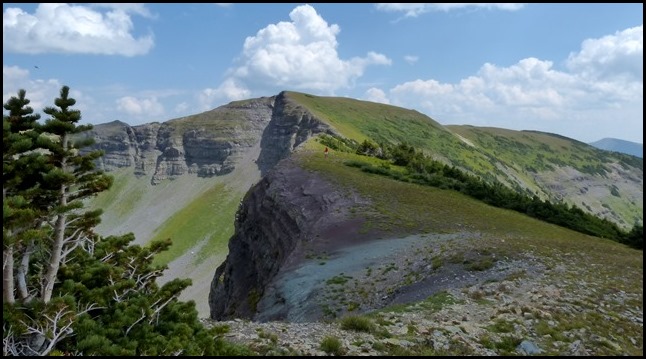 A Julie Andrews moment for sure. 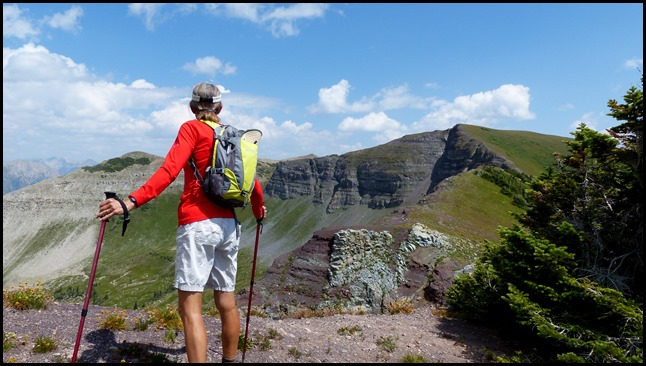 There was a sheer drop and no way to cross so we figured there must be a way to cut across at a lower level. Again, that would be for another day. 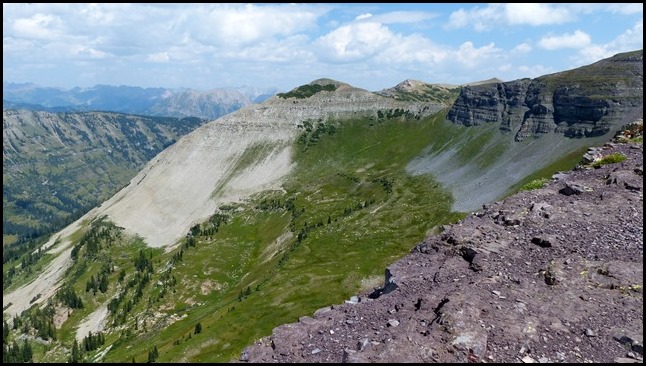 A dark cloud moved overhead so we thought it best to start back down. We actually managed to stay on the trail all the way back. We had light rain for the last mile but just as we got to the car the sky really let loose. 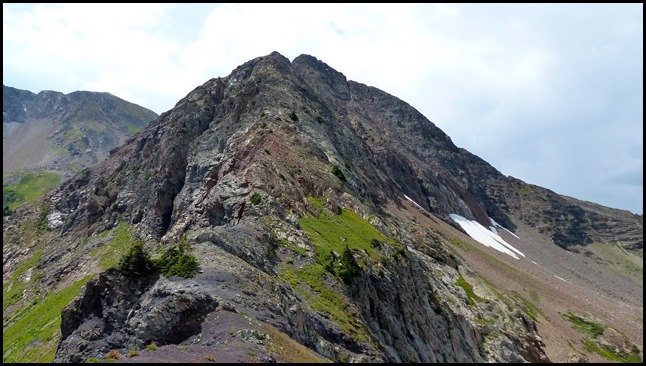 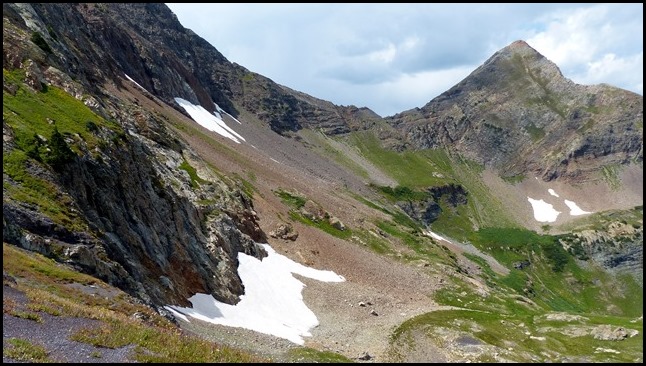 We hiked just under 7 miles with 1,400’ of elevation gain. If we ever go back I think I would want to try the shorter but steeper middle approach to Scarp Ridge. It’s a little more climbing but gets you up even higher, which is always a good thing.