First Week of the New Year 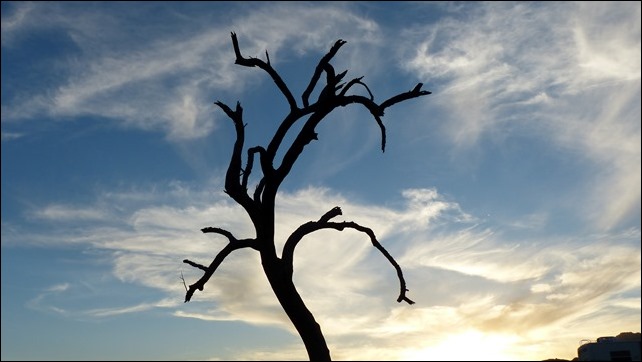 It was a lovely first weekend of the year, with blue skies and pleasant temperatures. On Saturday we went back to the Tom’s Thumb trail in the McDowell Sonoran Preserve with Steve and Mona Liza, along with throngs of other people who also wanted to start the year out with a hike. Unlike our hike there with Suzanne about a month ago, this time we made it to the Thumb. 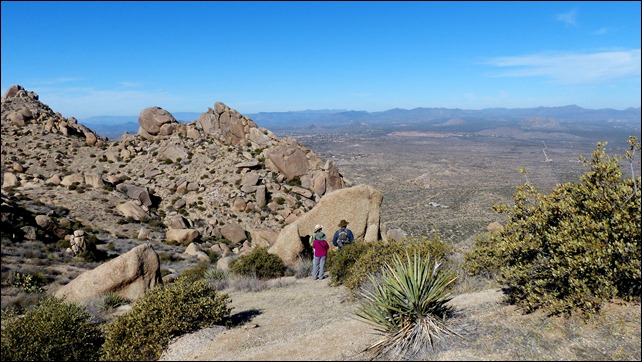 I took a picture of Jim and Mona Liza, while Steve was setting up the self-timer on their camera. 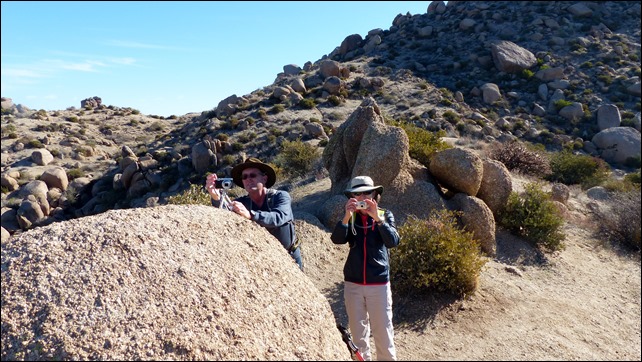 We somehow all managed to get out on the rock for a group photo. Maybe it will show up on their blog? 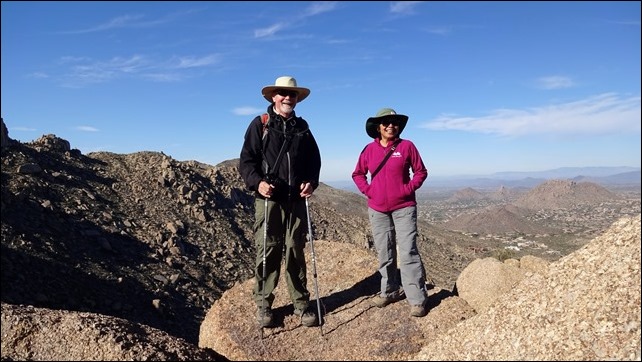 Our destination, Tom’s Thumb, is in the middle. Looks like Tom is giving us the finger on the left. 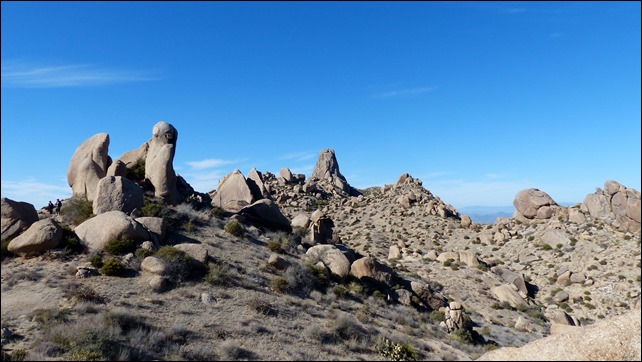 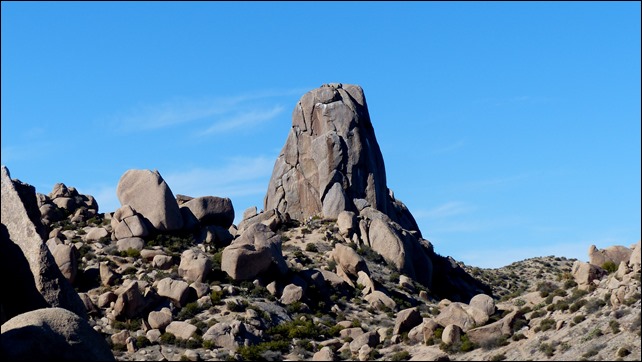 Approaching the 140’ Thumb. There was some rock scrambling and a couple of steep climbs to get there but it wasn’t too bad. 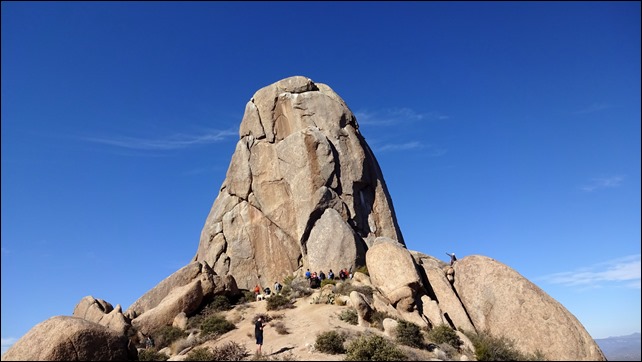 According to The Arizona Republic, “Scottsdale's Tom's Thumb, at an elevation of 3,925 feet, got its name not long after Tom Kreuser and two friends - Diana Hartrum and Bill Sewery - climbed the spire on Sept.19, 1964, according to Kreuser's climbing journal. At that time, only about 30 people had climbed Tom's Thumb. They referred to it as the Thumb, the Plug or the Dork, Kreuser said.

Shortly thereafter, he reported his climbing route to the Arizona Mountaineering Club, which was formed in 1963. Club President Doug Black dubbed the spire Tom's Thumb as Kreuser was the first club member to climb it and report his route to the group.” 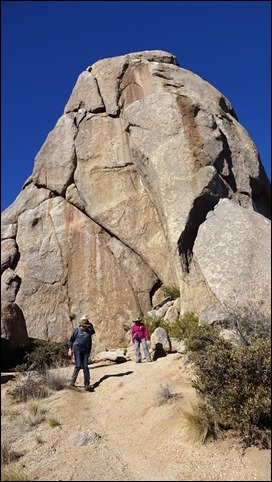 No climbing to the top for us, but we did make it to the base. 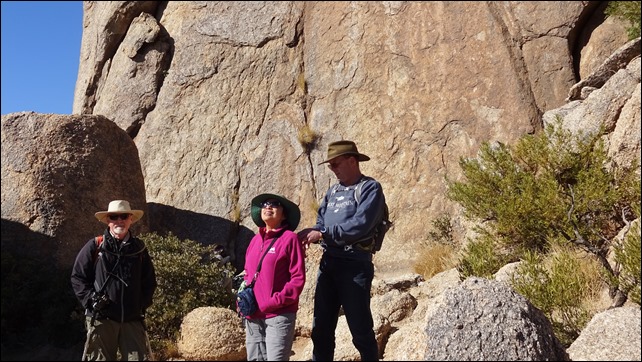 We just love all the huge granite boulders in this area. 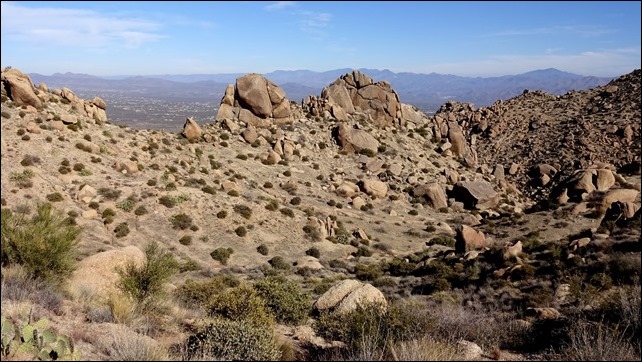 We saw two crazy guys on mountain bikes. Not only is the trail very steep and rocky in places, there were so many hikers to manuever around it would not have been a fun ride. We saw them pushing their bikes quite a bit, and one of them took a pretty good fall. 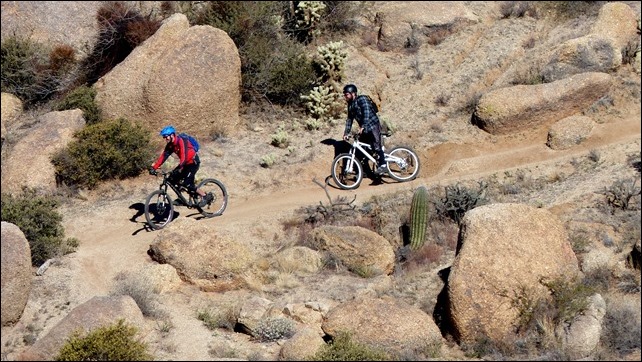 We hiked about four and a half miles with 1,100’ of climbing, a very good day! Jim managed to rebuild the rear shock on his bike with only a few snags, which he figured out with a little help from one of the camp hosts. We’ve ridden twice since he did it and it held air, so he must have done something right!

This coyote showed up in the same spot Jim and Sophie had been walking just a few minutes earlier. Probably smelled a little cat and thought it might get a treat. 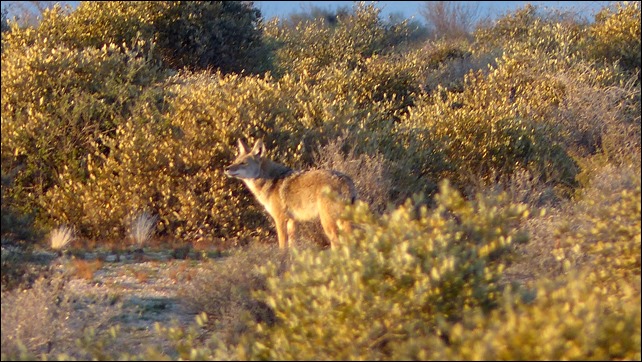 As did the rest of the southwest, we had cold temperatures and rain off and on all week so we took the time to do some indoor chores. Jim installed a new converter in the Lazy Daze, as our old one was malfunctioning. It took several phone calls to AM Solar and Progressive Dynamics before he was able to diagnose that the converter was the problem and not the solar charger. He had replaced the original one with a three stage converter back in 2009, so it was a pretty easy job to disconnect the old one and rewire the new. He came away with only a minor electric shock, seconds after I asked him if he had turned off the power. The answer was clear when he leaped back and the screwdriver went flying across the floor! Luckily no harm done.

I sewed a new Protect-A-Tow with some sun shade fabric I bought from Ebay. Our other one had holes in it from being dragged on the ground occasionally and chewed on by rodents in Colorado last summer so it was time. And finally after seven years Jim finished scanning all of our papers, receipts and tax records that we have been carrying around and adding to over the years, while I cleaned out some more cabinets. It’s never-ending, but we made some good progress.

I also got to experience a wash full of rushing water on the way home from Fearless Kitty Thursday. It was raining hard and I was concerned about getting back as there are several dips in the road with signs stating “Do not cross when flooded”. When I got to the third one there were several cars stopped in both directions and no one crossing through the water. A few people turned around and I pulled over to the side to call Jim and tell him I was going to hang out in Fountain Hills for awhile until the water receeded. Just then a small sedan came up and went around all the stopped vehicles and just plowed on through the water. Of course everyone else followed after watching him make it. I must admit it did make me a little nervous, and I was hoping I would not be one of those people who had to be rescued, (and embarrased), by being so stupid.

Arizona’s Four Peaks, after the storm. The 10 day forecast looks much better. 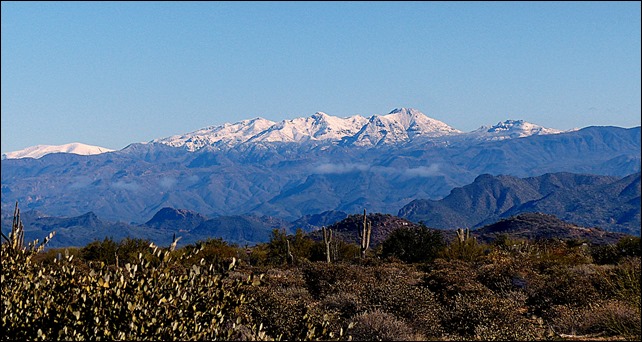 We are down to our last week here at McDowell Mountain, and I think we’ve finally come up with a tentative plan for the year, but more on that later. We will definitely be in Quartzsite and hope to meet up with some of you at the Bloggerfest on the 23rd. 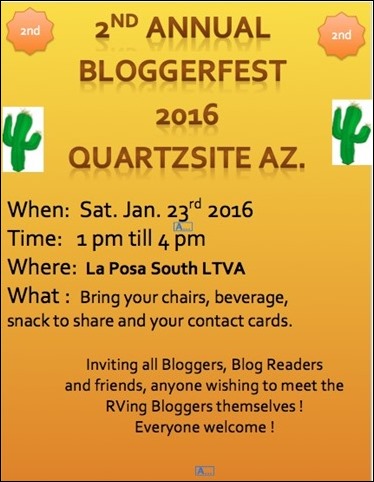