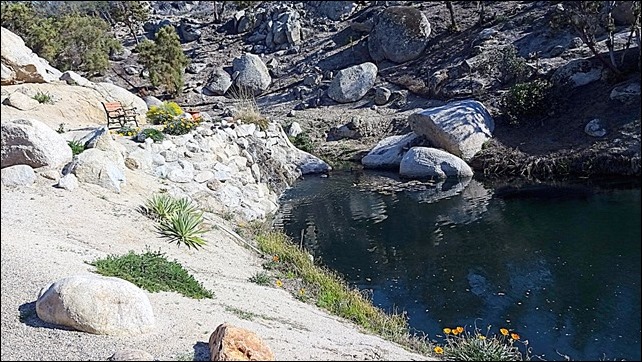 With temperatures still in the mid-eighties the pool at Jojoba Hills was a great place to cool down after a hike or workout in the fitness room. 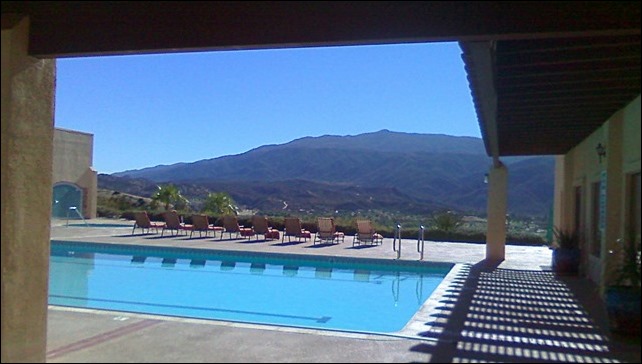 One day we did a hike near Anza, CA attempting to get up on Cahuilla Mountain. The last couple miles of dirt road to the trail head were pretty rough, but Jim managed to get our Subaru there without incident. Bobbie’s second cousin who lives in Murietta also joined us. After about 2.5 miles we thought we missed a turn-off as the trail began to descend away from what we assumed was Cahuilla Peak, so we turned around. We found out after the fact that we were looking at the wrong peak. Guess that’s one we’ll have to try again some day.

The sign for the trail was not much help. 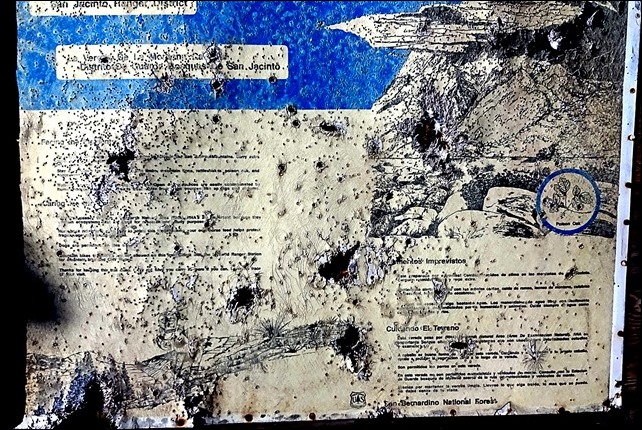 Mark and Bobbie with Lauren. 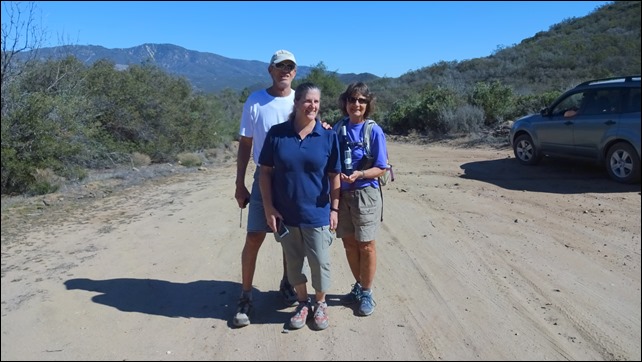 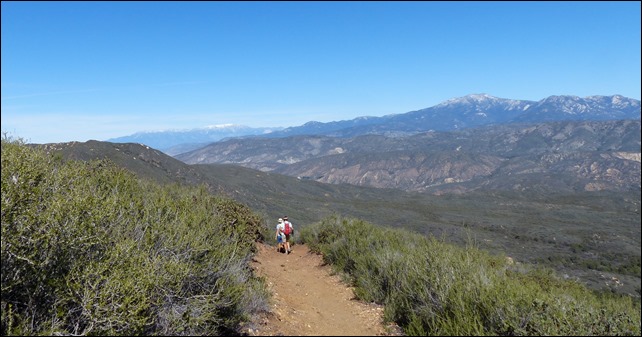 We weren’t sure what mountains we were looking at but they had quite a bit of snow. 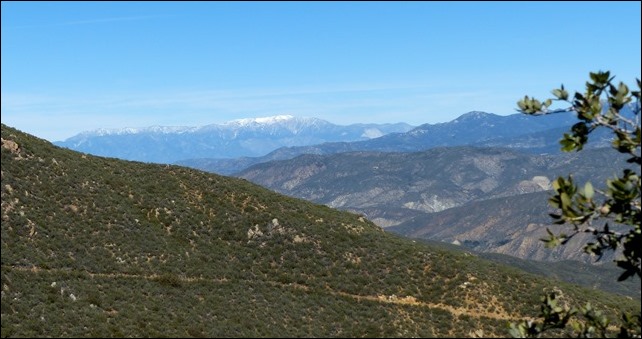 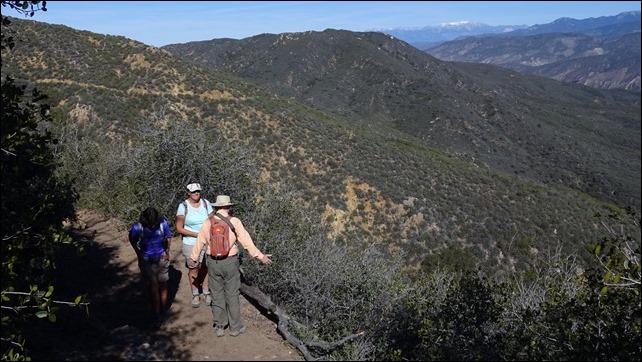 Bobbie’s big find for the day was a giant pine cone. 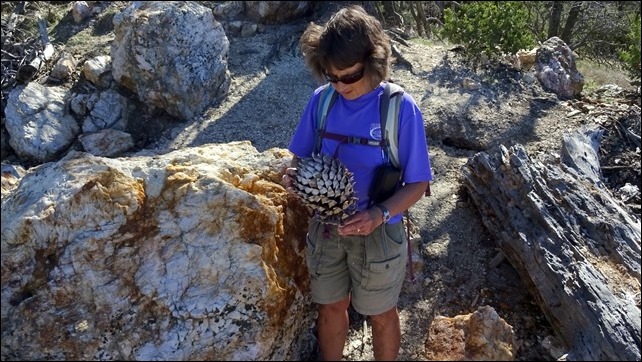 That evening we all met Terry and LuAnn (Paint Your Landscape) at Karl Strauss Brewery in Temecula for happy hour. Last year Karl Strauss was one of our favorite breweries, and it still is. Besides excellent beer and good food they have the best happy hour prices we’ve seen anywhere.

The next day Terry and Luann invited us to play pickle ball. Jim and I had tried it by ourselves once but playing doubles was better, and easier on the joints not having to do as much running and hitting. If we lived there we could see playing regularly. It is really a fun game.

On Valentine’s Day, Sunday, Mark and Bobbie decided to leave Goldie and get a room in San Diego for a couple nights to escape the heat. We had a water leak from the faucet for our filtered water, so Jim made a trip to Home Depot in Temecula to get a replacement. Since I would rather not be there while he’s doing home repairs, Suzanne and I went a few miles down the highway to Dripping Springs campground where there are two trails. The Dripping Springs trail and Wild Horse trail make a 20 mile loop. We took the Wild Horse for 4 miles before turning back. It’s a nice gradual climb with a good amount of shade. 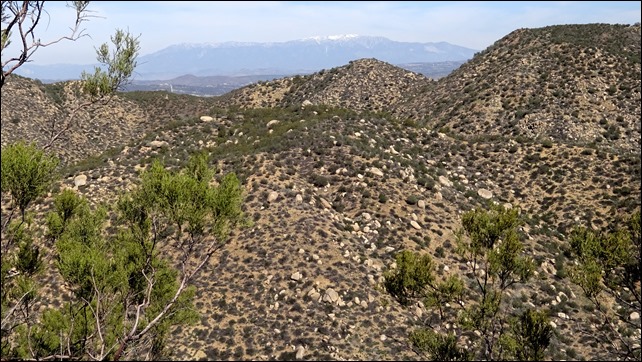 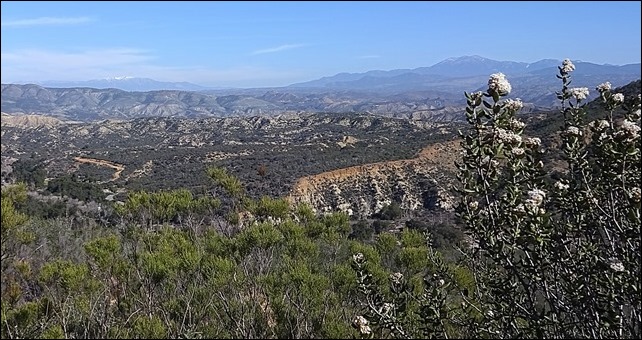 That evening Judy (Travels With Emma) came over for happy hour along with Suzanne. Judy told some funny stories about things that go on in the park, and she seems to be pretty happy there.

I forgot to mention that on Thursday of last week our 3 month old Surface 3 computer “shit the bed”  in Jim’s words. It turns on but the screen flickers and we are unable to log on so Jim spent countless hours on the phone with Microsoft tech support. All the restarts and resets they had him do made no difference, so they finally decided to send a new one, which was supposed to be shipped to Jojoba Hills. This was Thursday morning, and as of Monday we had yet to receive a tracking number, which we were told we would receive in 24-48 hours. More useless phone calls to India and a very unhappy Jim, so since the computer was not even on its way yet we decided to join Suzanne, who was also heading to San Diego, only about 70 miles away. We’re back at Mission Bay RV Resort where we spent a month last spring. They honor Passport America Monday-Thursday so it’s only $30/night rather than the normal $60.

And we even have a little bay view through the chain link fence out our living room. 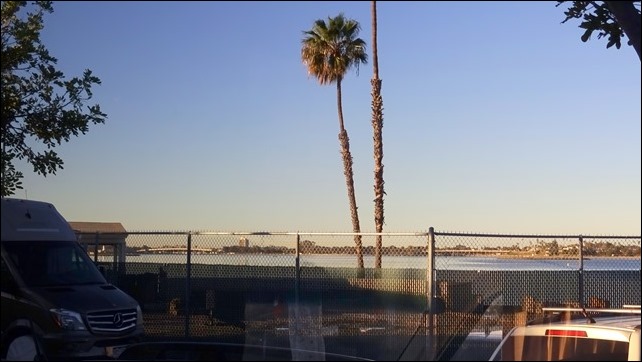 Hans and Lisa (Metamorphosis Road) just got there the day before so we all went to Ocean Beach yesterday afternoon where we met up with Mark and Bobbie for a stroll on the pier, then a pizza and beer at Pizza Port, one of our favorite places from last year. The pizza was excellent and I think we all found some really good beers.

80 degrees and a holiday, so the beach was packed, even late in the afternoon. 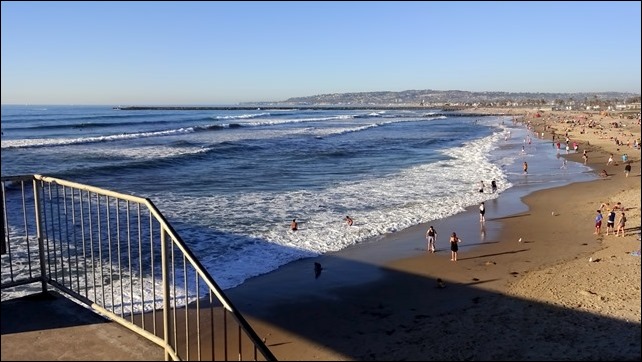 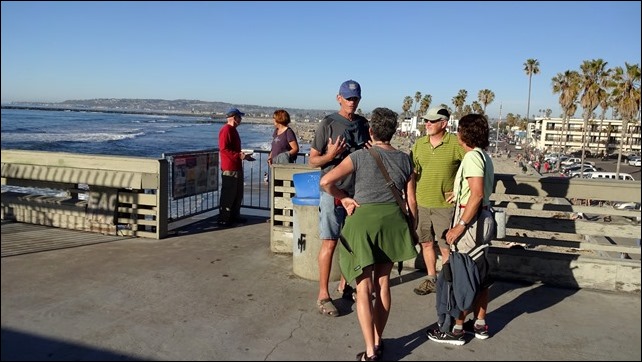 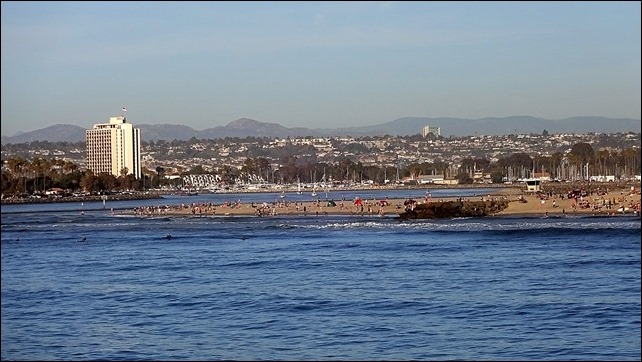 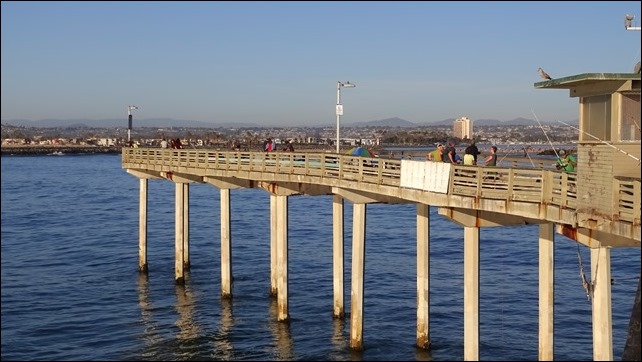 Today Suzanne joined us for a 16 mile bike ride around Mission Bay. We just had to stop at Draft on Pacific Beach for a bite to eat, and what else, a draft. The weather is great, record breaking heat for San Diego, but just right for us. While out on our ride we got an email from Microsoft saying our case was closed, so when we got back Jim spent almost two hours on an online chat trying to figure out what is going on. From what he could understand the new computer still hasn’t been shipped, so he asked if they could just cancel the order and let us go to the Microsoft Store in San Diego to pick up a new one. They are still working on it and are supposed to get back to us today or tomorrow morning. Guess we’ll decide in the morning whether to head back to Jojoba or spend another day here. Looks like one more nice day before a drop in temperature and chance of rain.