Step Back in Time to Bodie, CA

It’s hard to imagine what life must have been like in the late 1800s in a California gold boomtown, but we decided to check out Bodie to get a little taste. 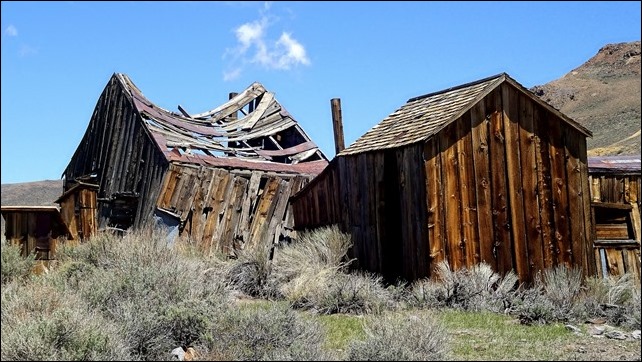 To reach Bodie from Lee Vining we had to drive about 20 miles north on Hwy 395, crossing the 8,100’ Conway Summit. It was such a lovely day we stopped to look at the view and take a few pictures. Bumper stickers of all kinds have been plastered on the guardrails.

Thought this was cute. 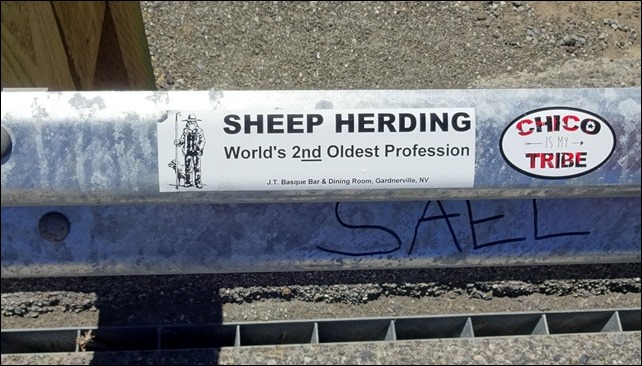 But then I found my favorite. As a Pennsylvania girl who moved to the Gulf Coast of Florida and never acquired a taste for oysters, I can tell you this is so true!

View of Mono Lake from the summit. 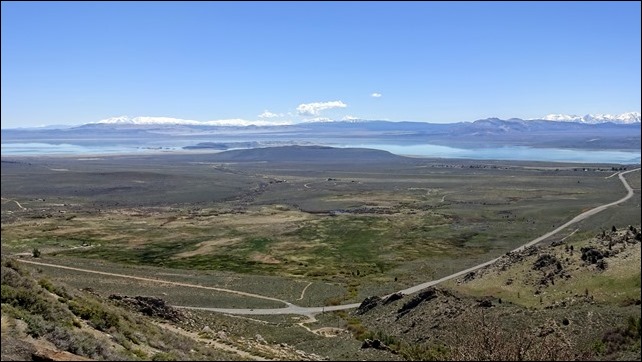 Now on to Bodie, another 13 miles east of 395, with the last three miles being a fairly good dirt road. After the big gold rush on the western side of the Sierra Nevada, prospectors began looking on the eastern side. Bodie became a boomtown by 1879 with a population of 8,500, over 2,000 buildings, 450 businesses including at least 60 saloons, a Chinatown, and a red light district. 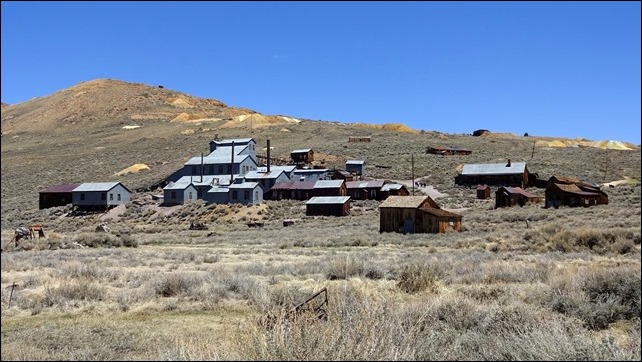 Bodie had a reputation for lawlessness with reports of daily stagecoach holdups, shootouts, and saloon brawls. 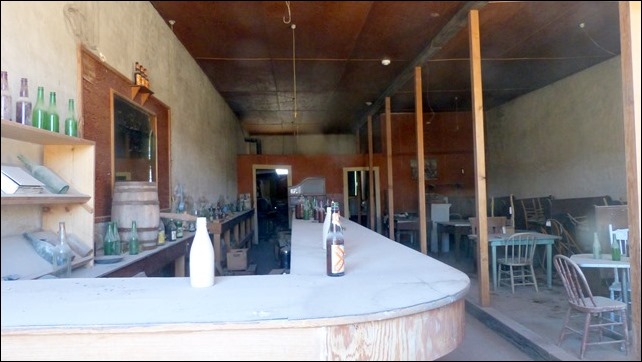 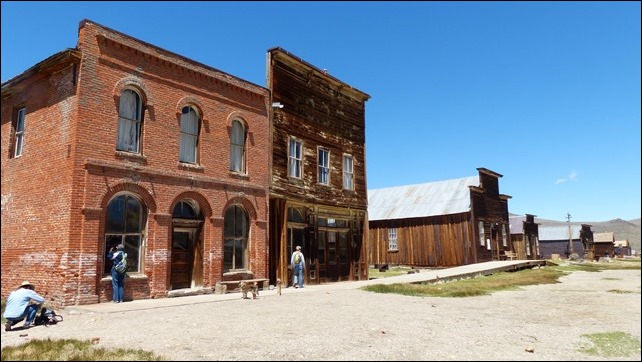 Bodie had a short revival in the early 1890s with the invention of the cyanide process to recover gold and silver from discarded mill tailings and from low-grade ore bodies that had been passed over. Also electricity was brought in, a much cheaper and easier way to run the mines than wood power. A fire in 1892 destroyed much of the business district.

The gray buildings are the Standard Mine and Mill, which yielded around $25 million dollars in gold. This part is off-limits, except for guided tours during the summer. 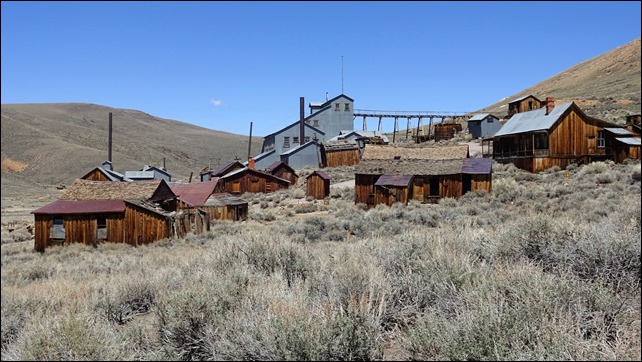 In 1932 another fire destroyed 95% of the town, and to preserve what remained the state of California acquired the property in 1962 when it was designated as a National Historic Site and a State Historic Park. The state charges a $5 admission fee.

Some of the houses have been renovated and are lived in by park personnel. There was “ranger residence” sign on this one, and someone from the CA state park system actually lives in Bodie year-round, with more joining them in the busier summer months. 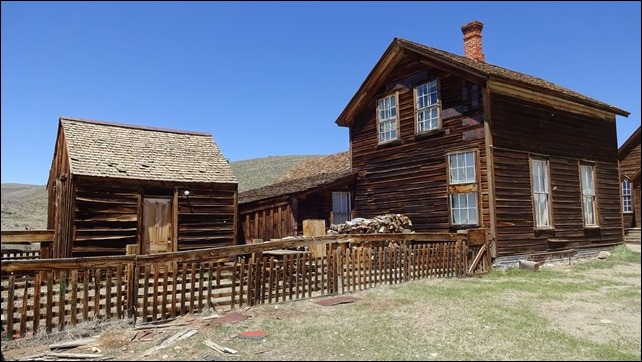 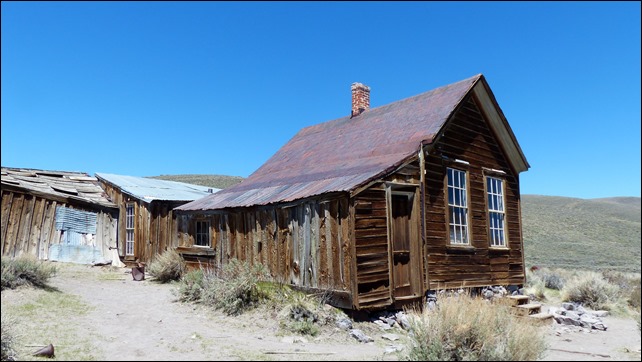 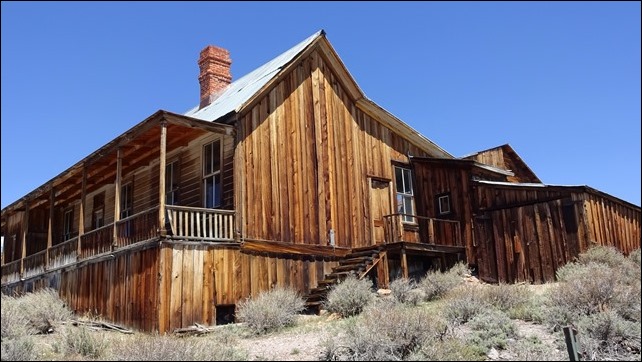 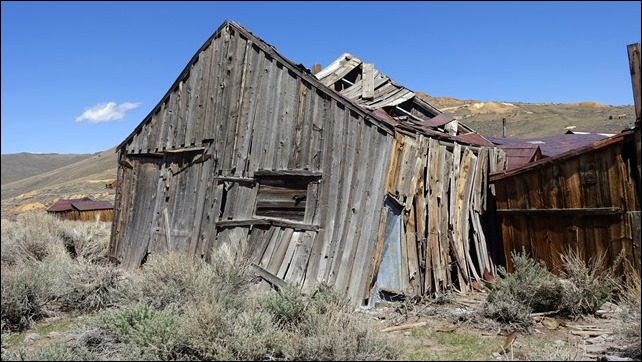 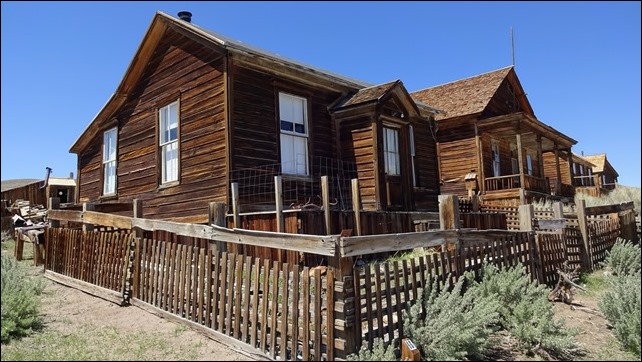 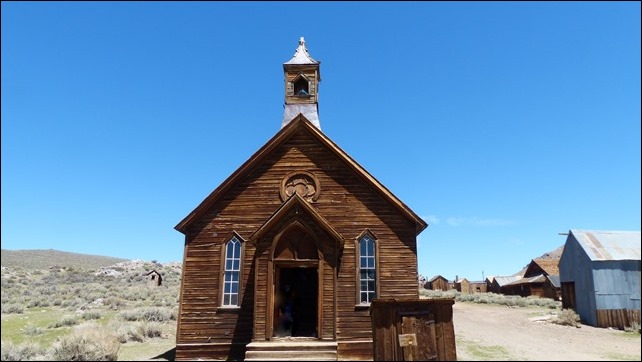 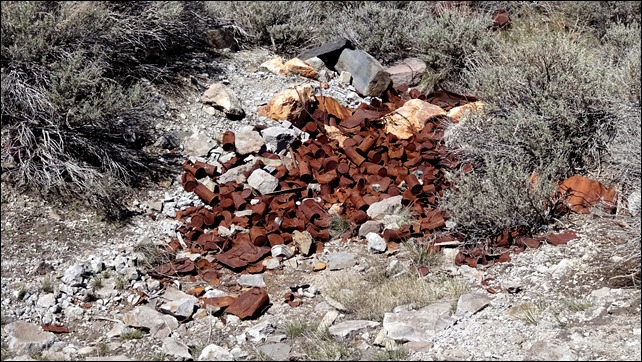 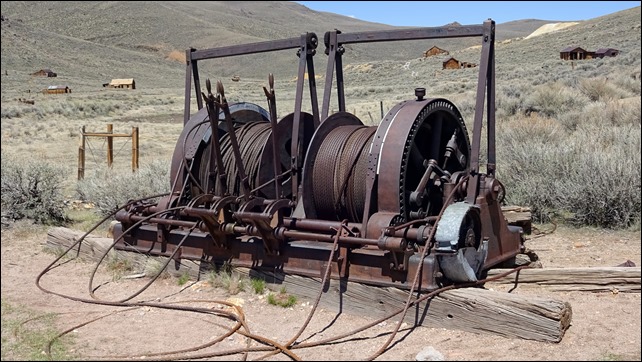 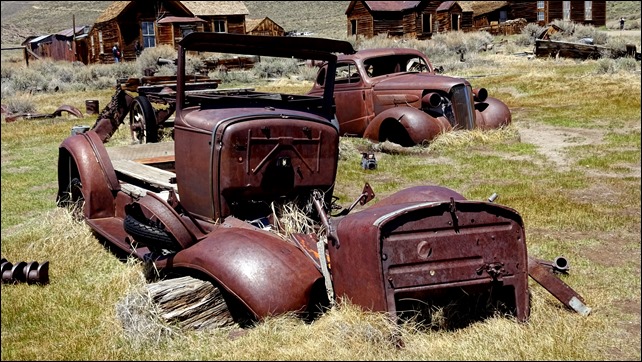 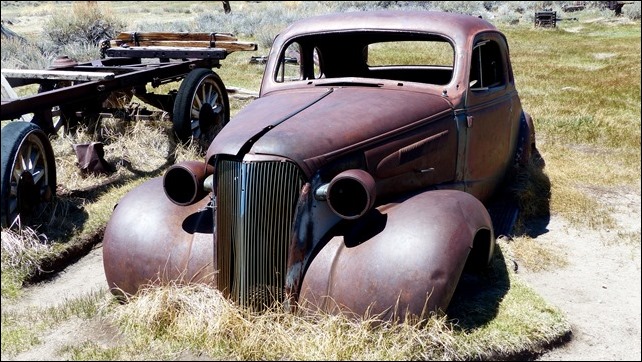 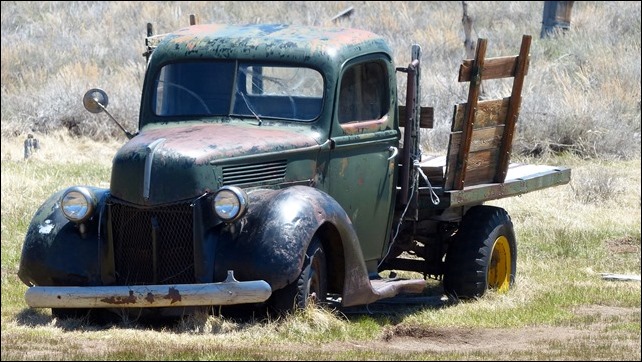 The buildings are not open but we peeked in a lot of windows. 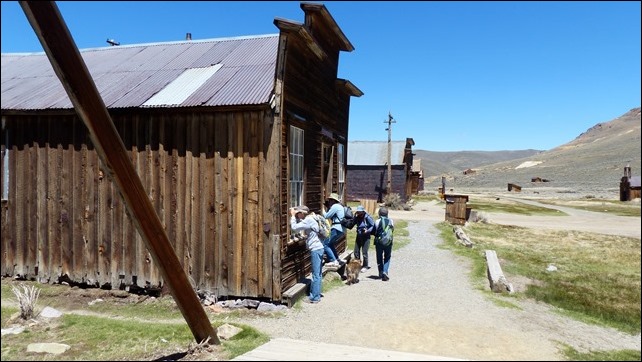 A look inside the mortuary. 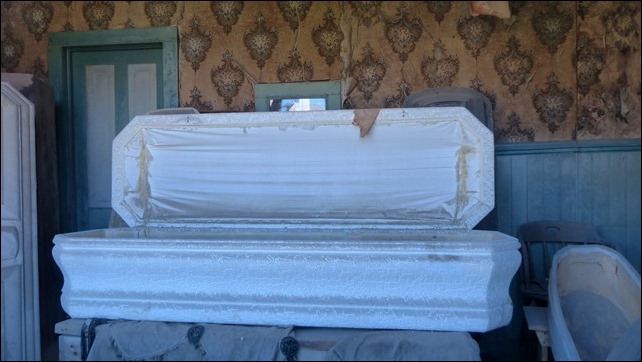 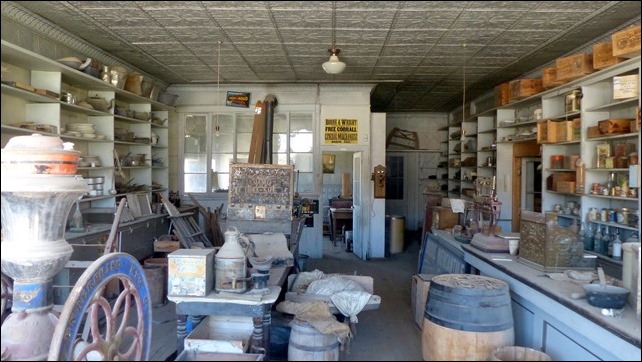 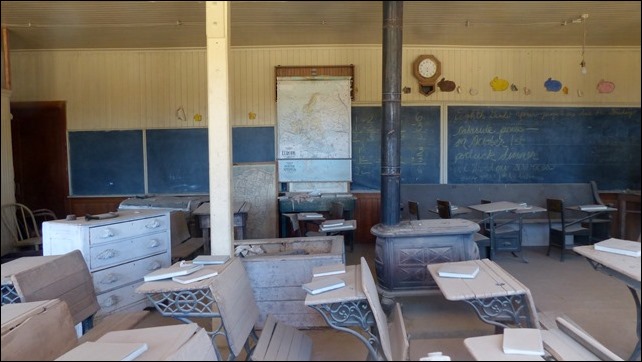 Living room of one of the houses. 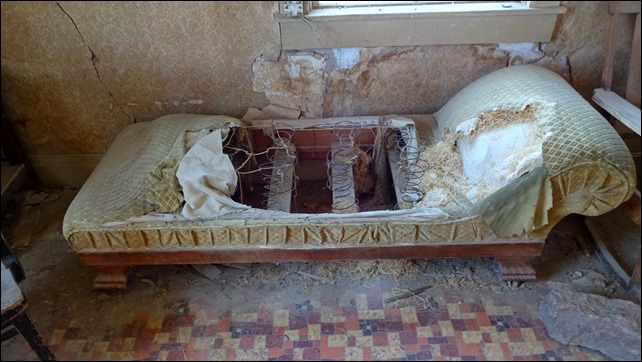 The state is keeping Bodie in a state of “arrested decay”, meaning they don’t actually restore the structures but try to stabilize them so they will remain as they are. You can see how these two buildings are being propped up. 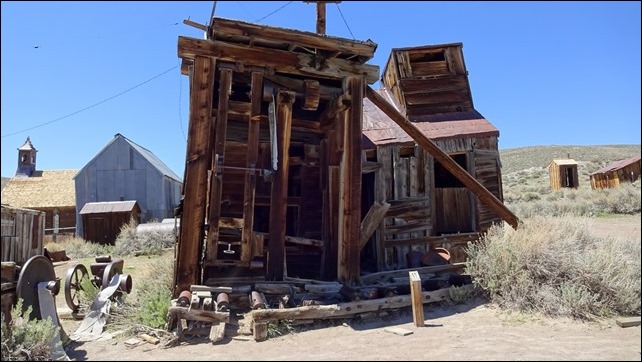 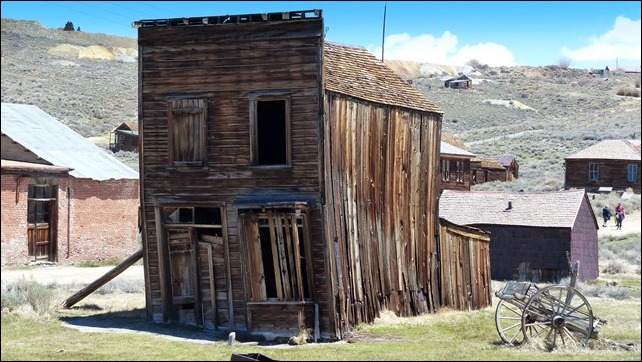 It was a cool and breezy but sunny day when we visited. What surprised us were the number of biting gnats that swarmed our faces. I had some Deep Woods Off and we all used it but they were relentless. We spent over a couple hours walking around and taking photos. Our plan was to have a picnic lunch and wander around some more. After eating in the car we decided we’d had enough and headed off to scope out the bug situation for our planned hike in Lundy Canyon the following day. Happily the trail was bug-free so we didn’t have to change our plans.

A little preview of the next post. I recovered from my illness and Jim didn’t get it so all is good. 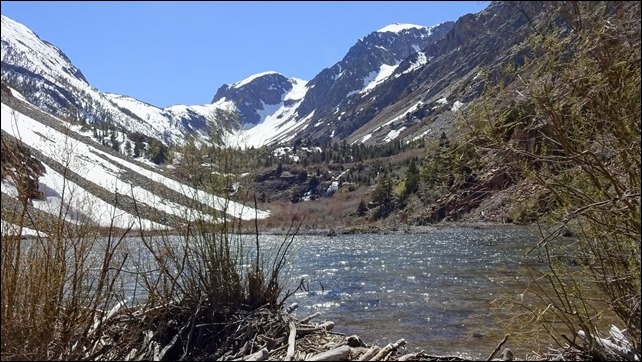