We arrived in Redding, CA late Sunday afternoon and settled in at the gated yard of All Wheel Auto, Truck and RV Repair for our appointment on Monday morning. We made the appointment for the Lazy Daze to get new shocks, repack the wheel bearings, replace hoses, inspect the steering components, u-joints, brakes, etc. Also our not quite five year old tires have some uneven wear and sidewall cracks that we were concerned about.

Our tight site. The first night another Lazy Daze was parked there. Turns out we know the owner, Sarah, who was having some things checked out on her way to Washington. 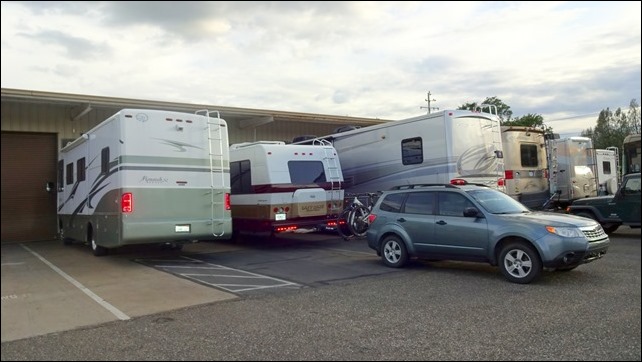 Being close to I-5 and in an industrial area there was nowhere to go for a walk that evening, so we drove north about eight miles to Shasta Dam. Shasta is the third largest of the controversial dam projects built by the Bureau of Reclamation, with only Hoover and Grand Coulee being larger. 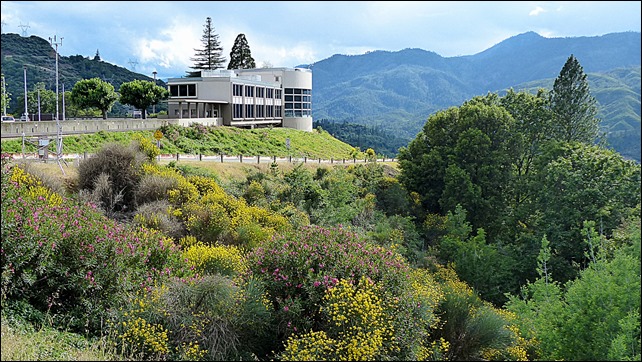 Shasta Dam, almost 7/10 of a mile across. You can drive, walk or bike across, but have to pass through security if you are driving. 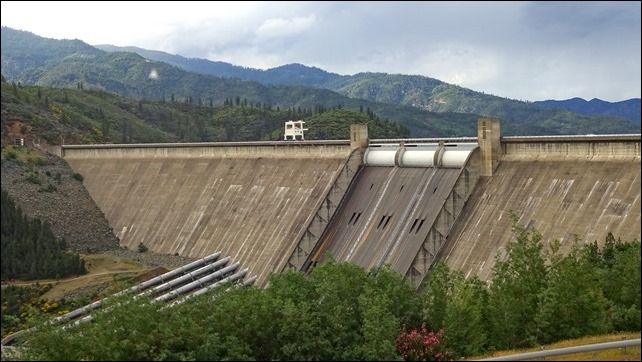 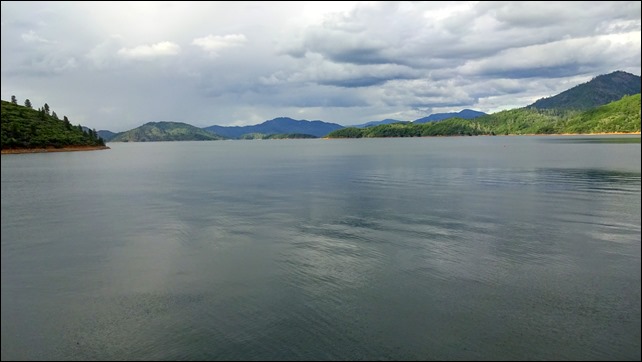 Sacramento River on the other side of the dam. 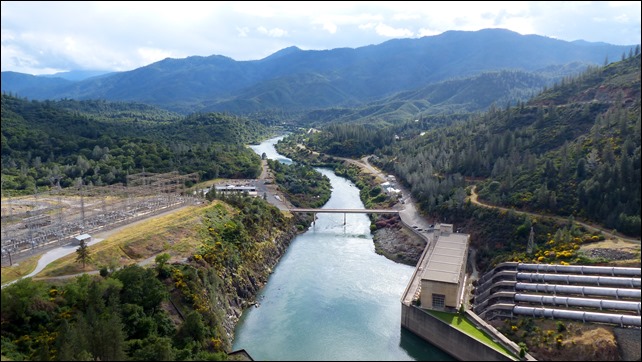 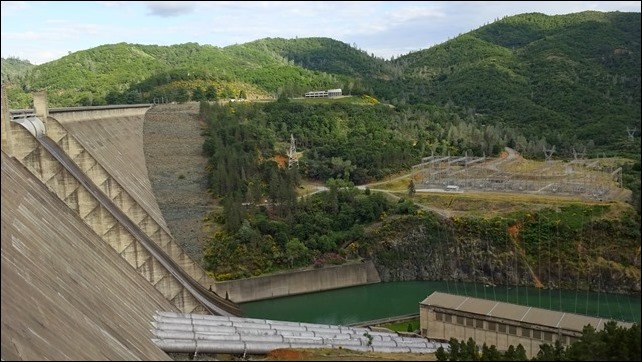 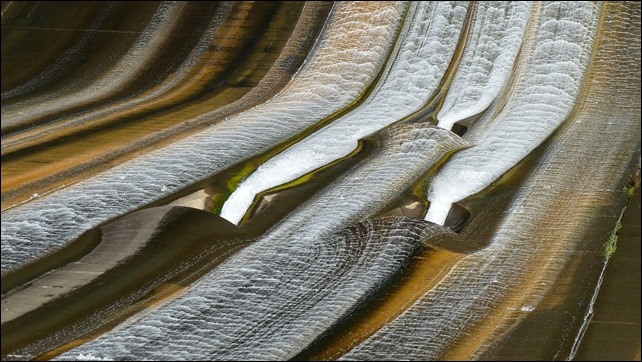 Yesterday they started work on the Lazy Daze about 8:30, and finished up at 4:30. The tire cracks were worse than we thought, so they contacted Michelin, filled out the appropriate forms and documentation, and received notice back that Michelin would give us 56% off on new tires. Since they didn’t have them in stock, they were ordered and should be here by noon today. So this is how we lived last night, on jacks with no wheels. Wish we had this much ground clearance with the tires on.

Unknown to us, our dually extra long valve stems were both damaged due to improper installation when we got new tires back in 2011, and nothing similar was available here in Redding, so Jim called Borg and had them overnight new stems. They should be here by noon, too, and we are hoping to get all this finished sometime this afternoon. Also the front brake pads are quite worn so they are getting replaced. This has turned out to be our most expensive “free” campsite ever.

Last evening we went downtown to check out the Sundial Bridge and walk along the Sacramento River Trail. Designed by Spanish architect and engineer Santiago Calatrava, it’s a very impressive structure. It is actually a working sundial, but only between 11 am to 3 pm. You can read more about it here if interested. 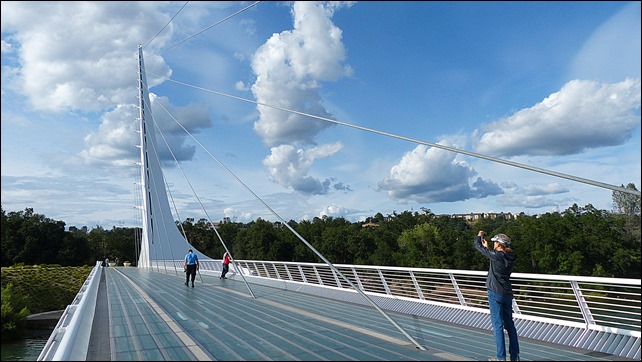 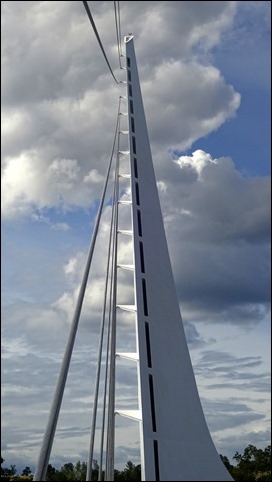 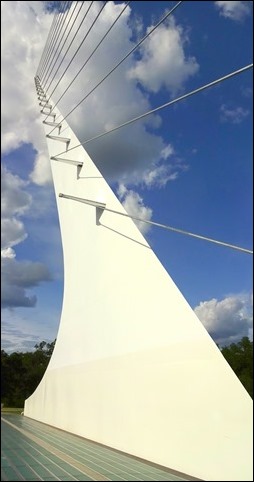 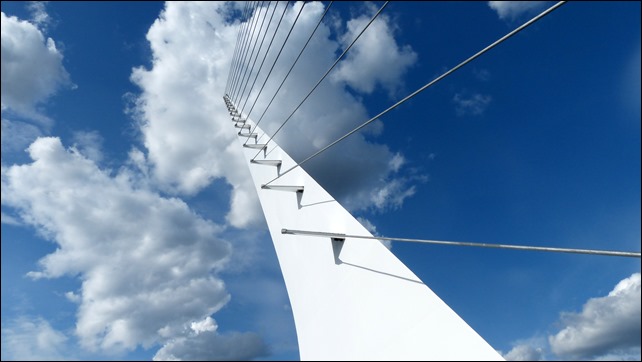 It reminded us of a harp. 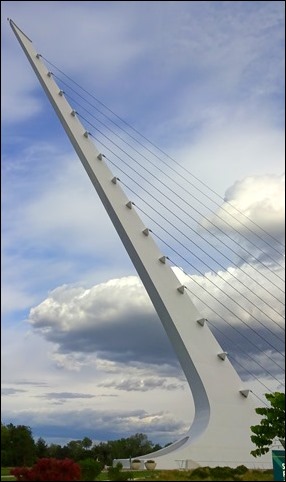 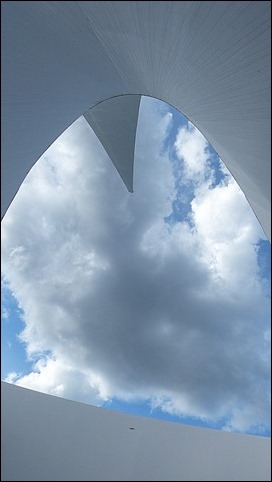 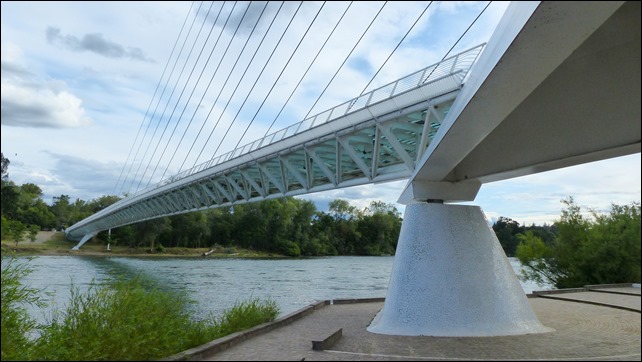 Views of the Sacramento River from the trail. 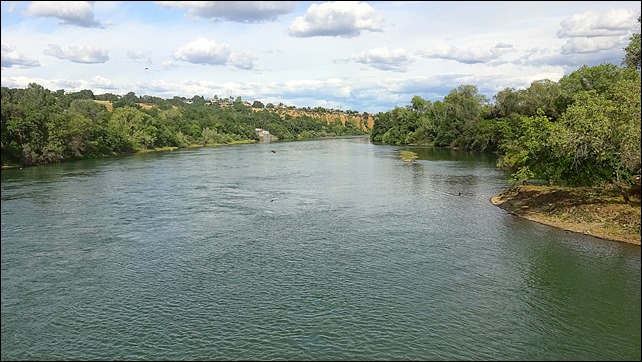 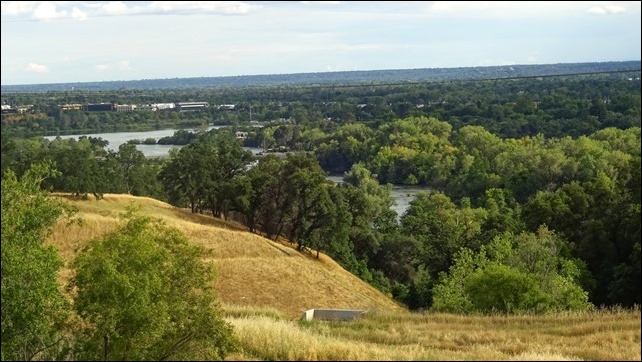 And we saw two deer, lots of ducks, 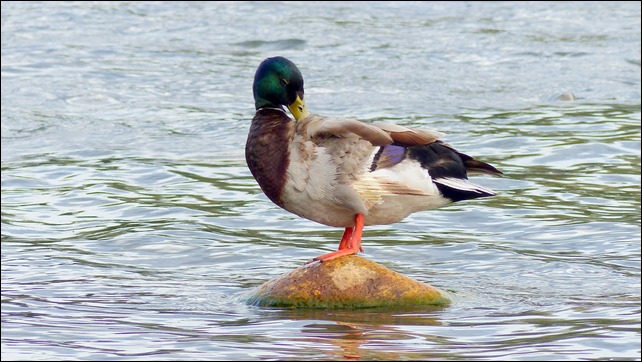 and this unexpected guy who walked out onto the trail in front of us. Skunks are something we don’t see very often. 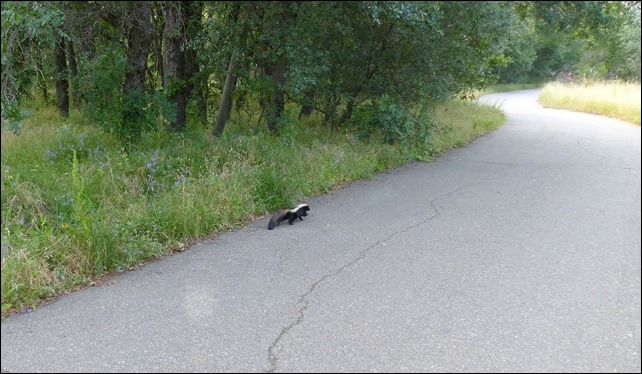 If we get “released” today we hope to spend another couple nights in Redding so we can actually get out and ride our bikes and see a bit more of the town and trail. And we still need to figure out where we’re going for the upcoming Memorial Day weekend, as we have no reservations.