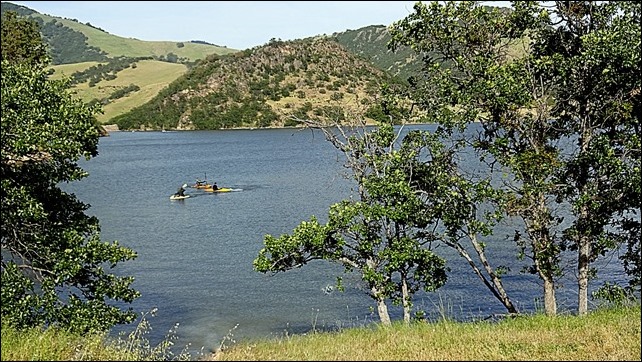 We are spending a week here in lovely Ashland, Oregon, our first time in the area. There are not many options for places to camp, other than a few RV parks, but luckily Jackson County has numerous parks and campgrounds, with Emigrant Lake being just 6 miles from downtown Ashland. We’re staying in the full hookup Point RV Campground, a really nice location, and just about all of the sites have great views of the lake. 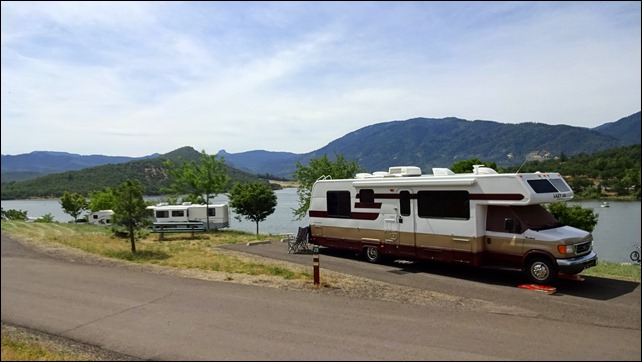 The RV campground from across the lake.

These cute coyote pups showed up in the campground the other night with no mother in sight. We later heard that wildlife rescue picked one up by the boat ramp because someone reported it as a baby fox. Not sure what happened to the other. We were hoping they just wandered away from mom and they were reunited, but don’t think there was a happy ending. 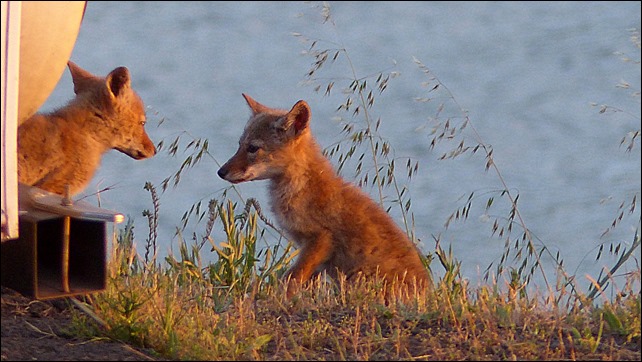 Although we have not met, I remembered that Raven and Chickadee Eric and Laurel are from Ashland, so I contacted Laurel for some advise on things to see and do. She emailed back with a nice list, which we are working our way through. One day we took a walk in Lithia Park, adjacent to downtown. 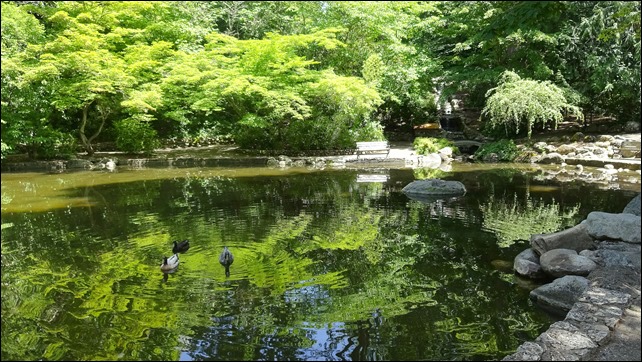 What a beautiful trail that runs right along the creek. 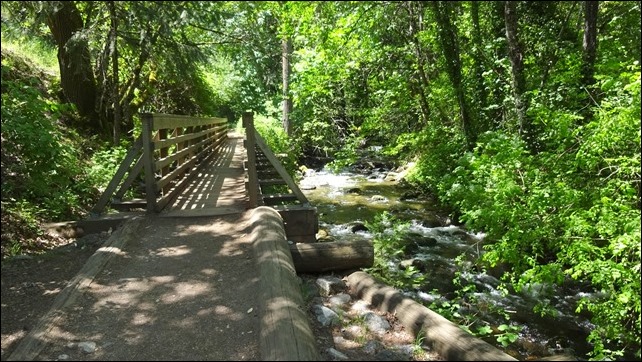 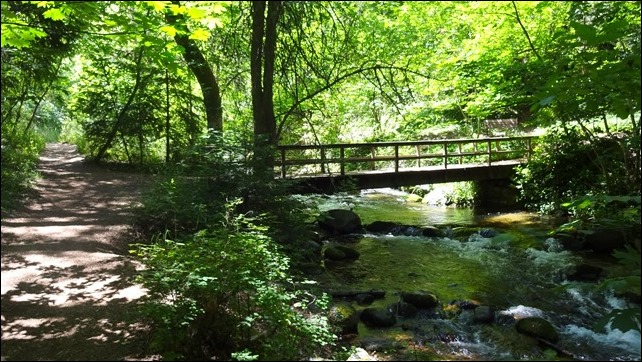 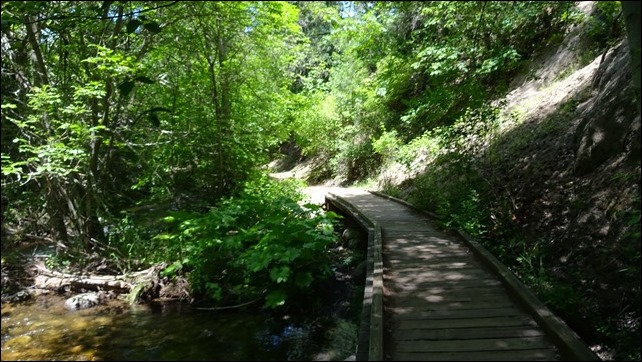 While we were there we saw people just leaving the tennis courts with pickleball paddles, so we talked with them about what days they play, and joined them yesterday morning for a couple hours. Even though we hadn’t played in almost six weeks, it all came back to us and we did better than expected. It is such a fun sport, and the group made us feel very welcome in joining in. We’ll go back for more on Monday morning.

After our walk we wandered the streets of downtown where Jim bought a new hat, then we had lunch at Louie’s, a nice restaurant with pleasant outdoor seating along the creek.

The extreme heat in the west has not missed Oregon, so temperatures are 10-20 degrees above average this week, which means mid to upper 90s. Luckily you don’t have to drive too far from Ashland to get up into the mountains, where we hiked to Grizzly Peak, at 5,922’.

Jim wearing his new hat that he bought the day before. The old one went in the dumpster. 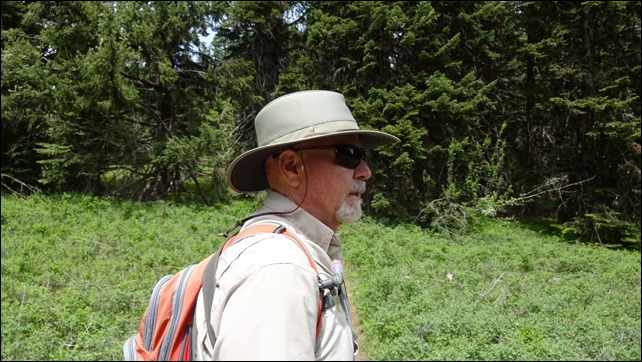 We headed 1.2 miles up the trail which then intersects the 3 mile loop trail. We went counterclockwise to the summit, then continued around the loop. 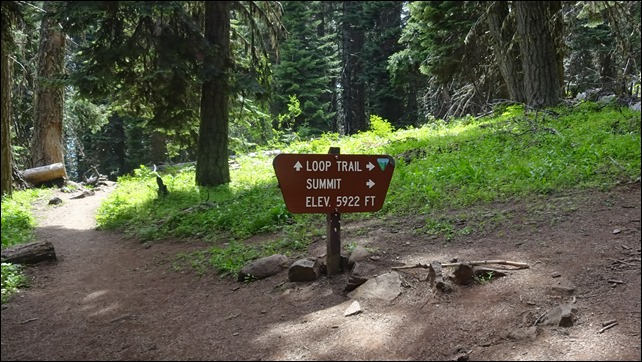 Here I am taking a photo of the view from the top of Grizzly Peak. 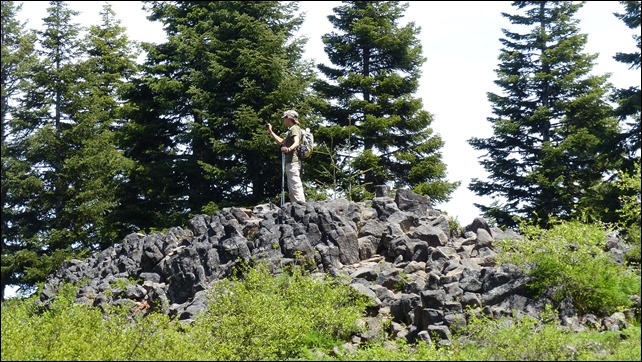 This is it, not much to see, but the better views come later in the loop. 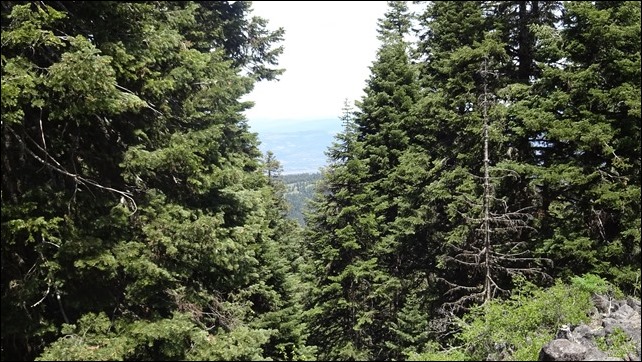 Unfortunately it was so hazy from the heat the views left a bit to be desired. Still a nice moderate 5.2 mile hike, with temperatures only in the upper 60s, which made it really pleasant. Part of the trail goes through a burned area from a fire back in 2002. 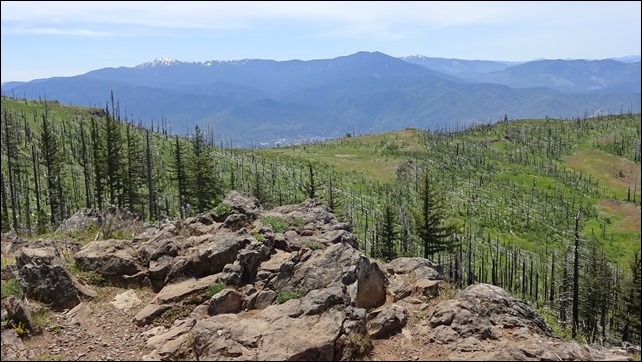 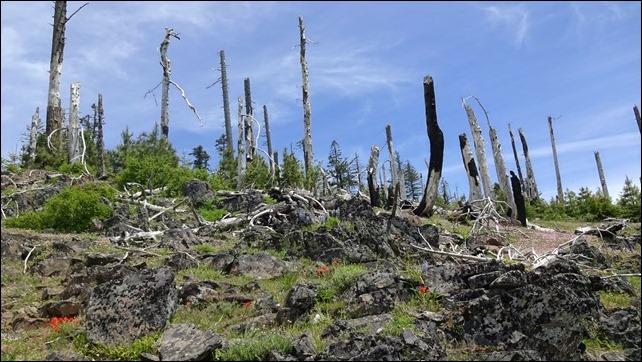 Mt. Shasta and Emigrant Lake through the haze. 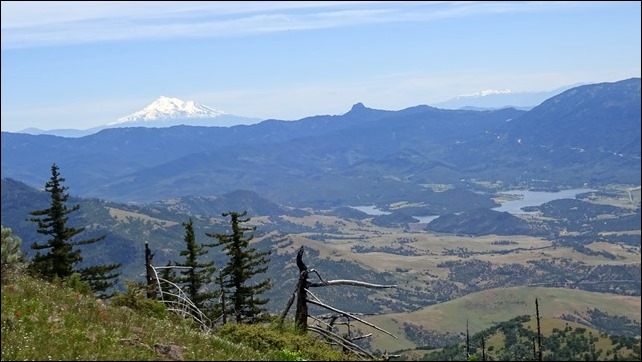 Quite a few wildflowers were blooming, but it was a bit early for others. Trillium at the top, not sure about the other two. 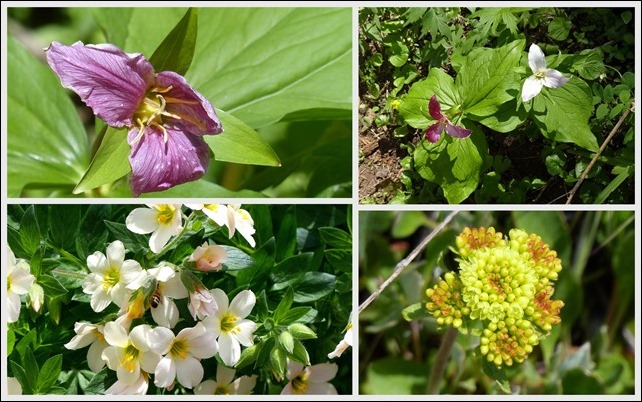 We’ve gone to town several times, last night for the First Friday Art Walk, where shops and galleries stay open late and have live music and refreshments. It was hot but there were quite a few people and we saw some nice artwork that we have no place for. We also had a bite to eat and a couple of tasty beers at Standing Stone Brewing Co. This morning we went back downtown for the Saturday farmers market, where we got some good bread, kale and a cucumber. We had been shopping at the excellent Co-op and a couple other grocery stores a few days ago so didn’t need a lot, but they had some good looking produce, breads and pastries. 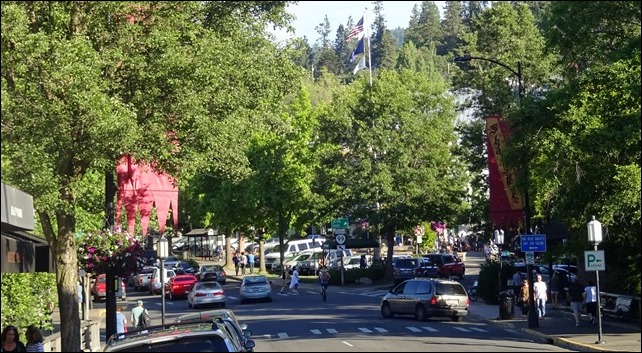 We really like what we’ve seen of Ashland, with its green rolling hills, tree-lined streets with deer roaming around, and a vibrant downtown that always seems to be full of people. Within 25 miles or less you can be up in the higher mountains to escape the summer heat, or to ski in the winter. Tomorrow we’re planning a hike on Mt. Ashland. With temperatures nearing 100 in town I have a feeling we won’t be the only ones up there.