Another Week in Prescott

It was a busy second week in Prescott. We did several more hikes and several more happy hours at The Raven, met a popular blogger, and Jim managed to visit both an eye doctor and a dentist. Had a couple days of cold, rainy weather but it was a good excuse for laundry, a haircut, a movie, the gym, and a few other errands.

There are unlimited miles of trails all around Prescott. We hiked the trail to Granite Mountain in the late afternoon after it cleared up on one of the cold, dreary days so we didn’t go very far, but one day I would like to do the whole 4 miles to the top. It’s a beautiful area. 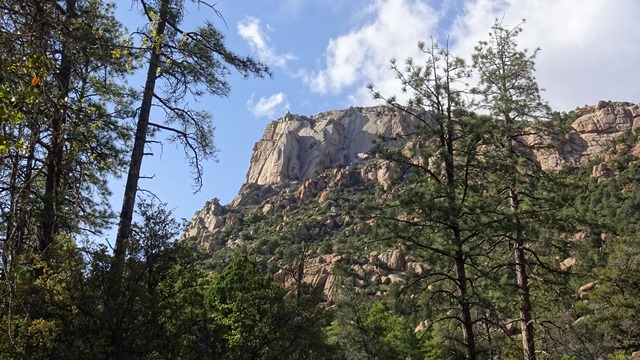 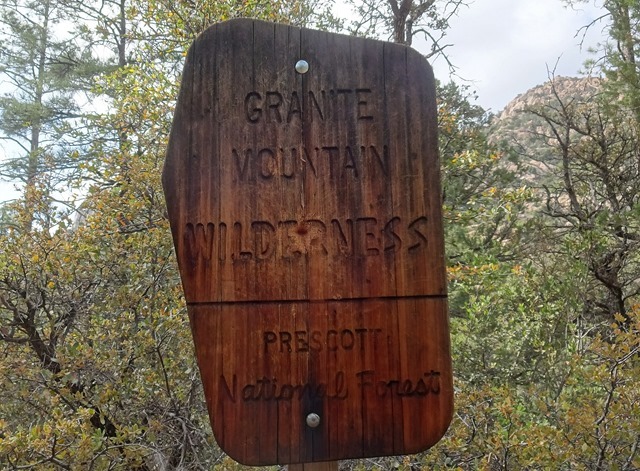 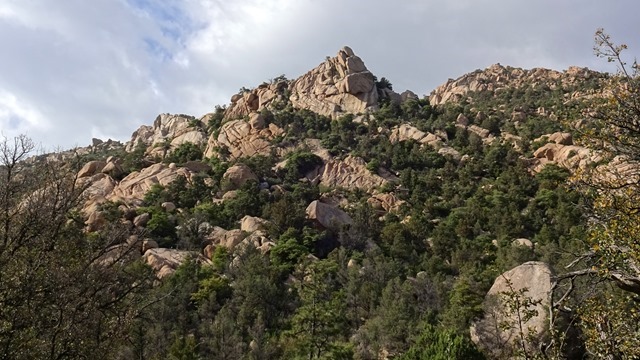 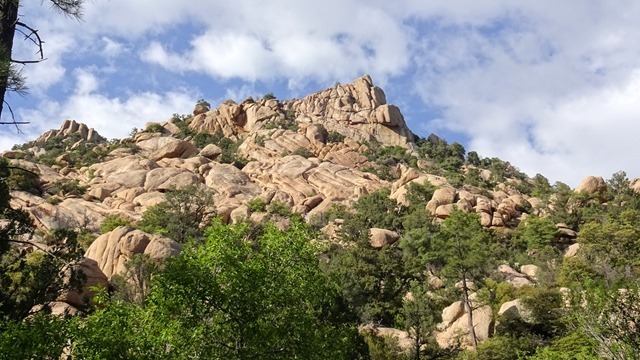 Back in early January Jim saw the eye doctor in Mesa who inserted dissolvable punctal plugs for his dry eyes. They are supposed to last 3-6 months, but a couple weeks ago he noticed his vision was fluctuating and his eyes felt more dry, so he found an optometrist in Prescott who checked and found that the plugs were no longer there. He inserted a different brand that are supposed to last 6 months, so time will tell.

On another cool, overcast day after the rain we joined Sandy for a hike in the Thumb Butte Recreation Area while John rode his bike. This time we crossed the road and took new trails for a nice loop. 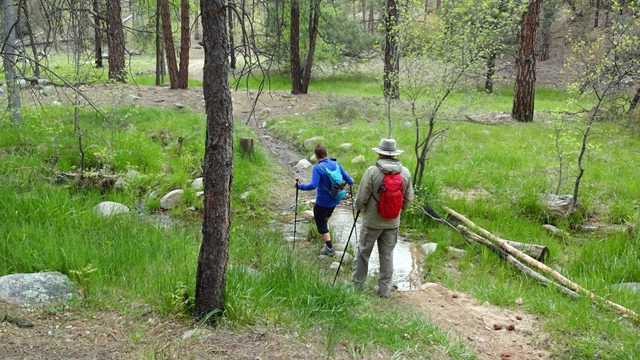 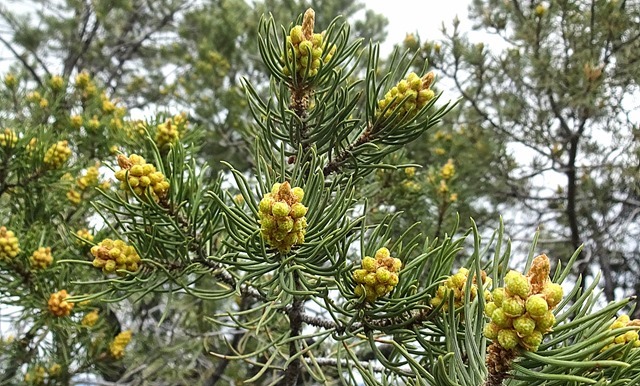 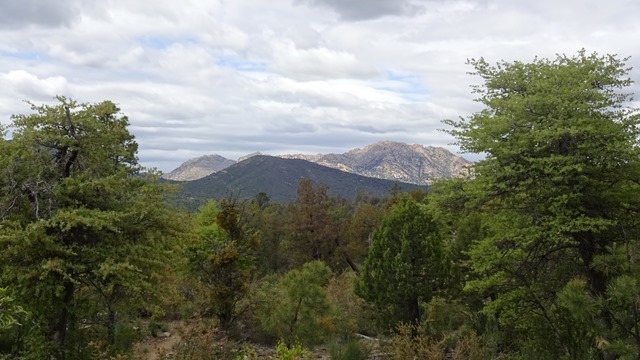 Thumb Butte is a great landmark that makes it hard to get lost. 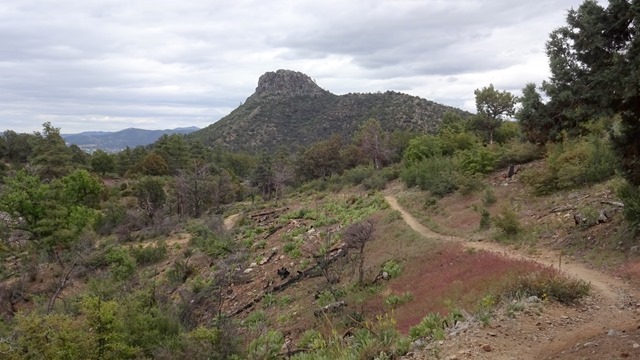 A hike along the shore of Willow Lake found the water level to be extremely high. 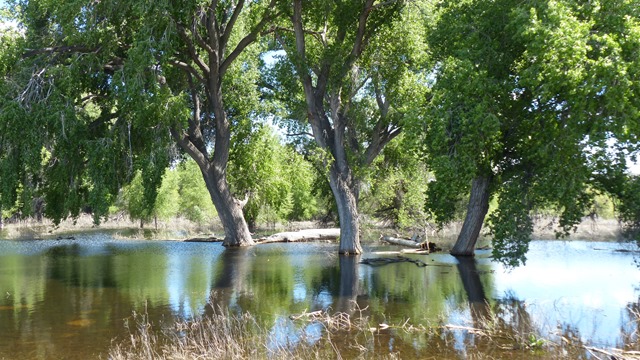 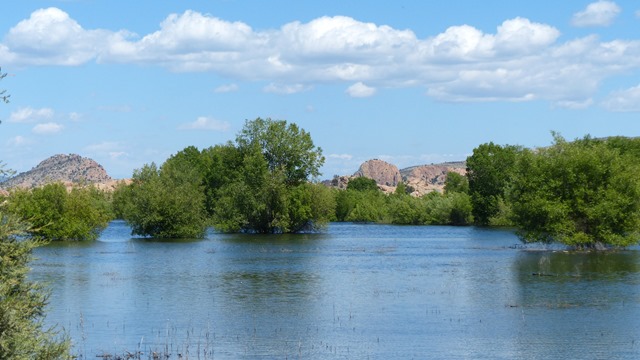 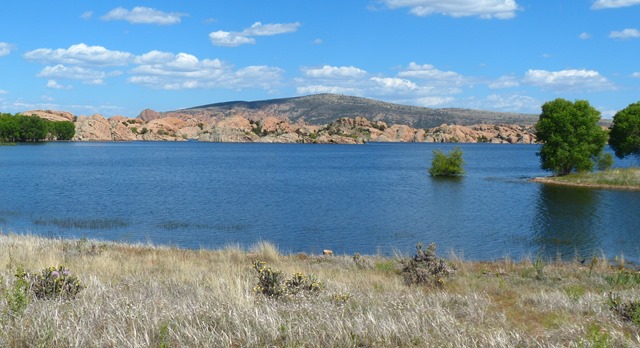 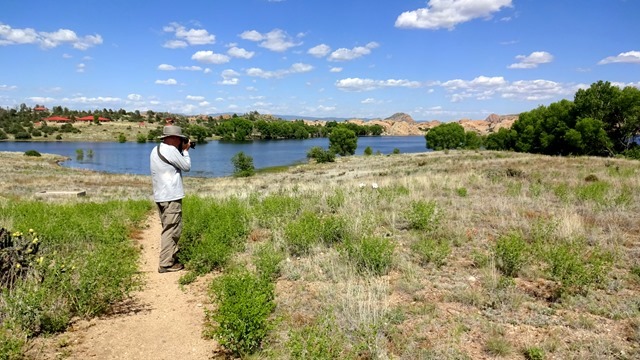 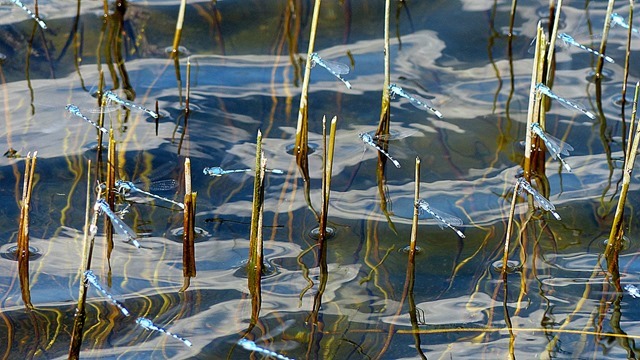 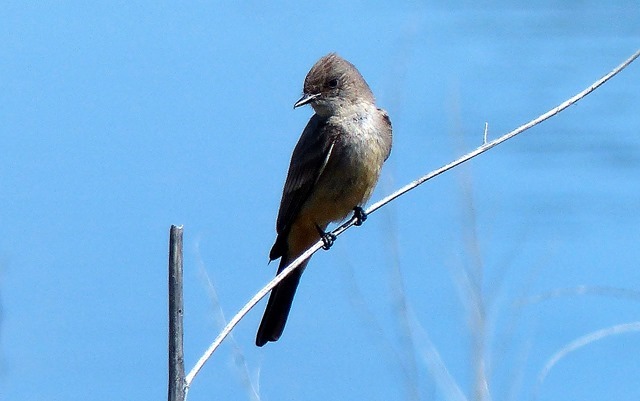 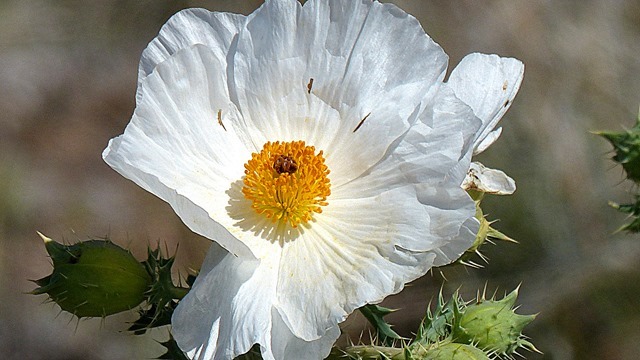 On Friday morning we took a hike across the road from our campground up the Prescott Circle trail to some great views of the mountains and surrounding homes in the hills. 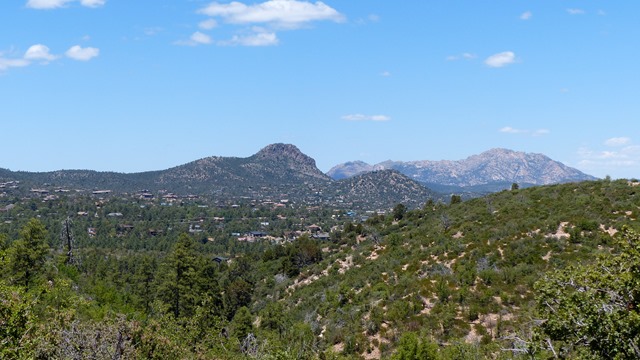 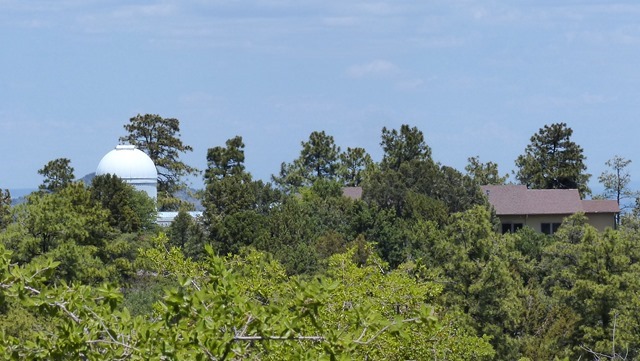 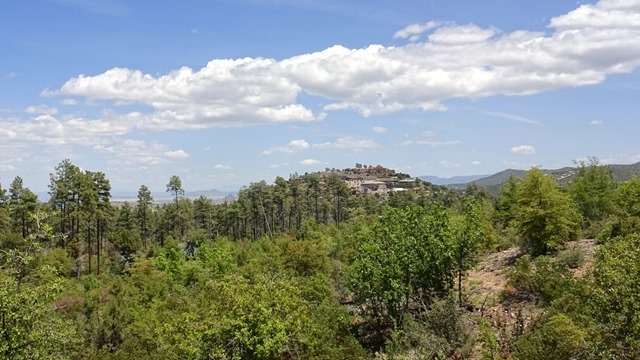 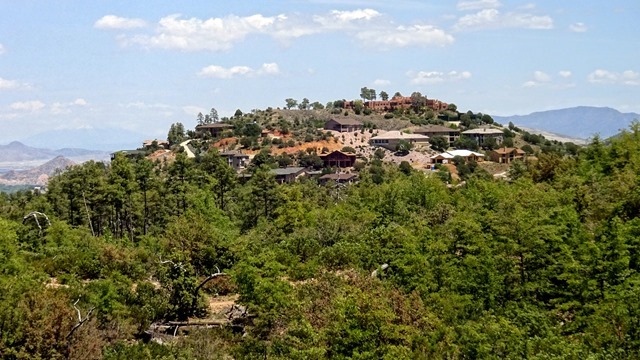 With the zoom on our camera and a bit of cropping I was able to get a good look at this building at the very top of the hill in the above photo, which we assumed is a hotel or condo. Yesterday we found the road going up and discovered that it is actually a private residence. Really hard to believe! 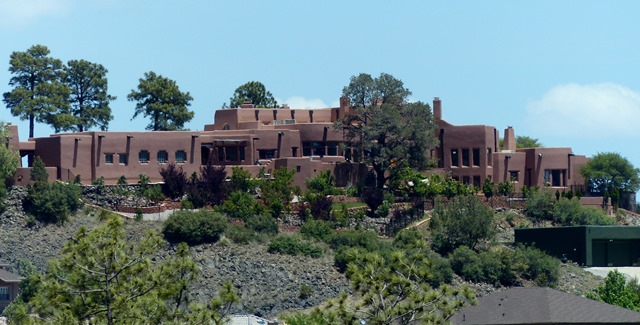 After our hike we showered and I went to town to check out some of the many thrift stores in Prescott. We were supposed to meet friends for happy hour at 4:30 so I told Jim I would be home by 4. While I was looking around in the first store my phone rang. It was Jim calling to tell me the abutment on his new implant was loose and he needed to go to the dentist. He found one office that was open on Friday afternoon, and they wanted him there at 4:30.

We texted everyone to see if we could postpone happy hour until closer to 5:30, which they agreed to, got in and out of the dentist office by a little after 5, and made it by 5:30. It was a quick fix, just a little tightening with a special tool and a $105 charge. The dentist said it’s not unusual for the abutments to come loose sometimes since they only hand tighten them on, and he told Jim to be less aggressive at brushing over it. He’s hoping it stays put until we get back to Yuma in the fall for the crown.

A few days earlier we discovered that John and Sandy’s site at the fairgrounds was right next to Al and Ingrid, from the blog Live Laugh RV. We had never met but followed each other’s blogs, so we set up a happy hour meeting for Friday. It was our 6th time at The Raven so you can tell we really like the place. Somehow I never took a photo any of the times we were there, so I had to borrow a couple from the web. 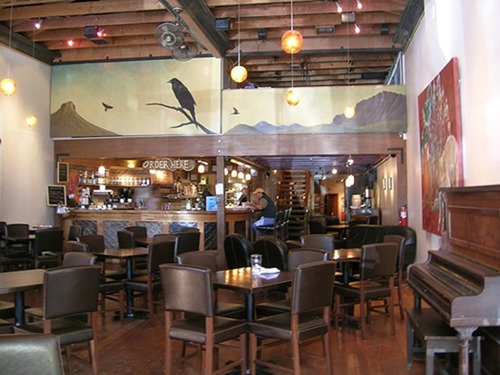 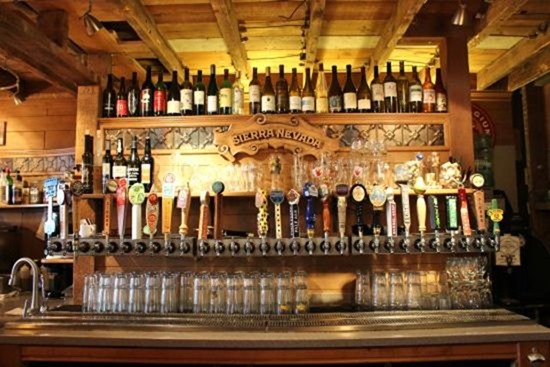 I did remember to take one at the Thai House Cafe where we ate dinner after. From the left are Jim, John, Sandy, Ingrid and Al. I caught Jim in a blink, he really didn’t drink that much beer! It was a great evening and always fun to meet up with other bloggers and fulltime RVers. 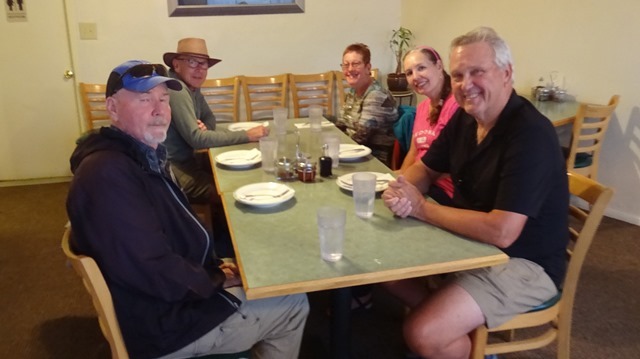 Yesterday we did one more hike with Eric and Maureen, this time leaving our car at Thumb Butte and riding with them in their truck to a trailhead near Granite Mountain. We hiked about 6 miles and were happy not to have to hike the 6 miles back. The large green leaves are a mullein plant, aka “miner’s toilet paper” according to Maureen. The leaves are very soft and fuzzy, but I read that it can be irritating to the skin so maybe not such a good idea to use as toilet paper unless you are desperate. 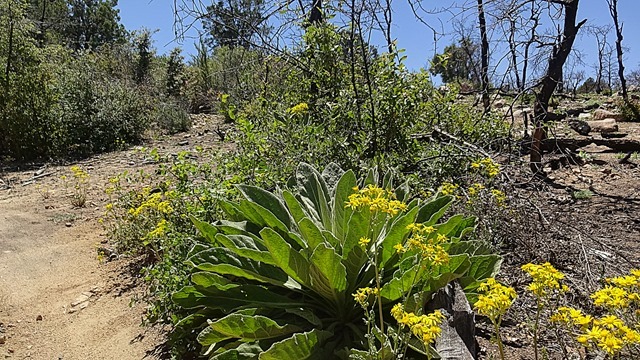 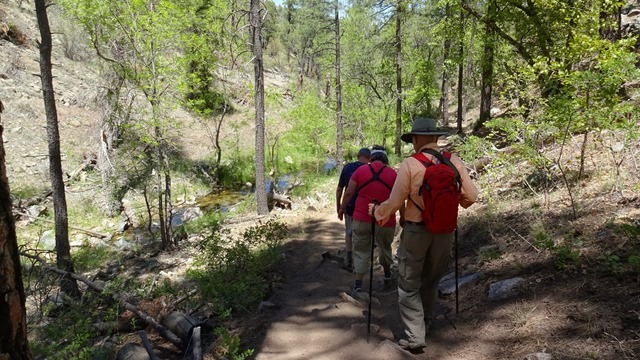 We really enjoyed our time in Prescott and I have a feeling we won’t wait another 4 years before coming here again. Today we’re moving on towards Sedona. It’s time for a red rock fix.