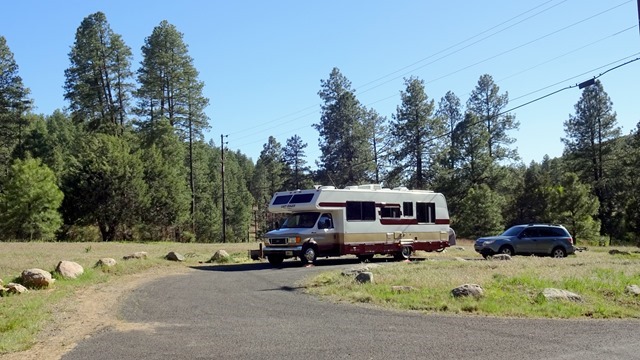 We are now at White Spar Campground in the Prescott National Forest, conveniently located just a couple miles south of downtown Prescott, AZ. On a recommendation from friends, on our way we first stopped to check out another forest service campground near Lynx Lake, Hilltop, which is about 10 miles from here, but there we no available long or level sites, which surprised us for being a Sunday afternoon. We thought there would be few people around, but soon learned that this is a very popular area. When we turned in to White Spar we saw an open pull-through site that Jim pulled into to unhook the car. Turns out we ended up taking it, as there were only a couple of other open sites we could have fit in, and they were very shady. You can’t even tell that there are other campers down the road from us for the trees. 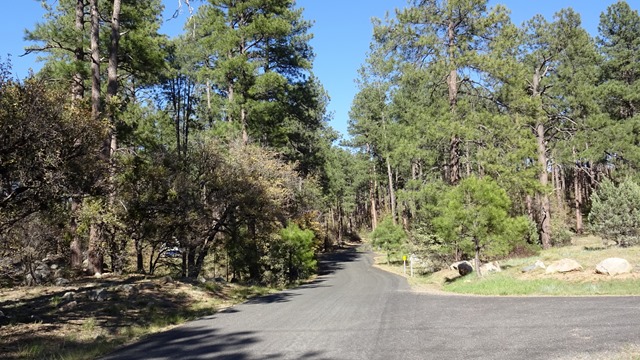 With temperatures in the 70s we would rather have full sun, and our backyard has trees we can sit under when we want shade. After spending so many months in the desert it is always culture shock for us to be back in the forest. There are no hookups or dump, but there are numerous water spigots and very clean vault toilets. Not bad for $7 with the senior pass. 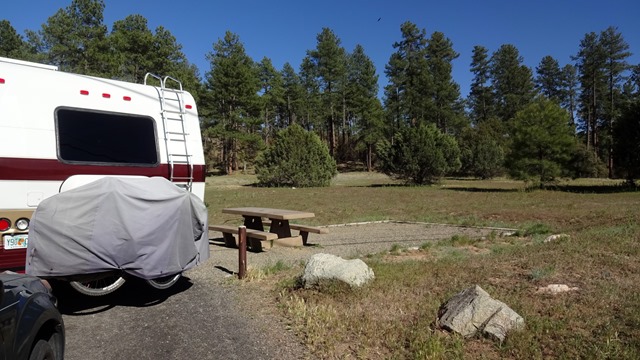 For some odd reason, on the drive to Prescott, the bathroom door and Jim’s closet would not stay closed, so Jim worked on adjusting those after we arrived. The shower door latch had broken the day before, but that required a new part, so on Monday we went to an RV dealer to get a new latch, and since we were very close to Watson Lake, we had to stop and take a hike. 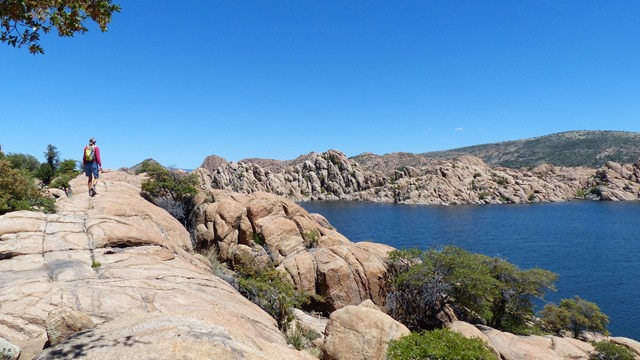 This is part of an area called the Granite Dells, beautiful rock formations in and surrounding the lake. We were here once before in June of 2013 for a Lazy Daze get-together at the fairgrounds, but it was in the 90s so we just took a very short walk to look at the lake. This time we put in a few more miles on the trail that goes around it.

Watson Lake is one of two reservoirs in the Granite Dells that was formed in the early 1900s when the Chino Valley Irrigation District built a dam on Granite Creek. The City of Prescott bought the reservoir and surrounding land in 1997 to preserve it as a recreational area. 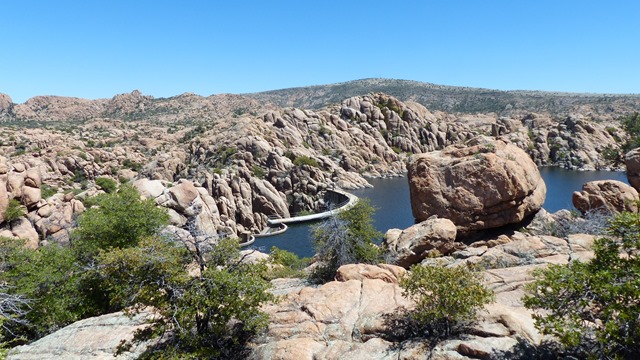 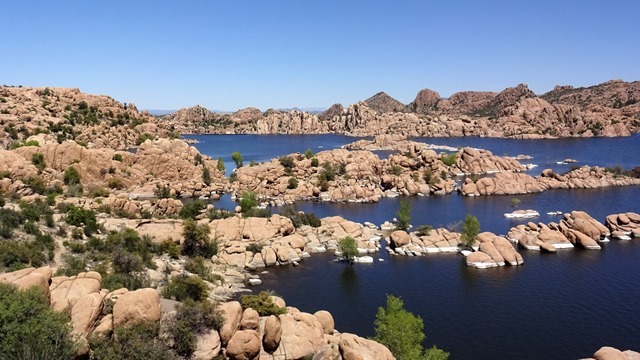 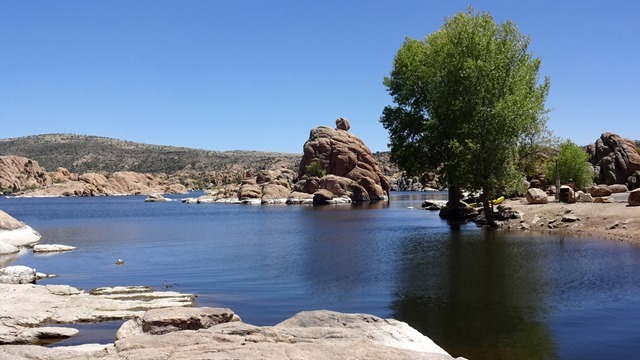 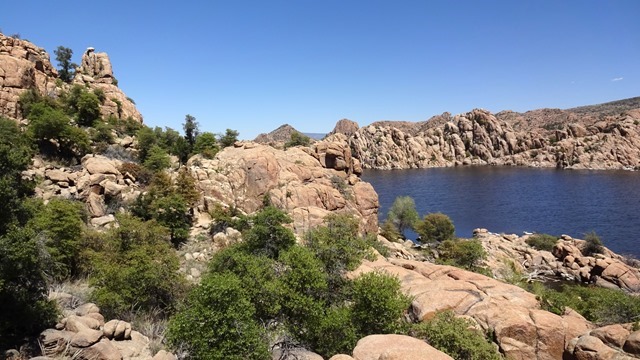 It’s a fun trail, with much of it being on rock marked with white dots. Of course you can also just wander around anywhere over the rocks. 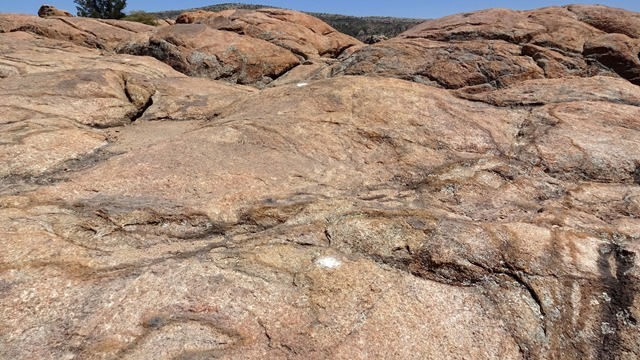 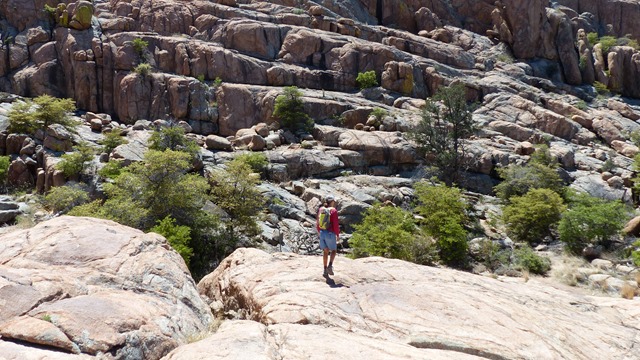 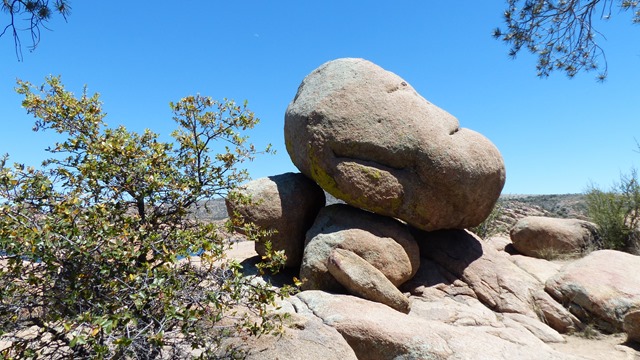 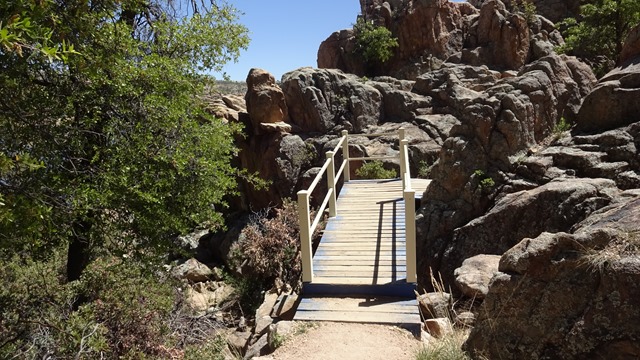 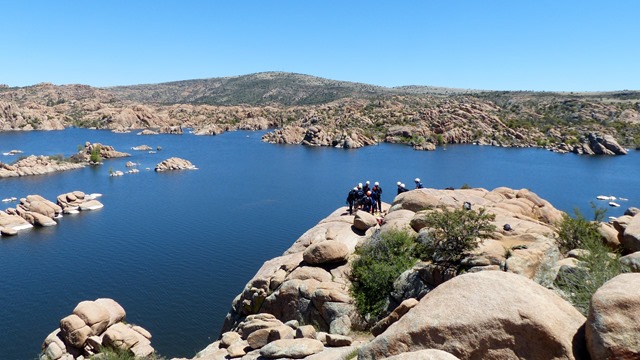 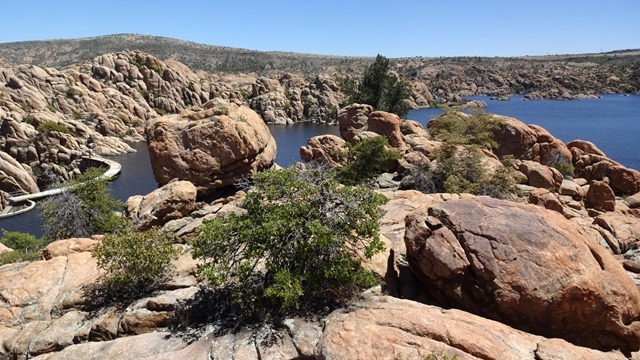 After we got back Monday afternoon, friends Eric and Maureen came by for happy hour. They are former world travelers and fulltime RVers who settled in Prescott over three years ago. Yesterday they took us on a hike to an overlook in the Thumb Butte Recreation Area, just a few miles from town.

Thumb Butte. We opted not to scramble to the top. 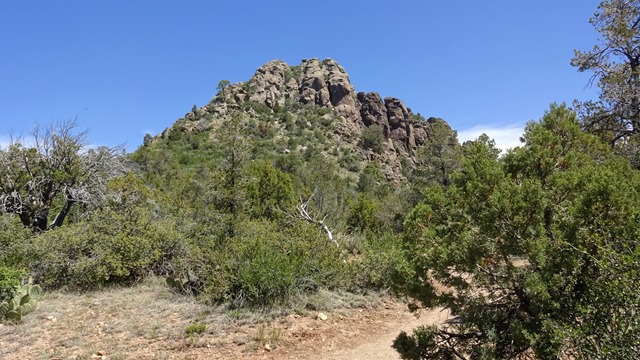 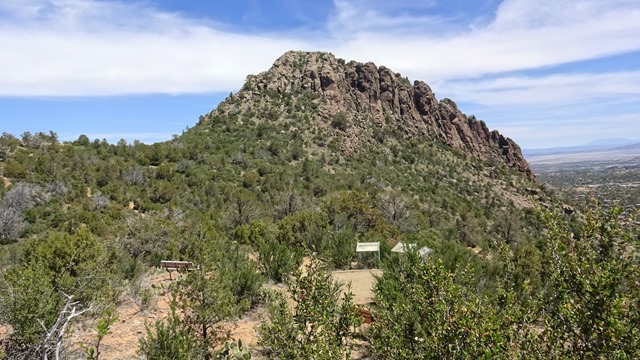 Nice views from the overlook. 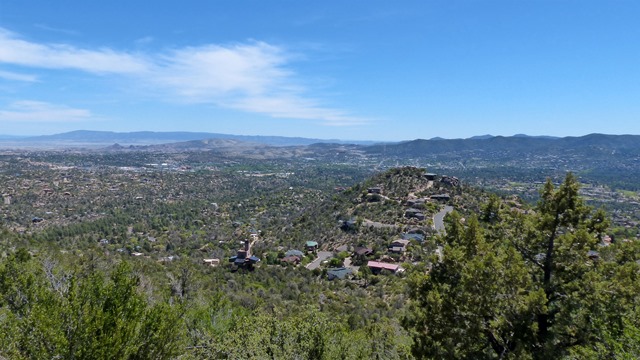 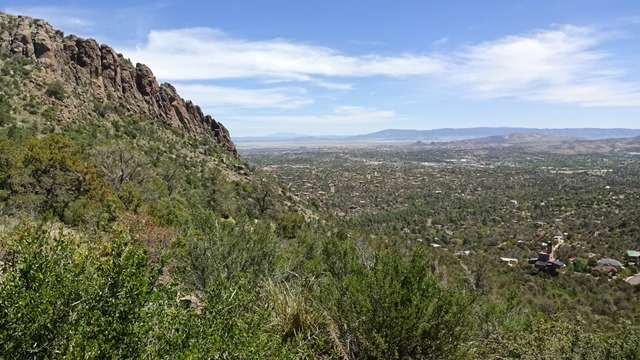 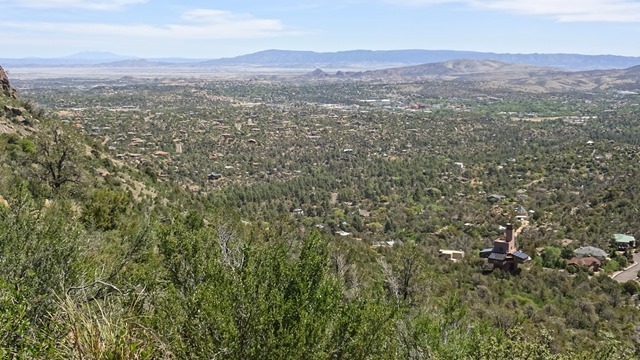 A closer look at this unique looking house. 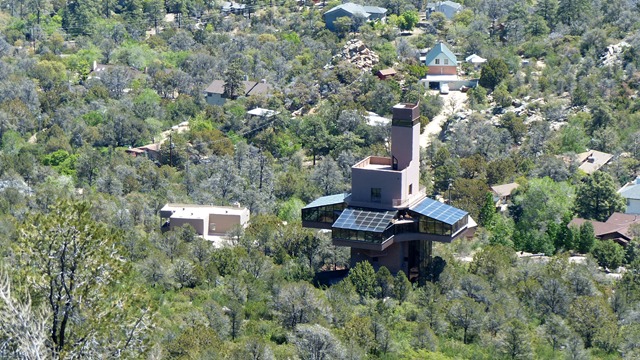 It happens to be for sale, if anyone is interested. Here is the link to Sotheby’s. 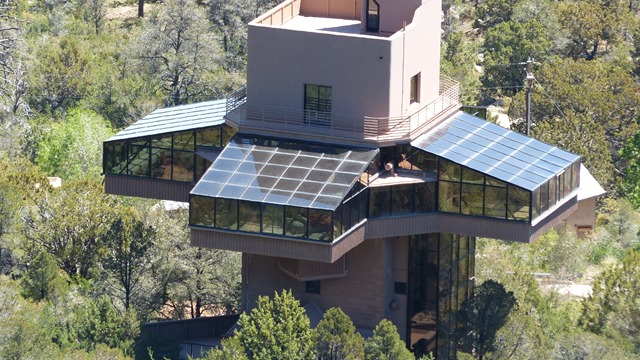 From there we drove the rest of the Thumb Butte loop road back to downtown Prescott. There are some nice dispersed campsites along the way, but the dirt road was definitely too rutted for the Lazy Daze.

Eric, Maureen, and Jim at the overlook. 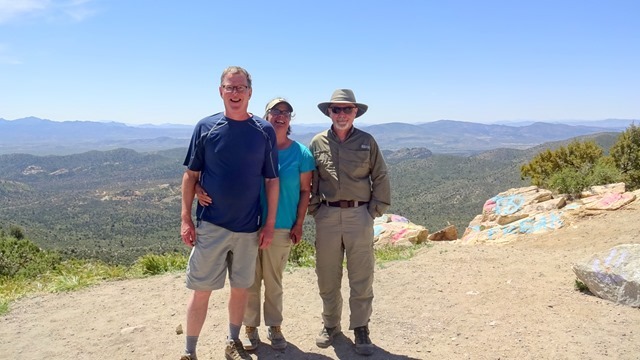 Searching for an elusive geocache that was a bit too close to the edge for me. 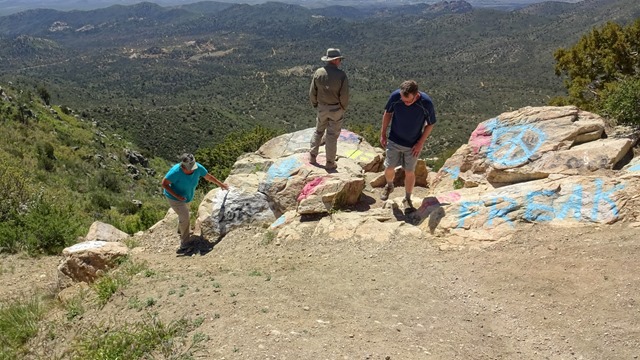 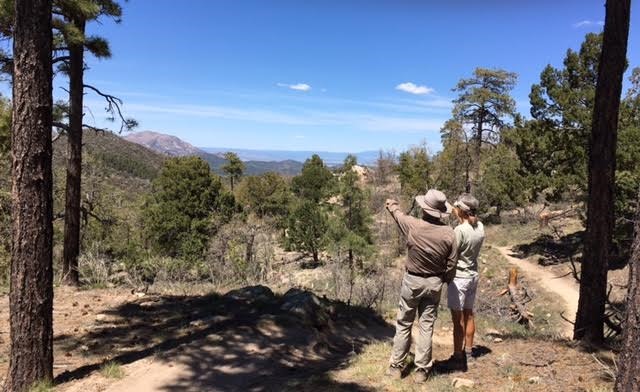 Where we came across this strange effigy leaning on an alligator juniper. 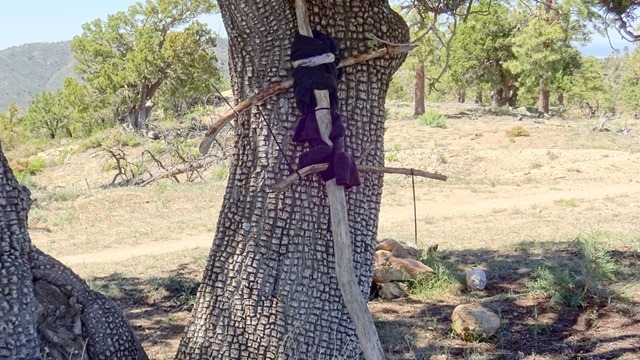 We saw an abundance of acorn woodpeckers doing their thing on dead trees. 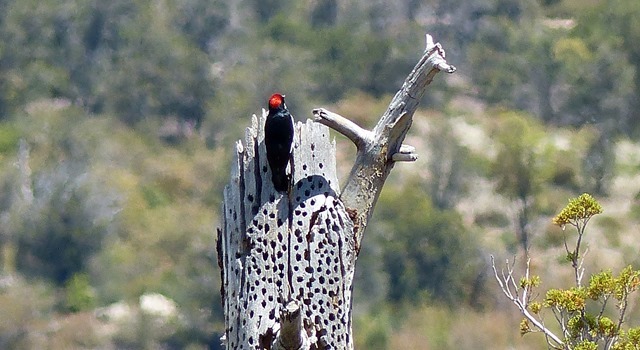 Our pleasant day was capped off the day with a stop downtown at Perregrine Book Co, a very nice locally owned bookstore, followed by some great beer at the Raven Cafe. 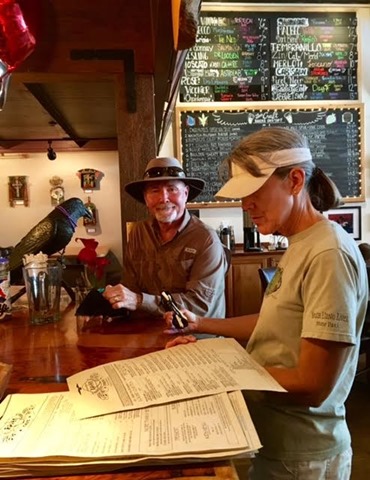 I loved the Freak’N Sec Double IPA, and with 30 beers on tap everyone found something to their liking. At half off happy hour prices I have a feeling we’ll be going back again soon.