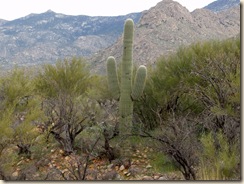 Arrived at Catalina State Park near Tucson on Sunday. It has been quite a week so far. We were fortunate to get the last 2 sites but ours was a pull-thru right on the road. We had a great view of the mountains, though. We kept seeing these big rigs going by very close and Jim kept stressing about getting hit. Yesterday he went to the hardware store and I heard and felt a crunch, and sure enough some idiot who was moving from the non-electric area into an electric site left his awning out and it hit the back of our rig.  Broke the upper left light cover and put a big scratch on the roof. Jim was real happy when he got  back but it was probably better that I was home alone when it happened. The guy felt terrible and later that day brought us a replacement lens cover. Jim was able to polish out most of the scratch, so all is well. Since our group get together started today, we asked the ranger if we could just move to the group area yesterday, and they let us.  Had a nice quiet evening by ourselves. 20 Lazy Daze have shown up so far and at least one more is expected tomorrow.  Had a  group happy hour tonight, which was fun.  This is before the other rigs arrived. 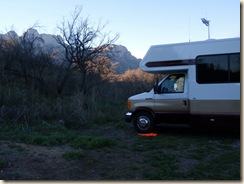 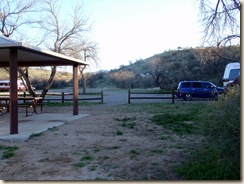 Unfortunately Jim was unable to join us because he had a tooth extracted today, the same one that’s been bothering him for months now.  In fact, he went back to the dentist in Pensacola when we were there for a few days in November but they couldn’ t see a problem. It resolved but has continued to bother him off and on since. He noticed his gum was sore on Sunday and sure enough there was an abcess. Our friend happened to have a bunch of Amoxicillin she bought in Mexico so he started taking that  and got an appointment with an endodontist Monday.  Thought he was going to need a root canal. Unfortunately, the endodontist saw a root fracture on the x-ray and said a root canal would not work. So he sent him to an oral surgeon for an extraction today. He survived, and the good news is there is plenty of bone left so he is a good candidate for an implant. He hasn’t decided for sure to do that instead of a bridge but we may come back to Tucson in a couple months so he can have it done by the same guy. Then it would be several more months before the permanent crown could be put on, which he can have done elsewhere.  He is feeling better this evening, so hopefully the worst is over.

We have done a little hiking and biking here and hope to do more this week. This is Jim trying to avoid getting his picture taken. 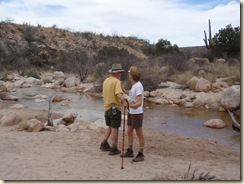 It is a beautiful area, the first time we’ve seen the Saguaro cactus. They are quite impressive. 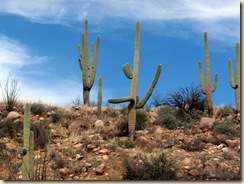 Tucson seem like a nice city. Traffic isn’t too bad and it is very scenic with the mountains so close. Hope the rest of our visit here is a little more pleasant.  Jim will be back to the blog as soon as he’s feeling better.