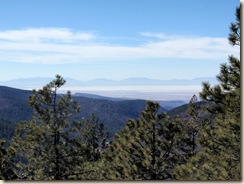 Drove up the mountain to Cloudcroft on Thursday and again today to do some hiking.  Lots of trails around the area in the Lincoln National Forest. The 16 miles up and down the mountain was much less frightening in the car. We got to appreciate the views a lot more than when we arrived in the RV.  Cloudcroft is a neat little resort town. There is skiing in the winter and it’s popular in the summer because of the cool temperatures at 8600’ elevation. 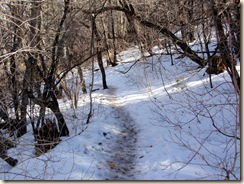 The first trail we hiked was really nice for awhile but then as we got deeper in the woods and out of the sun it was covered with snow and ice. Since I grew up in the snow in Erie, Pa I didn’t think it would be too bad but it was slick and icy. We tried to walk for a ways but at one point I was on my butt sliding down the trail, and then on my knees at another point. Jim managed to stay on his feet but as conditions weren’t improving we decided to turn around. Of course that meant going back uphill on the ice. It was a relief to get back without any broken bones.

Today’s hike was better.  We hiked along an old rail bed and there was a little snow but it was mushy since the temperatures were warmer the last couple days. 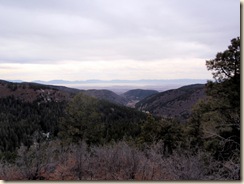 Had another beautiful sunset when we got back. And the moon was rising over the mountain in the east. Pretty spectacular. 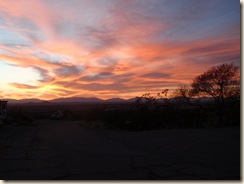 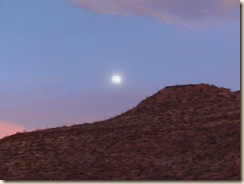 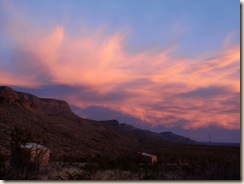 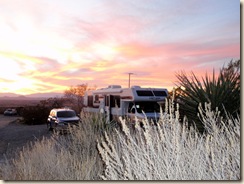 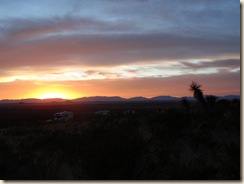 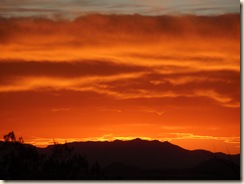 Tomorrow we’re off to Las Cruces for a night to do some shopping and banking and then on our way to Rockhound State Park near Demming. Hard to believe another week has gone by. We’ve been on the road exactly 4 months now and  the time has flown by.  And neither of us has filed for divorce yet!