Jack Got the Better of Jim

While we were at Eagle Nest Lake, NM, we noticed our neighbor had a sleek looking TV antenna on his trailer. Jim talked to him about it, and how difficult it was to install (Wayne did it himself), so he and Debbie decided we needed to get rid of our old rattling batwing antennas and get a Jack. 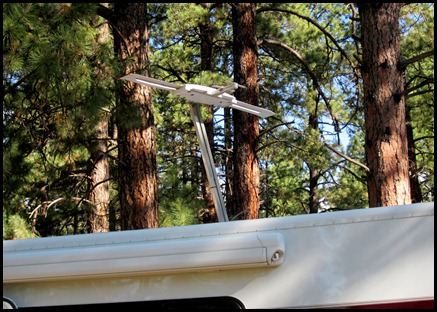 We ordered a couple from PPL, who had the best price, and they were delivered last week at Herron Lake. Jim does not have a good history with do-it-yourself projects, but he found some You Tube videos and studied the installation instructions carefully. On Monday he and Debbie decided to work on hers first, since her roof had more shade, so up they went. Since I can’t work up the courage to climb the ladder and get on the roof, I was the gofer. 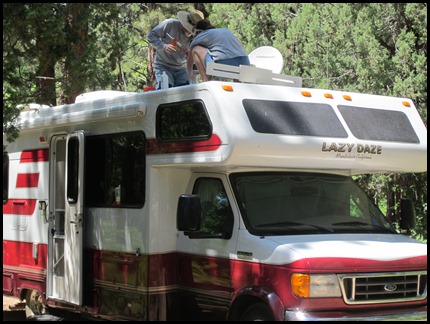 For those of you who are not familiar with Lazy Daze, they have a reputation for building a quality motorhome at a reasonable price. If you ever try to remove or replace anything the factory installed, the most difficult part is getting off all the screws, nails, glue and caulk they use. This turned out to be the hardest part of the job, since the old antenna was not only screwed down to a piece of wood under the aluminum roof, but it was glued and caulked extremely well. It took them much scraping and heating the adhesive with a hair dryer before the old antenna mount would come off. And to make it even more fun, it had the consistency and stickiness of taffy, which got all over their tools, clothes, and hands. At this point Jim told me he was sending the other one back and keeping what we had. Our neighbors with kids probably didn’t appreciate the obscenities bouncing off the roof, either.

Prying up the old mount. 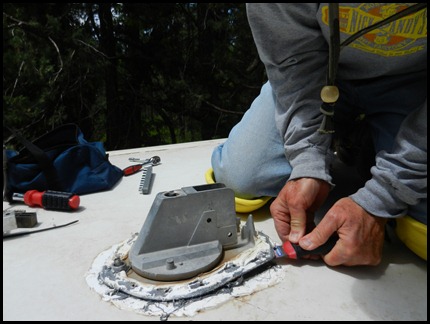 Now all this glue had to be removed. 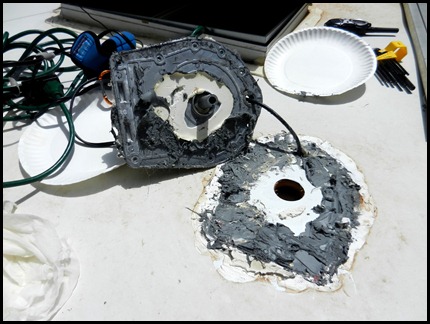 Luckily, we had some Lift Off adhesive remover, which worked fairly well. 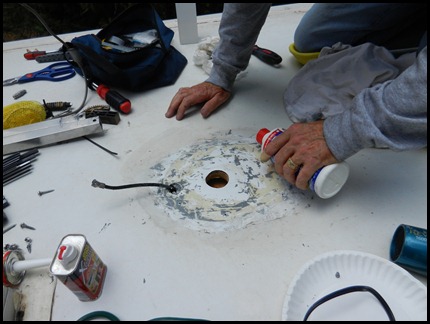 Fast forward a few more hours, after a break for lunch, and the new Jack antenna is nicely installed on Debbie’s roof. If anyone is interested in trying this themselves, just email Jim for more details. I didn’t even have to make a trip to the hardware store, just borrowed some bigger drill bits from the camp host, which they didn’t end up using anyway, so I had the easy job.

The nice thing about the Jack is you don’t have to raise and lower it, so that’s one less thing to think about when getting ready to leave. Also there is a built in signal finder with cute little LED lights so you can easily see which direction the antenna needs to point to get the best signal. And the ceiling mount is nice looking. 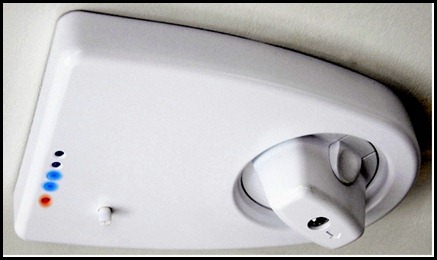 I thought a nice dinner out and lots of beer would help Jim’s spirits after this long, trying day, so we went to downtown Durango to the Steamworks Brewing Co. Although we had to wait about 20 minutes for a table and the service wasn’t the best, the beer was excellent, and our Quinoa burgers and garlic-rosemary potato mash was so good we may have to go back again while we’re here.

Our table with a view of the brewery. 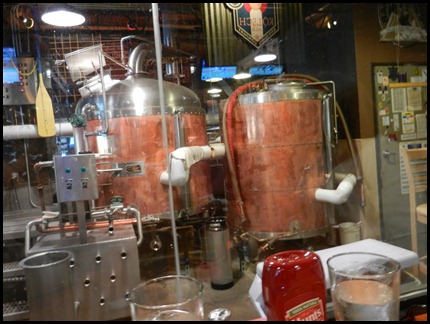 After a half pitcher of Backside Stout, Jim was reconsidering sending back the other antenna. I think he will tackle ours after a few days of rest, since Debbie is willing, and now they know exactly what they are getting into.

The finished product on left with it’s sleek profile. They did good! 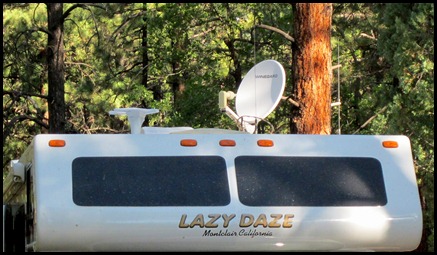