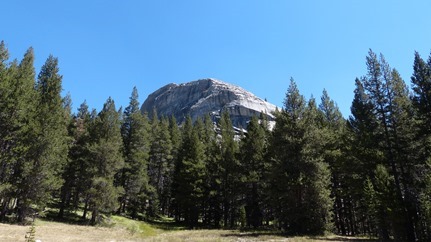 We knew we couldn’t top the 20 Lakes Basin hike, at least as far as a hike to scenic alpine lakes is concerned, so there was no point in trying. Next we returned to Yosemite and Lembert’s Dome, this time dragging Debbie up a longer but not as steep two mile trail to the dome. It was every bit as much fun the second time around.

On the way we got to watch this guy for a good while. He wasn’t too concerned about us. 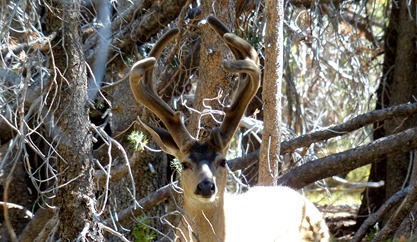 We were the only people on top of the dome when we first got there. We sat and admired the views for a while before a woman made it up and took our picture. 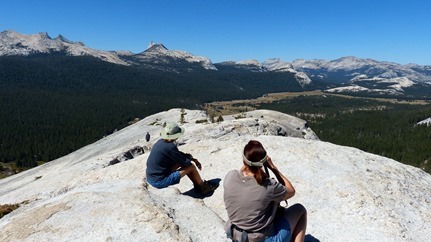 Hold on to your hat, it’s very windy up there. 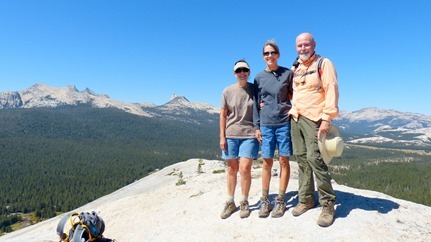 Jim and I were so glad we did this hike again, and Debbie liked it, too. After the climb up, that is. 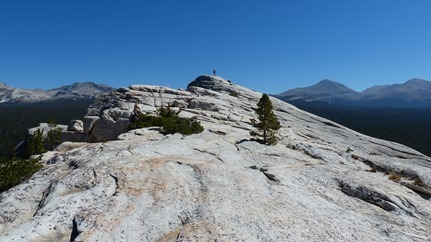 On another day we decided to check out Panum Crater, which is a plug dome, a two stage volcano with an outer pumice rim and an inner core of jagged obsidian layered with pumice. The first time we went it was very hazy and not good for photography. We enjoyed wandering around it so much we went back again yesterday, did both the rim trail and hiked to the plug.

It doesn’t look like much from the parking area. 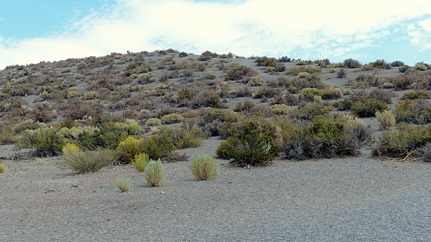 But at the top of the hill the rocks in the plug come into view. 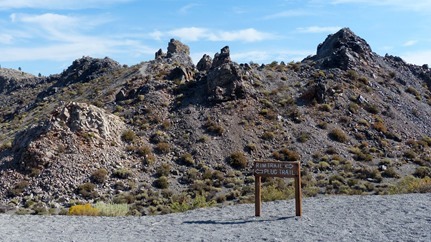 You can hike around the entire rim, about a mile and a half. 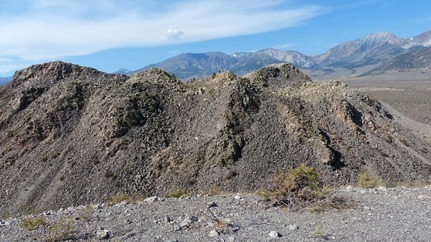 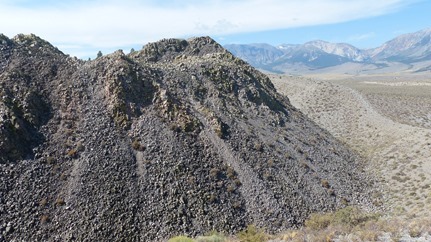 The rim trail affords some nice views of Mono Lake. 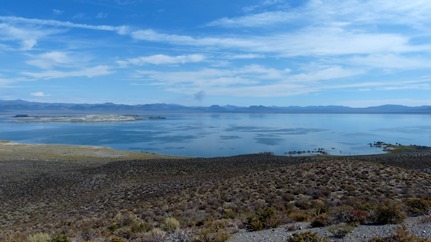 We then intersected the steep, sandy switchback trail up to the plug. It’s not every day you get to walk inside a volcano. It last erupted about 650 years ago and is now considered dormant. 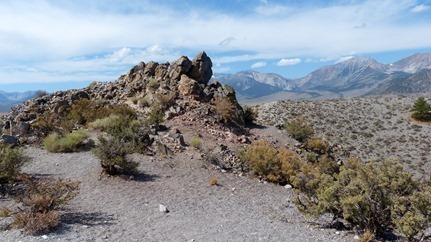 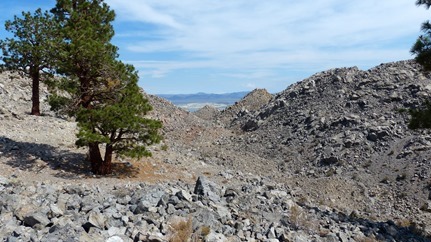 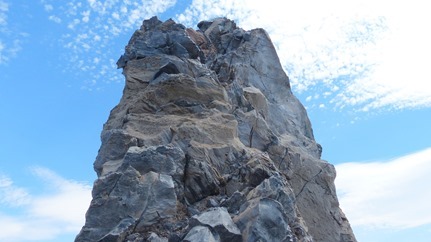 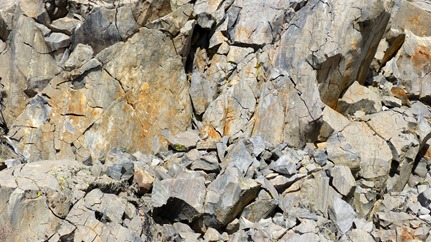 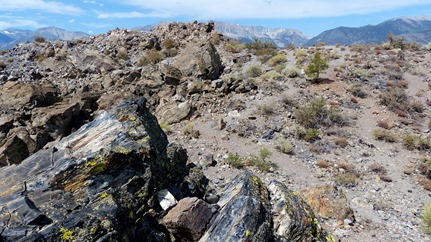 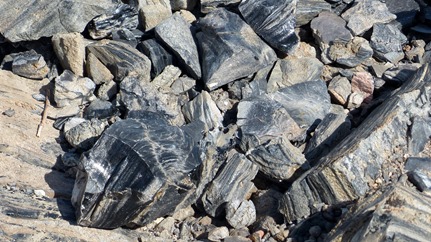 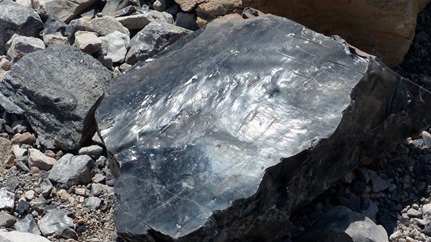 Another day Debbie and I went to the Mono Lake bird walk. Jim finds bird walks a little too boring, especially at eight in the morning. We saw lots of birds, if we could only remember them. I took both the camera and binoculars, but didn’t take many photos. 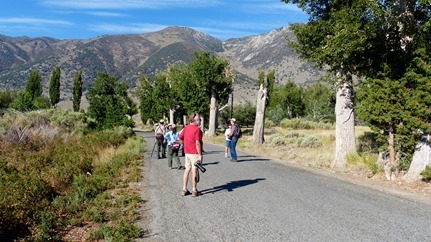 In the woods we saw towhees, a hairy woodpecker, scrub jays and warblers. On the water we saw plenty of gulls, a few Wilson’s phalaropes, osprey, and the ranger estimated close to a thousand American avocets. He was great at bird calls, and said he also imitated people. He was low key but funny, and made an enjoyable leader. 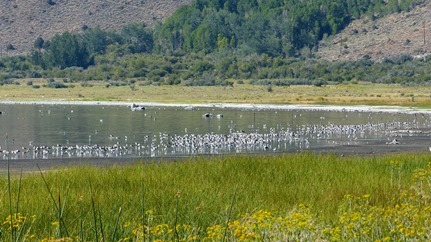 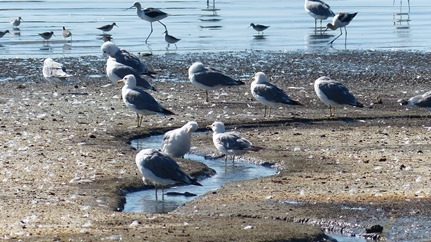 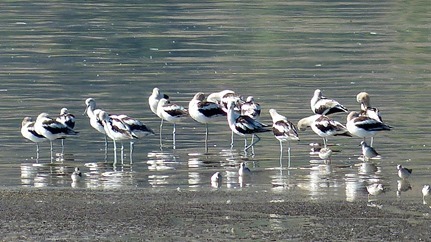 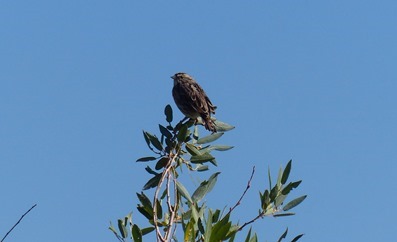 There were also a few eared grebes in the water, and I didn’t realized they are strictly aquatic birds. The ranger told us after heavy rains they will sometimes find them alongside wet roads, as they landed there thinking the road was a body of water. He said when they find them like that they just pick them up and take them to the lake.

Not a bird, but I liked this chipmunk sitting on top of the tufa. 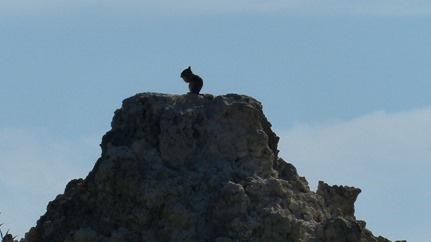 We plan to hang around here until next week as there are still a couple hikes in or near Yosemite we would like to do. A few people recommended visiting the ghost town, Bodie, about 20 miles from here. We talked about going some time this week but unfortunately the park is closed as of yesterday due to a lightning sparked wild fire that started on Saturday and has burned over 14,000 acres just 3 miles from Bodie. We have a good view of the smoke, but luckily so far the wind is keeping it away. 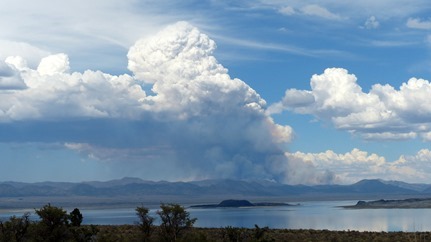